2010 was a reckoning. It was a year that saw the gaming market explode with a bevy of independently produced titles. In forgotten scenes reminiscent of the “bedroom programming” days of the late-’80s/early-’90s, talented coders from around the world bombarded PC and console stores with a slew of excellent, home-grown video games, reigniting a fire in the indie development scene that burns brightly to this day.

The decade began with the arrival of legendary titles such as PlayDead’s Limbo, Terry Cavanagh’s VVVVVV, Rodain Joubert’s Desktop Dungeons, oh, and a little block-building jaunt by the name of Minecraft… what happened to this latter release we’ll never know. But perhaps no one title is more closely associated with the modern-day indie game boom than Team Meat’s tough-as-nails platformer, Super Meat Boy.

As chronicled in 2012 documentary Indie Game: The Movie, Super Meat Boy was a labor of love for two friends – Edmund McMillen and Tommy Refenes – who worked tirelessly to create a twitchy, complex, and wryly comic adventure, embracing the skill-based gameplay and relentless difficulty of games’ past. Super Meat Boy launched to much-deserved success, shifting over a million copies in its first two years of release. More importantly, it inspired a generation of wannabe developers – establishing the belief that in the big bucks world of modern gaming there was definitely still room for “the little guy”.

And now, over a decade later, Team Meat (now sans Ed McMillen) has returned with long-awaited sequel Super Meat Boy Forever. So take a deep breath and prepare to get those finger cramps all over again. It has taken some years but – finally – the Buzz is Back. 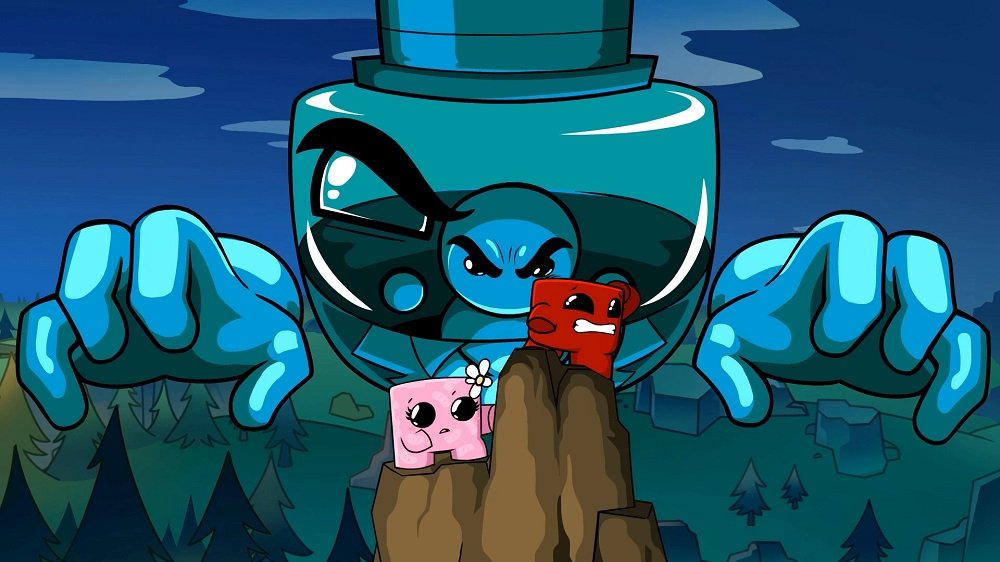 In the aftermath of their previous adventure, Meat Boy and Bandage Girl have settled into a comfortable life together in Chipperville. Not only that, but they have welcomed a slimy blob of joy into their lives: their adorable, cuddly, and perfectly square child, Nugget. This peaceful life is shattered, however, with the return of the nefarious Dr. Fetus, still pissed at the Meat Family for throwing a buzzsaw blade into his evil machinations. In retaliation, the bird-flipping maniac swoops during a family picnic, whisking away little Nugget in an evil plot that – given the child’s penchant for wholesome mischief – he may live to regret.

So begins Super Meat Boy Forever, the follow-up to Team Meat’s award-winning, mega-selling, and industry-changing platformer that ruined many controllers and an equal amount of finger joints. Ironically, your current controller of choice can rest easy, as this long-awaited sequel is operated by little more than a single button and a few swift taps of the D-pad. You see, for better or worse, Super Meat Boy Forever takes an entirely different tack to its predecessor, transitioning to that staple of mobile gaming: the auto-runner.

Completely overhauling the core style of SMB, Forever instead sees our heroes (Meat Boy, Bandage Girl, or a plethora of unlockable characters) barrelling headlong into danger, with players only having control over jumps, slides, and an array of baddie-bashing attacks such as powerful jump-punches and dive-kicks. Other than that, it’s pedal-to-the-metal, full-steam-ahead action, calling upon lightning-quick reactions and split-second timing in order to keep our plucky protagonists from meeting a sticky end… which they will… a lot.

In addition to the simplified auto-running mechanic, Super Meat Boy Forever also features a form of procedural generation, with each stage comprised of several small “chunks” stitched together from a staggering pool of over 7000 set pieces to create a gauntlet of death. As such, every SMBF player will receive their own bespoke worlds, (though these are shareable via seed codes). The number of stages, stage length, and boss battles remain universal, but each player’s course will likely be totally different in layout from that of their pals.

Let’s address this immediately: All of the above will be polarizing among players… and with good cause. 10 years into its lifespan, Super Meat Boy is a title still played almost religiously by the fanbase – who continue to pick through each and every screen shaving off precious seconds, sharing techniques, and uncovering secrets, characters, and routes. By its very nature, Forever might struggle to share this sense of community longevity, given its procedurally generated worlds and its simplified control scheme. While SMBF is definitely challenging, it’s inarguable that the auto-runner mechanic lessens the required technical dexterity, narrowing the margin for experimentation and reducing overall satisfaction as a result.

While the new jigsaw-style stages remain tough, even exhilarating, more often than not success in SMBF feels like a matter of trial-and-error. Not implemented in the same sense of the original SMB, where a player must plot and then execute a safe path through a hazard-filled environment, but by forcing our hero to charge headlong into strings of unseen obstacles, thrown at the player courtesy of SMBF‘s speed-scrolling nature. Jump the saw. Dead. Try to jump earlier. Dead. Try to jump later. Cleared. Landed too early. Dead.

While Super Meat Boy offered breathing space with which to plot a plan of action, resulting in a satisfying route to single-life completion, SMBF has sections that simply necessitate multiple deaths to negotiate, with the auto-run mechanic irritatingly forcing the player run repeatedly into a wall until they learn the correct course of action “live”. Super Meat Boy was torturous, yet fair, SMBF‘s non-stop mentality simply robs you of lives, resulting in the one thing that was missing from the original: moments of sighing exasperation. 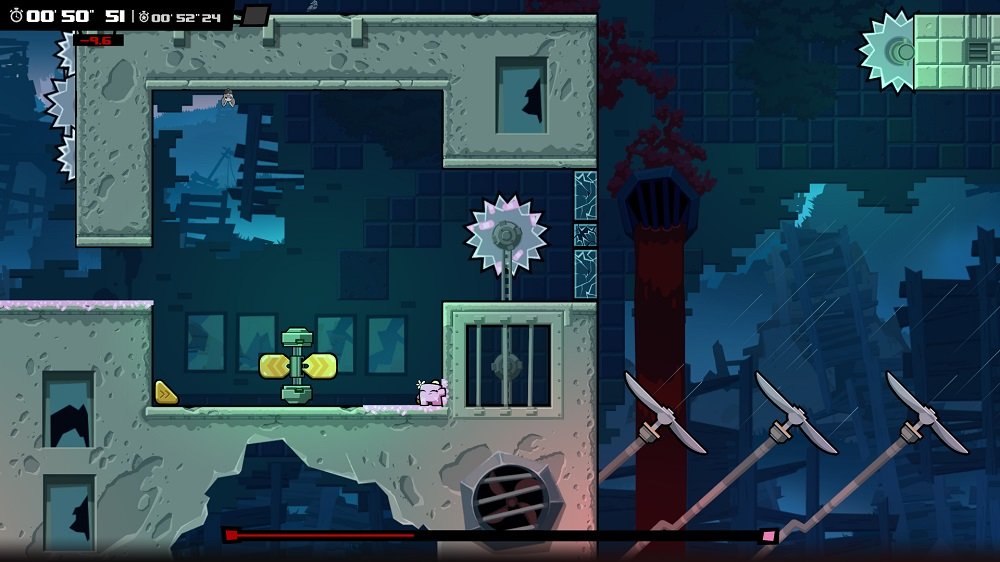 Now, this is not to say that Super Meat Boy Forever doesn’t offer an exciting or enjoyable experience. When the “chunks” align well, the player can enjoy fast, smart, and satisfying dashes through SMBF‘s twisted death circus. Welcome new mechanics – like punchable switches, pulley systems, and teleport pipes – fit perfectly into the SMB universe. Others, like a bizarre “Time to Death” system in the second chapter, are out of place in the franchise and perhaps should’ve been dropped entirely.

One standout feature are Super Meat Boy Forever‘s inventive boss fights, creative encounters that are smartly designed and offer a lot of satisfaction when surmounted. It is in moments such as these – and specifically formed world chunks – where SMBF comes to life, offering breathless-but-fair gameplay based around planning and execution, rather than the pressing of a single button and the repetition of missing your specifically designated jumping-off point again and again.

Super Meat Boy Forever‘s ace lies with its brilliant visuals, offering an attractive world given life through beautifully animated character models. Despite their simplistic designs, Meat Boy, Bandage Girl, and a gallery of enemies old and new are all bursting with personality, while each stage features a vibrant aesthetic, building toward an awesome final chapter which is one of the series’ best. It also wouldn’t be Super Meat Boy without a slew of animated cutscenes, with SMBF afforded well-directed cinematics peppered with dark humor, nostalgic references, and a clever blend of heartfelt drama and total farce. While some players might be disappointed at Forever‘s gameplay direction, the Super Meat Boy design is unmistakable and as magnetic as ever. In contrast, while Ridiculon’s soundtrack is serviceable, the loss of original composer Danny Baranowsky is readily apparent.

There’s also practically no feces. Anywhere. There’s like, one single poo. Funny that. 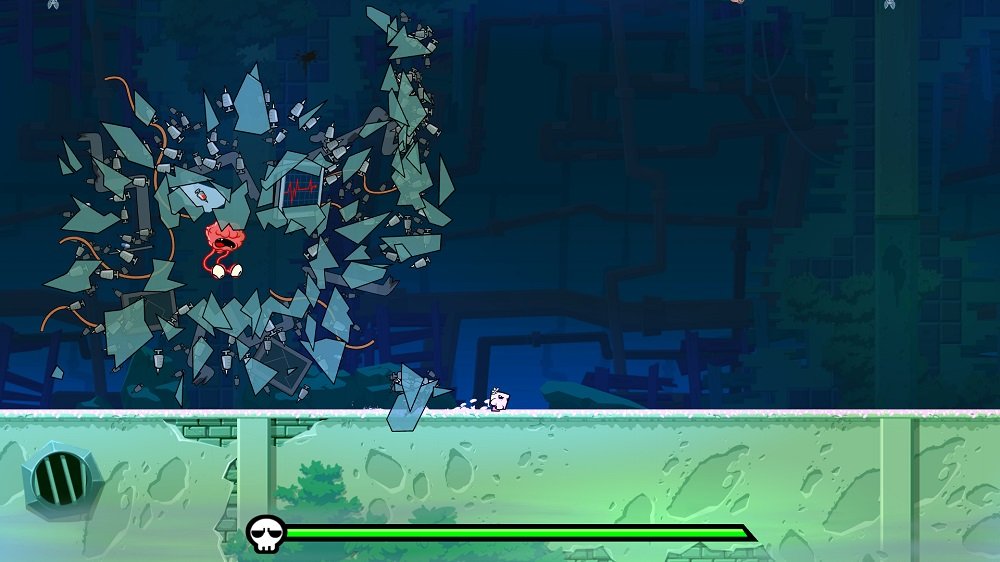 Super Meat Boy Forever is a solid auto-runner, offering much more in the way of challenge and depth than many other entries in the mobile-friendly genre. As a follow-up to the original Super Meat Boy, however, Forever is something of a disappointment. Team Meat should be commended for taking a chance and switching things up, (and creating a perfectly fine title in the process), but while SMBF‘s bespoke stages, Dark World variants, and cast of unlockable characters offer much replay value, it already feels a safe prediction that this sequel is not likely to achieve the staying power of the original. The difficult second album.

Once players get over the shock of its mechanical departures, Super Meat Boy Forever offers a solid and relentless auto-running experience. But there’s no denying that this long-awaited sequel doesn’t deliver the impact nor addictive magnetism of its predecessor. Regardless, those willing to look past this initial disappointment will discover a satisfactory time-killer, strongly adhering to the great visuals, manic presentation, and twisted humor that is the franchise’s trademark.