It’s a me, an up and down franchise

Everyone has a “fond” memory of Mario Party, even if you stopped playing it nearly two decades ago (yep, this series is celebrating its 20th birthday in December!). Whether it’s a thrown controller that freezes the game on the very last round (it happened to me) or a huge argument over someone sabotaging a team minigame to get ahead (also happened): Mario Party has tested friendships year in and year out.

For the first time on Switch, Super Mario Party is poised to begin the process anew. 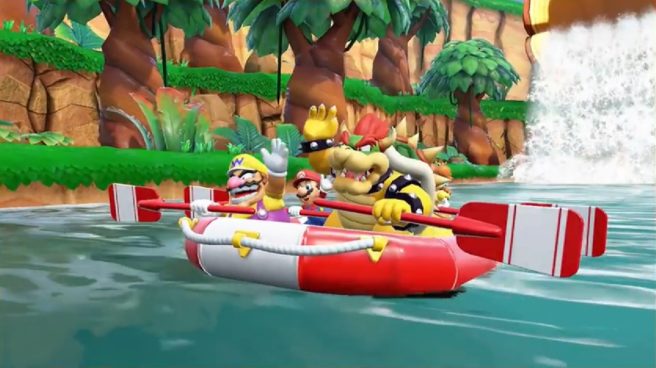 Let’s get this out of the way first: you might not like your control options here. The Pro Controller and portable mode (picking up the Switch and playing on the go with the system in your hands) are right out. You are required, no ifs ands or buts, to play Super with a single Joy-Con per player. Note that this scheme does work in both TV and tabletop mode, where you’re essentially using the Switch as a tiny screen (thus technically allowing the game to be portable through tabletop mode).

It’s a sticky wicket, a specter that loomed over Super Mario Party before I could even press start. This whole conversation funnels into the entire crux of what makes Mario Party tick: minigames. Yes there are some 1-2 Switch-esque affairs that require you to stand up and “pose for the camera.” And yes, just as I was for the inaugural Wii game, I’m kind of over it. Moving on to new control schemes is only natural, especially for a series as experimental and weird as Mario Party, but I’m the kind of person who prefers those old school tactile-centric minigames that pay homage to previous entries in the Mario series.

The vast majority of them are more traditional in nature, but the few motion-enabled ones ensured that the Pro Controller and its ilk could never be truly supported. If I sound passionate about control options it’s because I am! Nintendo has come a long way from forced waggle: now we have the power to use multiple setups, including a Joy-Con grip, Pro Controller, and any number of third party options. It’s one of the Switch’s biggest strengths and I hate to see it hamstrung here. I see no reason why nearly every Super Mario Party mode couldn’t have supported a Pro Controller — it has gyro functionality after all.

So with all of that hubbub out in the open, the minigames consist of an actually good selection this time around, and after the annoyance of not being able to use a Pro Controller melted away I got used to the single Joy-Con even with my gargantuan hands. There’s 80 new games, full stop: actual new games. You can check them all out here openly on Nintendo’s official website to see and judge for yourself. Now there are a few revisions that might not feel brand spanking new. Precision Gardening is basically the Balloon Burst pump minigame that’s been in since the start. There’s a successor to Hot Rope Jump: that sort of thing.

It’s even easier to acclimate to the old school board game style of play that returns to the mainline series in Super Mario Party. The car, a cursed past mechanic that forced everyone to move along a game board in unison, is gone: I repeat, the car is gone! In its stead is the character dice block concept, and I love it. It’s a great compromise between the fully luck-based 1-6 rolling of the past and the constant requests to inject more strategy into Mario Party.

Characters all have their own unique dice block they can roll in addition to a D6. Koopa Troopa has a low number spread for his, but has the potential to roll a 10. Mario, always the middle of the road hero, has a respectable dice that has a greater chance of rolling a three. Villains like Waluigi have dice sides that can subtract coins. This not only influences who you pick as certain cast members might play into your own personal style, but it also completely changes how you approach some situations (“I need a three, do I roll a regular dice with a 50% chance or try another one with higher odds?”). It sounds hyperbolic but the different dice blocks are one of the biggest innovations in the history of the series.

The four boards don’t match that innovation. Hudson and Nd Cube have proven that they’re capable of great boards. The Monopoly undertones of Koopa’s Tycoon Town from Mario Party 8 (which wasn’t that long ago) were incredible. Most of the ideas have been done before and there’s nothing particularly new with the core mode. Boards are also fairly limited in scale and scope so everyone is mostly doing the same thing. Maybe you’ll like that corralled feel compared to the experience of some of the larger maps of series past where you don’t come in contact often.

The core board game mode isn’t all that’s on offer though and I actually found the normally superfluous extras to be the strongest glue that holds Super Mario Party together. Partner Party is a strict 2v2 mode where teams square off against one another with the power to freely move around boards. Not only are double dice rolled here to move things along, but you can also sport different tactics, corner game-winning Stars as a collective, or box out the enemy team by stomping them to steal their coins. Approaching boards here is very different as you have more freedom. 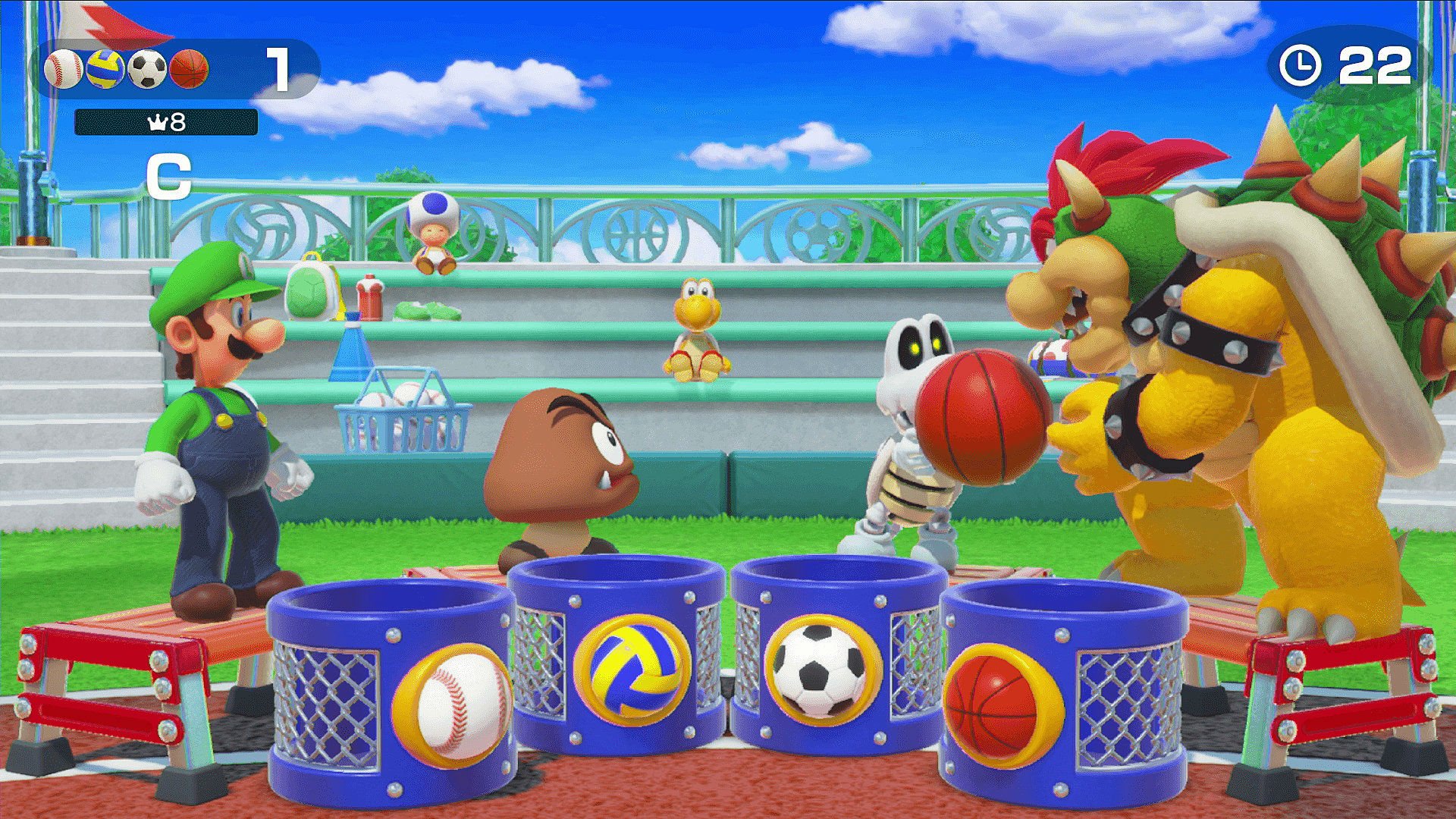 There’s also a Rhythm Heaven style mode that lasts 10 minutes, which is great for moments when you only have a limited amount of time to play. It’s fantastic, and although it only has three variations (and a handful of different games) I was pleasantly surprised at how fun it was with competitive friends. The first real full co-op mode, which places a group of four into a raft together is a hoot: and will take you anywhere from one to 15 minutes to complete depending on how well you do. Its key draw is that there are multiple routes to take, enticing groups to play it multiple times over and get the best clear time. It’s a relaxing gametype that really plays up the cute “high five” mechanic (swinging the Joy-Con in unison): even if it does suffer from a very low co-op only minigame pool.

There’s also “Toad’s Rec Room,” that allows for multiple forms of Switch positioning, including stacking two consoles together. Three minigames have the option for dual consoles, and one requires it: I was not able to test the latter one out for this review. Given that Rec Room only supports four games it’s more of a tech demo for a future WarioWare title than anything else. If you want the classic “just the minigames please” gametype is back along with a challenge mode with constant minigame play. Finally, and I know people are going to be pissed about this, but online mode is restricted to “just the minigames.” Full online play is something folks have wanted for a while, especially if they can’t gather up enough friends to justify the cost of entry, but they’re going to have to wait even longer.

I have a lot of quibbles with Super Mario Party that could have drowned it, but the extras pull it up above water. 80 new minigames, most of which aren’t busts, is a feat. Having a team-based mode where you can move around freely and going back to basics with the core board game (goodbye car, hopefully see you never!) was a good move. Restricting play options and easing up on the amount of boards available? Not so much.