In space no one can hear you squeal with delight

Remember The Last Starfighter? Of course you do; you probably dream about the premise happening to you. The hope of being recruited by aliens to fight in an intergalactic war because of one’s mad gaming skills is pretty much why I spent an inordinate amount of pocket money on arcade games as a wayward youth. If I hadn’t been so utterly incapable of even getting close to a high score, I’m certain I would already be saving you all from an alien invasion.

Don’t feel sorry for me, though. I might not be a hotshot pilot for real, but I’ve spent the last few days pretending to be one in the recently Kickstarted Strike Suit Zero — it’s been a hell of a ride. And all of those times my ship exploded into a thousand tiny bits of shrapnel, I was content in the knowledge that I hadn’t actually doomed Earth and everybody living here. 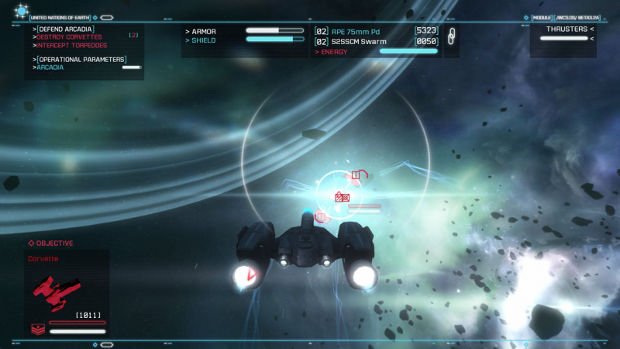 Science fiction would have us believe that if mankind doesn’t immediately get embroiled in a war with a hostile alien race the moment it sets foot amongst the stars, it will inevitably start a war with its space colonies instead. That latter premise is the impetus for the action-packed Strike Suit Zero — a game that channels so many things I love, from Colony Wars to Homeworld, that I cannot help but adore it, even when it’s infuriating me.

So here’s what’s happening in the future: Humanity has spread out across the stars after discovering an alien transmission. The relationship between the United Nations of Earth (UNE) and her off-world colonies has become strained, and after Earth scientists discover strange technology on a colony world and try to keep it for themselves, they are expelled from the planet and a civil war begins.

To call it a civil war is probably giving too much credit to the UNE, though. Earth’s forces get shafted pretty thoroughly by an alien relic the colonists possess, and the rest of the game has Earth’s surviving fleet desperately racing to their homeworld to stop its complete destruction.

I’m not going to mince words here, the plot is pretty awful. It’s silly and forgettable, and the characters are nothing more than boring talking heads telling you things you probably don’t care about. Against the odds, I somehow found myself actually enjoying a little bit, however. There’s something oddly compelling about rushing to Earth to stop a bunch of vaguely bad people from murdering billions for no apparent reason. Almost single-handedly trying to win a war with a flash spaceship is simply fun, no matter how you swing it. 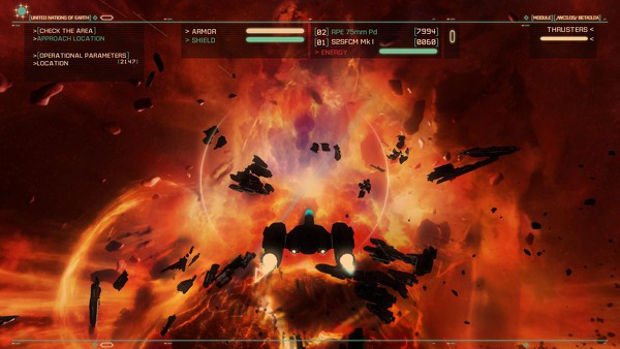 The title’s protagonist, some mute fellow named Adams, is just your typical ridiculously awesome pilot — he’s probably a good looking fella to boot. He fights for the UNE, and early on in the game gets given the titular Strike Suit, the main draw of the title. Some missions put you in other vessels, and all unlocked missions can be replayed with different ships, but it’s the Strike Suit that you’ll really want to play with. It’s the most balanced of the bunch, but more importantly it can transform into a floating mecha that sprays “swarm missiles” at dozens of targets all at once.

By destroying foes, the suit charges up, and expels said charge by blowing everything that you can see to kingdom come. It’s immensely satisfying, and covers the screen in winding, twisting shooting stars, which looks even more striking given the absolutely stunning backdrop of space.

Born Ready Games have done a stellar job making the cold expanse of space look rich and interesting. Huge, detailed worlds punctuate the colorful environment of nebulae, stars, asteroids and solar glare. The stark, cold blackness one might expect has been replaced by something almost viscous and more tangible. The bright color palette makes each level leap out at you, whether it’s the sharp blue neon that permeates the UNE training area, or the ominous, hellish red of a blasted world struck by the alien relic. In the middle of it all are countless tiny ships, weaving between imposing cruisers and frigates, and all of those engine trails will make you shout “Homeworld!”, as you point at the screen and look like an idiot. 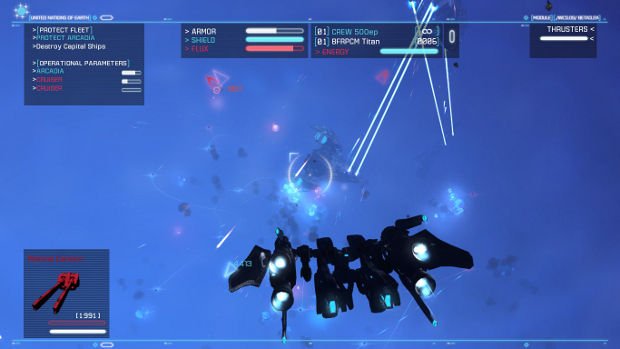 It was surprising that the visual design of said ships did not impress me nearly as much as their playground, the wonderful Strike Suit not included. Junji Okubo (Infinite Space, Appleseed Ex Machina, Steel Battalion) was the brain behind the vessels, but the majority of both fleets look tame and rather generic. The Strike Suit looks wonderful, however, both in its ship form, where it looks like a super slick craft you’d be proud to fly, and its mecha form, which has a distinctly Eastern aesthetic.

It should be noted that in mecha form, the Strike Suit does not control as one might expect. You won’t be swooping down on enemy cruisers and carving them up with a laser sword; such maneuverability is left to the ship form. Instead, it acts more like a stationary missile dispenser, a giant gun, essentially. It can quickly strafe to reposition itself or avoid enemy fire, however.

All player ships are a delight to control, and while there are differences in how many weapons they can wield, or how responsive they are, you’ll still have no problem getting into dogfights like the hotshot you’ve always dreamed of being. Zipping in and out of scraps, speeding towards gigantic laser toting behemoths to deploy a missile salvo, before pulling back to cover allies or blow up huge rockets is an explosive thrill ride. Four ships are available, the fighter, interceptor, bomber, and the Strike Suit; however the first time you play a mission you will be restricted to just one of them.

Oh yeah, the missions. Those are things. Unfortunately, they are rather tiresome, laden with objectives so uninspired that you can sometimes forget you’re doing something as amazing as flying a giant mecha in space. Blow up this ship. Shoot at these dudes for a while. Fire at a couple of flak cannons. Inevitably I’d lose myself in the ballet of hectic space combat, but the impetuses for these battles are really quite dreary.

While SSZ nails the combat between smaller ships, it leaves a lot to be desired when it comes to tackling the larger enemies. Targeting can become extremely spotty when you are attempting to take out specific ship guns on cruisers and frigates, and it’s easy to become disorientated when each gun (the big ships have dozens) is represented by its own red arrow or diamond on your HUD. 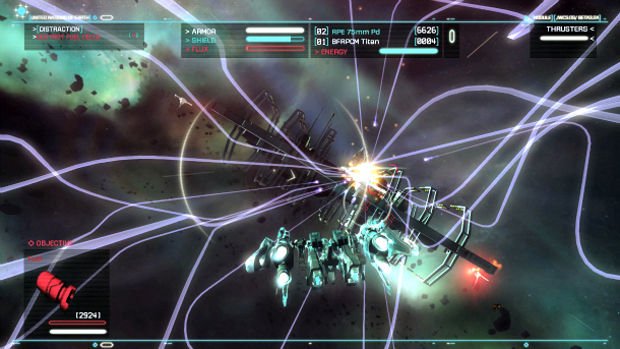 It does not help that allied AI is truly abysmal. Most missions involve titanic clashes between dozens, if not hundreds of ships, but I constantly felt like I was the only pilot doing anything. Your fellow fighters tend to ignore the big enemies, leaving it up to you and the occasional allied capital ship to take down a vast number of massive foes. The allied capital ships also present a problem when protecting them is often a primary or secondary objective, as they do absolutely nothing to avoid getting blown to smithereens.

The only time allies even offer a pretence of aid is with the constant radio chatter, and damn is it annoying. When they are not spreading misinformation, they are telling you something you already know. The worst times are when they decide to chat to you while you are attempting to listen to the dreaded sound of a missile locking onto your ship. They do more to help the enemy than help you, honestly.

A few noticeable bugs also hampered my experience. Scripted events would sometimes fail to begin, more than a few crashes occurred, and occasionally non-existent targets would pop up on my HUD. Crashes were the worst, as they erased my mission progress, requiring me to start from the beginning of the rather drawn out missions. These long missions aren’t improved by the rather brutally spaced out checkpoints either.

I confess that these annoyances, while frustrating, didn’t stop me loving my time with SSZ. Replaying a mission because of a crash is a pain, but when I have so much fun fighting across the stars, I can’t get too angry about doing it all over again. It’s a testament to how entertaining this space combat sim really is. 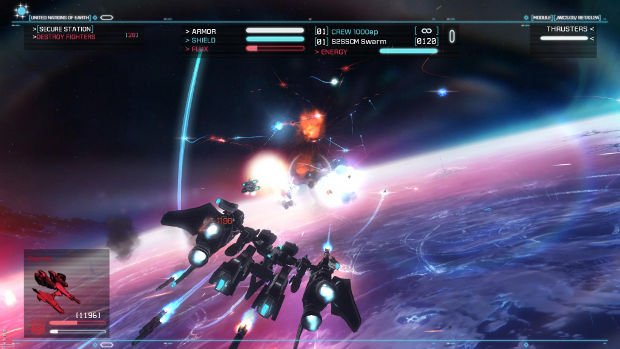 My forgiveness does come from a lot of the nostalgia the game simply oozes from all of its pores. SSZ is a product of love for the genre, and its inspiration is clear. This was a title crafted by people who adore the titans of ’90s and early ’00s space games: Freespace, Freelancer, Starlancer, TIE Fighter, and of course the aforementioned Colony Wars and Homeworld are all clearly muses for Born Ready Games. In fact, the soundtrack was composed by none other than Paul Rusky, the genius behind the haunting music of Homeworld, and it shows, as it’s a fantastic accompaniment to the space romp.

When the final, sadly unsatisfying mission came to a close I was ready to put down SSZ. Replayability is offered in the form of scores, medals, and some unlockable ship bonuses you may not have been able to grab when first attempting the missions, but I’d had my fill. I would be happy to get in a thousand more dogfights, but I’m done with protecting and escorting my UNE chums. It’s rare that a game knows when to call it quits, but that’s the situation here. It’s not so long that it outstays its welcome, but not so short that it fails to show off all its promise.

The ending, or at least the one that I got (there are two different ones), implies the possibility of a sequel, and I couldn’t be happier with that prospect. With better targeting, and less mentally sub-normal allies, I could very well find myself in Heaven. Until then, Strike Suit Zero will undoubtedly help you scratch that space combat sim itch you must have by now.