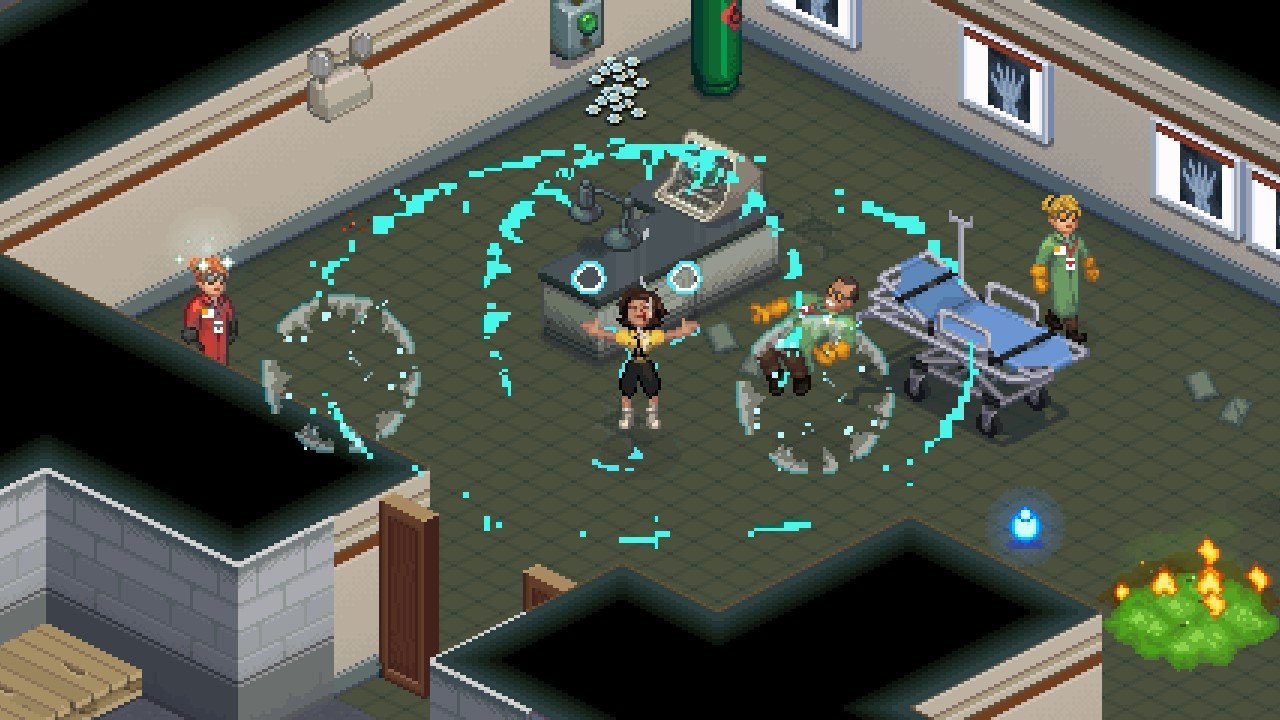 It’s weird that this hit the Switch before a Netflix app, right?

Stranger Things 3: The Game is a note-for-note retelling of Stranger Things season three, released day and date with the popular Netflix series. If you haven’t seen it, Stranger Things (the show) draws influence from several retro sources, most notably the novels of Stephen King and child-endangerment movies of the ’80s such as The Goonies and Stand By Me. Similarly, the Stranger Things video game takes inspiration from games of days gone by, especially late SNES titles. This is a little ironic since the show is set in 1985, just before the Nintendo Entertainment System debuted in select markets in the U.S., and the Super NES graphics the game is imitating wouldn’t show up for another decade.

I’ll do my best to avoid spoilers in this review, but odds are pretty good if you’re reading this, you’ve already binged your way through the latest season. If not, the short, spoiler-free version: It’s a fun co-op game, but there are a few technical problems that keep it from greatness. Namely, it goes on a little too long and follows the source material a little too closely.

Sttranger Things 3: The Game (ST3) is a cooperative brawler featuring most of the cast of the hit Netflix show, and follows their adventures as they face off against yet another eldritch monstrosity turning their peaceful midwest town into a realm of nightmares. The “Mind Flayer” which possessed Will last year is still influencing people and events in the town of Hawkins, Indiana, and it’s up to the same group of youngsters (and the few adults who believe them) to save the day.

The story this time revolves around Hawkins’ new Starcourt mall, and just like the show it involves foreign investors making shady real estate deals, a secret lab devoted to accessing another dimension, and a whole lot of squelchy creatures spawned by unethical science experiments.

The game takes place from an isometric viewpoint which works well with the brawler-style gameplay. Each character has a different attack and special ability based on their appearance and actions in the show. Two playable characters are on screen at all times, and players can quickly swap between them if they’re playing alone, or bring along a friend to play in split-screen co-op.

Co-op is handled very well, with a second player able to join at any time simply by turning on a second controller. Each player gets half the screen, and you can explore freely in different directions if you want to. Even better, dropping out is just as easy, and AI takes over seamlessly if the second player wants to quit. If you’re playing alone you can issue simple commands to your AI partner, telling them to wait, follow, or use their special ability with the touch of a button.

When you start the game you only have access to a few of the cast, but as the story progresses up to 12 characters can be unlocked. Each character has their own special ability, and several of these can be used to aid in traversal or gain access to hidden secrets.

Most of the gameplay revolves around beating up various creatures and evil humans, then collecting the money and items they drop to craft “Trinkets” which boost one or more characters’ abilities. These range from an upgraded wallet and the classic nail bat to more exotic items such as a Wonder Woman costume or a belching contest trophy. The trinkets each affect different sets of characters, and it helps to consider whether your current party is composed of kids, adults, males, or female heroes and adjust your equipment accordingly. The most powerful and difficult to craft trinkets only affect a single character, but these usually offer a much greater benefit to offset their lessened utility.

For the most part this system works pretty well, but I did run into a couple of sticking points where I didn’t have the items to craft a progression-crucial item and ended up having to grind for money so I could buy something I needed to move the plot along. This didn’t happen often, and when it did I usually worked on another quest for a while instead of worrying too much about it. Many characters in Hawkins have jobs you can do to earn some extra pocket money if the spare change you’re earning by slaying monsters isn’t sufficient.

ST3‘s gameplay borrows heavily from previous entries in the beat-em-up genre, especially games like River City Ransom. The developers even threw in a Smash Bros. style shield each character can use to block and (if timed well) gain some bonus damage. What it reminds me of most, however, is a darker version of Lucasarts’ classic Zombies Ate My Neighbors. I can’t think of too many other games where you can kill demons by throwing ice cream at them.The writing in the game is a little lighter than the show, and the developers snuck in some extra era-appropriate pop culture references and jokes. Parallels to Earthbound can be made as well, since psychic kids fighting against evil extraplanar entities while the majority of the townsfolk turn a blind eye is kind of that series’ whole thing.

The combat is reasonably satisfying, the gameplay loop is fun, the pixel graphics are excellent, co-op is well done, and the source material is engaging. What could go wrong?For starters, the sound is kind of underwhelming. There are only a few music tracks and they repeat constantly as you explore an area, only changing when you move to a new area or during a cutscene. Thankfully they’re all pretty mellow and low-key, inspired by the synthwave show opener that accompanies the glowing red title screen. The music isn’t bad, it’s just kind of there.

The same can’t be said for the attack sound effects. You’ll hear them incessantly, and some are far more irritating than others. Jonathan’s meaty punch sound was amusing the first few times I heard it, but it got old quickly when I realized there was no difference between hitting a person, a bush, or a squelchy abomination composed of quivering meat. Erica’s squeaky autohammer has to be the worst attack sound of all, which is a shame since the built-in stun effect is quite useful.

I found it a little odd how ingrained into the gameplay Coca-cola products are. You restore energy for your special attacks by chugging a New Coke (one of the biggest disasters in marketing history, by the way), and there’s always a can on the right side of your character’s heads-up display. If the game is ever delisted, I suspect this tie-in will have a lot to do with it.

Some of the other issues I ran into may be a result of the hardware I was playing on, since I received code for the Switch version of the game. Loading screens are quite frequent (though they don’t last very long), and I noticed some frame drops whenever action on screen got particularly intense or whenever the game autosaved. This didn’t affect my play very much, but it did make it more difficult to time my blocking and resulted in a few deaths I don’t think I deserved. I’m not sure if the Xbox One, PS4 or PC versions have this problem, but as I mentioned it was a relatively minor issue.

I think the biggest problem I had with the game was its pacing. My wife and I binge-watched the show’s entire third season the day it released, which took up about eight hours. Playing through the game’s story took about 12. Granted, I was doing every side quest and exploring thoroughly to try and find hidden items, but I don’t think it would have taken much less time to play through nothing but the critical path.

Almost nothing shown on screen during the Netflix show is left out, which begs the question; what’s the purpose of the game? The story has already been handled better and more cinematically. If it’s for people who want to relive the experience of the TV show, well, they could just watch the series again. The show does a better job of building dread, has more engaging characters, and simply tells the story better than the game does.

It’s impressive to see everything from the show I just watched in pixel form, but there doesn’t seem to be any reason for it other than marketing. That’s a shame, because BonusXP clearly put a lot of time and effort into the title and it makes me wish the developer hadn’t been quite so slavish to the source material.

I’m conflicted. Cooperative titles like this are hard to find nowadays, especially with drop-in, drop-out co-op. There’s no denying it’s fun exploring with a friend and the game contains some genuinely clever challenges, especially during the boss fights. There’s the seed of a great game here, and I’d genuinely like to see more like it. I really hope BonusXP gets the chance to use this engine to make something else: It’s pretty good for a licenced product, but ultimately, that’s all it is.