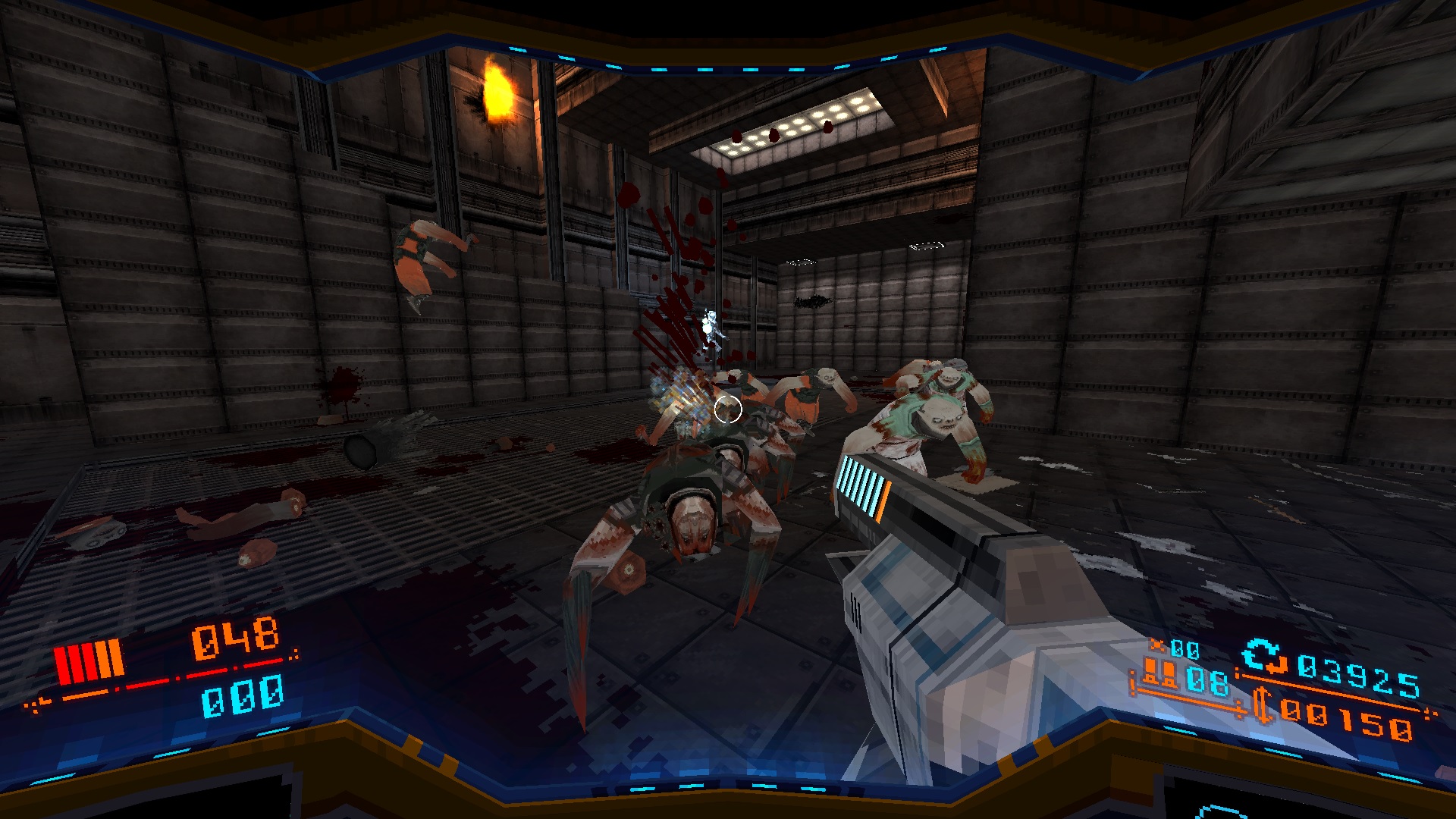 Blast from the past!

My first look at STRAFE was from Destructoid back in 2015. When a successful Kickstarter had funded the game, I became intrigued by a marketing gimmick that centered heavily on “Bleeding Edge Graphics for 1996.” I love shooters and 1996 was one of the cornerstone years for the entire genre.

When I finally got hands on time with the game, I was a little saddened to see it was going the route of being a roguelike. I really just wanted a return to old-school classics a la Rise of the Triad, but with good performance. After that initial wave of disappointment, though, I started to understand the hook.

STRAFE is basically Spelunky in first-person, with all the setbacks and accomplishments of its inspiration. 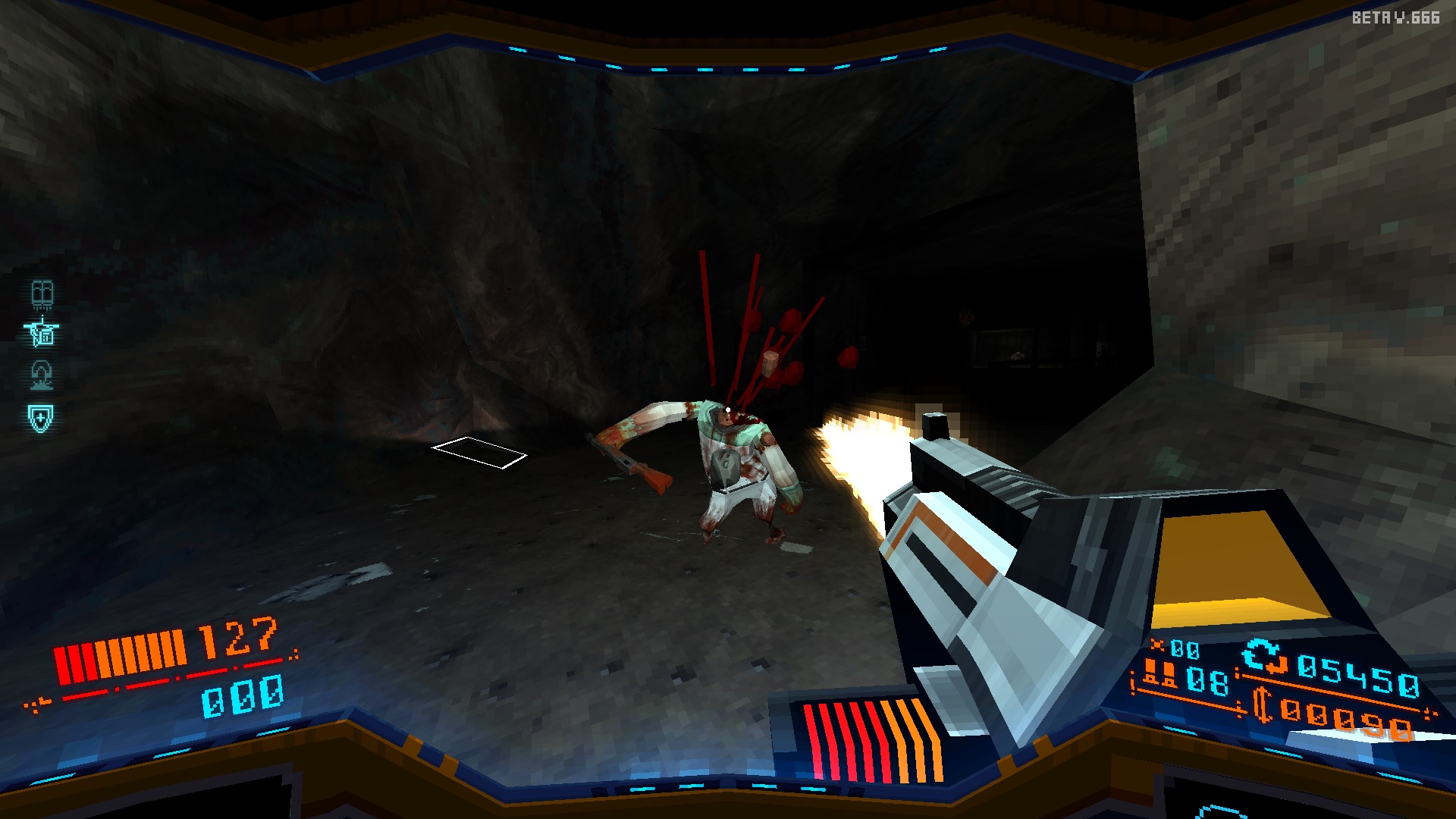 If you’re looking for some kind of story or deeper plot, just stop. STRAFE takes things back to the good old days where gameplay was front and center and narrative took a backseat. That isn’t to say you can’t connect some dots and try to piece together your own story, but STRAFE is really about the experience of playing it.

STRAFE mixes first-person shooters with roguelikes, making for a game that has the aesthetic and mechanics of something like Quake, but the level design and vague nature of Spelunky. Levels are all randomly generated and all pickups (like upgrades, health packs, ammo, etc.) are rarely explained in a clear manner. You get a general idea of how things work by grabbing the bull by the horns and just rolling with it.

The only real gameplay comparison to classic shooters STRAFE has is that combat is entirely projectile based. While the player has weapons which utilize hitscanning (a gameplay technique which calculates bullet trajectory based on crosshair placement), none of the enemies are equipped with such weaponry, which makes the game heavily skill based.

If the shit hits the fan, you can always count on your raw skills to see you through. The real difficulty comes from the sheer amount of enemies, and it sure can feel cheap at times, but you just need to prioritize the biggest threat in a room at every given moment. It harkens back to the reason Doom remains such a classic: enemies are recognizable and allow the player to formulate strategies on the fly.

You start by picking between one of three weapons: a shotgun, a machine gun and a railgun. This is the only weapon you can collect ammo for during your playthrough, as the others work like temporary power-ups. There’s an eclectic collection of weapons, each themed around classic FPS tropes like a rocket launcher, a plasma gun, and a pistol, but they have a limited amount of ammo on them. You get roughly 10 shots, though the damage output far exceeds your regular gun.

Thankfully, you don’t need to blow through your extra weapons upon grabbing them. You can always swap back to your default weapon to conserve special ammo for a tough situation. This lends a lot of tactical depth to the combat, letting you decide when the best opportunity will arise to rip out your extra-deadly weaponry.

Enemies are all immediately recognizable by their character models, which helps with prioritization in tight gunfights. There are small grunt-like types that rely solely on melee attacks, so you can often leave them for last in a room. Guys wearing hoods use a slow-moving gun that can easily be dodged, but has a long range on it. Later levels start introducing other enemy types, like suicide bombers, snipers, and heavy grunts, and even the melee combatants start to change up speed statistics or come equipped with armor, further diversifying the enemy pool.

A lot of these enemies are exclusive to specific levels, of which STRAFE features four zones. Each zone has three levels and progression is based on some central gimmick inherent to that zone. The first area focuses on finding keycards or grabbing someone’s head to use on a retina scanner. The second area is about finding bombs and blowing up cave-ins and so on. 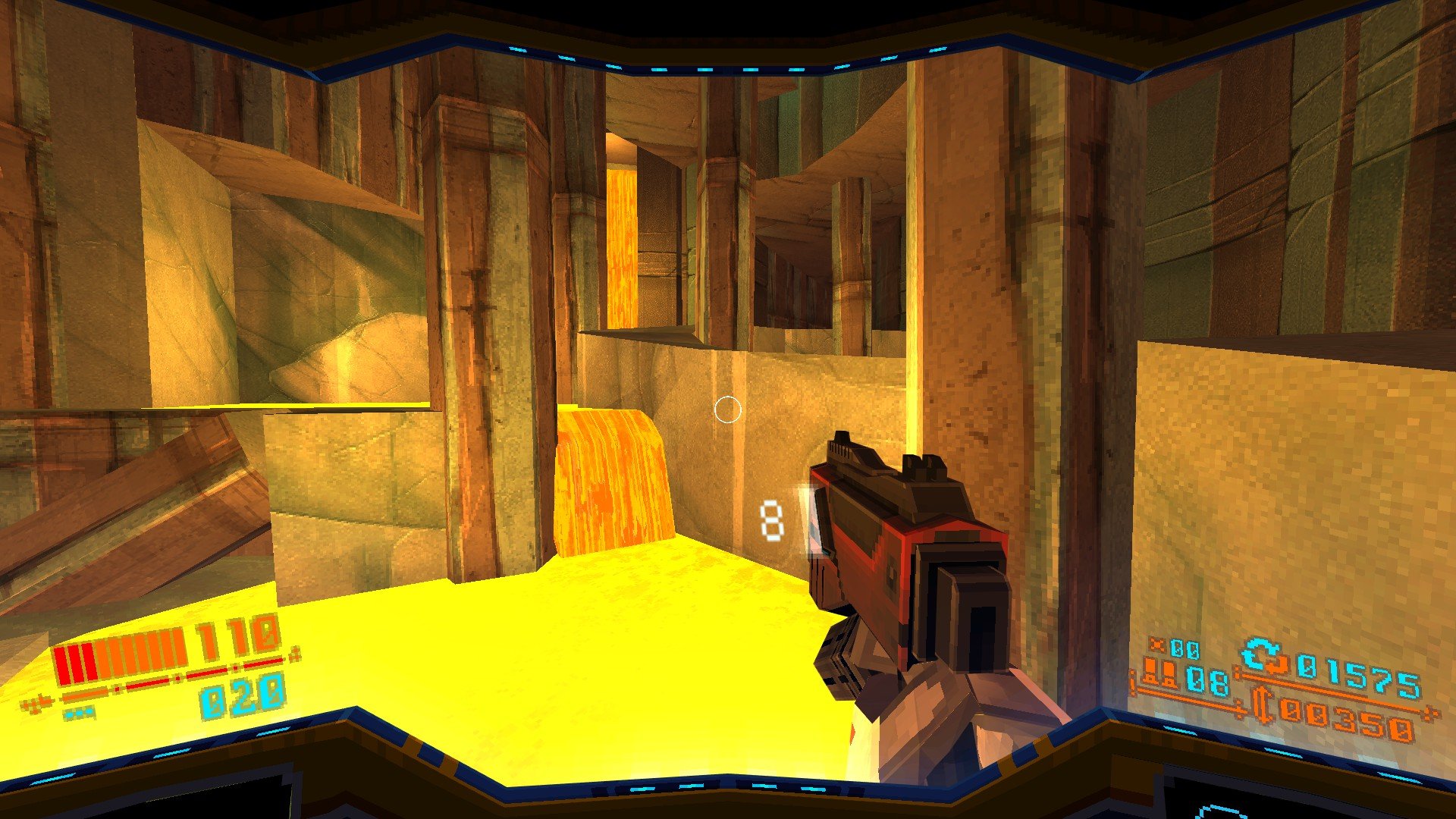 It helps that the graphics are basically a replication of the chunky, blocky, early 3D we saw before the turn of the century. In a really cool touch, you can actually make the game look worse in the graphics menu, which then seemingly smears Vaseline all over the screen in an attempt to replicate CRT displays. That is funny for a quick joke, but I honestly couldn’t play with it on for very long. Even without that, you’d be forgiven for thinking STRAFE really was made in 1996.

Reveling more in that late ‘90s style, STRAFE also has extreme gore. When you blast enemies, their limbs will go careening across the map and blood will gush from their heads like an early Tarantino movie. In a surprising show of depth, this actually factors into the gameplay. Certain enemies will spit acid (or have acid blood), so goring a regular meatbag over acid on the ground will completely cover it and negate the damage that you would have received.

As for things specific to this game, STRAFE features two different forms of currency to help players power up and get items or upgrades. The first is scrap, which most enemies will drop in decent quantities. If you go to one of the various workbenches you’ll find in each level, you can craft some armor or ammo packs for yourself. You’ll definitely need to do this, as enemies hit hard.

The second currency is credit chips. These fall from enemies, but in far less quantity. With credit chips, you can take your gains to the shop that appears on every second level (so 1-2, 2-2, etc). While the items that appear in each playthrough are randomized, they offer a wide range of effects like protection from acid, double jump boots, quick dodging, and other various tweaks to the game. My personal favorite has to be regenerating health for getting kills, which is clearly something you’ll be doing a lot of. 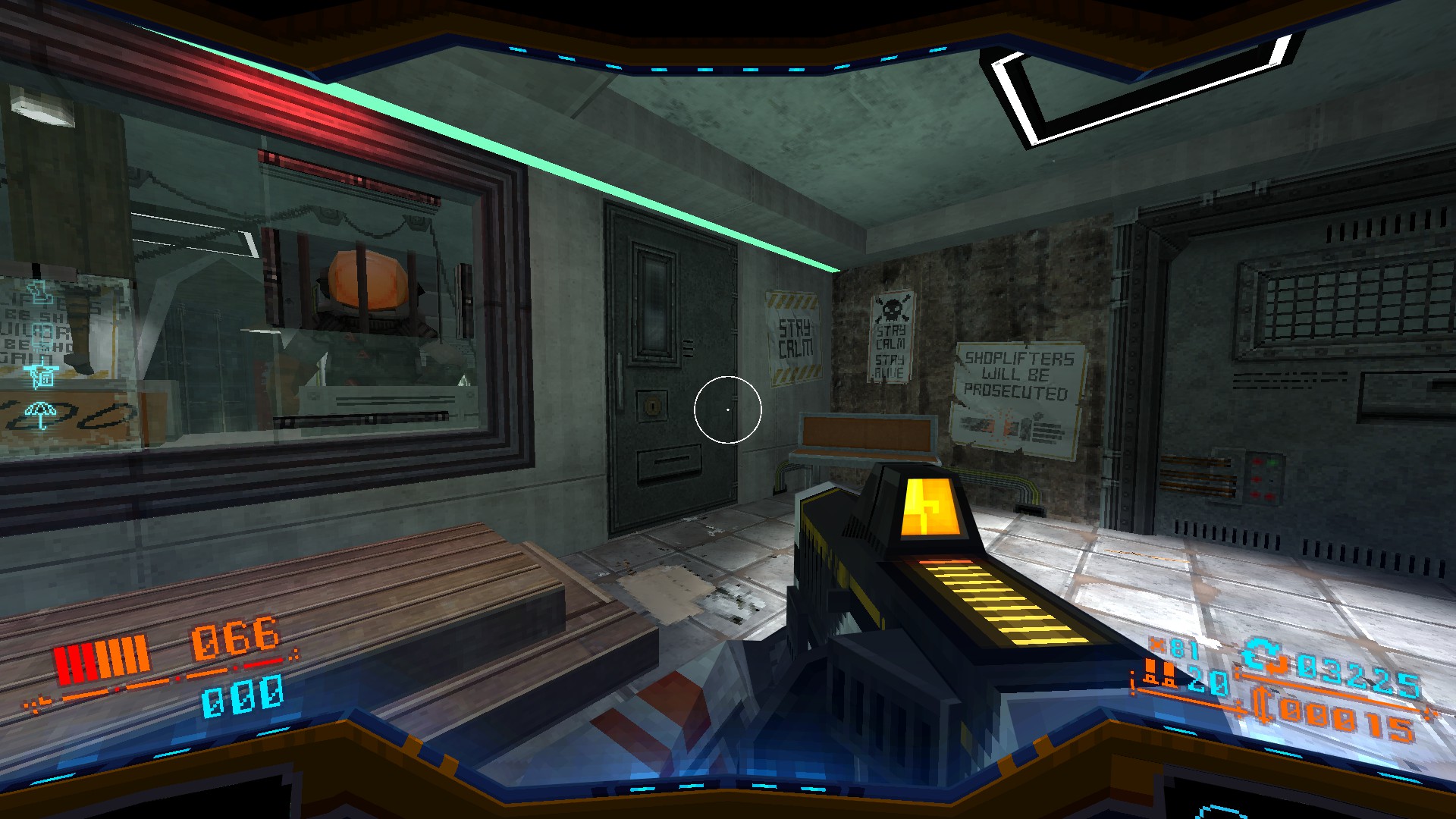 There are also upgrade stations for your main firearm that appear randomly. These will augment the standard firing mode of your gun (which you can later redact from a workbench, if you want). You can turn your shotgun into a grenade launcher, your railgun into a burst-fire rifle and your machine gun into a mine-thrower, along with a few others. While fun to tinker with, it’s usually better to just stick with your default gun.

Finally, there are small pickups you can get that will upgrade things like your firing rate, your guns ammo size, and your accuracy. These aren’t entirely necessary, but it helps with giving you a near-automatic shotgun, for instance. Getting to the later levels and feeling overpowered is great for the nonsense you sometimes encounter.

Being a roguelike, the elements may be unbalanced depending on how the random number generator is feeling. There are some runs I’ve started where I can breeze through the first couple of levels, but if I restart, I’ll get my ass kicked immediately. It doesn’t help that the last zone feels limp, but then the final boss is totally overbearing.

At least there is a fairly diverse assortment of randomized levels. In roughly 10 playthroughs, I had not encountered a repeated segment. When you do start to see them, though, the way the levels interlock always feels organic. It hardly echoes the complexity of classic FPS level design, but it does enough to make you think about how you’re progressing. Backtracking is also not frowned upon, so walking back through the carnage you’ve inflicted is a sort of perverse testament to your skill. 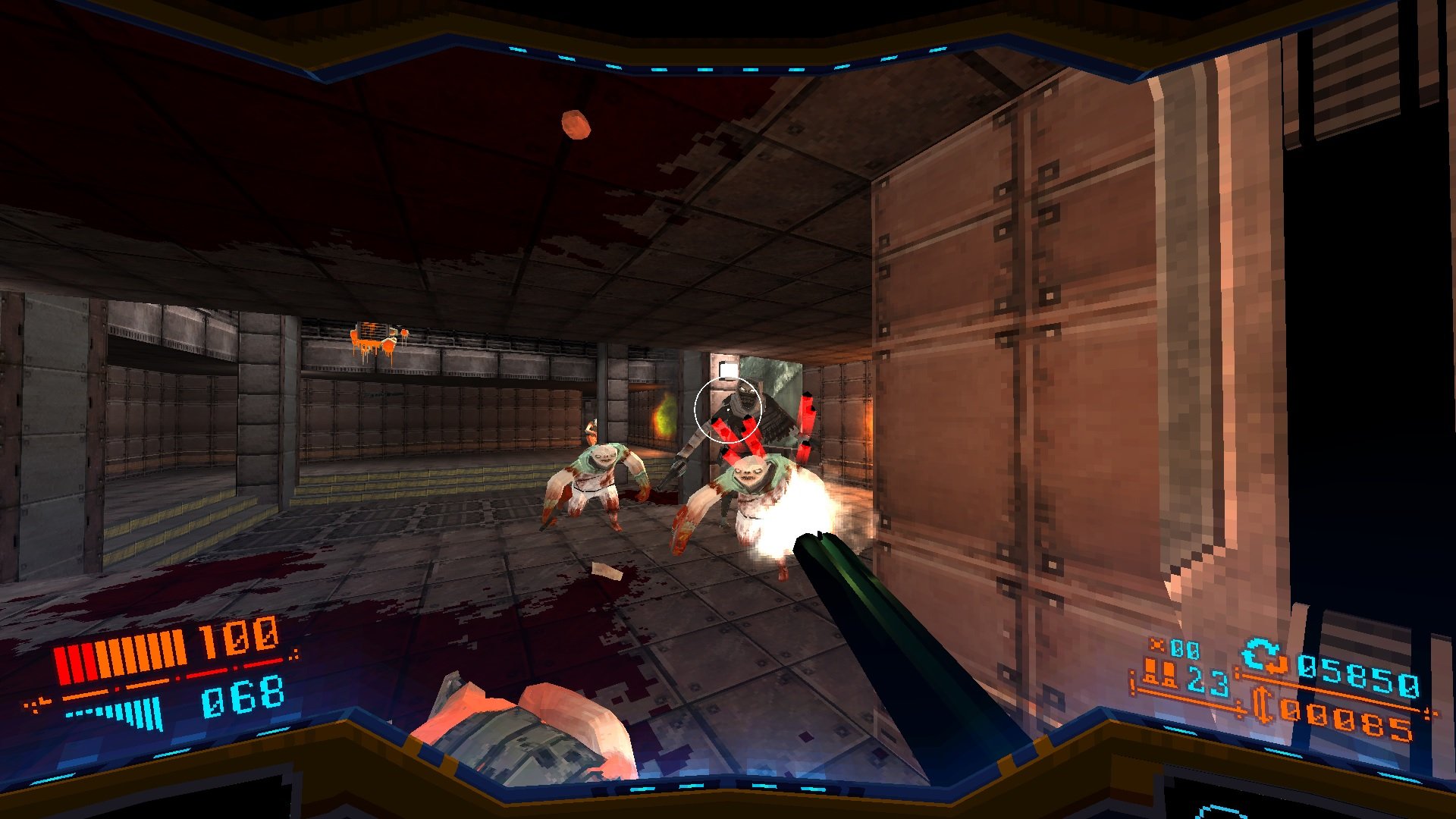 Much like Spelunky, you can find parts to a teleporter in each playthrough that will allow you to immediately skip to specific zones. Doing this requires you to still get to that zone and place the teleporter piece, but at least you don’t have to endlessly repeat similar sections if you’re looking to reach the conclusion.

If you do become bored with continuously trying to “beat” the game, there are a few other modes to try out. From the main menu, you can opt to try a daily speed run, which contains a unique seed that you get one shot at, a weekly speed run, which gives you a small segment and unlimited tries to best, and a horde mode, called Murder Zone.

Murder Zone is the only mode in the game that contains persistent progression. You start with the same three weapon choices from the main game, but after each run, your tally of blood spilled pools up to give you more and more unlocks. Eventually you’ll be able to boot up Murder Zone and start off with extra armor, different weapons, and an item in between each room of enemies.

I also need to make mention of the outstanding soundtrack. The score covers a lot of different themes, ranging from industrial heavy synth rock to slower, methodical pieces that build in energy. I don’t know if the tracks really fit the mood of the scenery, but you’ll constantly be bobbing your head and rocking out. 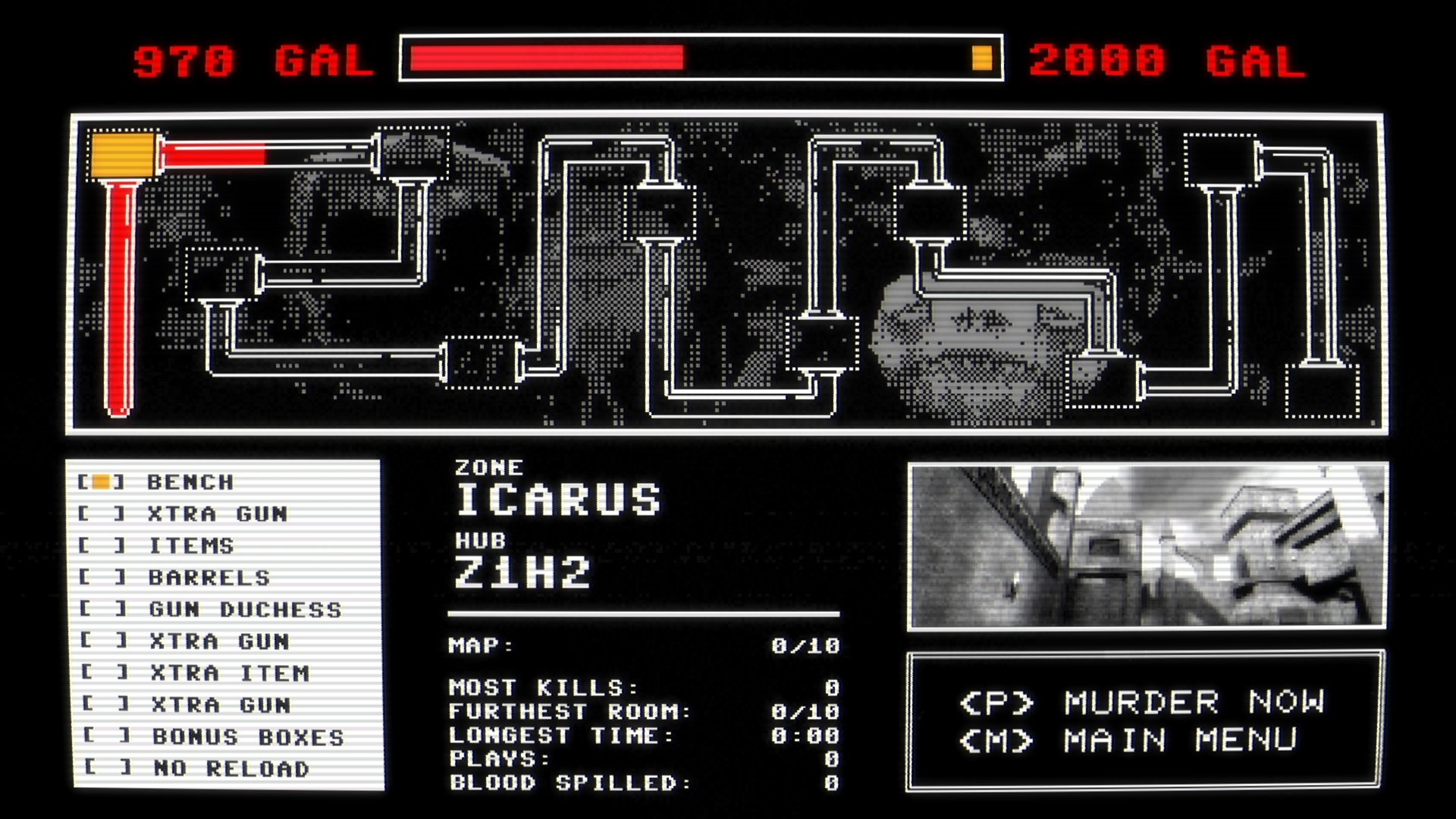 I may be a bit elated with how well STRAFE turned out, that doesn’t mean the game is free of bugs. While a lot of the more pressing issues are set to be fixed in a day-one patch, I’ve still hit some bugs where textures will render incorrectly, I’ll get trapped in walls and even fall through the world to enter some weird pink-covered dimension that halts progression.

That really doesn’t help when the game is already difficult. Yeah, this is a highly skill-based game, but sometimes an enemy will appear from nowhere and you’ll take unnecessary damage because you couldn’t react. Getting hit also doesn’t do a great job of indicating where you’re taking damage from, which usually leads to taking even more hits. Also, that final boss is bullshit (but maybe I just suck).

Even with all that said, I find myself coming back to STRAFE to try and best its challenges. The game can be crushingly difficult, but it always remains engrossing. Despite going back and forth between loving and hating it, I’m still addicted some 20 hours later.

STRAFE may not be a classic and it definitely has issues, but it’s fun enough for anyone who wants a nostalgia trip. Hopefully others feel the same way, but I kind of expect most people will pass on it. That is their loss.