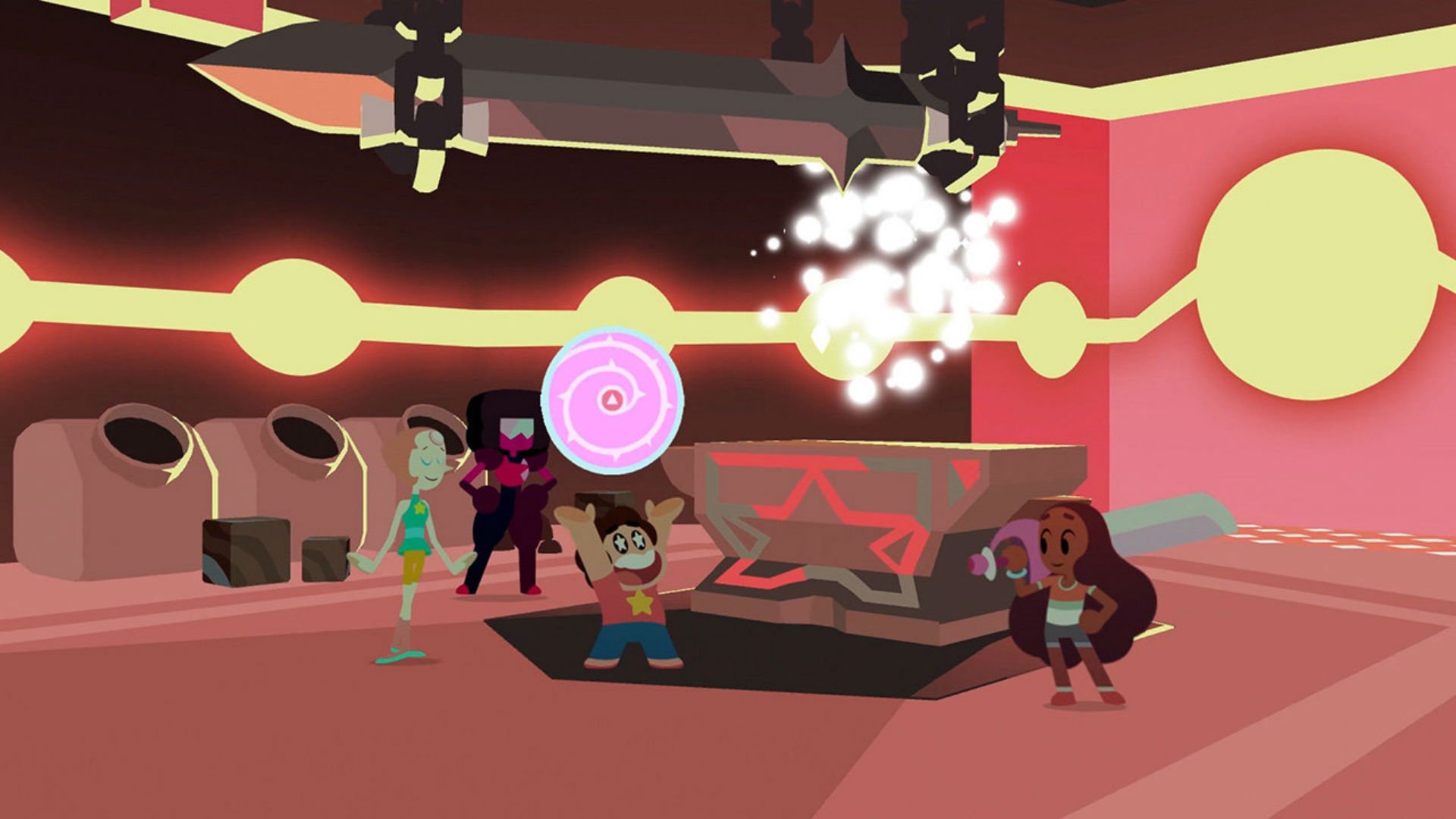 Maybe go out for pizzas instead

Steven Universe is a crazily popular Cartoon Network series, and it’s one of the best cartoons in recent memory, so it was only a matter of time before it would make its way to gaming. Grumpyface Studios, the studio behind a number of mobile releases for Cartoon Network and Steven Universe: Attack the Light, has teamed with series creator Rebecca Sugar for Steven Universe‘s first big foray into the console scene.

Just like the TV series, although Steven Universe: Save the Light is charming and full of incredible art design, it’s got a fair share of problems that’ll guarantee the full experience is less enjoyable over time. 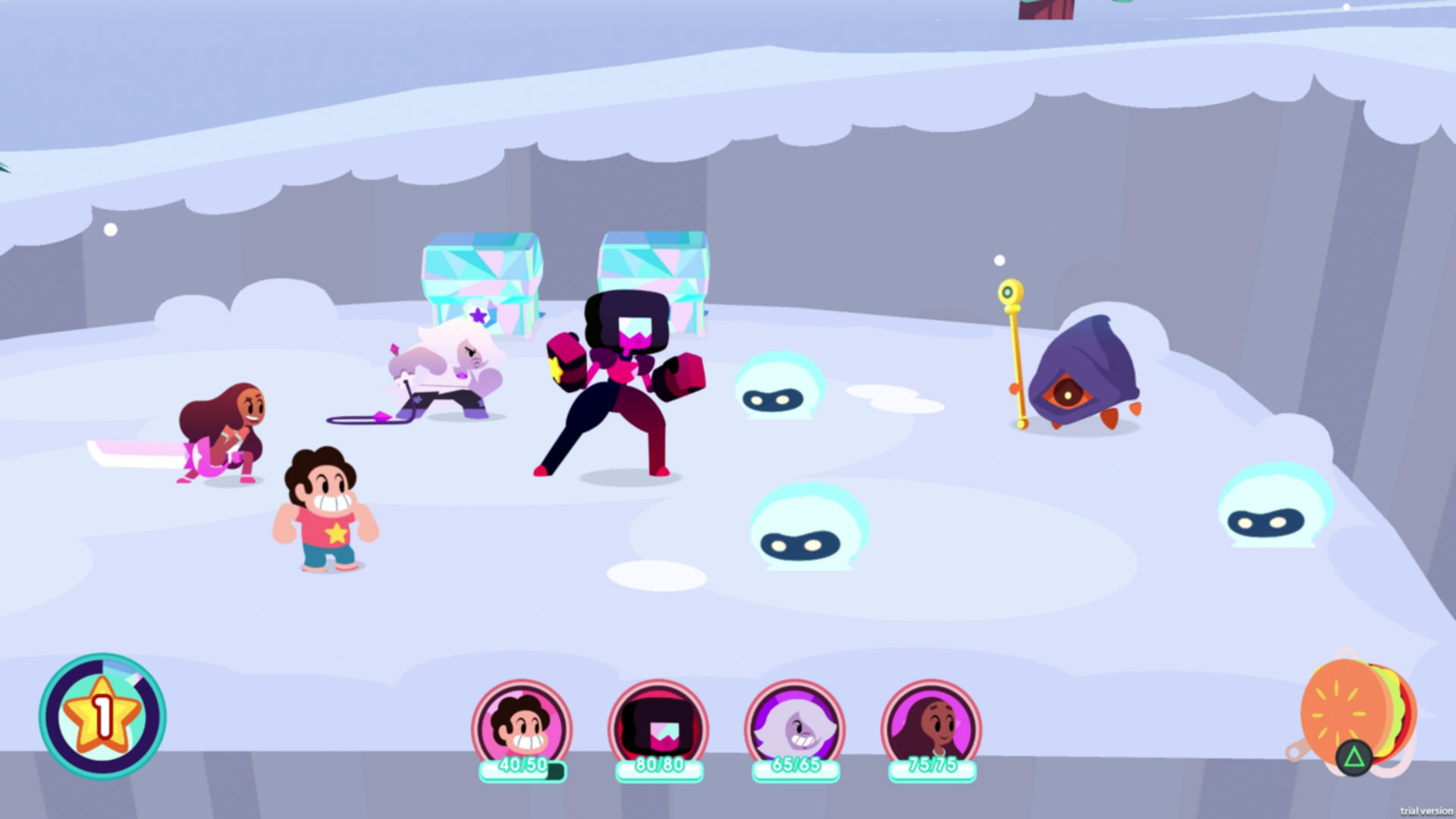 Save the Light is a follow-up to the mobile-exclusive Attack the Light, but no need to worry as the intro includes a quick, and ultra cute, summary of the events up to this point. After Steven and the Crystal Gems defeated an army of light monsters born from a mysterious prism with the power of love and friendship, Steven’s peaceful Beach City life is interrupted once again by brand new villain, Hessonite (Christine Baranski!), who’s come from the Gem Homeworld to reclaim the light prism and unleash yet another army of light monsters. But this time, Steven wants to save his new light prism friend and gets help from not only Garnet, Amethyst, and Pearl, but his best friend Connie, his dad Greg, and new Crystal Gem recruit Peridot.

With 2D characters moving around a 3D plane, Save the Light pops immediately. Steven Universe‘s already gorgeous palette translates well to this and the character design lends itself to a less detailed, round look overall. The enemy monsters are a little unimpressive in comparison, but at least the new villain Hessonite is unique among the other characters. The focus on primary colors and pastels is pretty neat. The environments themselves can feel bland, but definitely fare better when visiting the series’ famous spots like the Strawberry Battlefield and Lapis and Peridot’s farm house.

Moving around, however, is less wholesome. Save the Light‘s deliberate pacing means there’s a bit of a wait when getting from place to place. Taking more than a few cues from the Paper Mario series, the walking pace of the characters takes some time to get used to. It’s somewhat grating at first given that the first area, Steven’s home and Beach City, is wide open and took longer than I would’ve liked to traverse. Other areas alleviate this by being more linear and compact (with a few branching paths for collectible goodies), and the addition of warp pads adds fast-travel points between the areas (though walking to each one can be troublesome as well). Given the environments can be a little flat, as mentioned, walking is less atmospheric than it should be considering how good its soundtrack can be at moments.

But the real star of the show are Save the Light‘s battles. Blending both real-time and turn-based RPG elements, battles are activated by interacting with enemies on the map (either attacking or being attacked), spreading out the characters on a 2D plane in random spots with some even being placed behind enemies, and then there’s a lot more waiting. Battles are in real time, but moves are set within a star meter with a cooldown period. The battle pauses when selecting a character’s move, which all take a set number of star points, and restarts when the moves are selected. If an enemy is moving closer, for example, you can pause the battle by choosing a move, take a breath, and figure out what to do next. It’s a nice little system, and you can’t abuse it given the limited number of star points or the fact you can’t pause when an enemy attacks.

But when you’re out of star points, you’re waiting for it to refill again. During this time, enemies will take potshots at you, but given how slow they move around and how long it takes for their moves to launch, there’s a ton of waiting around involved during each fight. There’s an attempt to fix the waiting as each attack does more damage with timed button presses (and vice versa when blocking), and getting a “Perfect” rating fills your star meter a tad more. And the random placement of your party and the enemies can add an extra tactical layer, as both sides can utilize cliff damage for an extra oomph, but only enemies can freely move around screen. It’s a bit of a letdown to see certain enemies being able to move closer to you before attacking to only watch your character attack, then retreat back to their designated spot even if it places them precariously over a cliff edge.

There’s an attempt here to liven things up beyond timed button presses, and they’re quite a treat for fans. As characters help each other take out enemies or give kudos for perfect blocks, you build a relationship meter between the two of them. A full relationship meter (which can take more than one battle to build, if you’re not constantly getting perfects) nets two characters a special move. Some give each other buffs, or have an attack that deals a good amount of damage, but you can also fuse two of the Gems into a powerful character with a new set of moves. But even with these nuances in battle, on more than one occasion per fight, nothing moves for an extended period of time and it deflates the excitement. 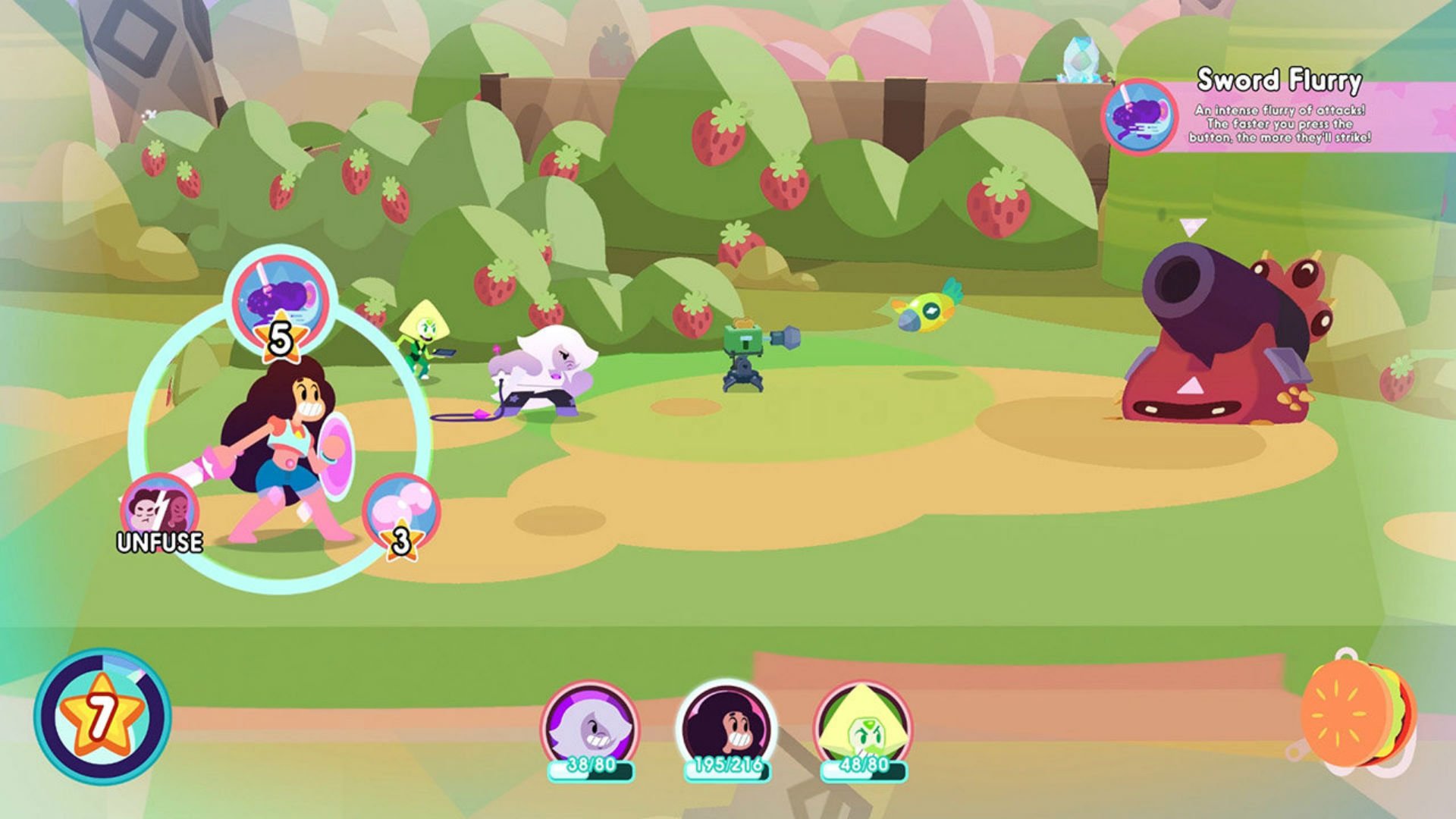 I really wanted to have more fun with Steven Universe: Save the Light than I did. It’s got a lot of interesting ideas in theory, but the longer I played, the more I felt my feet drag. Making matters worse, it tends to have a bit of a loading problem. Getting a few hiccups before the adventure even begins is a bad sign for sure, but it really exacerbated the wait times I felt when playing. And I hope this isn’t the experience for everyone, but it even froze on me during five battles when it couldn’t load the multiple moves happening on screen.

To be honest, each time I reset and lost my progress I had to sit and wonder whether or not I wanted to go through those certain areas again. In the end, I only continued because of professional courtesy but I’m sure only the truly dedicated will put up with this in normal circumstances.