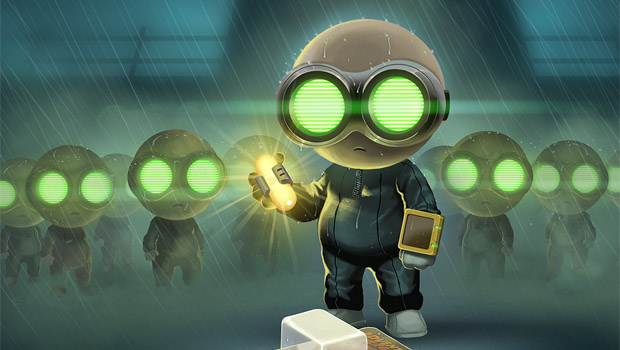 No trace in the crowd

When Stealth Bastard released four years ago as a freeware title, it was easier to get excited about 2D puzzle platformer games. In the time since, Curve released an expanded version to Steam and ported that game to consoles, now rebranded Stealth Inc., before launching a proper sequel.

That sequel has arrived in a very different time. 2D platformers with puzzle-based stages feel almost common now and Stealth Inc. 2, while competent, doesn’t stand out so much.

In Stealth Inc. 2 the player controls a quality assurance clone, created for the purpose of testing products in dangerous situations and intended to be disposable. After surviving a test meant to kill them, the clone becomes aware of their nature and breaks loose into the facility, where they discover other trapped clones and an employee determined to kill them in service of a high productivity rating.

To free the other clones and escape the PTI Complex, the player must traverse six zones where products are being tested. Each contains test chambers, progressively complex environmental puzzle stages focused on a different product. Test chambers are completed by accessing one or more terminals which open a path to the exit, while avoiding death by way of traps including mines, lasers, whirring blades, and the constantly shifting walls of the facility.

That last one is a favorite of the game. Stealth Inc. 2 frequently employs traps which are unforseeable, mostly by crushing the player with walls and usually mocking them after doing so with pithy text. It’s a game where level memorization is fundamental to play, an element reinforced by the rank-based scoring system which grades on completion time, number of deaths and the number of times spotted by enemies. While it does occasionally feel a bit mean-spirited, regular checkpoints within a test chamber usually mean that little ground is actually lost when it happens, softening the blow.

The first zone, a testing area for night-vision goggles from which the player initially escapes into the larger facility, introduces basic elements common throughout the remainder of the game. The player’s clone can run, jump, and cling to certain ledges, while encountering environmental objects (like pressure switches, force fields, and infrared beams), enemy turrets and robots, and the simple lighting system which determines how visible the clone is.

Zones after this introduction each provide an additional piece of equipment around which all test chambers in the zone will revolve. The products vary in their range of function and the simplest objects generally provide the broadest possibilities. The Inflate-A-Mate, a small device which may be thrown and then enlarged remotely to become a rectangular block, is the most utilitarian by far. It can function as a weight for buttons, a platform for climbing or standing on, a wedge to stop moving walls, and a barrier to block lasers or create shadows. It can even be thrown over enemies and expanded mid-flight to crush them or provide a boost for high jumps.

The other gadgets may not have as much range, but they have enough to justify ten stages in which to explore them, at least. The “Me Too” lets the player create a second clone, with both clones responding simultaneously to commands and allowing for one to be killed without consequence. A pair of teleporter beacons enables instant relocation for both the player and enemy robots, while a portable light illuminates paths and activates special switches.

The least interesting of the gadgets, the “Jack Boy,” allows the player to assume control of robots, provided they can sneak up on them and successfully time the use of the device. And while it’s fun to control the enemies, the very fact that the robots are the only element the gadget interacts with gives it limited application. It doesn’t take long to realize that for an entire zone you will tag the back of at least one robot per test chamber because that’s all your gadget does.

It’s forgivable, especially as there is clever level design at work. Determining the proper approach to clearing a test chamber, where to throw gadgets and what objects to interact with first, is an enjoyable process if you don’t mind the occasional bit of trial-and-error learning. A few stages verge on maddening in their difficulty, but these are rare and Stealth Inc. 2 is a moderate challenge, though total completion will require thorough and riskier exploration of stages to free hidden clones.

Completing the eight required test chambers in a zone rewards the player with that zone’s gadget for use in the facility overworld, necessary to enter the next zone and providing ways to reach collectible items and bonus test chambers. Completing zones also opens up the facility to provide easier access between previously explored areas and aid in the hunt for these extras.

The previous Stealth Inc. had no such overworld; levels were instead selected from a menu. The addition does give the game a greater sense of cohesion by minimizing interruption of play and serves the sparse plot with more opportunities for taunting from the scientist (the necessity of which is questionable), but not much more than that. Moving from one door to the next is rarely compelling. There are few enemies and those that exist present little to no challenge, making these passages mostly consist of stuff to clamber over on the way to something worthwhile.

It seems like the overworld should be fun, too. As the player accumulates more of the gadgets, the potential is there for complex puzzles requiring the use of multiple items. The way equipment works winds up limiting a lot of that potential, as only one tool can be in the field at a time anc changing tools returns any thrown objects.

Stealth Inc. 2 is by no means a bad 2D puzzle platformer, but it doesn’t stand out in a genre which has had some impressive entries in the past year. Attempts to improve the experience of its predecessor by adding an overworld feel more like padding than an increase in scope and many of its levels necessitate foreknowledge to complete them successfully. Still, there are pleasures to be found in discovering the many facets of the tools and the puzzles do an admirable job of squeezing out their individual potential in clever ways.