My initial impression of Undead Labs’ State of Decay was not exactly forgiving. Significant screen-tearing, a choppy frame rate, an intro that places me directly into button mashing combat without context, the game’s lurch of a start prepared me for a cheap and nasty waste of time.

I was not prepared for what it soon became — a savvy simulator based in compromise, designed to satisfy one’s need for power acquisition while tempering it with a perpetual feeling of stress and hopelessness.

First impressions can be deceptive, for State of Decay boldly shrugs off the shackles of its humble presentation to live up to its own ambition with surprising ease. 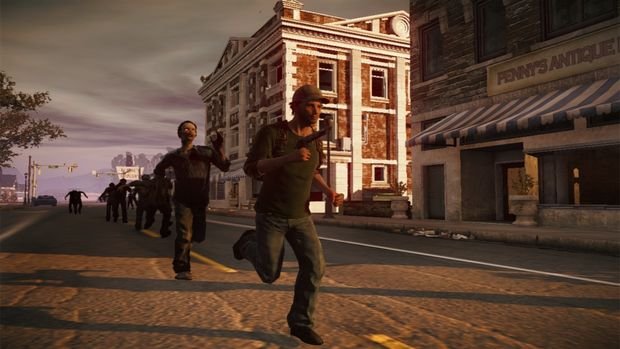 State of Decay is, essentially, a zombie survival simulator. Combat is involved, and is in fact a large part of the adventure, but the need to smash open zombie heads simply facilitates the most integral aspect — eking out an existence in a harsh and desolate world.

At first, State of Decay‘s premise seems weak. Combat is rough beyond measure, featuring simplistic button mashing and touchy collision detection, while sneaking around involves crouching and moving very slowly. The enemy A.I. isn’t exactly up to snuff, either — a zombie could be chasing you, and literally watch you crouch into some bushes, but it forgets you exist the moment you’re in there. The introductory sequence lasts just long enough for one to believe this is all there is to it, but just before one’s tempted to throw in the towel, it becomes so much more.

In due time, players find themselves at a church maintained by some survivors, and then the real game can begin. As much a simulator as an action game, State of Decay is all about keeping this home base running, and gameplay soon becomes a matter of striking out from headquarters to raid the many houses and establishments of the abandoned town. Keeping morale high, supplies plentiful, and scavengers healthy are all part of the proceedings, and there’s a lot to worry about. Worrying, however, hasn’t ever been quite this enjoyable.

By searching areas within buildings, players can find weapons, health items, and valuable resources to strap on their backs and bring home. Resources consist of food, medicine, ammunition, building materials, and fuel, with each one having its own use. Searching can take a while, but you can speed up the process — at the risk of creating loud noises and drawing a small army of the undead. This type of compromise is common in State of Decay — trading quicker rewards for risks that could prove costly.

State of Decay runs in quasi-real-time, meaning resources drop every real-world day, and certain actions can take literal hours to complete. Even while the game is switched off, events can occur and one may find trouble waiting for them when next logging in. Keeping supplies high, and using material to build and upgrade headquarters facilities such as infirmaries, gardens, and sleeping quarters all minimize the risk of peril. 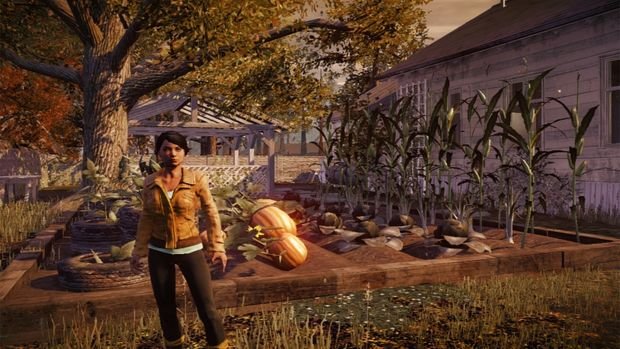 As the game progresses, new potential home bases can be claimed, which leads to more room for extra facilities. No base can house every type of facility though, so players must choose wisely. A training area provides a stamina boost to all characters, while a library can make them smarter and improve their ability to search for items. Personally, I found anything that culminates in stamina increases essential, as everything is governed by this particular stat.

Whether running, jumping, breaking down doors, loading up on gear, or fighting, players need stamina for everything, and it drops fairly quickly. Zombies aren’t a particular threat in terms of raw combat ability, but fighting even a handful can drop stamina considerably, slowing one’s actions and making a player easy prey. On the one hand, it’s a very clever way to make sure large groups of zombies are a genuine threat, while on the other it can make the simple act of moving around town without a car a complete pain in the ass. There are quite a few vehicles, though expect to go through them quickly as they rack up damage like nobody’s business.

Characters gain stats in a manner similar to The Elder Scrolls, where the more you perform a certain action, the more you level up in that particular field. Hitting a lot of zombies improves Combat, which raises your health. Spending time with allies improves Leadership, which allows you to make friends more quickly with NPCs. Running a lot improves Cardio, providing vital stamina boosts that I wish would level up more quickly. One can also become proficient in blunt, edged, or heavy weapons, and unlock special combat moves with each. 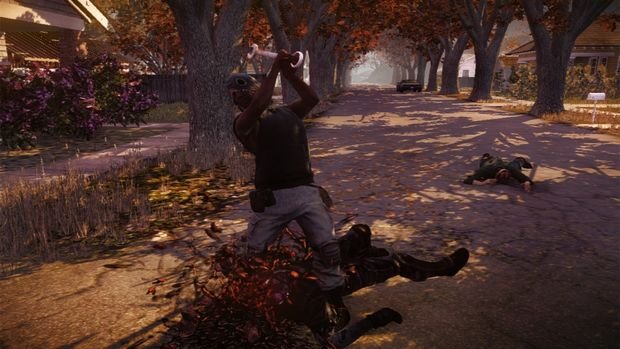 It’s all very well playing a single character and leveling them until they’re a killing machine, but any friendly NPC at headquarters can be played, and swapping out characters is vital. Spending too long out in the world will drop a character’s max stamina, while too much fighting can cause injuries only healed by spending time at base. The more characters you have, the more backup choices at your disposal — but if you have too many survivors, you’ll need beds to benefit from resting stat bonuses.

It’s also well worth noting that death is permanent. If an ally is overwhelmed by zombies, they’ll be brutally torn to pieces, leaving only their carried items behind for recovery by a fresh part member. Allies can also die out in the field if they’ve been sent to pick up resources and become trapped, or if they go missing as a result of too many zombie infestations.

At the time of writing, infestations are proving a controversial mechanic. Certain buildings can become totally overrun by the undead, and will need to be cleared out. If too many infestations occur at any given time, allied characters can go missing at a rapid rate and will require swift rescue. The trouble is that infestations can occur anywhere on the map, and only nearby ones will be noted down. Finding and clearing out the hotspots therefore requires driving all around the world to find the isolated problems and eradicate them. A patch is coming that ensures only infestations close to home will cause problems, but until then, it’s a hassle. 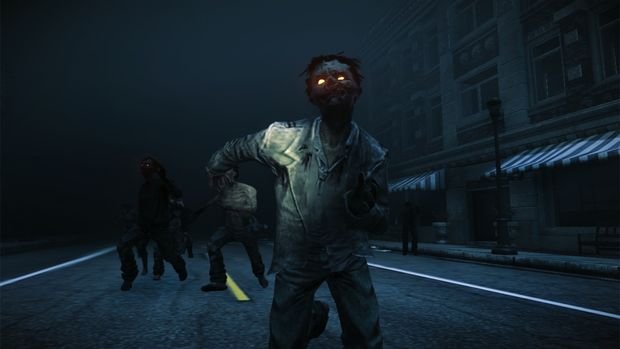 It’s not just gathering resources and keeping everybody happy that makes up State of Decay. There are story missions that can be taken on, though they’re all fairly simple collection or combat sequences without much in the way of real narrative. More interesting are timed, contextual missions that regularly pop up. These can be simple issues such as tracking and hunting one of the more advanced zombie types, to full-on assaults from large zombie hordes that are roaming their way toward HQ. One can also make friends with neighboring settlements, or rescue stranded survivors to boost your own group’s numbers.

State of Decay’s greatest strength is the sheer volume of stuff to do. From building outposts that expand your resources and provide limited safe havens in the field, to accepting trade requests with outsiders, Undead Labs has taken every standard idea in zombie stories and found an interesting way to “gamify” it. In many ways, this is what Terminal Reality attempted with The Walking Dead: Survival Instinct, but here it actually works. There’s always something new to discover in State of Decay — in fact, it took me a few hours to realize every home had a radio room that could be used to contact survivors or locate resources.

One can’t deny this is a clunky experience, for all its depth. Menus are overly complex tabs that throw information at the player and take some time to get a handle on, while controls feel stiff and visual glitches aren’t uncommon. The feeling of roughness experienced at the beginning never really goes away, and I have to say this is an ugly game in terms of interface and graphics. However, while it may not be the most elegant game available, it’s no less effective for its gracelessness. It can be forgiven much simply due to how utterly pleasing the end results turn out to be. 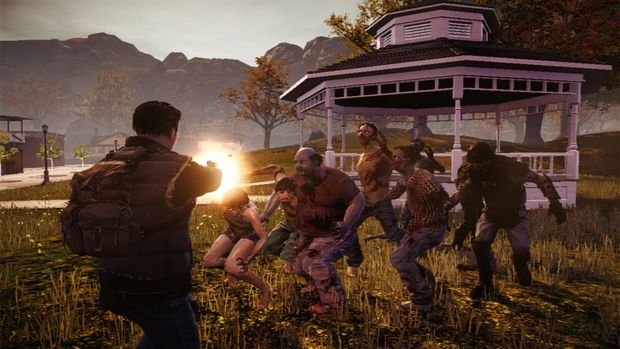 If I had to consistently criticize one thing, however, it’s the dialog. The acting isn’t terrible, and it’s impressive so much audio has been crammed in, but the repeating dialog isn’t especially well written, and gets only more irritating with replays, especially the “Oh, y’know, stuff” and “I shot a pony in the head ha ha” banter that drones on every time the player returns home from a run. Hearing my lovely radio operator tell me something is “disturbing on soooo many levels” every fifteen minutes made me want to toss her to the zombies.

Whatever the case may be, this $20 downloadable game offers more potential content and longevity than most $60 retail experiences out there. There may be a lot prettier games on the market or far more polished experiences, but few that can match State of Decay in terms of raw interactive entertainment. If value is a key motivator in your videogame purchases, State of Decay is a no-brainer, as it offers an absolute ton of amusement per dollar.

I’ve far from described everything available in State of Decay, and that which I have detailed has a lot more to it, but I don’t want this review to go on forever. This is one of those games that could be played forever, and while it’s a bizarre comparison to make, one could easily call it a darker, violent version of Animal Crossing. Like Nintendo’s adored series, this is a game set in a perpetual world, where gathering and growing is key, and there’s no end in sight. If you choose not to do the final story mission, you can keep your little band of survivors alive for as long as you can manage, and the mechanics are just infectious enough to encourage such a goal. 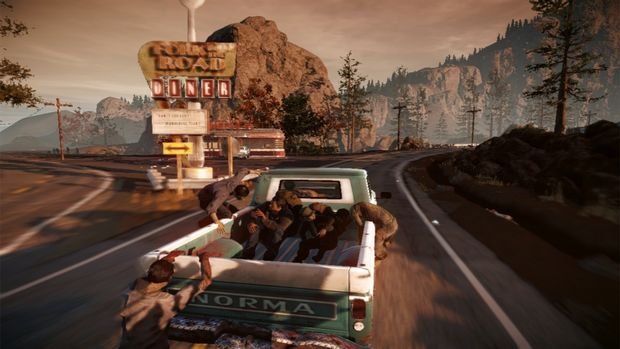 State of Decay is ugly. It looks ugly, and in many ways it plays ugly. However, there’s a simple beauty underneath the frightful veneer, one that surrounds a compelling, interesting, complex, and enslaving little game. There is absolutely more to this game than meets the eye, and despite the overwhelming amount of zombie games vying for our attention, this is certainly one I’m glad to see in the world.

Few zombie games, for all their marketing power and visual sheen, can come close to providing what State of Decay does.