When Starhawk was announced as the follow-up to 2007’s PlayStation 3 exclusive Warhawk, cynical gamers wondered if it would be nothing more than Warhawk in space. Going into this completely cold, I was expecting another generic space marine story. Fortunately for Starhawk, it bucks both of those expectations.

After finishing the single-player campaign, I was pleasantly surprised with how it turned out, and was eager to check out the multiplayer, expecting it to be an excellent tactical experience.

Unfortunately, that’s when Starhawk deviated from my expectations for a second time. 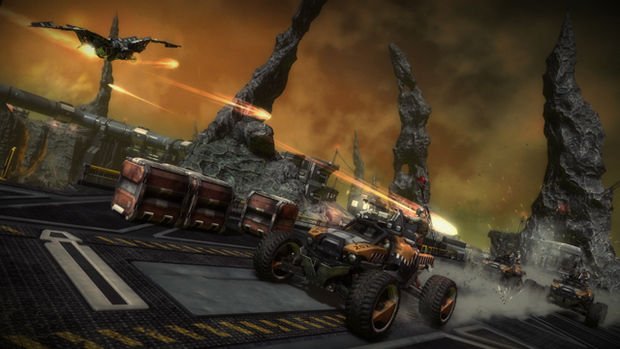 From the outset, Starhawk lets the player know that it isn’t going to be just like all the other science fiction-themed third-person shooters. Set in a galaxy where small human colonies were set up to harvest a powerful energy source called rift, Starhawk takes on a space western genre not unlike that seen in Firefly. Players control Emmet, a mercenary of sorts, who is hired to protect the rift-mining colonies from raids by the Outcasts, a group of former humans who have endured so much rift exposure that they’ve become mutated.

The space western setting is exploited to its fullest, complete with hoverbikes in place of horses, barren desert planets, and even a space train robbery. The music is an especially nice touch, with sweeping woodwind melodies that accompany vehicular movement and combat, and more understated background music while traveling on foot.

Vehicular combat is central to Starhawk, as it was in Warhawk. In addition to the aforementioned hoverbikes, there are also trucks (complete with a mounted machine gun, of course), tanks, and the eponymous Hawks. Hawks are like small fighter jets that can transform into bipedal mechs, which is every bit as cool as it sounds. There are a handful of missions that require the use of Hawks, but many are open ended, letting the player choose how to deal with the threat. 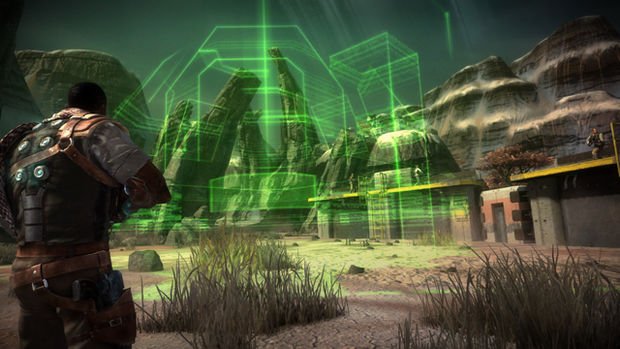 The really surprising gameplay addition that helps to make Starhawk especially unique is the Build-and-Battle system. At the cost of some rift, Emmet can call his partner Cutter, who is constantly orbiting the current area, ready to drop supplies down for Emmet’s use.

It starts off fairly simple, with things like walls and turrets, which call to mind a very Iron Brigade feeling, but it expands from there to include customly placed bunkers, sniper towers, jetpacks, reinforcement areas, garages, and even Hawk landing pads. The substantial amount of freedom given is a huge plus; for instance, a player can be defensive with walls and turrets, or instead put up a landing pad in order to take control of a Hawk and go on the offensive.

With the Build-and-Battle system, Starhawk does a decent job at keeping missions feeling fresh. There are frequently multiple possible solutions to a particular problem, though on some levels your capability is limited in order to encourage variety. As one who never became entirely comfortable flying a Hawk, I can appreciate the levels that require it, but I can appreciate even more the levels that allow it as an option alongside other equally viable and completely different paths to victory.

While the gameplay and setting are interesting, the story itself falls a little flat. A lot of it is told via graphic novel-esque cutscenes. While the cutscenes look great, the backstory is not particularly well conveyed. At one point, there is a big reveal of the evil mastermind behind all of the raids, and it’s clear that Emmet is emotionally affected by it, but it isn’t explained to the player why that is until later, and by then, the moment has passed. Near the end, there is another scene that is clearly meant to be emotionally heavy, but with a disconnect between characters Emmet cares about and characters the player cares about, it seems melodramatic at best. It is not the worst videogame story ever, and it certainly gets points for being relatively unique, but Starhawk won’t be winning any awards for its narrative. 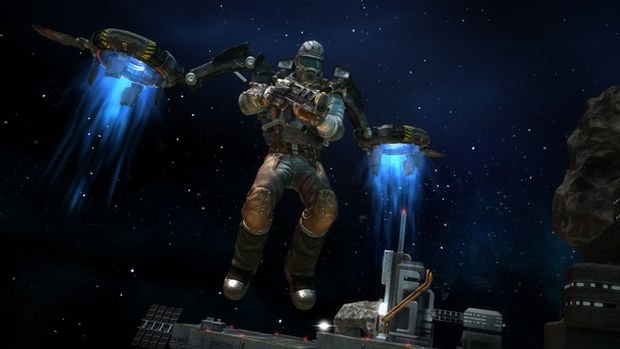 Of course, when it comes to shooters, many can overlook mediocre storytelling if the main focus of the game is in the multiplayer. Herein is my biggest disappointment with Starhawk. After enjoying the campaign immensely, I expected the multiplayer to be a deeply tactical, team-based affair. And it certainly tries to be that, but few small issues compound to keep it from being truly great.

The most noticeable problem with the multiplayer is the lag. It is a strange breed of lag, where the player’s own movements and actions are never delayed, but the consequences of those actions are, and by significant fractions of a second. For instance, when playing offline, a few shots from the default assault rifle will explode a barrel of rift. The same number of shots will do that online, but the explosion won’t occur immediately, causing the player to waste several shots.

More frustrating is the PvP combat, where a rocket can detonate near an enemy infantryman, but far enough that there may be doubt about whether it would be a kill, causing the player to wait until the explosion presumably registers on the other end before the kill is counted. Most annoying is melee combat, which frequently devolves into both combatants circle-strafing and slashing at thin air until one teleports onto the other and delivers a deathblow. While the lag does not make Starhawk unplayable, it definitely creates some irritating situations.

Once the player becomes accustomed to the strange lag, the balance issues begin to pop up. The game is titled Starhawk, so it is not surprising that the Hawks play a central role in the multiplayer, but they are really a dominating force. If one team has more skilled pilots than the other, it is almost an automatic win. The Hawks are faster than any of the land vehicles, and they are equipped with enough countermeasures that they are incredibly difficult to take down from anywhere other than another Hawk. Naturally, given their speed, maneuverability, and strength against infantry, they are a perfect spawn-camping weapon. A particularly unsportsmanlike Hawk pilot can camp an enemy’s spawn in mech form, stomp on any infantry that get near, fire a huge assortment of weapons, and quickly convert to fighter form to make a getaway if things get too heated.

The relative power of the Hawks is pretty well known, and a game mode exists that specifically excludes Hawks from being buildable. Unsurprisingly, these are some of the most popular game modes online. 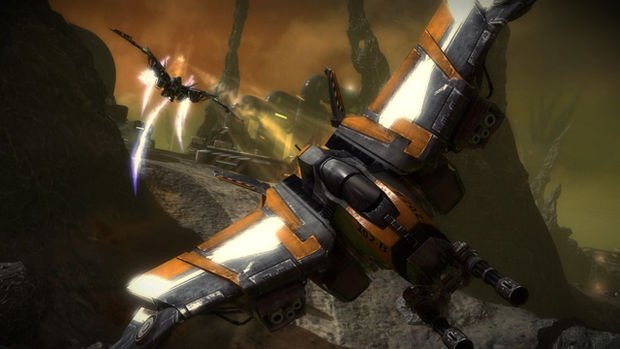 Past the Hawks, each player can also earn one Skill to equip. Many of these are small bonuses, and not unlike Perks seen in the recent Call of Duty games. Some of these include extra ammunition, always spawning with a particular weapon, or the ability to survive a vehicle explosion. One Skill in particular seems overwhelmingly powerful, and as a result, most players who have it use it. It allows you to destroy enemy buildings and vehicles with melee attacks, which is something that can normally only be done with grenades, rockets, or vehicles.

Grenades and rockets are not infinite, so unless a bunker is nearby, they aren’t a viable option for building destruction. Vehicles are expensive, and prone to destruction themselves. Melee attacks are infinite and quick. There is simply nothing more disheartening than saving up rift for half a game to spend it on one of the most expensive buildings only to have one lone enemy ride in on a cheap bike and madly slash at it for a few seconds to topple it.

Another thing that makes multiplayer less enjoyable than I had expected it to be is actually not the fault of Lightbox at all. For a game that requires as much coordination as Starhawk, there are disconcertingly few people playing it with headsets. It is a pretty common tactic to begin a match and immediately spawn a hoverbike corral, then hop on the bike and rush the enemy before they can put up significant defenses. It is not an awful tactic to employ, but it becomes increasingly less useful the more teammates do it. The total number of buildings per team is limited, and having a half dozen corrals wastes rift as well as slots for buildings. A well-organized team will have some players in charge of defense and others in charge of offense, but such a team is an impossibility if nobody communicates. 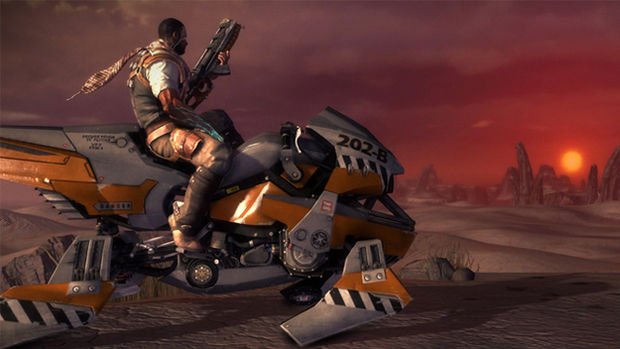 Lastly, Starhawk features no mid-game team balancing. If a player drops out and nobody new joins, his team is at a disadvantage, causing a cascade of poor performance leading to more dropouts. While being switched to a losing team can be annoying for the one person who is switched, not having any functionality for it is annoying for the entire team that is put at a disadvantage.

Otherwise, there are some cool ideas to be found in the multiplayer. In addition to the usual team deathmatch and capture the flag modes, there is also a mode called Zones, which tasks players with holding points on the map. As one team’s influence increases around one of these points, the zone around it grows, providing a bigger area for teammates to spawn. Spawning itself is pretty well done, where the player designates his drop zone and careens toward the ground with a little bit of control over the pod. Landing on an enemy kills him, so spawn campers who are not paying enough attention can get some retribution, but most skilled players can easily avoid a falling pod.

All in all, the multiplayer portion of Starhawk is not bad. The disappointment stems from the notion that it could have been truly great, but a few design decisions and strange lag keep it from achieving that. As a single-player experience, Starhawk exceeds expectations, and I can wholeheartedly recommend it for those who prefer to play alone, if only to try out the undeniably cool Build-and-Battle system.