I sense much TILT in you…

Back in February, Zen Studios released three tables based on the Star Wars series, adding to the already vast library of tables for Pinball FX2. They were fantastic, diverse, and just as feature-rich as the other tables for the game. Many believed it would be hard for the studio to match that collection.

These newest tables not only match the previous set but manage to surpass it. 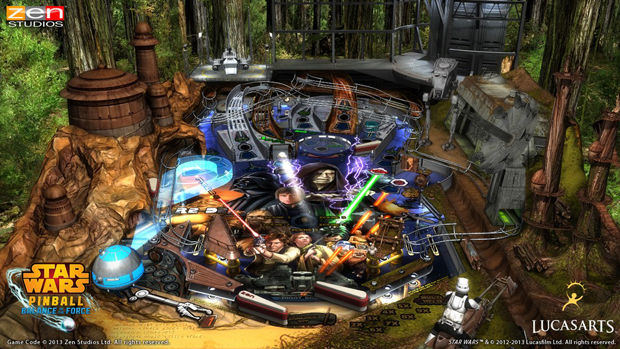 The Star Wars franchise was a perfect choice for a set of pinball tables, and is arguably one of the best sets Zen Studios released for Pinball FX2. Once again, it is offering three themed tables, each filled with unique sets of trials, challenges, and special events that just wouldn’t be able to occur on a real table in the arcades of yore. Full of the iconic sights and sounds of the films, there’s a lot to take in with this set, and each table is better than the last.

We’ll start with the Episode VI table. Set on Endor, many of the elements of the last half of the film are represented, with the Empire base (complete with AT-ST guarding the front) and biker scouts lining the sides. Bright and vibrant, this table has the most ramps, nooks, and tricks to keep you playing, attempting to best your high score with each turn. As before, there are various places to lock or lose you ball, and multiple paths that trigger specific scenes reminiscent of the film.

Since this table is based on one particular film and not just elements from the series, you’ll hear a lot of specific lines of dialogue recreated here. None of the original actors’ performances are used, and some are just trying too hard to sound like they came from the movie. It’s a bit jarring, and sadly, on this table especially, you hear a lot of repeated dialogue. Thankfully, this is my only issue with the table. 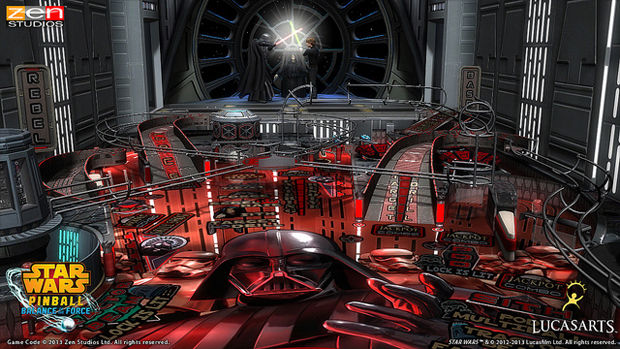 As with all three of the tables, multiple routes along the lanes and ramps yield multipliers that unlock special missions; ones that often take you outside of the playing field of the pinball table. One such example on the Episode VI table has you maneuvering a speeder bike using the flippers, trying to either steer around trees by flinging the ball down the right or left lane at the front of the bike, or down the center to fire your blaster. It’s a bit disorienting, but a neat little diversion — though some folks may not like the separation from the table game itself.

The next table is based on the series’ iconic villain (or centerpiece, if you allow the prequels to direct that idea), Darth Vader. Offset in blacks, reds, and chrome, this table is one of the coolest looking. Alas, it is also one of the blandest, feature-wise. There’s not a whole lot of ramps or instances to encounter at first glance, but with time and skill, there are still a lot of cool bits to uncover.

From the outset, you can chose to begin with the assemblage of Vader on the operating table by directing the pinball into a series of robotic arms used to build the Sith lord. From there, scoring allows you the opportunity to battle through such iconic set-pieces as the lightsaber duel with Obi-Wan, or even a trench battle on the Death Star. Swerving your way around pillars using the flippers is again utilized, but somehow manages to be more frantic on this table. 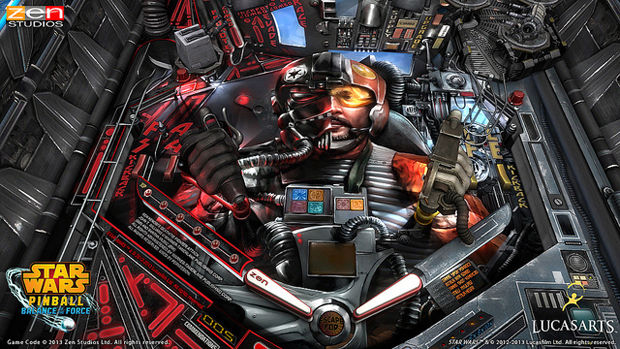 Finally, there’s my favorite table, Starfighter Assault. Split down the center, you choose to play as an Imperial Tie-Fighter or a Rebel Alliance X-Wing pilot, which determines which side of the table your ball is launched from. Missions vary depending on which side you chose, but there’s always a ton of things going on. Bumpers are connected to blaster turrets, and X-Wings and Tie-Fighters zoom over the table to be blasted down during play.

This table is arguably the most interactive, as you can actually earn upgrades during play to boost your turrets, your “fleet” of ships, and even the jackpot scores. As before, there’s missions that take you away from the table, but this time around, it’s a mock-up of the classic Galaga, with you controlling the direction of the ship with the flippers, and firing lasers with the launch button.

I actually enjoy the moments where the action left the traditional pinball game, but I know not everyone shares my affinity for these sequences. Regardless of that, the tables as a whole are fantastic to play. There’s so many different paths to find, skill shots to master, and challenges to unlock that you may not even see half of what they offer even on your 50th playthrough.

It’s impossible not to have fun with these tables, unless you just don’t like Star Wars at all, or pinball. For those who do, these tables are the cream of the crop, offering everything you want not only in a Star Wars pinball game, but in a pinball game more generally.