Ready are you? What know you of ready?

Star Wars has been a part of my reality ever since my parents showed me the first film on VHS. From there I attended the release of every movie in the series, including the re-releases of the original trilogy — if you’re wondering, I’m an Empire man.

I’m glad that I had such an affinity towards Star Wars at such a young age, because I instantly gravitated towards the games, which for the most part, were pretty spectacular (shoutout to Jedi Knight). But not all of them are created equal. Star Wars Battlefront falters a bit, hiding behind high production values while the actual shooting bits suffer. 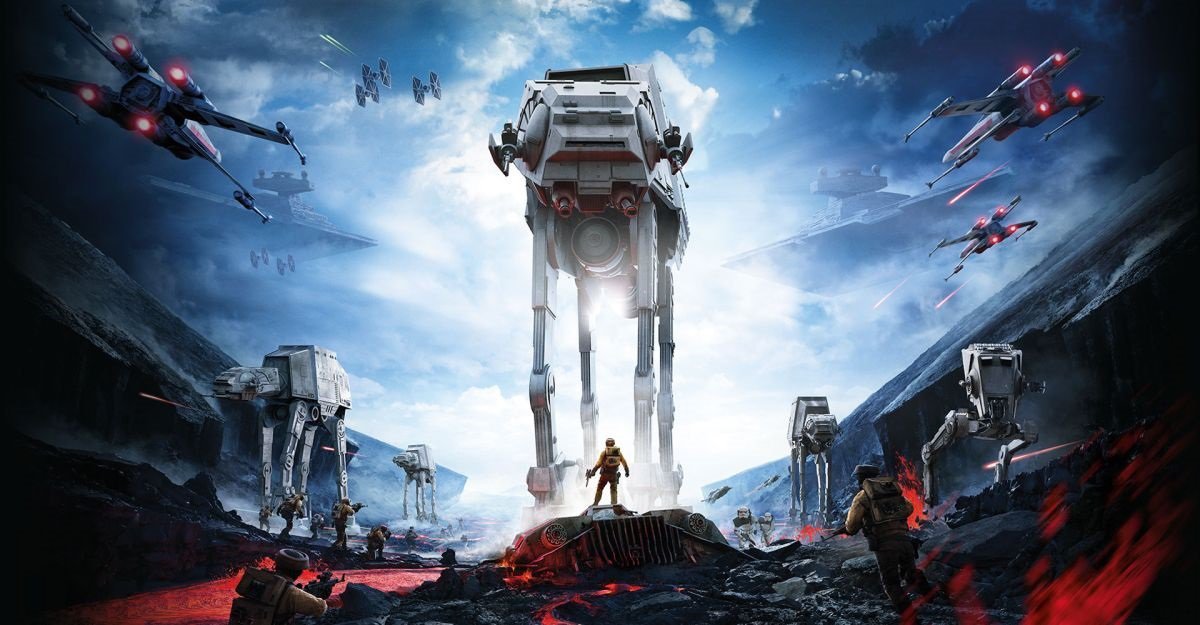 My main problem with Star Wars Battlefront is how arcadey the game feels, when it’s very clear DICE is trying to push a fully-fledged shooter on you. The end result is a Frankenstein’s monster of sorts, with a lot of fun bits, and some elements of overproduction and bloat fixed in to boot. Let’s start with how the game handles class creation.

“Cards” are basically uninspired loadout options, with the tired gating process to boot. Why does the game feature a “credits” system on top of ranked level gating? Call of Duty solved this conundrum ages ago with tokens, which simplify everything with a singular in-game currency that you can use to unlock things. With Battlefront, it feels like DICE is actively gating you at every turn, and willingly deterring you from experimentation. Once you actually open up your options they aren’t exactly mind-blowing either, with generic powers like “focus fire” (more temporary accuracy), or Thermal Detonators, which are just grenades. The only standout is the jump pack.

All of the aesthetic options lack personality as well, and beyond the token gender and race choices, everything looks the same. Whereas previous titles would allow players to choose between multiple races with drastically different abilities (read: droids), every Battlefront player is humanoid in nature, whether they’re a Twi’lek rebel or a Stormtrooper, they all operate the same.

That isn’t to say that the game isn’t fun. Locations are sprawling and full of life, even if the character models aren’t nearly as vibrant. Every single environment is detailed to the point where it looks like it was taken directly from the films, and most of the time, there’s a gigantic battle playing out in the skies above, adding a dire feel to every match.

I really like most of the modes, particularly Supremacy, Fighter Squadron, and Hero Hunt. There are nine in all, and all of them are fine in their own way. Supremacy is basically the new core mode of the game, featuring a “capture the point” tug of war system. It fits with Star Wars‘ high-octane action, as tons of different vehicles are scattered about at a frantic pace, to the point where every spawn is interesting. This game type is pretty much always fun when it’s featured in a Battlefront game, and I haven’t had a bad experience yet.

Fighter Squadron, while rudimentary, is also a go-to of mine. Across several landscapes two teams will battle it out in the sky, solely in vehicles. It’s not even close to the thrill of a proper X-Wing or Tie Fighter game, but again, as an arcade-like experience, it does the trick. Barrel rolls, quick turns, shields, and missile locks are all in, and it feels unique enough to set itself apart from other similar titles.

My other standout favorite is Hero Hunt. This one basically teeters from a team-based mode to a free-for-all in an instant, placing a collective of soldiers against one named character — the person to score the killing blow gets to play as that hero. It’s a rush due to the fact that heroes cycle after every death, and fighting the jet-pack wielding Boba Fett is a completely different experience than taking on a Force user. You’re constantly forced to change up how you approach any given situation (and learn all of their abilities, and how they impact the flow of a match), and the recognizable characters elevate the mode.

Playing online is the gift that keeps on giving with Battlefront. There’s a wide variety of game types to choose from without having so many that the community feels segmented. Even in EA Access there are plenty of people online, and games fill rather quickly.

Then you have the mission mode, which is separate from everything else. I’m not convinced that it’s much more than a fleeting fancy, even with an online or offline co-op partner. The first half consists of basic “versus” battles with or without placing players in the shoes of heroes and villains, and survival essentially amounts to another horde mode. What’s weird about the former is that it’s so incredibly limited, almost for no reason. The game forces you to play with “tokens,” similar to Call of Duty‘s “Kill Confirmed,” and with just four maps, it gets old in an afternoon. Why did it have to be like this? Why aren’t there more maps, and better bots available? It feels rushed, almost like EA had to add in a token offline game type just to have it in there.

The same goes for survival, because while I do like that the wave-based mode has an “end,” unlike many other boring infinite horde modes, there isn’t much to it. Occasionally waves will throw an AT-ST or Tie Fighter at you, and all players have to do is blast it into oblivion with environmental weapons or their normal gear. They have a lot of health even on normal, so it can get incredibly tedious. In short, do not count on a reliable single player component.

Star Wars Battlefront feels authentic in many ways, but that authenticity is aggressively pursued at the cost of gameplay, and is often tacked-on. If you’re in the mood for a relatively shallow shooter with caveats you likely won’t be disappointed, but I wish that DICE had a little more time to polish it and add more substance.

[This review is based on a retail build of the game provided by the publisher, as well as time spent online with the EA Access program on Xbox One, purchased by the reviewer.]