It’s an interesting choice for THQ Nordic to pick the remastered treatment for SpongeBob SquarePants: Battle for Bikini Bottom rather than a full remake. A remake would give the developers the chance to smooth out the experience.

Most licensed 3D platformers of the era were rough around the edges with poor puzzle concepts, boring levels, and other design issues the genre has more or less corrected over time. But with a remaster, or at least with this remaster, there isn’t the opportunity to fix what didn’t work or rethink the concept. With this remaster, it’s simply the old game freshened up with a new coat of paint.

But oh, what a coat of paint it is. 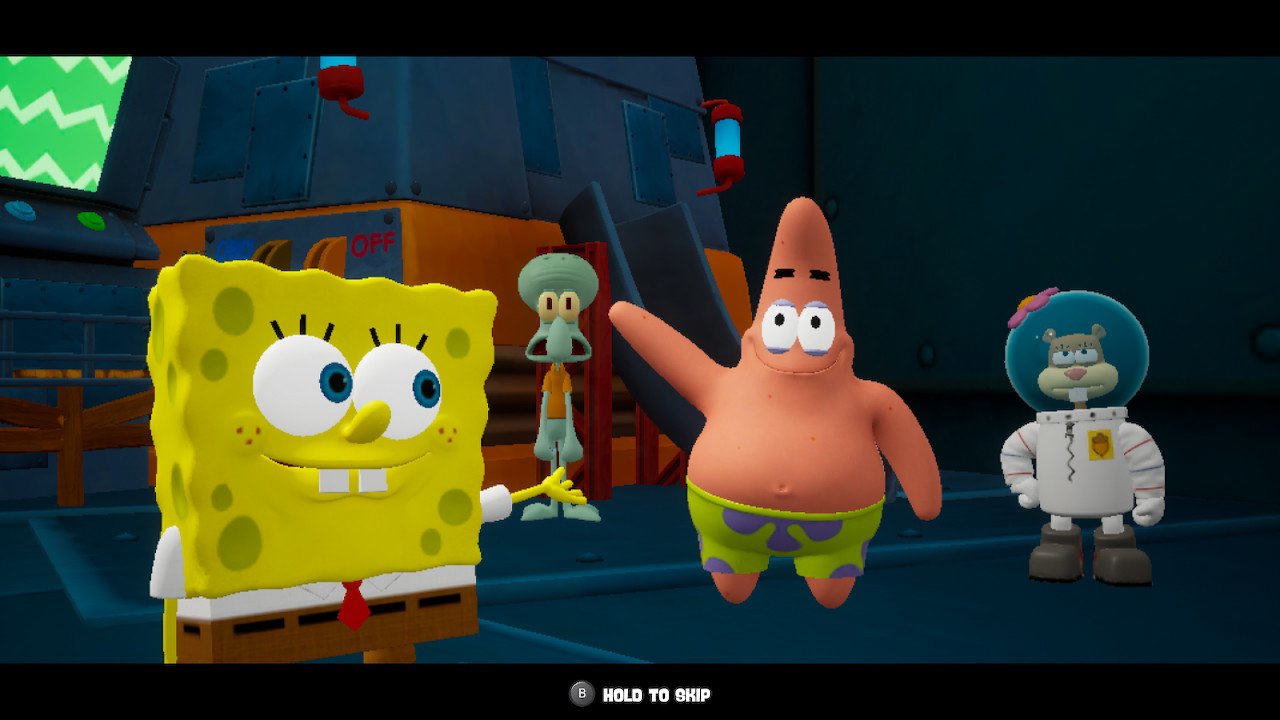 Spongebob SquarePants: Battle for Bikini Bottom Rehydrated is an astoundingly pretty game, one that’s able to capture the look of the cartoon series even while being tied to the layout and structure of the original title. Colors pop and the character models are a massive step up with animations that accurately match the dialog as it’s delivered. Like the comedy from the show itself, the script holds up and the jokes land with outstanding delivery from most of the cartoon’s voice cast.

Despite its thoroughly modern look, this very much feels like a 17-year-old game. Whereas some styles of game design are timeless, I don’t think many licensed products from the early oughts would qualify as such. If anything, Battle for Bikini Bottom Rehydrated plays like a relic of a bygone era. It’s not necessarily a bad game, in fact, I know this is one of the more popular third-party titles from the console generation, but it’s certainly a title that made me say, “Oh right, this is how we used to design levels,” on more than one occasion. Something like the Rolling Ball Area of the Mermailair probably wouldn’t exist in a modern game, or it would at least be a less aggravating version of it. Throughout SpongeBob’s quest to collect the golden spatulas and defeat Plankton’s robot army, there is also an abundance of sliding levels, a design crutch favorited by platformer developers from the era.

Rehydrated will probably find a fanbase within the speedrunning community, just as the original did. It may also end up as a fun game to play with friends in the new multiplayer mode. This two-player horde mode gives you access to seven different characters as you jump from island to island, defeating increasing numbers of robots sent to destroy you by Robo-Squidward, a cut boss from the original game. While you can’t play this mode with an A.I. partner, you can team up with a person locally, online, or with a LAN connection. It really is worth at least one trip through, at least to get a feel of the different playstyles for each character. Squidward’s clarinet attack makes him ideal for long-distance opponents, and he ended up as my favorite of the bunch.

Even if it is just melee combat, going through the multiplayer mode provided a more problem-free experience than the single-player campaign. The hit detection for SpongeBob’s bubble wand is iffy and his ledge grabbing is too sporadic to be reliable. Sandy’s post-swing jump is anemic, and the erratic auto-aiming system for Patrick’s stone heads and watermelons can lead to throws you didn’t want to make. I also experienced multiple instances where a function would work once but wouldn’t work one the next try. Or the next three tries. Nothing crucial like the jump or attack button, those are solid, but Patrick could be awfully unreliable with his throws if, for whatever reason, the game didn’t appreciate when I was pressing the button.

With that said, several parts of what Purple Lamp Studios has put together here are absolute bliss and put a big smile on my face. As a SpongeBob fan, it is nice to venture through a detailed version of Goo Lagoon or the Kelp Forest, and the variety of activities in each level kept things fresh and pushed me to explore the entirety of every biome. It’s a shame Pearl or Karen didn’t make the cut, but that’s a minor quibble. I have far more substantial complaints with the actual build of this remaster.

Battle for Bikini Bottom Rehydrated crashed within the first 15 minutes of play. About an hour after that, the screen went nearly completely black though I could still hear everything happening through my speakers. Anytime I’m in an open area like the hub, the frame rate takes a tumble. Pop-in is frequent throughout, and when combined with the frame rate issue, it makes some levels a real nuisance to play. Load screens can be pretty long and they’re frequent, whether when entering a new area or when you have to restart after dying. Audio is an issue as well. There are some sound effects, such as when you take a bus to a specific level, that are loud and grating. I also witnessed cut scenes with muted dialogue or with a delay in the voice track. 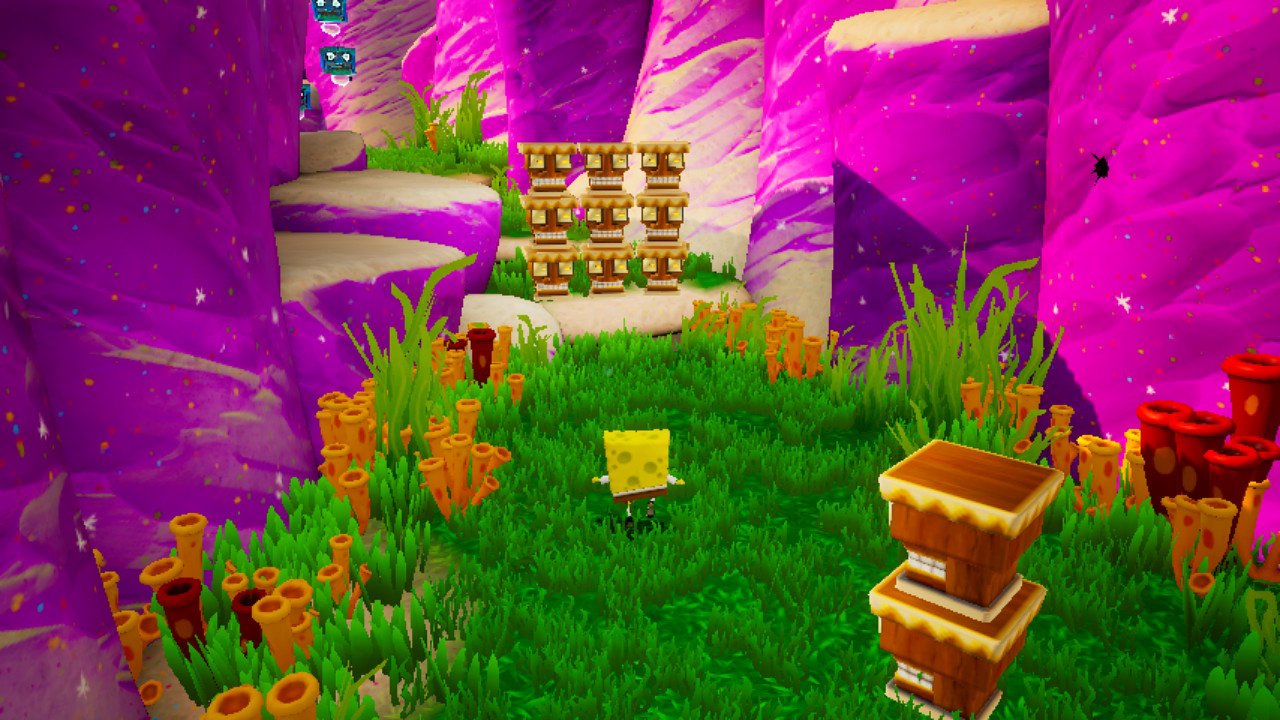 The rules of the game also feel very in flux. Goo, which is the SpongeBob equivalent of water, is a hazard you need to avoid. Some puddles of it are placed casually throughout each level, and touching it will either bounce you back to the ground you started on or kill you instantly. Goo doesn’t take away from your health, so it’s an all-or-nothing thing.

And that’s what I mean when I say Battle For Bikini Bottom is probably a better candidate for a remake than a remaster. Because that’s a bad design choice, something that should have been ironed out for this release. There is no reason why touching goo shouldn’t produce the same result every single time. The auto-aim on Patrick’s throws and Sandy’s rope attack shouldn’t be so much of a crapshoot. Characters shouldn’t fly back five feet when hit, possibly sending them off a cliff and into a loading screen.

With a remake, all of this, along with the often questionable level design, could have been corrected. But with SpongeBob SquarePants: Battle for Bikini Bottom Rehydrated aiming to be as faithful to the original as possible, these issues only serve as a reminder of how much better the industry has become at making 3D platformers.