Nintendo didn’t dive into the ocean when they released the first Splatoon, they dipped their toe in the pool. I vividly recall going to its first preview event years ago, and there was an air of uncertainty with pretty much everyone involved with it. Then it came out, blew the lid off of the idea of Nintendo creating a competitive shooter, became a worldwide phenomenon with hologram concerts, and is now an eSport. Go figure.

You just can’t predict viral success these days, but Splatoon as a whole does have one big advantage over many of its competitors — it’s charming and fun to play. Now we’re finally entering a new era for the series, a full-on campaign expansion. 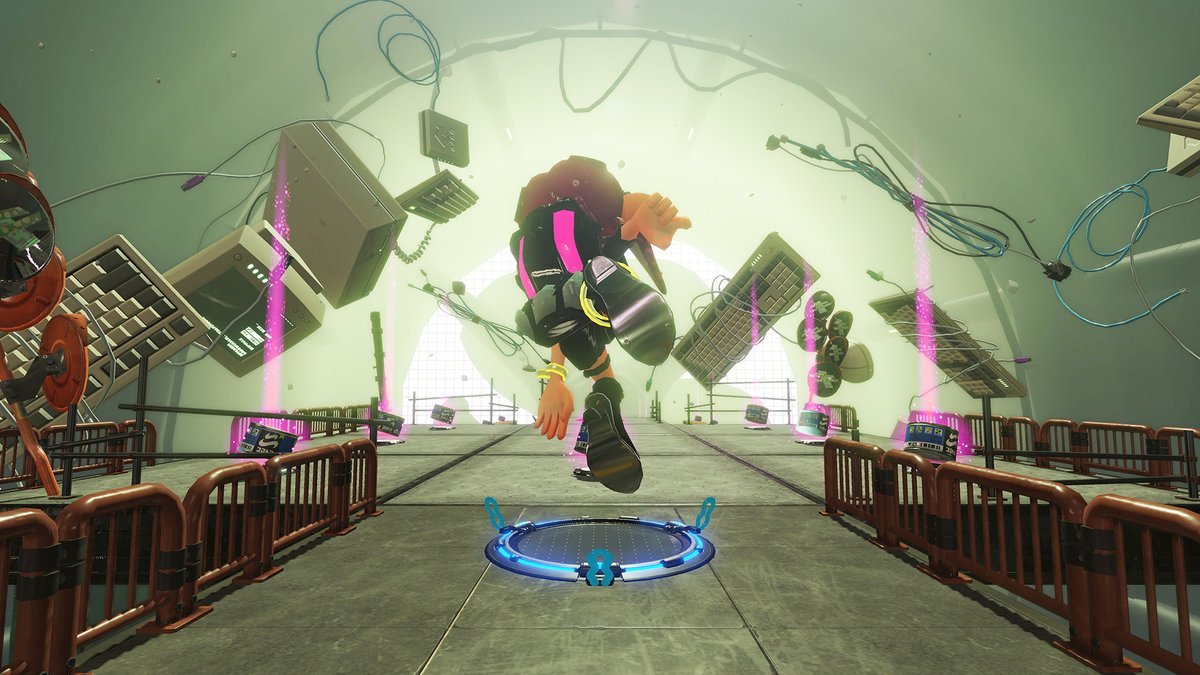 Since the whole “Nintendo DLC” thing can be confusing, even after they’ve adopted the idea for so long, here’s a quick rundown of what the Octo Expansion actually is: it’s an 80-mission solo campaign. Done! That was easy right?

I view the Octo Expansion as a straight take on Metal Gear Solid‘s VR Missions. There’s no rhyme or reason to a lot of these situations, they’re just scenarios that the team put in because they thought it would be fun. Yet, just like VR Missions, it works. Framed by way of a series of subway station maps, you’ll need to navigate a bunch of nodes, finish the levels within, and grab four “thangs” to reach “the promised land” as an agent Octoling. It sounds like a lot to take in but it really isn’t, most of the exposition is silly dialogue, rapping, and getting called “home slice” a lot.

To spice things up there’s a quasi-challenge element in the mix, where you get “points” for completing tests, which are then spent to begin or retry levels as a “fee” — while many levels are locked to one specific loadout, picking certain weapons can up your rewards. You’ll need to spend big too (hey big spender, dig this blender), as some missions are challenge enough to warrant that re-do. That’s not necessarily because of traditional “deaths,” but objective fussiness. If you’re escorting a ball through a board for instance and it falls off a cliff — poof, that’s one of your three lives. One solitary balloon flew away during break the target (and you chose a short-range weapon for the job to make matters worse)? That’s a life, and a paddlin’.

In some cases, it’s a unique rush that fills you with satisfaction when you finish them. One of the most poignant examples is a level where you’re walking on boxes and are tasked with killing a drove of enemies. Each time you miss you’re blowing up precious parts of a finite arena — it really brings back memories of cool old school confrontations like Bowser in Mario 3. Splatoon 2‘s developers really wrung out every mechanic they could think of and put it into this DLC, and I see parallels to the New Super Mario Bros. 2 add-ons where that team was tasked with the exact same thing.

On the other side of the spectrum is the aforementioned tediousness. There’s 80 stages, they can’t all be winners, but it’s a downer to be riding a level track only to find out that it’s capped by one of the several unfun activities. Nothing is insurmountable mind, and it usually only took me a few tries (or just hunkering down and exhibiting patience), they’re just uneven, is all. If you’re really hard pressed to finish something you can also “ask for help” and have it cleared for you –after spending points for a new set of lives and failing at least twice.

80 stages is a lot to get through, but you only need to earn the four thangs by visiting the critical path locations — a rough estimate for that is around five hours (culminating in a more story-esque gauntlet finish), double if you try to do everything. As cool as the “agent” and underground concept is, a lot of the aesthetic shift feels like a re-skin of sorts. The “Sanitized Octarians” are given a cool little lore explanation for why they’re different, but they’re still pretty much the same enemy types as the main game. It’s the same way with the Octolings themselves compared to the squid kids. Seeing little GameCubes fly around in the background is peak Splatoon, but for the most part it’s all very familiar, which occasionally works in its favor.

There are two ancillary bits of this DLC: unlocking an Octoling for multiplayer after campaign completion (cool), “uncovering story secrets” (meh outside of the very end), and netting little poems and sayings after completing each level in the form of “mem cake” items that look like Lucky Charms marshmallows. There’s also a new Octoling amiibo triple-pack set for release sometime this year.

Free updates for Splatoon 2 were set to end in July, but are now extended throughout the entire year. It’s still a good time to play Splatoon, especially if you’re up for a solo intermission and keep your expectations in check.