After all the door kicking, screaming, blindfire, grenade tossing, and turret handling, a soldier always walks away from battle alive with a strong moral compass intact. This last detail is the most disparate departure from reality that modern military shooters make.

Though we like to glorify soldiers in our entertainment, it’s impossible to look past the toll that killing takes on a person’s psyche in real life. To say the least, virtual soldiers seem to have a knack for shrugging off this psychological weight as easily as a shotgun blast to the shin.

Spec Ops, however, is a game that likes to remind the player that every murder is paid in blood or, in the very least, a small loss of identity. As the narrative drives forward. the soldiers of Delta Force start to lose their morality. With no superior to give them orders and no comrades to cheer them on, they are reduced to killing machines walking a long road, hoping for an answer at its ends — not so much unlike the player. 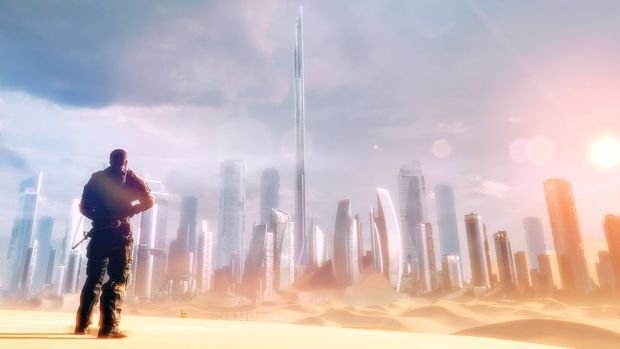 A soldier is nothing without orders and the orders are simple: Infiltrate Dubai to provide recon on missing Colonel John Konrad and his outfit, The Damned 33rd. By the time Captain Martin Walker and his two soldiers, Lugo and Adams, arrive, these orders mean little.

The modern paradise of Dubai has been ravaged by sandstorms, spurring chaos on the streets below. At this point, Walker decides this is a rescue mission, not a reconnaissance mission. It’s not the last order he’ll give his team, but it’s certainly the most innocuous.

Inspired by Heart of Darkness, Spec Ops is a harrowing, unassuming look at modern warfare. It neither glorifies it nor condemns the player and Walker, as tough decisions are made. Do you kill the thief or the soldier that murdered his family in response? Do you rescue the civilians or the opposing agent that may provide you with the information you need? Though Spec Ops‘ decisions are binary — and mostly predetermined — at least the moral views binding behind them aren’t. In Spec Ops, you can only choose the least terrible decision and hope it eventually leads to a positive outcome. 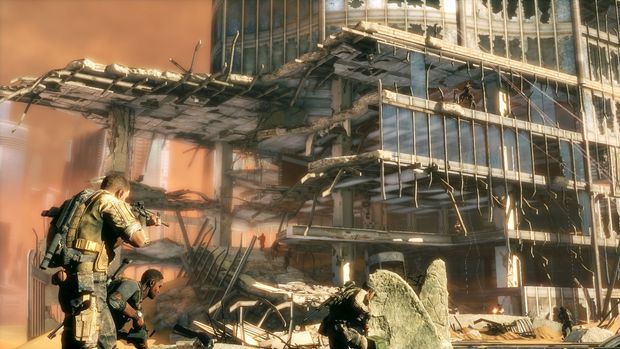 Converse to the lofty narrative direction of the game, Spec Ops plays it safe as far as mechanics are concerned. One in medias res helicopter turret sequence later and you are thrown into cover-based shooter 101: swap cover, roadie run to avoid fire, blindfire when enemies are close, etc.

Though Spec Ops covers the basics, it covers them well, offering some of the most enjoyable cover-based battles since Gears of War popularized the concept. Guns are weighty and difficult to aim, making a tricky headshot feel all the more rewarding. Areas are wide and pregnant with tactical possibilities both horizontally and vertically.

While taking cover feels good, maneuvering around it is a different story. In a misguided attempt to appear realistic, Spec Ops does away with Gears of War dodge-rolls and makes it dumbfoundingly difficult to avoid a grenade. You can’t throw it back, you can’t roll out of the way, and turning and running is more difficult than it should be (you need to double-rap the run button and press in a given direction, only for the game to frequently misread your command.) Once you get to the final chapters of the game, these problems with the game’s combat become hard to ignore. This applies tenfold to the rather lifeless multiplayer, where elevation and good cover will win a firefight nine times out of ten. Every time an enemy/player tosses a grenade near you, forcing you to awkwardly detach from cover and run, you’ll want to throw down the controller.

One thing that puts Spec Ops ahead of the pact is its squad dynamic. For the majority of the game, you’ll have Lugo and Adams to bark orders at. Though you can’t dictate their positioning as you can in the underrated Rainbow Six: Vegas or Mass Effect series, you are able to direct their fire onto a specific enemy. This becomes increasingly helpful since they frequently snipe and lob grenades at targets. Additionally, there are a handful of stealth sequences where you can exploit their snipe command, making these encounters a cakewalk (don’t fret: You can always break stealth.) I love this mechanic because it gives you something to do, while recovering health behind cover. The momentum of battle doesn’t feel like a constant stop-start affair, like Gears of War and Uncharted. 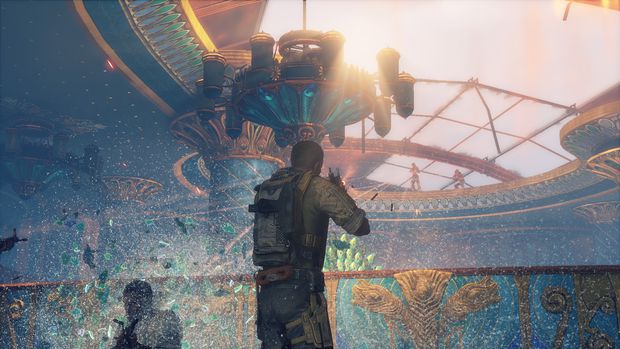 There are occasions where the AI doesn’t act as it should. I encountered a couple instances where a teammate would throw a grenade at an enemy directly in front of me and him, instead of melee him like any rational soldier would. The enemy AI isn’t so hot, either. The big heavy enemies will slowly walk toward your cover and then stand in front of it, as if an invisible barrier blocks their path to your obliteration. This made me succeed in some tough encounters later in the game, but I didn’t feel like I survived by my skill and wits, as a result. The AI is far from broken, but it’s one of the many things that plays directly against the grim reality that Spec Ops’ narrative tries so hard to build.

While Spec Ops often reminded me of Apocalypse Now, there were also many moments where it brought to mind The Rock. Some characters feel cartoonish in their aspirations (a radio DJ barking nonsense throughout the game, for instance), many helicopter chases are had, and the game loves to make things explode: grenades, barrels, buildings, you name it!

The much talked about sand tech and environmental destructibility are nice gimmicks but they don’t drastically change the flow of combat. It’s cathartic to wipe out a turret nest by flooding it with sand, flowing out of a nearby window, but I didn’t feel particularly crafty in shooting the marked objects in question. The scripted sandstorms that block your vision are just plain annoying. 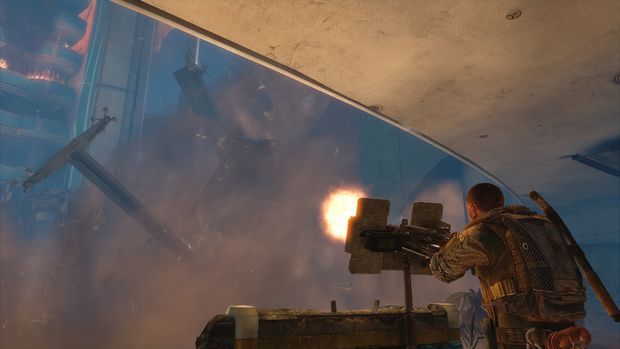 Spec Ops is a mixed bag in its visuals. The game spent a long time in development hell and it shows, particularly in the player models and dull texture work. While the exterior cityscapes are lavish and broad, the interiors rarely capture the luxury and glamor of Dubai. The setting is full of potential, so it’s very disappointing to see the developer rarely make use of it. Instead, we are given a decrepit ghost land full of charred bodies and civilians that feel mythical in their rare appearance, despite the story revolving around their presence. The game isn’t without technical hiccups either, the most criminal of which are the prerecorded cutscenes that are terribly compressed, looking like 360p YouTube videos at times.

Nuance in Spec Ops is restricted to the game’s storytelling which is dense and compelling. I can’t think of another game where I replayed chapters, after beating it, for the sole purpose of fully understanding the gravity of key story moments. While Spec Ops could have delivered some plot details more clearly, there is an appeal to how vague of a web it weaves; at times, leaving some major information to collectible intel items scattered around levels. Sitting through the credits of a game while you piece together its complex story in your head is a rarity in videogames.

There are better cover-based shooters, better multiplayer shooters, and games that deal with moral choice in a more open manner, but Spec Ops isn’t about any of those things even though it includes all of them. At the end of the day, this is a game that drives the player forth by proposing questions; some relating to the plot — you’ll ask “why?” as often as Walker and company — others relating to your own ethics, but all of which are much more compelling devices than anything offered by Spec Ops’ competitors. 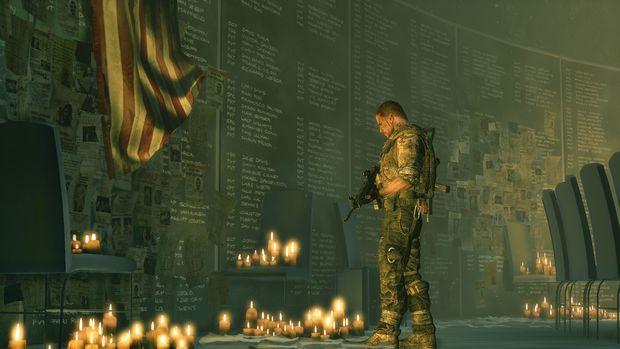 In an odd way, it almost comes as a relief that the multiplayer isn’t worth sticking around for. At worst, it’d be an entertaining distraction for a week. At best, it’d be an ignorable distraction that doesn’t sully a thoughtful, complex narrative about there being no heroes in war. Only killers.

We don’t need to come to terms with killing people, because it’s all fun and games for us. Not so for Captain Walker, who must find reason and purpose in his rampage. Walking that long sandy, bloody road through Dubai is one of the most captivating gaming experiences of 2012 because of it.