THROW DICE FOR THE EMPEROR!

Space Hulk is no stranger to the video game world. It’s had multiple iterations that have tried to capture the feeling of the classic Warhammer 40K board game, but most if not all have fallen short. To attempt to right the drifting mass of former starships, Games Workshop called upon Cyanide Studio to do the board game justice.

For the most part, Cyanide has succeeded with Space Hulk: Tactics, but it’s not without its faults. 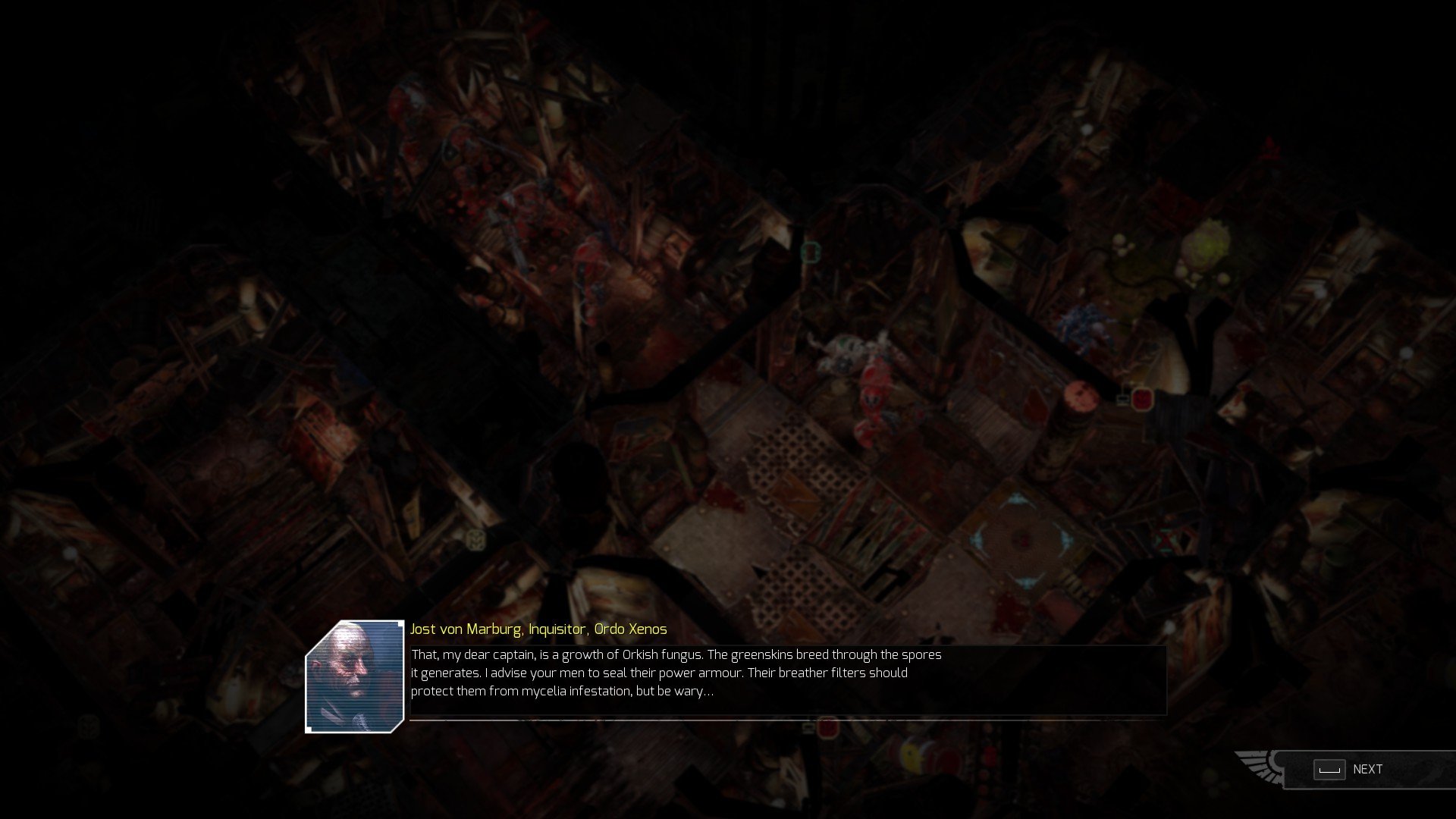 Space Hulk is a claustrophobic asymmetrical tactical strategy game, set in the hallways of starships that have snowballed together as ship wreckage drifts through space. You play as either the religious humanoid Blood Angels or the Xenomorph-like Genestealers. The two factions are opposite of each other, where the Genestealer has agility, the Blood Angels are bulky and slow. While the Blood Angels have the blessing of weapons, Genestealers can for the most part only attack with their claws. Perfectly balanced. At least it should be, more on that in a bit.

Each mission has the two factions going after their own goals, each running counterpart to the others. For the most part, Genestealer missions are always about killing the Blood Angels, while Blood Angel missions can run the gamut from escort, to destruction, to extermination. Because of that, there is a bit more variety to playing as the Blood Angels, but I can’t deny the fun that is playing as the Genestealers with the sole purpose of ruining someone’s plans.

Gameplay is what you’d expect to find with a tactical strategy game. Actions and movement cost AP, since the Blood Angels are so bulky, even turning costs AP so each move must be thought out extensively to optimize AP usage. Different character classes have different abilities, pretty standard stuff with just enough tweaking to keep you on your toes. There is the option to play the game in first-person, which almost takes away the tactical element and turns it into a horror game. Nice for some but for me I never left the tactical view mode.

There is an odd mechanic where you can only move one Genestealer at a time, and when you are done moving your Genestealer you must lock them down to move another one. It’s an addition to the game that doesn’t work that well, and I don’t understand why it was put in. The only other thing that is really new here is the card system, which thankfully does add some nice new spice to the mix.

Every turn you are dealt three cards which are dealt from a deck that is determined by the characters you deploy. You can either use these cards for their effect which is usually stat boosting, or you can trade them in for extra AP to do more action that turn. It’s a nice addition to the battle mechanic but it is also used for character progression and I’m not really the biggest fan of increasing your characters luck chances as the sole progression mechanic for characters.

But in a game where almost everything is determined with a dice roll it fits the feel of the game, even if I don’t like it. 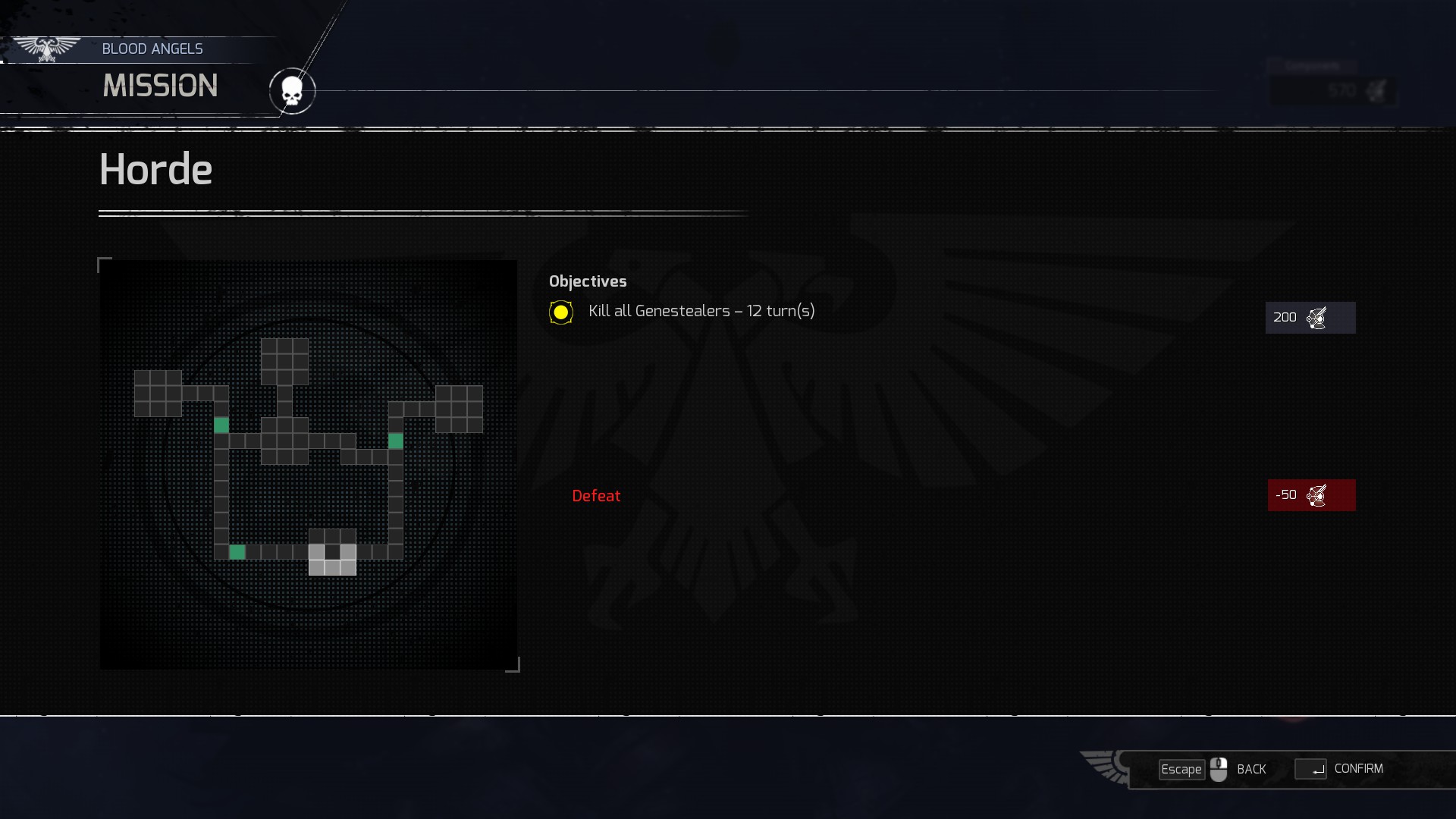 I do however like that every dice roll is shown on screen which makes me feel like I’m keeping an eye on the computer so it doesn’t cheat. The random outcome makes for a nice thrill when you attempt a daring move while still making you think tactically enough to mitigate risks. That being said, it can get frustrating when your prayers to RNGesus fall on deaf ears and your well-planned assault crumbles but thems the breaks I suppose.

There is a decent campaign attached to the game, one for each faction. The Blood Angel campaign is about what you would expect from a Warhammer 40K story. Lots of squabbling between factions, plenty of cries of “brother”, some casual xenocide, exactly what you’d want. I personally found the Genestealer campaign to be more intriguing though because it is told from the perspective of an Imperium Inquisitor telling the tale of fallen Space Marine squads. It’s got a nice tragic feel to it that I think fits with the universe really well. I’m also a depressing bastard so you know, take that with a grain of salt.

While I enjoy the ability to play single player, the Genestealer AI is pretty disappointing in the current build of the game. It’s not threatening and to put it bluntly it’s almost brain dead. For the bulk of the missions I played, all I had to do was cover any path that the Genestealers could take to get to me with an overwatch command and the enemy AI wouldn’t dare cross it. They would all gather up in an orderly line and wait for me to drop the overwatch, which I never did. There is a patch in the works that supposedly fixes this issue but I had to judge the game based on what I was presented.

Outside of the campaign, there is also the ability to make your own levels which is a dream come true for fans of the board game. In addition to making your own, you can download other players levels as well as additional official ones. It’s a really nice addition that makes you feel like Cyanide wanted to honor the game and its fans. Multiplayer is a little shaky as the player base is kinda minimal right now but if you have a friend who owns it, the set up is pretty simple and makes for a nice battle. 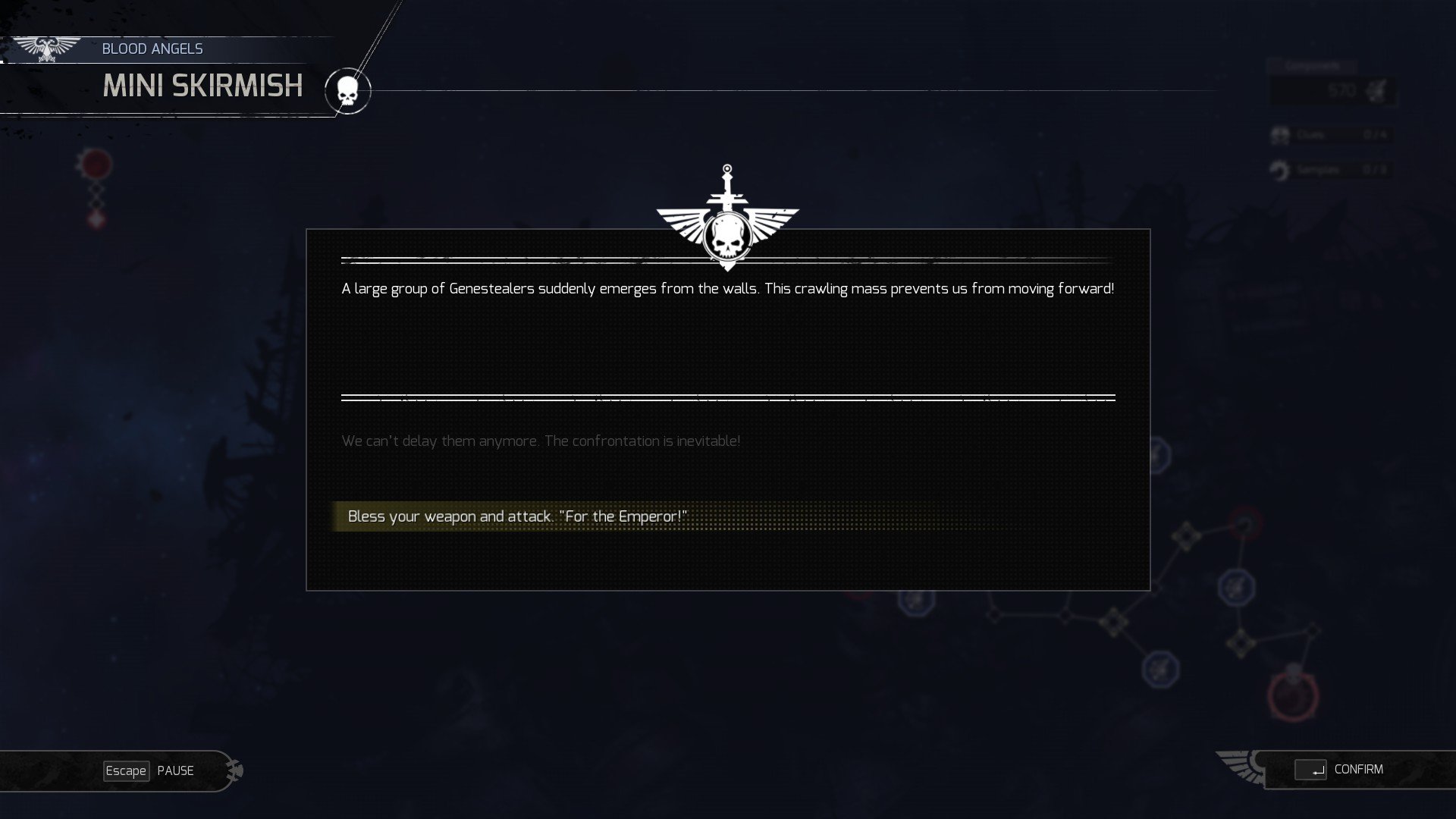 The only other thing that really bothered me and this is strictly a PC problem was that the keyboard controls did not seem to be optimized at all. When playing a card you couldn’t scroll around the map to choose the unit you wanted to play the card on and instead had to tab around until you got to the unit you wanted. When playing as a Genestealer it was easy to accidentally move characters as the previously mentioned lock feature required you to relinquish any further moves for a turn before you could select any other character to move. It was more of an annoyance than anything.

Ultimately I think fans of the 40K universe and Space Hulk will be satisfied, it just might need some time to iron out the AI bugs. If this is your first go at Space Hulk it is an excellent place to start but you have to be willing to learn to walk again as it takes no prisoners.