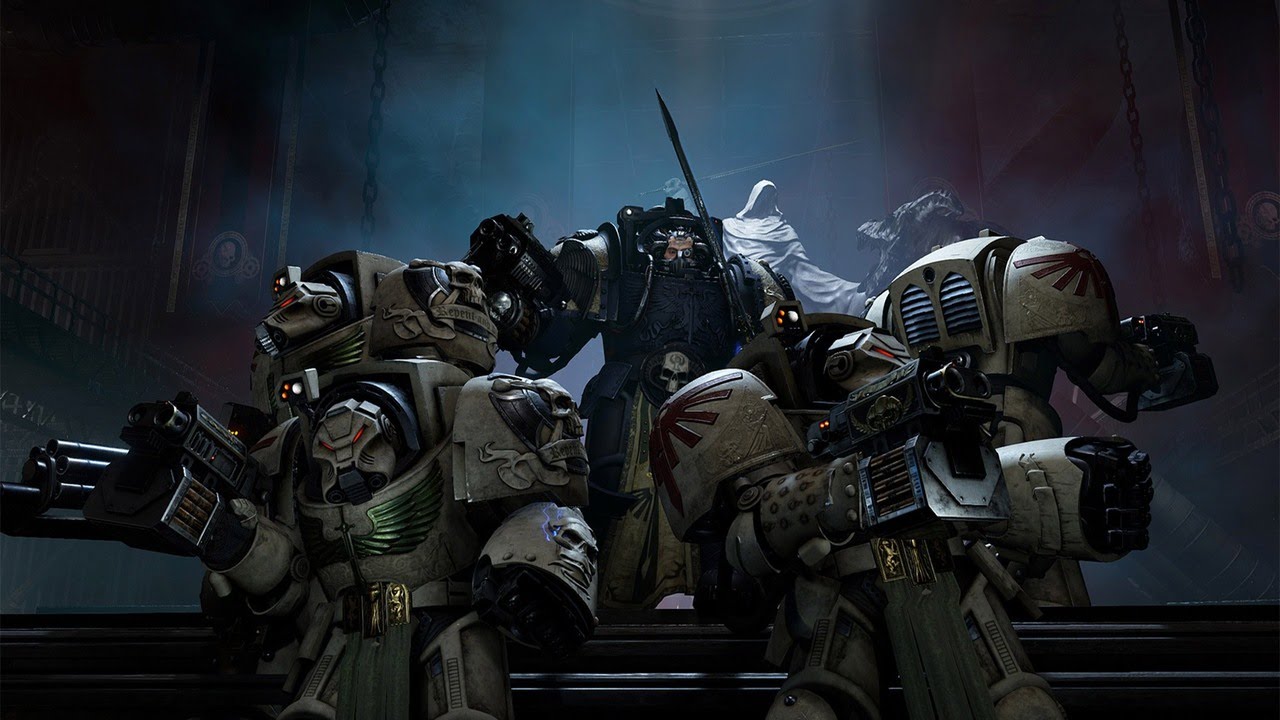 Despite being a big tabletop gamer, I don’t have any particular affinity for Warhammer 40K. Like most people, I found Space Marine to be an entertaining (if shallow) dalliance with the universe, but I never was able to shake the fact that I was playing as a murderous Buzz Lightyear, stomping Orks with my big silly spaceboots.

I do however have an affinity for the idea of suiting up with some friends and blasting some Tyranids — the 40K equivalent to Xenomorphs — in a Space Hulk, amalgamous collections of various ships and debris. Running through monolithic stone cathedrals embedded in the bowels of huge spaceships, lit only by the muzzle flashes of my Assault Cannon as I defend my fellow Space Marines? Sounds like a dream game.

Unfortunately, the dreams will remain just that for now, unless Streum On Studio does some major reworking on the sadly flawed Space Hulk: Deathwing. 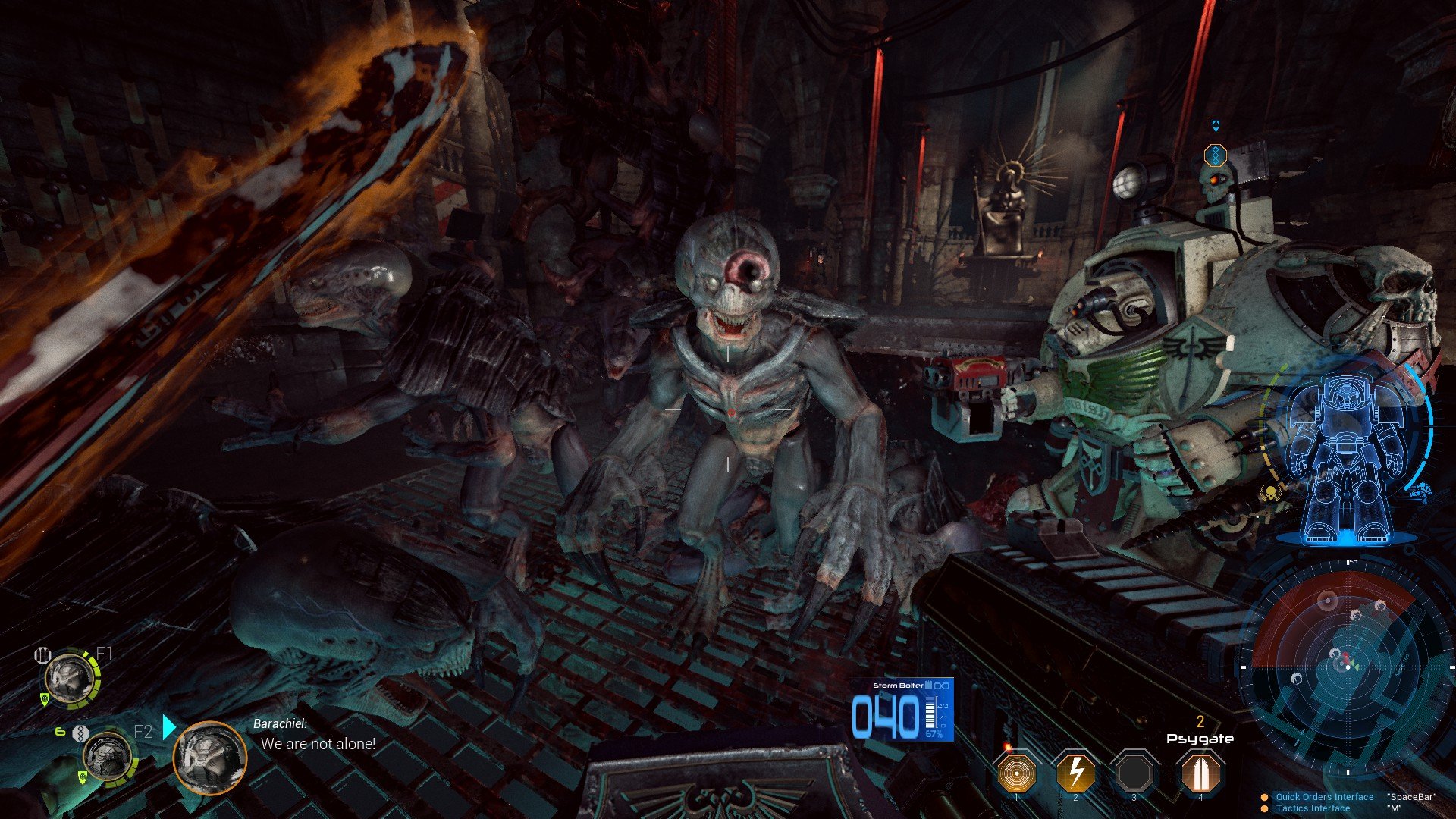 Warhammer 40K aficionados will appreciate the campaign more than the average Joe. It tasks you as a Librarian (the kind that has psychic abilities enabling them to tear their enemies apart, not the sexy kind) Space Marine from the Deathwing chapter with annihilating the Tyranids on a Space Hulk. When playing solo, you’re accompanied by two brain-dead AI companions that repeat the same lines ad nauseam, short cutscenes expand the story a bit between levels, and there’s a threadbare linear progression system that rewards you for finding relics and taking out more Xenos. Alternatively, you can play with up to three other friends, sacrificing the story sequences for a slightly more entertaining game.

Single-player is a drag. While relics offer a small carrot for you to chase in each level, giving you more to do than running to each objective, they don’t do anything other than providing small stat boosts and giving you more experience to spend at the end of the chapter. It’s disappointing finding what looks to be a legendary weapon only to find out it means almost nothing. Instead, you unlock weapons by completing levels, taking the fun out of exploring.

The majority of the game is spent finding dead end after dead end on too-large maps, killing everything you see on the way to your goal, and repeating that loop. That progression system I mentioned contains three separate lines of abilities that you can spend experience on, but two of the bars are almost entirely passive buffs so combat doesn’t feel notably different after earning them. The last bar is all psychic abilities, which gives you a more immediate effect to play with. 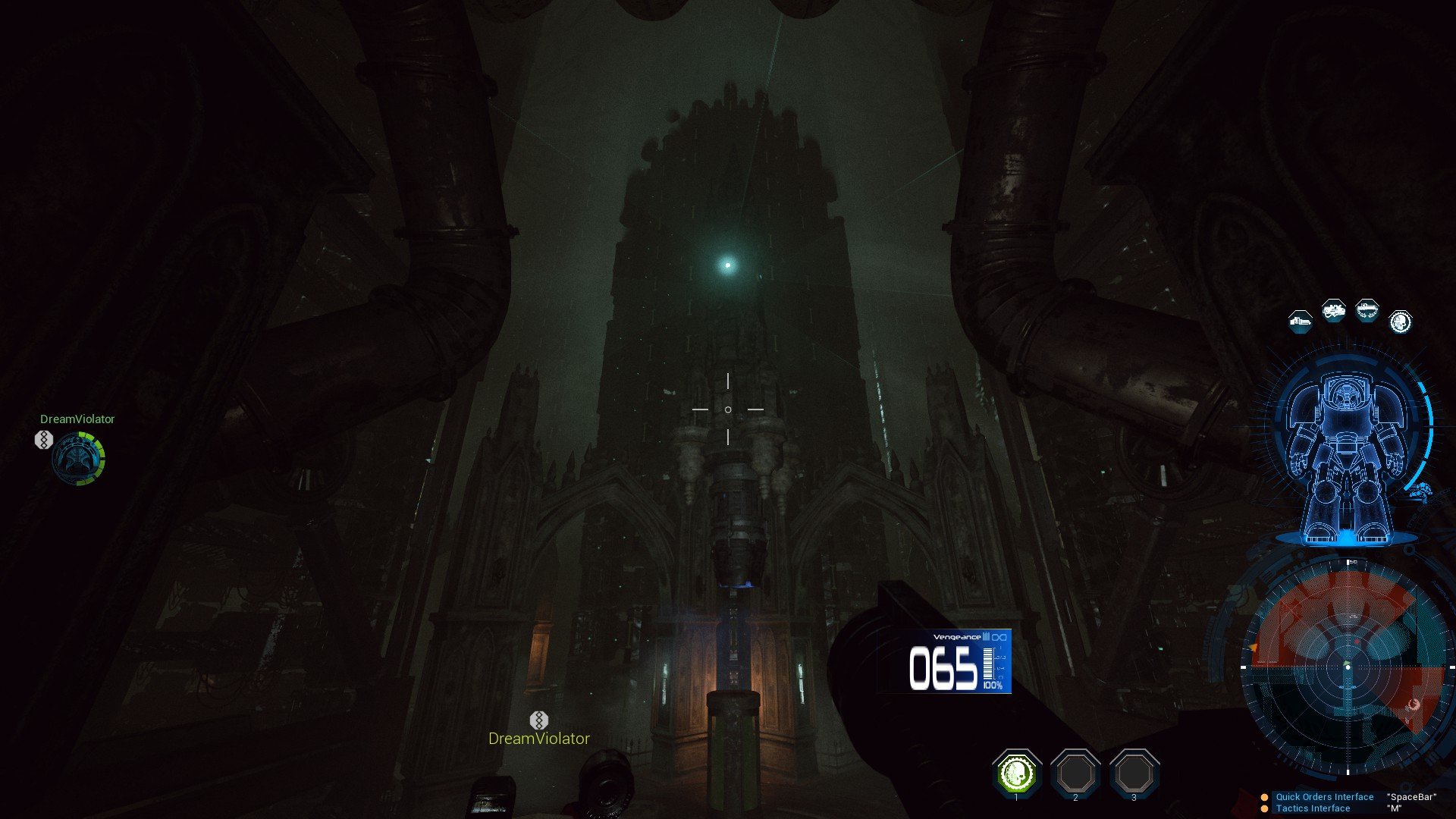 Multiplayer fares better in that you don’t have to deal with the AI teammates (who can only be directed through a small command wheel, and don’t particularly listen). Instead of only playing as the Librarian, you can choose different classes so that each player has a specialty, whether that’s melee weapons, healing, or psychic abilities. There’s another progression here, but a toggle called Codex Rules gives all players all of the weapons and abilities from the start, which I ended up preferring since it makes each class feel unique right away.

You may remember Streum On Studio from its work on E.Y.E.: Divine Cybermancy, a bizarre first-person-shooter-hacker that was full of interesting, sort-of broken ideas, and maps that were as big as they were empty. That lineage is continued with Space Hulk: whether playing by yourself or with three friends, the genuinely impressive environments don’t offer any incentive to explore them, and the few unique ideas feel half-baked. Each door can be hacked and sealed or destroyed, which implies a certain tactical methodology that the game doesn’t seem too interested in. Turrets can be hacked through your map, but this generally isn’t required or even all that helpful. A special locational damage system means that in theory, parts of your armor could be damaged leading to interesting malfunctions. Instead, you just die when you take enough damage in any one part.

I could deal with a boring progression system and lackluster maps if the combat was exceptional at all, but it’s a mixed affair in almost every way. 40K weapons like the Storm Bolter and Assault Cannon are present and accounted for, but lack any real punch. This is highly subjective, of course, but even though I was heavily stomping through rickety corridors, the relatively tame weapons never gave me that oh-so-necessary feeling of impact. Plasma weapons feel more effective later on, but still sound too weak for the flesh that you’re rending. Once in a while combat clicks and you blast an overhead pipe to light your foes ablaze, but these moments are too seldom. More environmental interaction would go a long way in helping spice up the ranged battles.

But sometimes you want rush headlong into the thickest frays, Thunderhammer in hand. Melee weapons provide a better heft and all around feel more useful than any of the guns. Most of the smaller enemies go down in one to two swipes, which is infinitely more satisfying. Blocking, parrying, and striking is all a little clunky, with a strange delay, but I had my best Space Hulk moments when I was cleaving Tyranids in twain. 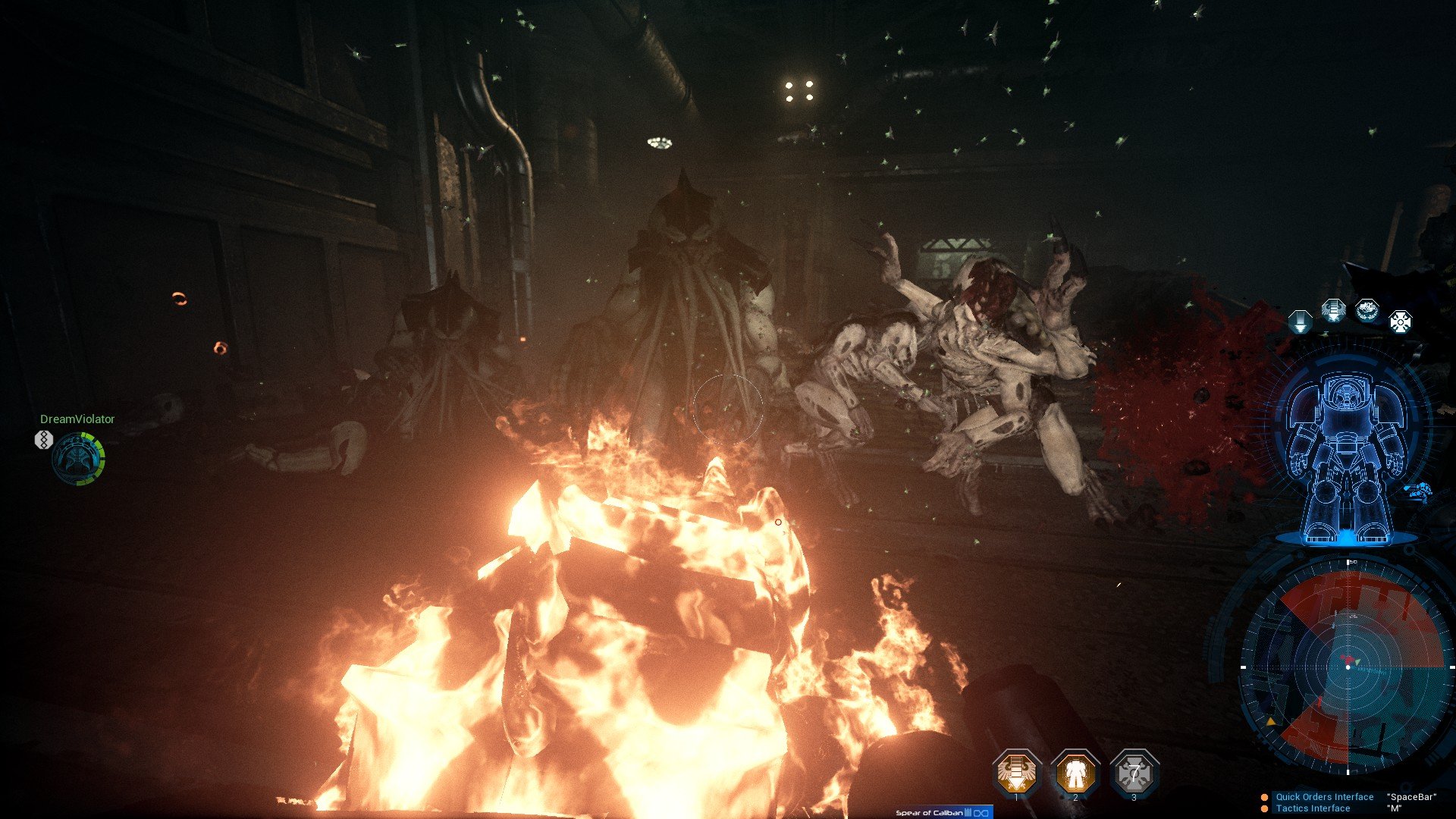 This all adds up to a mediocre experience that could be at the very least fun with some friends if they were willing to accept some monotony, but Space Hulk was clearly rushed and drowning in technical issues. At the time of completion (roughly a week or so ago, Christmas kept me busy), I had crashed to desktop four times in both single-player and multiplayer. Corpses do weird things when they ragdoll, sometimes glitching out entirely. As if crashing wasn’t enough, poor optimization led to me dropping from 60 to 20 frames per second almost every time a swarm came down on me, which was about every two minutes. I was using a GTX 1070 and i5-4690, and the frames would drop whether I was on the lowest or the highest settings.

Also of note is that although the game often looks incredible since they really nailed the high Gothic 40K setting — just look at that third screenshot — textures often appear muddy when close up. That the game can be so drenched in atmosphere due to Streum’s impressive adherence to the universe and also be marred by technical issues is frustrating, to say the least. A budget-looking UI is the crap cherry on top of the dirt sundae.

There’s already a large contingency of the Warhammer 40K defense force saying that people disliking the game just don’t “get it,” that this is the perfect video game adaptation of Space Hulk. Expect to see them in the comments, saying that I played it wrong. Maybe that’s true, and I’m just a big dumb idiot! Or more likely, this game was pushed out too soon. Streum is already working on fixes, including reducing multiplayer crashes. I hope that in the next few months, Space Hulk: Deathwing goes through some drastic changes and becomes a more engaging romp through grimdarkness. For now, I’d say get your bloody jollies elsewhere.