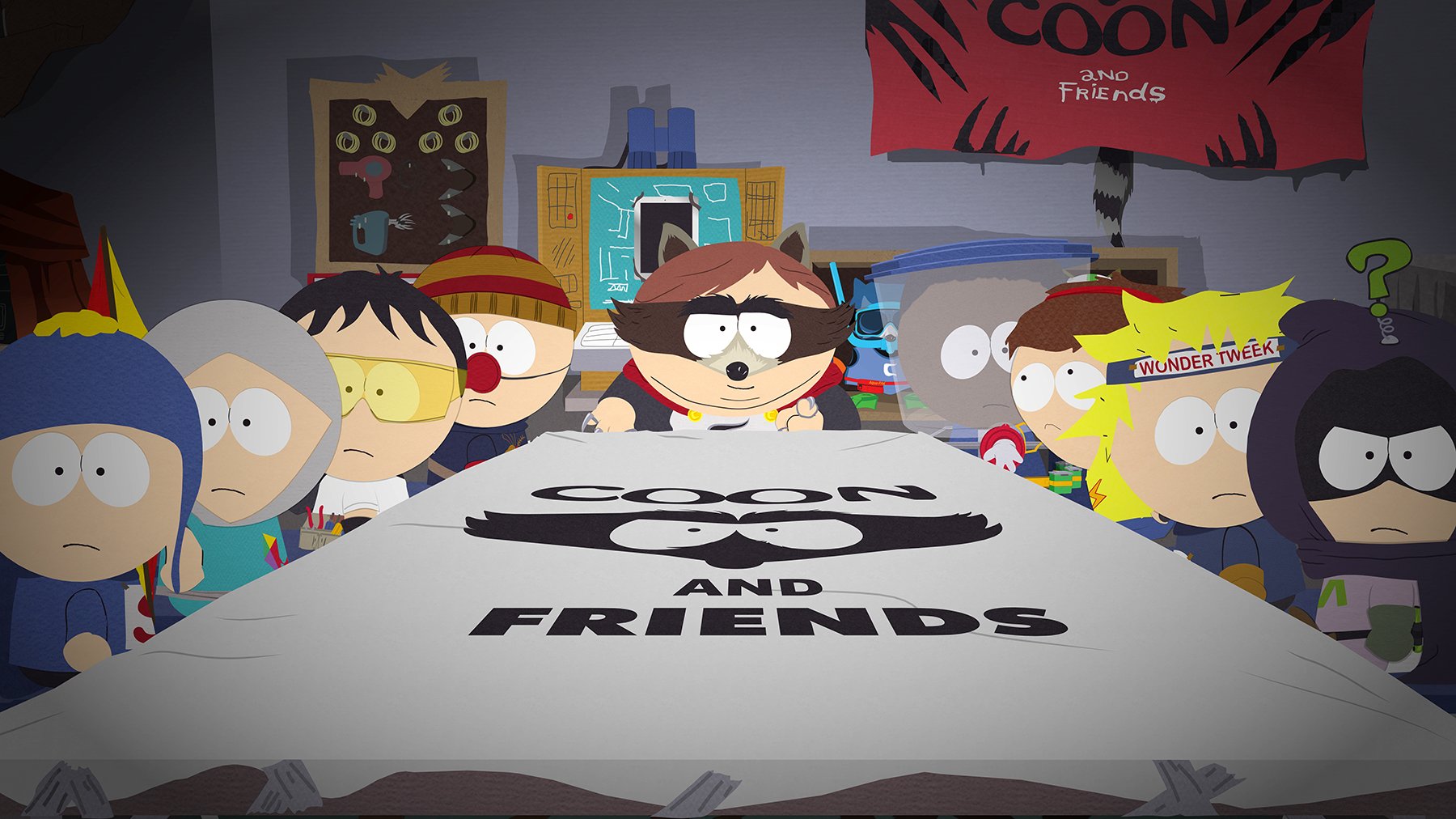 In one of this season’s episodes of South Park, Randy Marsh remarks “You have to overdo it in today’s society. You can’t be nuanced and subtle anymore or else critics go ‘Wow, what was the point of that?'” It’s a slice of meta-observation about what South Park has been fighting for 20 years now. The brash, outrageous, over-the-top, line-toeing comedy gets the attention; any quieter social commentary often goes overlooked.

South Park‘s newest video game, The Fractured but Whole, doesn’t take any chances on subtlety or nuance. It’s constantly absurd in every single respect. Sometimes it has a point to make, sometimes it’s just pointing without really saying anything. But it’s always attempting to one-up itself.

People who watch South Park know exactly what they’re getting into. 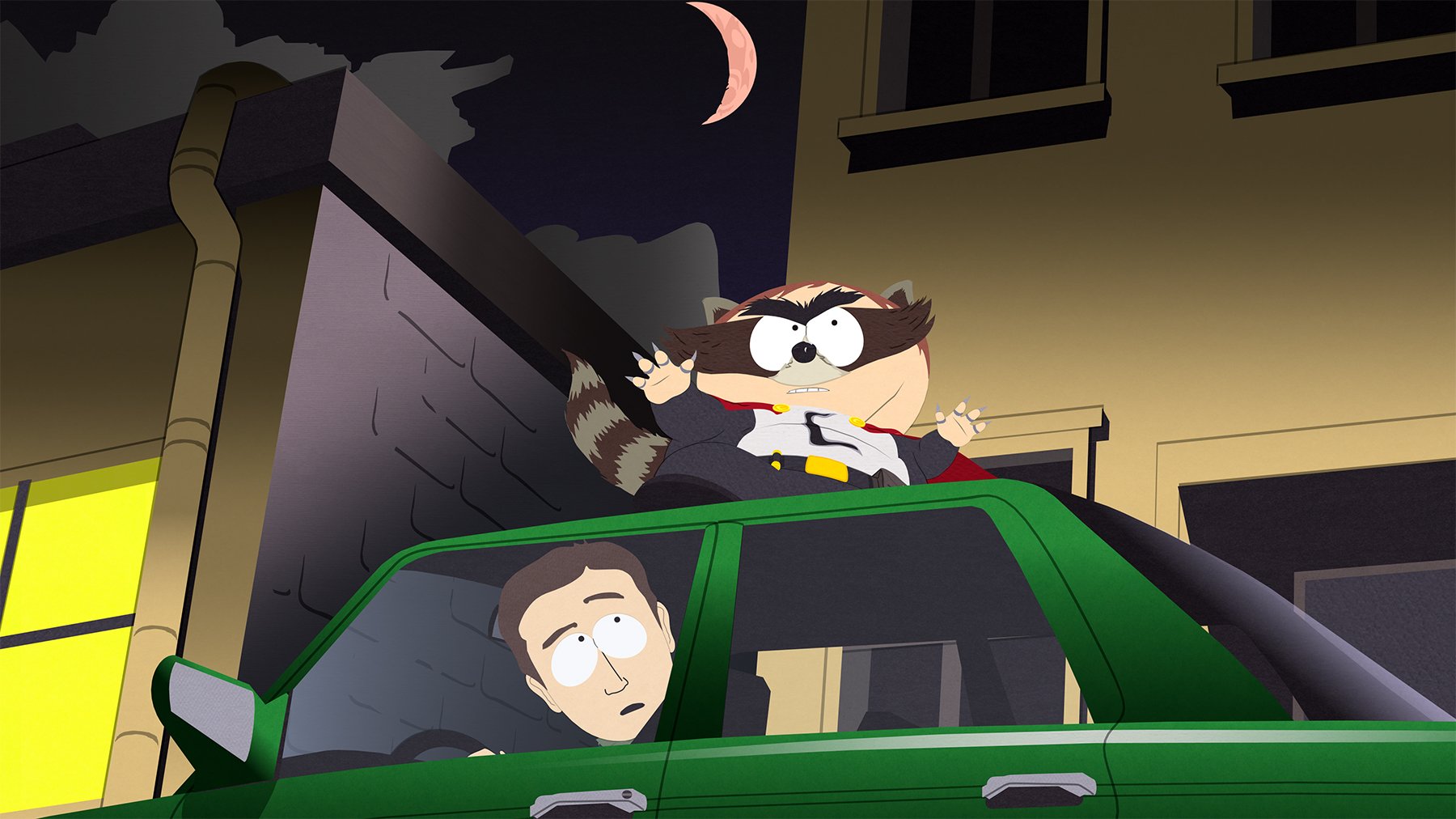 The boys are back. Soon after the events of The Stick of Truth, the gang ditches fantasy for superheroes. Their reasoning is that they can probably launch a multimedia superheroes franchise — think Netflix originals, multiple movies, video game tie-ins, etc. — and rake in the cash. Cartman has a whole three-phase plan.

That plan is divisive though, like nearly everything Cartman does. Half the crew disagrees and splinters off from Coon and Friends to form the Freedom Pals. Lines are drawn in the sand. It’s civil war.

Caught in the middle is The New Kid, the same silent protagonist from The Stick of Truth (although he’s called Butthole this time instead of Douchebag). He’s immediately given a tragic backstory where he saw his dad fuck his mom. From there, at Cartman’s behest, he sets off to find a missing cat so that Coon and Friends can secure the $100 reward. That’s the crucial jumping off point for this entire franchise-to-be.

South Park is mostly unchanged in the three years since The Stick of Truth. All the same landmarks are there — Stark’s Pond is still on the far west, Kenny’s house is still on the other side of the train tracks, and the rest of the boys’ homes are aligned in a tidy row along one street. However, as the show has changed, so has The Fractured but Whole‘s take on the town. New locations include SoDoSoPa, Shi Tpa Town, and an ominous under-construction mall in the background.

Although a lot of it is the same, it’s no less of a pleasure to re-explore these areas. Everything is bursting with little nods to the show, and that’s precisely what makes South Park such a fantastic candidate for a game. There are more than 20 seasons’ worth of material to pull from, and nearly 300 episodes of gags to reintroduce. Even when The Fractured but Whole isn’t actively riffing on something, it’s taking a page from the Member Berries and saying “Hey, remember this?” It works brilliantly.

While walking around, talking to everyone, taking selfies, and completing fetch quests feels adequate most of the time, it’s The Fractured but Whole‘s attention to combat that really elevates it over The Stick of Truth. This is more of a strategy turn-based RPG, where characters move across a grid to take new positions. Spatial considerations do wonders to vary a fighting system that did the bare minimum in its predecessor. 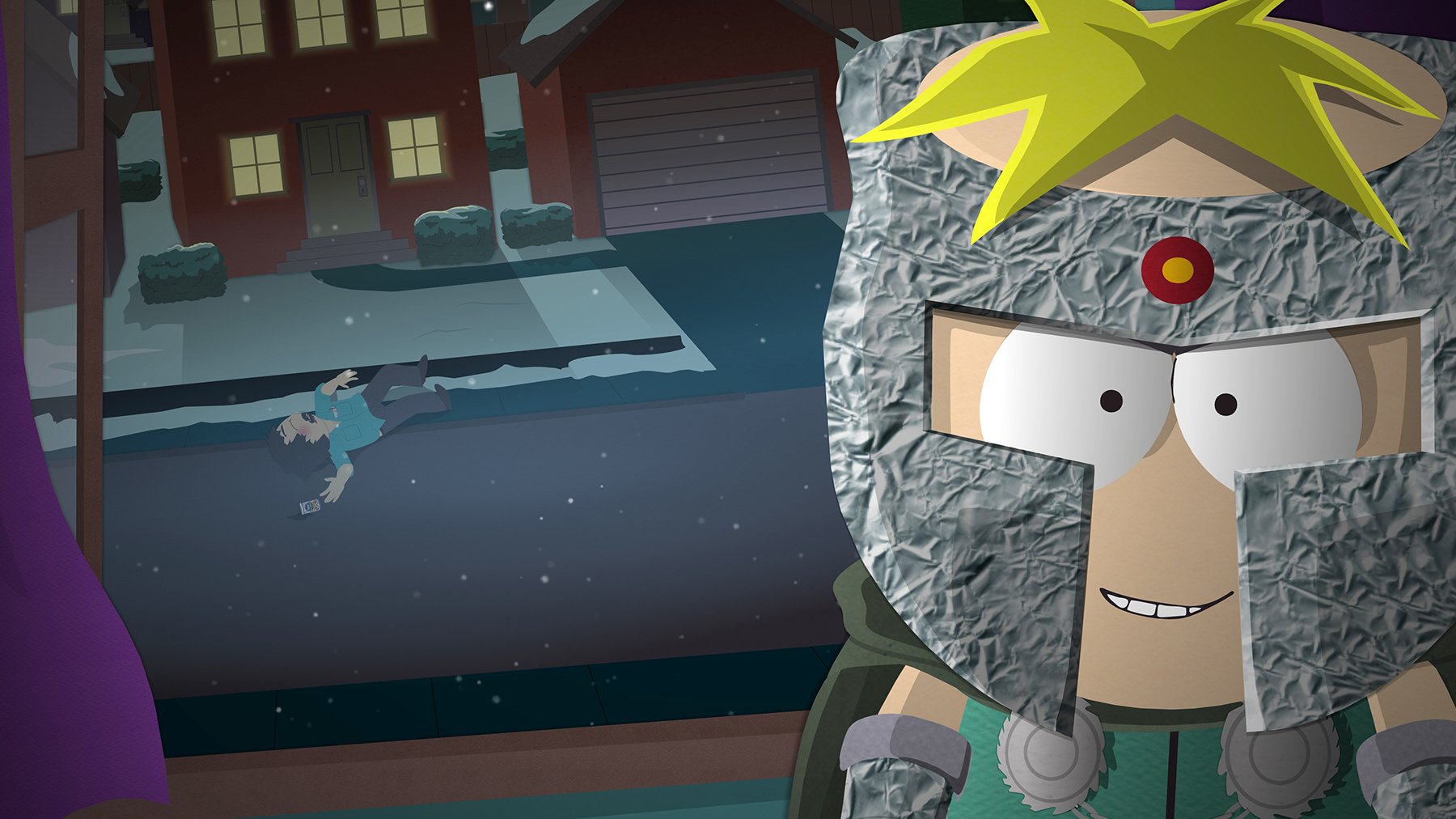 There’s also a lot more going on with the superhero teammates. There are a dozen-or-so potential partners, and each of them has a unique set of moves that isn’t too similar to anyone else. They mostly fall into RPG archetypes (the Human Kite is a healer, Coon is a melee fighter, and so on), but they’re different enough to warrant consideration as to what’s the ideal makeup for any particular fight.

In its most memorable moments, The Fractured but Whole‘s combat forces an awareness of positioning. One major fight requires funneling all the enemies to one side of the battlefield. Others emphasize moving as quickly through a room as possible, with little focus on actually engaging anyone. These are little subversions that act as welcome detours from just fighting until everyone’s dead.

In true South Park fashion, butt stuff is a staple of The Fractured but Whole. Farting is used to glitch time and alter the flow of combat. Every toilet in town can be mastered through a pooping mini-game. Most puzzles are solved through acquired buddy powers, each of which has a different environmental use for farting. No one claims to be here for the high-brow humor. 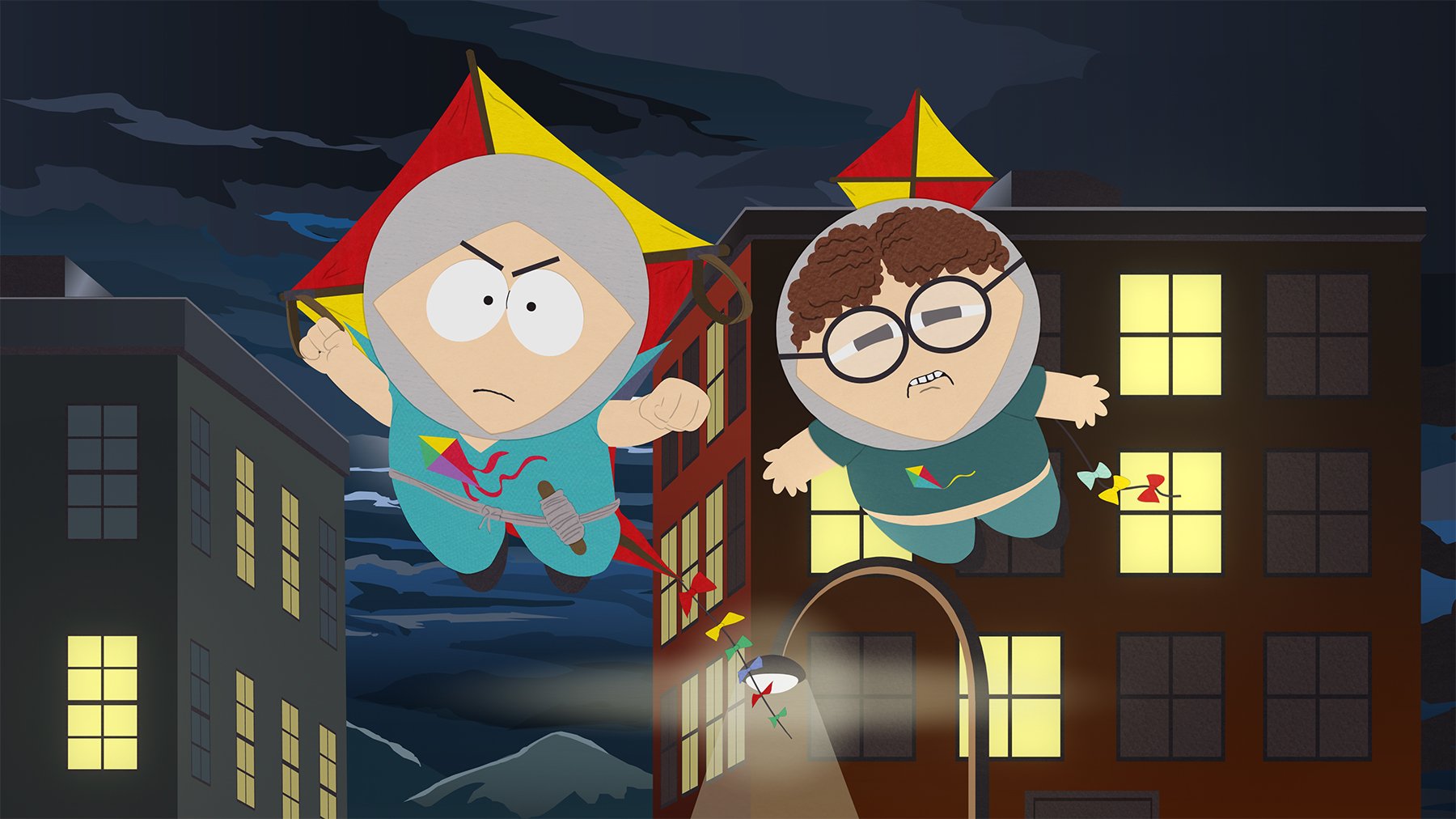 The Fractured but Whole is remarkably open in the way it trades in customization. It allows us to alter ourselves freely and endlessly. The New Kid’s appearance, costumes, superpowers, gender, sexuality, race, and ethnicity can be changed at any time. The latter half of that list is turned into bits, some of the more notable examples of situations where the writers don’t really have anything to say.

Instead, it feels like they’re just acknowledging that these are things that exist in society. Mr. Mackey’s awkward fumbling at the mention of gender fluidity doesn’t serve as any sort of real satire. Maybe it mirrors how some people still struggle with being unsure about the correct words to describe these concepts of self-identity.

Or, maybe it’s just there because everything is kind of there. There isn’t much that’s relevant today that escapes some sort of comment from The Fractured but Whole. Racial injustice, police corruption, Trump’s rise to power, gentrification, immigration, (surprisingly dark) themes of emotional domestic abuse, social media obsession — it’s just some of what this game touches on. Some of it is poignant, some of it is just there. 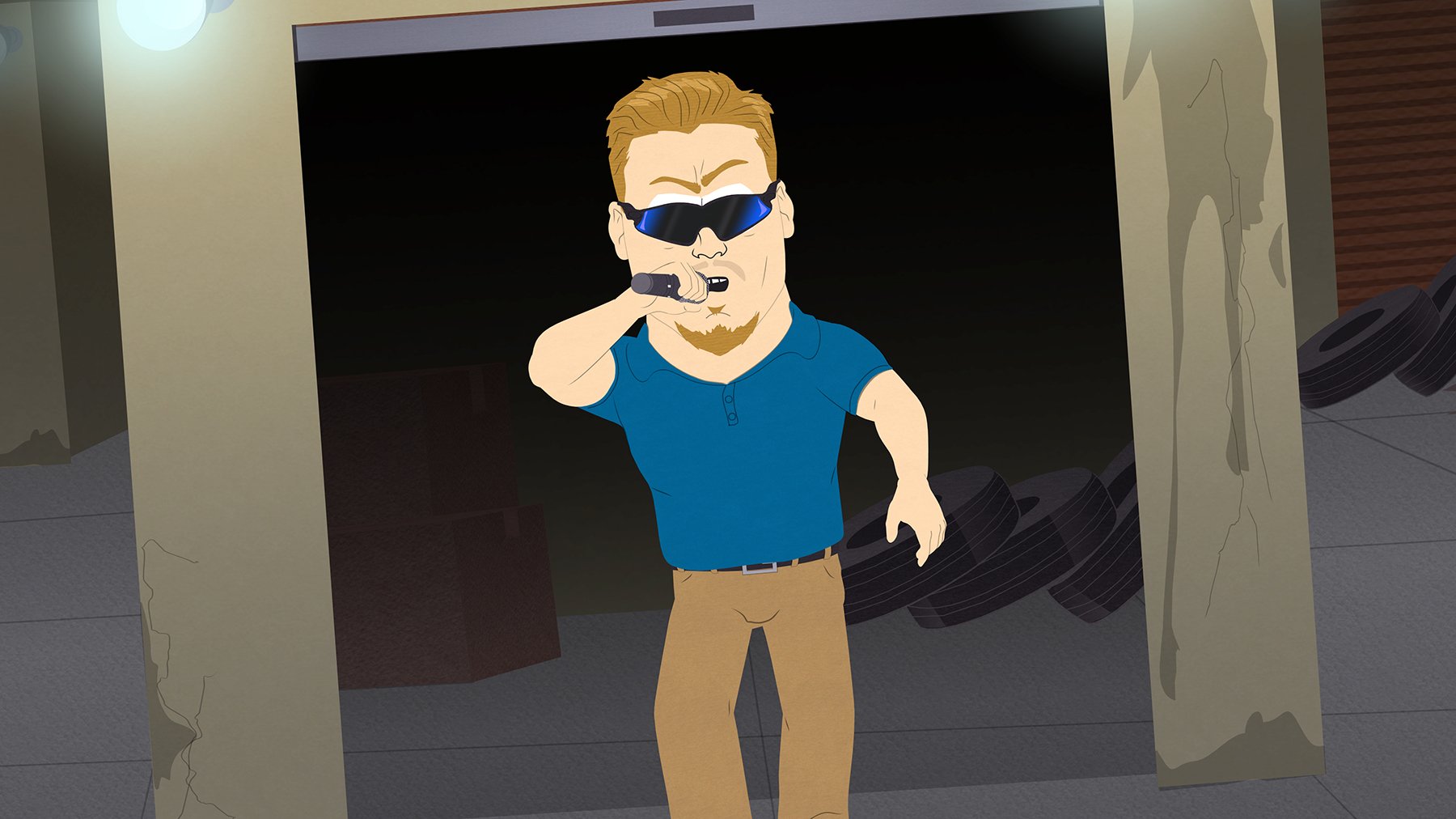 South Park is partially responsible for raising a subset of a generation of kids that can laugh at anything and that takes no subject too seriously. (Chances are you already know exactly how you feel about the previous sentence.) The Fractured but Whole steps right in line with this mindset. It’s all on the table. It’s usually funny but sometimes it falls flat, just like the last 20 years of the show. It’s not afraid to try, though.

Despite its sometimes uneven writing, The Fractured but Whole is worthy of the highest compliment a game like this could get: It feels like a long, quality episode of South Park. It’s an improvement over The Stick of Truth in terms of combat mechanics, ridiculous plot escalation, and amount of content. It’s really all that a South Park lover could ask for.

The guy selling tickets at the movie theater flippantly asks every time you see him “Aren’t superheroes kinda played out?” As it turns out, not quite yet. Not as far as South Park is concerned, at least.