Sonic the Hedgehog 4: Episode 1 was considered a letdown by many longtime fans of the series, mostly due to the fact that its physics were not similar enough to the original Genesis titles. Part of the benefit of an episodic series is that developers can listen to concerns such as this and address them in future updates, something quite clearly evidenced in Episode 2.

This time around, Sonic moves through stages with a sense of weight and momentum far more reminiscent of his earlier platforming adventures, which many will consider a boon. Unfortunately, however, it seems that Sonic Team and Dimps was so focused on fixing that one problem that it forgot to make sure everything else was up to snuff. 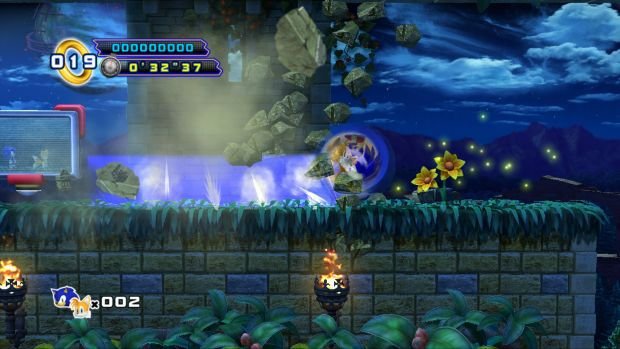 As with Episode 1, this new chapter is split into four stages comprised of three main acts and a boss battle. Since Episode 1 took most of its inspiration from the very first Sonic the Hedgehog game, it is fitting that Episode 2 should draw heavily from Sonic the Hedgehog 2, with stages based on the Aquatic Ruin, Oil Ocean and Wing Fortress Zones, not to mention Metal Sonic as a recurring rival (and playable character for those with Episode 1 game data). More importantly, Miles “Tails” Prower has made his grand return, and his appearance proves quite crucial.

Tails can be controlled by another player either locally or via Xbox Live, or he can act as an independent CPU character. In a nod to his Genesis debut, Tails may aid Sonic by grabbing his hands and propelling him through the air like a small orange helicopter, but interaction between the two is far more extensive than once it was. As well as flying, the furry pair can combine to form one giant ball that smashes through barriers and destroys larger opponents in a heartbeat — at the cost of limited control and an inability to change directions. Both flying and combo rolls are integral to getting past certain obstacles, and are initiated or cancelled at any time with a simple contextual button press. 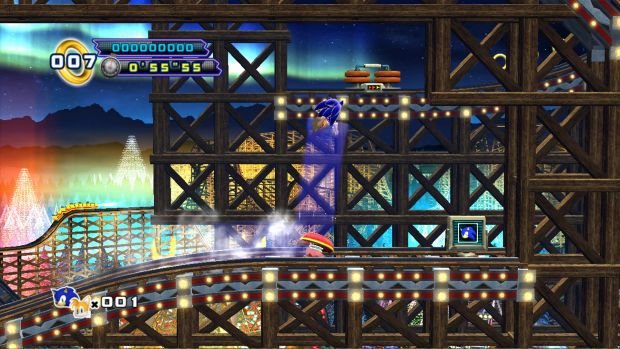 Along with the weightier physics is an overall slower progression through levels. Though there are obviously moments of speed, Episode 2 comes closer to capturing the feel of the Genesis platformers than any other title to date. Sonic takes more time to reach top speed and slow down, and there are no more instances of him defying gravity while clinging to ceilings. Those players hung up on physics ought to be more than satiated by the way Sonic feels as he sprints across the landscape, but there’s a price to pay for such nostalgic commodities. Sadly, the slower pace has not brought with it the superior level design of past titles, and this makes for a game that is, on the whole, relatively dull and quite forgettable indeed.

There are certainly moments that bring a little exhilaration to the table. One stage in particular, set on a roller coaster with constantly shifting tracks, is intricately designed and satisfyingly tricky to navigate. These moments are few and far between, however, with an alarming amount of sluggish underwater levels and repetitive, uninspired platforming gimmicks from yesteryear making up the majority of the challenge. From slippery platforms to weary “I’m being chased by a wall that will crush me” sequences, the majority of the action in Episode 2 feels too old fashioned and predictable to really offset Sonic’s more methodical movements.

The boss battles are similarly unremarkable, most of them dragging on for far too long and attempting sudden ambush attacks to falsify a sense of danger and difficulty. Outside of one nice little fight that has Sonic avoiding a series of falling crates and using them to reach Eggman, à la The Blocks Cometh, there’s really nothing I’d consider playing more than once; a feeling that permeates the entire experience. I could still happily go back to Episode 1 and play several levels again, but I have absolutely no desire to return to Episode 2 anytime soon. 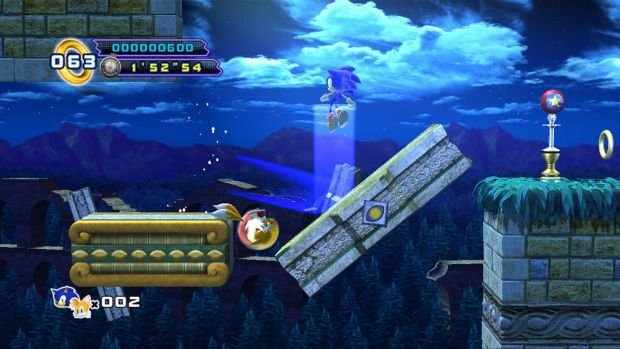 The game isn’t particularly bad, it’s just not engaging on any level. It’s solid, providing the occasional pleasant moment and dose of eye candy, but it’s one of the more banal offerings of late, which is a real shame considering what a high point Sonic Generations was. With Episode 2, it seems Sonic Team addressed the main complaint from Sonic 4‘s first installment, and simply went through the motions when it came to making the rest of the game. A fairly inoffensive set of levels, to be fair, but no real heart to any of them.

That said, the new interactions between Sonic and Tails add a fresh element to the standard platforming, and it can be quite fun bowling through a level as a giant sphere of death. The new bonus stages, based on the popular half-tube rush levels from Sonic 2, are a welcome sight and provide a few thrills that are missing from the rest of the adventure. Being able to play co-op may add an extra level of replayability for some, but I can’t see too many platforming fans returning to this one time and time again. 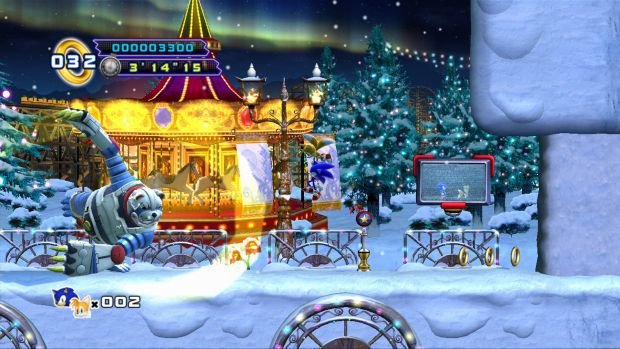 The true disappointment of Episode 2, however, is found not so much in the gameplay as in the soundtrack. The Sonic series has always had excellent music, which makes me wonder exactly who thought the obnoxious cacophony assaulting one’s ears in this game was a good idea. Each “tune” is a mess of high-pitched techno squawking that takes a few seconds of attempted melody and repeats it to nauseating degrees. Not only is each bit of music repetitive, it’s also quite short, looping over and over again during the course of any given Act.

The boss battle music is particularly distressing, consisting mostly of the same nine notes mercilessly churning out of the speakers like incorporeal circular saws headed straight for the brain. It got so bad that, at one point, I actually had to mute the music. I’ve never had to do that for any game, let alone part of a series that I usually praise for fantastic audio. I had to do it for Episode 2, however, because it was physically and mentally unbearable. 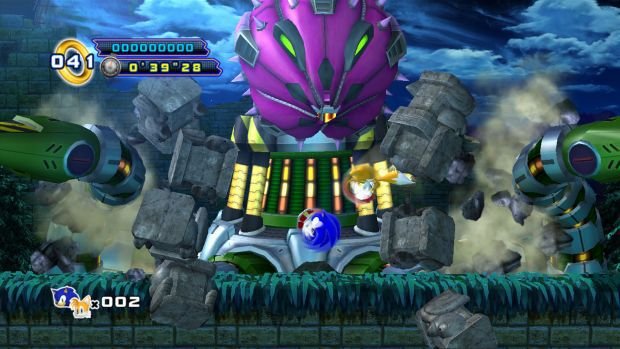 As one of the few people who genuinely enjoyed Episode 1, I was looking forward to seeing if Sonic Team could keep up the momentum and knock it out of the park with a followup. Disappointingly, while it appears the studio really did try to get it right, and made some noble attempts to fix whatever may have been wrong in the past, the resulting game is unspectacular and, to be honest, fairly boring. Coupled with one of the most despicable soundtracks I have ever had forced into my ears, Sonic the Hedgehog 4: Episode 2 is very difficult to recommend. It’s not terrible, not by a long shot, but it barely seems worth the time — and auditory agony — to play.

A solid applause for the effort, but it would be a real shame if Sonic 4 ended on this note, because I want Sonic Team to try once more with feeling.