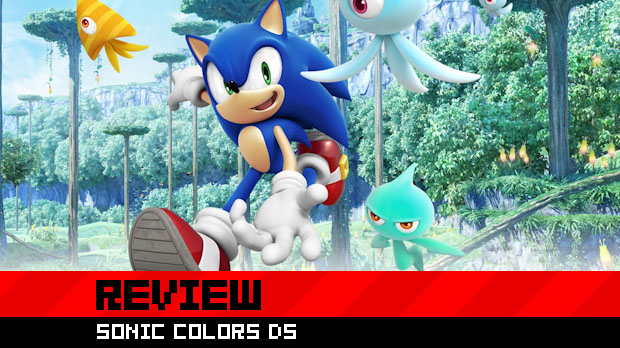 While Sonic the Hedgehog has become quite famous for a string of terrible games over the past ten years, that’s only really true in terms of home console output. Hyperbole states that we haven’t had a good Sonic game since Sonic Adventure, which really betrays how much we gamers ignore the handheld market.

With many thanks to developer Dimps, Sonic’s portable games have often been decent. Sonic Advance and the Sonic Rush games have often ranged from decent to superb, which makes one wonder why Dimps is the “B” team and the inferior Sonic Team is the “A” team.

Sonic Colors in the DS does little to answer that burning question, but it damn well ensures that it gets asked once again. 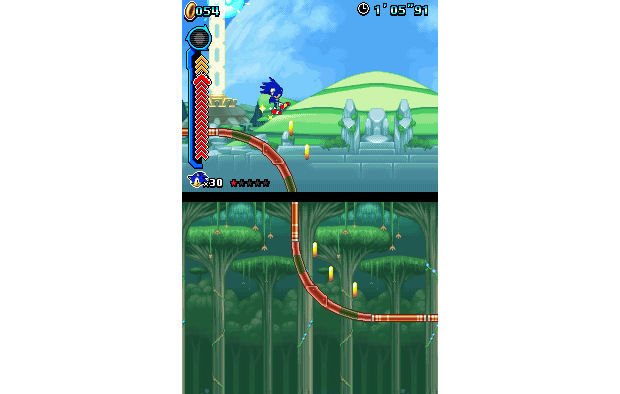 Sonic Colors on the DS shares the same basic premise and gimmickry of its Wii counterpart, but that’s where the similarity ends. Sonic Colors is a straight 2D platformer, bearing far more resemblance to Sonic Rush than anything to be found in Sonic Team’s latest console offering, with some notable improvements to the Rush formula, to boot.

The “press right to win” dynamic of Rush has been toned down, with a slightly slower Sonic and levels designed to put the focus on exploration as opposed to simply running. In fact, the levels have nearly all been put together rather excellently, especially the implementation of the Wisps. These Wisps are cute, marketable little aliens that Eggman has trapped in an intergalactic theme park, and they give Sonic various special powers when captured.

Sonic Colors can be completed without having to make use of most of the Wisps, but the game is a lot more fun, and you can score a lot more points (needed, because the game’s post-level grading system is damn strict!), if you use them. An added incentive is that using them can be quite fun, too. The levels built around the Yellow Wisp’s drill power are especially cool, and many of the gimmicks and routes in each stage treat the Wisps as a far more integrated part of the game, unlike the Wii version where they appear tossed in as a throwaway gimmick. 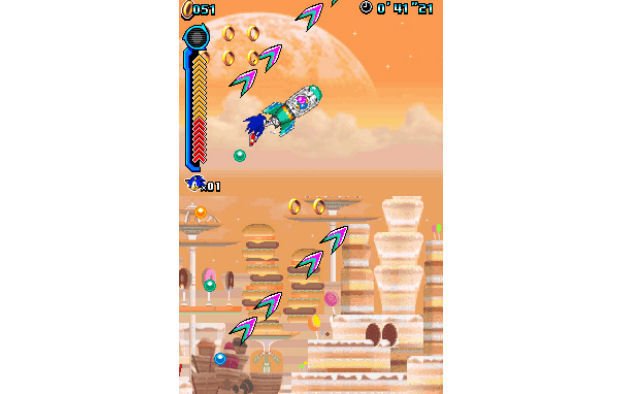 Dimps has also done a remarkable job of curbing the frustration that usually accompanies recent Sonic games, the ones that operate at such a speed that the only “challenge” in the game comes from trial-and-error pitfall deaths. While Colors can be a rather tough DS game, and there are some cartridge-snapping moments, most of the challenge comes from tricky platforming and making use of all Sonic’s abilities at the right time, not from lacking the clairvoyance to know when the next split-second jump is about to ambush you.

A few of Sonic’s console abilities are ported over to this game, with mixed results. The homing attack returns, but it’s one of the most successful iterations of the ability yet. Homing attacks always hit their mark, and there’s no lag or risk of causing an accidental death by daring the follow the game’s directions. The power to jump from wall to wall is also quite satisfying, albeit a little sluggish, but pressing the R button to slide through narrow gaps could have done with being scrapped. It barely works properly and it seems gaps have always been placed during speedier sections, which only serve to break the flow of the game.

Colors DS also sports its own variation of bosses, which also vary in degrees of quality. They’re all damn challenging, and many of them are quite clever. Just a few feel as if Dimps tried too hard, with a couple of fights that expect you to die several times before you know what the Hell is going on. Fans of bosses that don’t take it lying down ought to be satisfied. 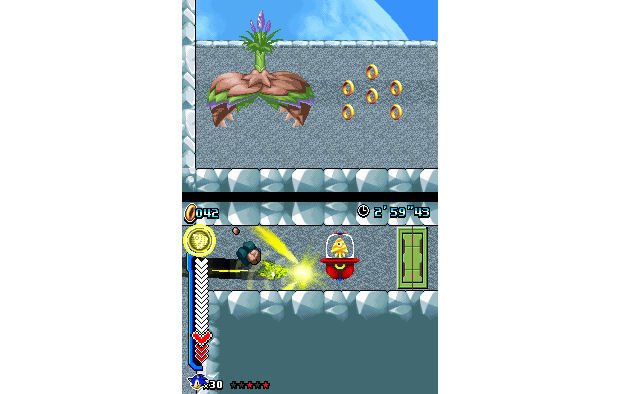 The main levels of Sonic Colors are pretty great, but the game’s various sub-missions are dreadful. Not only do they feature cameo appearances from terrible characters like Silver the Hedgehog and Cream the Rabbit, most of the missions are fairly inane (capture thirty Wisps within an absurdly strict time limit) and are merely rehashes of previous stages. Fortunately, these can be ignored for the duration of the game.

The game’s Special Stages, however, are well worth checking out. Making use of the touch screen, these levels hark back to Sonic 2‘s classic bonus stages, as you drag Sonic around a tubular track in order to collect colored orbs. It’s fairly easy, but that doesn’t stop it being fun, and it also features some fantastic background music. I found myself selecting these stages just for how they look and sound more than their gameplay.

If that’s not enough, there are also Time Attack levels and even multiplayer stages in which two players can link up and race. While these extras aren’t a huge selling point, they’re a neat, inoffensive feature for those who really get into the game and want a little more. 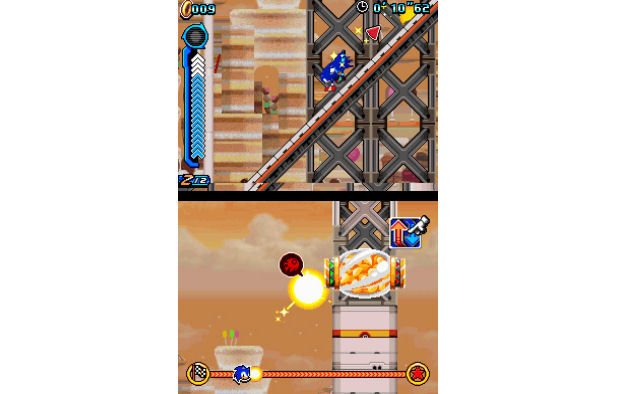 While it could have done with scrapping its pointless narrative and extras entirely, and there are a few later stages that could have done with tightening up, Sonic Colors is yet another great handheld Sonic experience. By taking many of Sonic Rush’s style but making various strong improvements, it’s easy to argue that Colors DS, not Colors Wii or even Sonic the Hedgehog 4, is the real return to form for our spiky blue friend. Its presentation is superb, most of the stages are structure incredibly well, and there’s enough replay value to be found, as you can go back to previous stages with unlocked Wisps to open new paths. Even without the gimmick, however, many of the stages are just worth playing again for the fun of it.