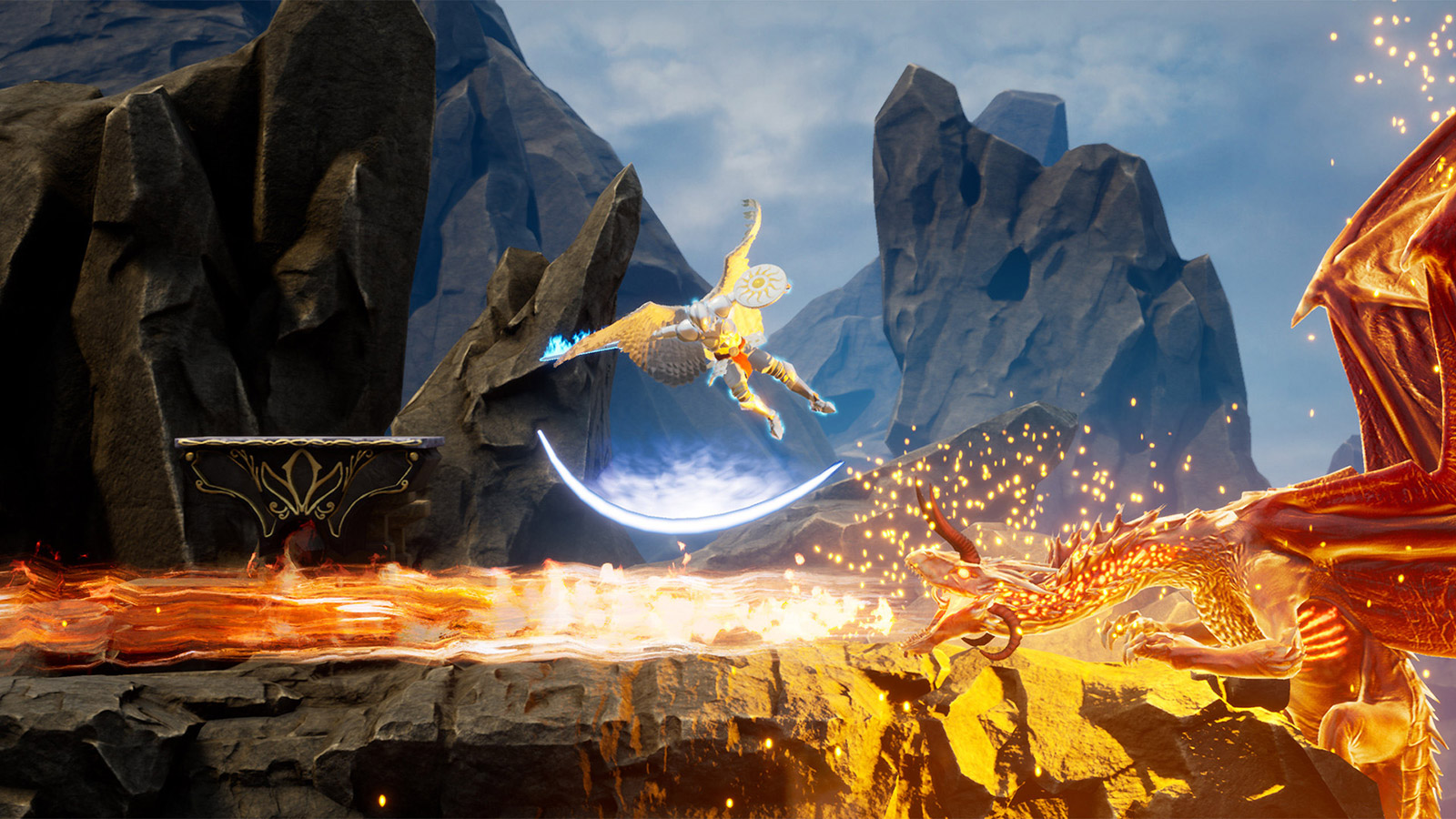 A modern-day interpretation of ActRaiser feels like a gift straight from the heavens.

The fondly remembered Super Nintendo classic was a novel concept back in the day, and all these years later, it still stands out. ActRaiser offered an intriguing blend of town-building god game and side-scrolling action-platformer, two very different styles that ended up complementing each other well.

SolSeraph isn’t a direct sequel to the SNES classic, but it’s clear where the game’s heart lies. Ace Team, the studio behind Zeno Clash and Rock of Ages, has another flawed but memorable game on its hands.

Humanity has a monster problem, but it’s nothing a little divine intervention can’t fix.

Playing as Helios, a sword-and-shield-wielding winged warrior, you’ll help tribes in five different regions of the world fend off creatures from the ground and the sky. You’re afforded a lot of freedom in not only which regions you want to approach first, but how you want to tackle the levels within them.

The strategy sequences play out far more like a tower defense game than they did in ActRaiser, but the platforming sits right in that same old-school wheelhouse. As you progress through SolSeraph, you’ll gain extra HP, mana, and abilities – like healing and projectile icicles – that’ll make life easier.

In the strategy mode, you’ll need to keep an eye on incoming creatures as they pop out of lairs to target your town center. Once the waves start, they don’t stop, but you can always pause the action to assess the situation. The basic loop involves flying around the map to collect mana from clouds and plopping down farms (to generate food), houses (to increase the population), and an assortment of defensive structures (to keep the beasts at bay). All of these key buildings require wood, which your people can gather from finite forests scattered about, and you can also lay down free roads to expand their territory. Thankfully, there’s a refund for demolishing, so you’ll never truly run out of resources.

Some of your abilities, like rain, are geared toward expanding the town’s reach; others, like lightning strikes, let you quickly zap foes out of existence. You need to employ a combination to succeed.

The steady flow of monsters means you’re pretty much always doing something. There’s little if any downtime. Early on, I found SolSeraph to be frantic, but once I figured out a winning formula (plan ahead and hit lairs back to back in one go), I steamrolled every single tower-defense section. There’s not as much puzzle-solving or creative thinking as I would’ve liked. Aside from a few minor biome-based twists, each region can be cleared essentially the same way. It’s all very straightforward.

The end goal: building temples within range of the shadowy monster lairs, thereby exposing them and allowing Helios to take the fight onto the ground. Each lair is its own side-scrolling platformer level, and the more of them you open up on the map, the more stuff you’ll have to defend against in the strategy mode. Deal with every last lair, and you can finally face the region’s big bad. The bosses are a highlight.

Whereas the strategy side of SolSeraph isn’t too demanding once you get a feel for it, the platforming levels can be brutal. Many of them are marathons, not sprints. It’s a matter of taking your sweet time, keeping an eye out for foes that can attack from any direction (including the foreground and background!), and playing consistently. The difficulty was a wake-up call at first, to be sure. That said, the further you go, the more mistakes you can make thanks to permanent health upgrades.

Combat is super simple, but feels good. You can use a bow to pick off pesky targets while meatier monsters can be dealt with using a satisfying three-strike combo. You also have an all-powerful shield and the ability to backstep out of danger. It’s nothing we haven’t seen before, but it gets the job done.

SolSeraph continues like that until the end, at which point you’re up against a boss gauntlet in classic ActRaiser style. On the one hand, SolSeraph is simpler than anticipated – there isn’t really direct interaction with the tribes outside of hearing their thoughts – and it doesn’t meaningfully push this sub-genre forward. But on the other hand, I had a fun enough time, and the price is right. It’s worth stressing that I cleared the game in a single five-hour-ish sitting. I didn’t mean to at all – time flew by!

I appreciate Ace Team’s attempt here, I really do. It’s kind of amazing that this game exists in 2019 under Sega. It’s not as original as the team’s past projects, but SolSeraph has a lot to like if you’re looking for a modern take on an absolute gem of the 16-bit era. Part of me wonders how outlandish these creators could’ve gotten with a bigger budget and scope, but as a tribute, this still hits the spot.

Even if SolSeraph fails to raise the bar, I’m so happy someone took another crack at ActRaiser.