SOCOM: Confrontation caused quite a stir due to its mixed reviews. Many praised the potential it had, but lamented its notorious network problems and glitches. Now that series creator Zipper Interactive is back in the driving seat, SOCOM has a chance at some crucial redemption.

So … what’s the excuse for the exact same issues plaguing this one? 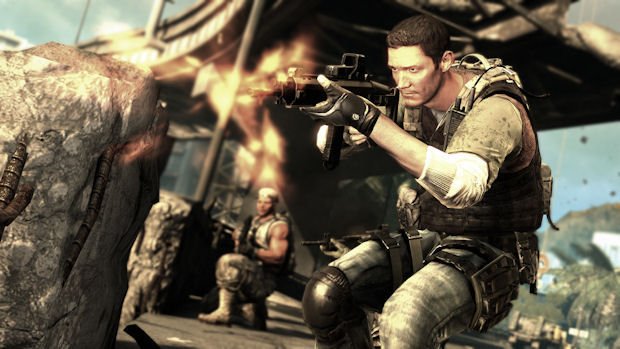 The first thing you’ll notice about SOCOM 4: US Navy SEALs is that it’s fond of a loading screen. In fact, when you boot the game up, you’re treated to the obligatory PlayStation Move warning screens, then a glorified desktop wallpaper that sits silently on the screen for just long enough to be too long, followed by a saving icon, followed by a second screen telling you what the saving icon means.

Once you’ve sat through all this and canceled all the corporate splash screens, you’re finally able to choose from a menu and enjoy the game’s three distinct modes — the single-player campaign, co-op missions, and competitive multiplayer.

You’d be best served by avoiding the narrative campaign altogether. Even calling it that is disingenuous, as the “narrative” barely exists and seems cobbled together from every generic, trope-laden military game you’ve ever played. There are no characters — simply unhappy men with guns that snarl at everything. The protagonists and antagonists might as well be the same people, and there’s simply no attempt to engage or include the player on any level.

Simply put, there’s no reason to care about these static, one-dimensional homunculi other than the fact that their preservation is required to beat the game … and that’s not much motivation at all. 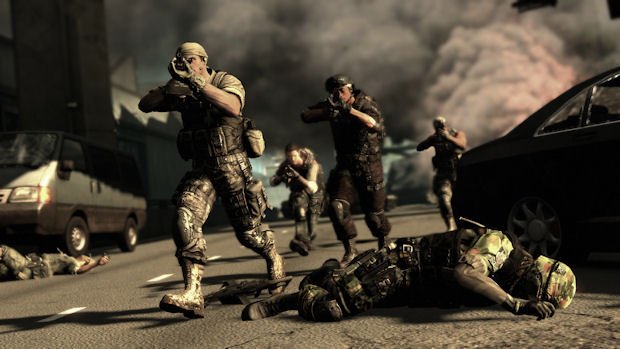 As far as the gameplay goes, SOCOM provides a fairly bog-standard third-person squad shooter experience. It does absolutely nothing to differentiate itself from the brood of shooters already on the market and in many ways it’s notably inferior. For one thing, interacting with anything requires your target reticule to point at specific, arbitrary areas on whatever object you’re attempting to engage. Healing teammates is unnessecarily difficult because you won’t get the “Heal” button prompt simply by being near, or even looking at, your downed ally. You need your reticule to be at an exact distance, and pointing at an exact spot, the co-ordinates of which are never communicated to the player. Even worse, “successfully” healing an ally simply doesn’t work sometimes. On several occassions have I healed a squadmate and he hasn’t gotten up, requiring me to repeat the process.

The game is full of these minor grievances that should have been easily ironed out. Taking cover near a resupply box means you’re no longer able to reload, since the reloading button becomes the resupply button. Zipper could have made the game differentiate between tapping and holding down a button, thus solving that issue, but nobody’s bothered. The game’s cover system also feels archaic, with enemies that can shooter through solid concrete and unresponsive controls that often see the main character not snapping into cover when commanded to.

At the very least, commanding your squad to attack, mark targets, and take positions works satisfactorily. Allies generally obey commands and setting up co-ordinated attacks can be somewhat amusing. Nevertheless, there are still old fashioned problems that shouldn’t be in such a high profile game. Allies will get stuck in cover or try to rejoin the party by infinitely running against a wall, too stupid to walk around it. They cannot really be trusted when left to their own devices, frequently running into the player’s line of fire or refusing to efficiently defend themselves from enemy attack. 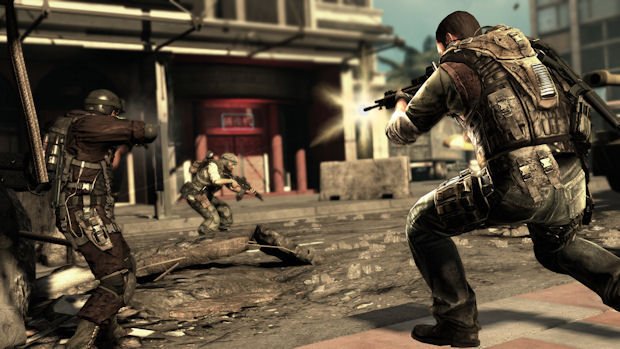 What’s more, the campaign is simply boring. The missions are beyond linear, the combat is nothing that we haven’t seen before, and there are even a few utterly dismal stealth missions that basically consist of slowly walking from Point A to Point B in the dark areas of the map while enemies blindly wander around, totally oblivious. There’s barely any intensity to any of the repetitive battles and even when the action does start to ramp up, the damp sound effects and randomly suicidal enemy AI fail to give the game any sense of immersion or excitement. It’s a “by the numbers” shooter with the kind of problems I’d have expected on the PlayStation 2, but not the PlayStation 3.

SOCOM 4‘s campaign is the pits, but the inclusion of three other players for co-op missions gives the game some extra mileage. Co-op levels are shorter and infinitely sweeter than the main game, with a focused approach on specific goals and friendly competition between players based on their kills, deaths, and completed goals. The problems of healing and snapping into cover still remain, as does the fairly uninteresting combat, but the pressure and the tactical opportunities afforded by human allies add some much needed depth and mental investment to the whole game.

Frankly, it would have been in Zipper’s best interest to scrap the single-player entirely and work on making co-op a more central and lengthy experience. The general problems with reticules and control response would be far less noticeable had they not been given pride of place in an unengaging experience. As it is, despite co-op’s significantly greater appeal, there’s not much meat on its bones. There are several maps based on reworked single-player levels, and the general missions don’t feel varied enough. Once you’ve collected and uploaded data samples or assassinated generals the first few times, you’ve pretty much done it all.

There are custom missions as well, but don’t get too excited. The custom game mode is basically a single-player version of the co-op feature, in which you get to toggle the amount of enemies on the same maps. Nothing to write home about. 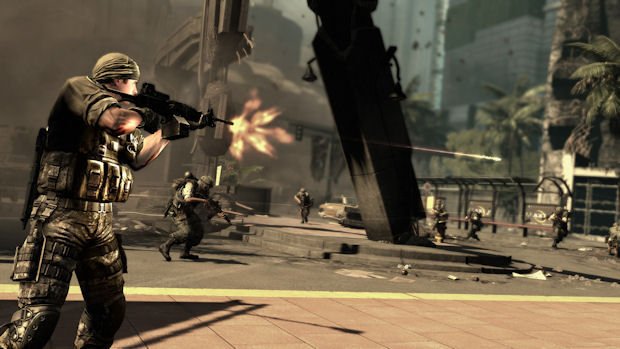 Which leaves SOCOM 4‘s competitive multiplayer as its saving throw and … Zipper didn’t even roll a one. In fact, the dice fell off the table and rolled into a pile of stinking feces. The problems that plagued Confrontation are back, and may very well be worse than ever before.

My first play attempt had me spawn into a match, fall through a hole and get stuck walking around outside of the game’s map for about two minutes before my character suddenly keeled over from a suicide death. This was the beginning of what would be a catalog of glitches and connection errors that seem to typify the SOCOM experience.

SOCOM 4 is laggy to the point of comedy. I once emptied an entire supply of ammo into a player before he finally fell down — not just a clip, either. I’m talking about a freshly spawned character using every last available bullet. It’s like playing a game against a team of ghostly apparitions, strange echoes of human activity that do not exist within our mortal constraints of time and space. It’s utterly astounding, and this is coming from a guy who’s seen gameplay lag in all its forms over the years.

In my short time with the online (and it was short, because I couldn’t keep playing what was, essentially, unplayable), I saw grenades hovering in mid-air, never moving or activating. I saw bodies floating five feet off the ground. I saw people dying from explosions that didn’t actually happen. I’ve seen disconnections and game kicks of every description. In short, I’ve seen every major problem an online game could have, all magnified to absurd levels. 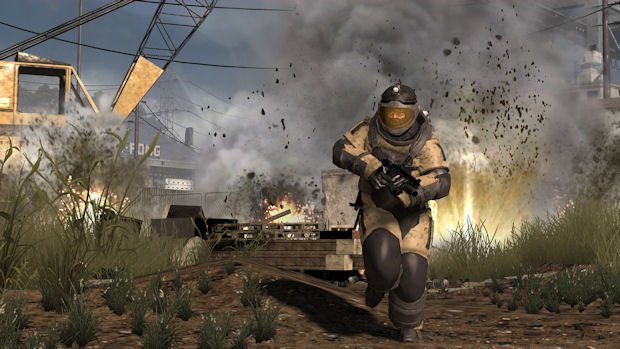 What was most telling about these issues is that they would disappear when enough people gave up and dropped out of a match. I had one match whittle down to just me versus two guys, and all the problems magically disappeared. Same goes for co-op, which also works quite well. It seems to indicate that, at the time of writing, SOCOM 4 just can’t handle as many players as it allows. Anything over four of five combatants seems to destroy it.

For the record, I can see a fairly decent online shooter underneath the lag, if a fairly unremarkable one. Most of the game modes are of the common garden variety, but Bomb Squad, a mode in which one player is a bomb disposal expert and has to defuse explosives while being protected by his team looks to be compelling. SOCOM 4 includes an obligatory ranking system and weapon mod unlocks for those that need their Call of Duty fix. Again, nothing spectacular, but at least it would have given the game more to show for itself had it been working properly. Which it isn’t right now.

PlayStation Move support is included for those still trying to justify the money they spent on one, and it’s the same story as any other traditional game with Move support thrown in. Moving and aiming is fine, and feels pretty satisfying, but the button layout on the motion controller makes anything else, from healing to issuing orders, feel uncomfortable. As is often the case, traditional controls work better overall. As far as I can tell, this is yet another game that doesn’t separate severs between DualShock and Move users, so yet again expect to see a massive player imbalance from those users that can force themselves to use Move and take advantage of the extra aiming precision and enhanced target reticule. 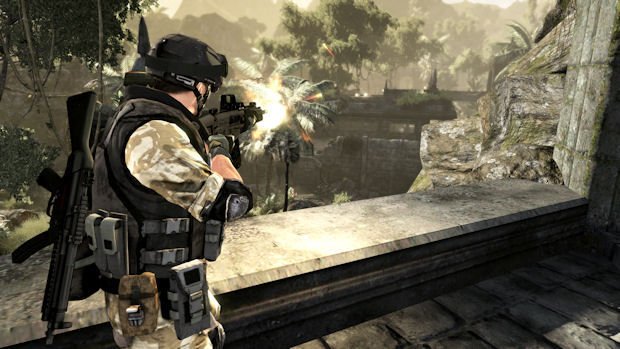 This is SOCOM 4. A game of three parts, two of which are awful/broken and one of which is too shallow because of the time spent developing the others. At best, it could hope to be a functional, if archaic, shooter. At its worst, it’s a glitchy, laggy game that seems to be facing the exact same problems as its prequel, released three years ago.

Worse than that, SOCOM 4 just doesn’t feel like a game that should exist today. Even without the online problems, you’re left with a game that is, at its core, aged and outclassed by so many other modern shooters. It doesn’t even look all that great, with graphics far outmatched by other recent PS3 exclusives such as Killzone 3 and LittleBigPlanet 2. There’s none of the basic polish and flare that one would expect from a Sony-published title.

It’s an antiquated shooter that’s trying to hang with the new blood and failing at every turn. The fact that it’s thoroughly broken serves only to rub salt in an already stinging wound.