I’ll be done in a minotaur two

Hi-Rez Studios has earned a rather interesting reputation in recent years. After creating Tribes: Ascend, a game heavily reliant on the free-to-play model, fans accused the studio of abandoning the game in record time (roughly a year), to focus on “other projects.”

One of those projects is SMITE, a MOBA that’s received a decent amount of traction since its PC beta period in 2012 and eventual 2014 release. Now, it’s on the Xbox One, and works surprisingly well with a controller, despite bringing over some of the same issues to the platform. 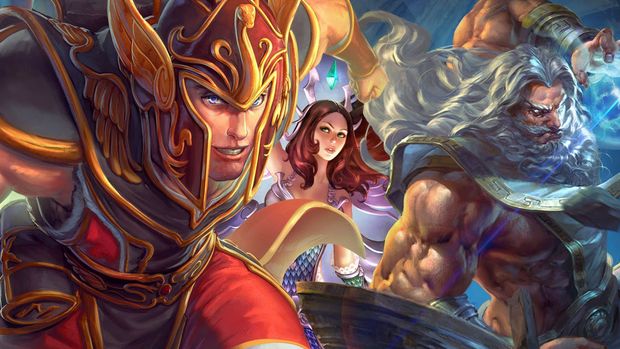 Unlike your typical MOBA experience, SMITE is framed by way of a behind-the-back camera, more akin to an action game than an RTS title. It was predicated on coming to a console day one, mostly because of how simple the control scheme was, and I’m pleased to say that the transition has been incredibly smooth, gameplay-wise. For new players looking to jump in, all you really have to do to play at a base level is understand that the right trigger initiates your auto-attack, and the face buttons correspond to specific abilities, all of which are relatively self-explanatory. Of course, there’s a deeper level of understanding required when it comes to leveling up your abilities and buying items and equipment, but the former can even be implemented automatically if you wish.

Where Smite really shines is with its assortment of game modes that will appeal to pretty much everyone. While MOBAs typically cycle in the same few gametypes with “guest” modes appearing sparingly, Smite goes all out with five variations available at all times. These include Arena (5v5 all-out fights without lanes), Joust (3v3 one lane), Conquest (standard MOBA 5v5 three lane), Assault (5v5 ARAM), and Siege (4v4 two lanes). You can also spring for four modes that pit you against the AI, should you need the practice. In short, the game has it all, and any one mode will keep you satisfied for quite some time. It’s also great that Smite works in a lot of personality into said maps, like the fact that the final “core” is actually a boss character that players have to take down, and the last line of defense is a giant phoenix.

There are 67 gods (characters) currently, all from various faiths throughout history. Characters range from well-known deities like Hades, all the way to Sun Wukong, to Guan Yu. While every god does look different enough visually, I couldn’t help but realize that playing with a controller really exposes some of the monotony of Smite‘s gameplay. For the most part, you’re going to be holding down RT, firing off a boring series of auto-attacks. Although it is easy to pickup, it’s important to realize that although it may look like it, Smite isn’t a full-on action game, and that abilities move rather slowly in the grand scheme of things. In a PC MOBA clicking can often keep you constantly engaged as you’re always figuring out the best position possible, but Smite can feel sluggish by comparison. For those of you who don’t enjoy the genre on PC, this may be the game for you.

It also doesn’t help that a lot of abilities tend to blend together, and in one particular session, I played three gods that basically had the exact same attacks, just with slightly different animations. Since you’re leveling up the same abilities each time without an option to take new ones, you’re going to want to switch gods often to keep things fresh. If you really want to go all in, you can buy the Founder’s Pack for $30, which grants you access to every current and future god.

It’s a pretty great deal as you’re essentially “buying out” the game, but unfortunately it’s only available until the end of the month. Outside of that, you’re left with a rather generous free rotation of 11 characters per week, and an assortment of boosters, items, skins, emotes, and icons. The game is heavily monetized and many things must be purchased with premium currency, but the Founder’s Pack and most of what’s on offer is fair.

There’s also a few issues inherent to the Xbox One version of the game. For starters, no Cross-Play capabilities with the PC edition really sucks. Also, Hi-Rez is only offering up account progress transfers for a limited time, one way to the Xbox One, and it’s just that — a progress transfer. Note that experience levels and most of your content will be ported over, but not everything (Gems, mastery levels, and any stats or activities aren’t eligible). It’s also unfortunate that there’s no inherent keyboard support (like many PS4 games). Based on my experience, nearly every player is content on playing without any form of communication, which, as many know, can be a kiss of death in a MOBA.

SMITE is a fine game and a great choice for folks who may not spend a lot of time on their PC, but there are a number of shortcomings present in both editions that prevent me from playing it as much as some of its competitors. Still, it’s a perfect starting point if you’re looking to get into the genre, especially with the intuitive controller scheme.