The Cooper gang is back in action

Sly Cooper has come out of retirement to try and solve the mystery of why pages have been disappearing from the Thievius Raccoonus, the tome of family history for the Cooper lineage of master thieves. Reunited with best friends Bentley and Murray, the trio set off on a quest through time to save Sly and his ancestry from a mysterious new threat.

He’s been brought back by a new development team this time around, Sanzaru, who also worked on the Sly Cooper HD Collection released last year. For their first time at bat on a wholly new game in the series, Sanzaru has opted to play it safe, making a game which fits nicely within the existing franchise with seemingly no ambition toward redefining it. 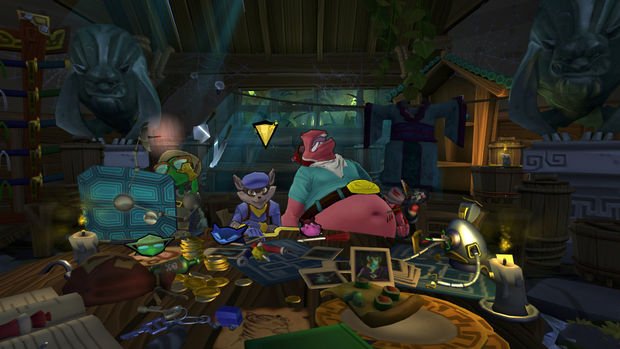 The plot of Thieves in Time is a bit silly, resembling a Saturday morning cartoon in terms of substantive value. By the end, the game seems to give up on the idea of trying to explain itself, and the resolution of the threat to the Cooper ancestors feels a bit hokey and half-assed, but there’s some character development which takes place and expands the general narrative of the series in a positive way. Taken at face value, it’s fun, with clever dialogue and a fair bit of cross-generational humor that should please the mature fans who have grown up with Sly already while remaining age appropriate for it’s teenaged, target audience.

The Cooper gang travels to five places and times within history (with stages in present-day Paris to bookend the game) where he’ll meet up with the Coopers who came before him. Each time period features a moderately sized, open, explorable environment filled with collectibles and patrolling enemies, with several additional stages accessed through specific missions.

Sly 4 controls quite well, with accurate response to commands. The series’ hallmark one-button environment interaction returns, a system which allows Sly to cling to ledges, ropes and footholds with a single command, which also affords the player a little more wiggle room as Sly is guided toward interactive objects. It worked in the past and continues to do so here, taking much of the frustration out of narrow misses by preventing them from occurring in the first place, provided the player remembers to command Sly to cling.

Hidden within each of the stages are a number of collectible items, consisting of clue bottles and treasures. There are thirty of the bottles and collecting all of them will allow you to unlock that stage’s safe for a special reward. Treasures, once located, must be carried all the way back to the gang’s hideout in the stage without taking any damage and within a limited amount of time, adding a fun little challenge in most circumstances. And the players efforts for finding them are nicely rewarded by unlocking a mini-game back at the hideout when all are returned.

It’s a fine amount of exploration-oriented content, without feeling burdensome or overwhelming. All of the collection is optional and missions which are set within the open environment rarely prevent the player from popping off real quick to collect an item they’ve only just noticed without failing an objective. The player is welcome to explore the open stage with any member of the gang, including Cooper’s ancestors once they’ve joined up with the team. Each character has their own set of strengths and abilities, but the game offers very little reason to play as Bentley, Murray (or, later, Carmelita Fox) except when forced to by way of a dedicated mission, while the ancestors get slightly more love with a spot or two per overworld only accessible by them. 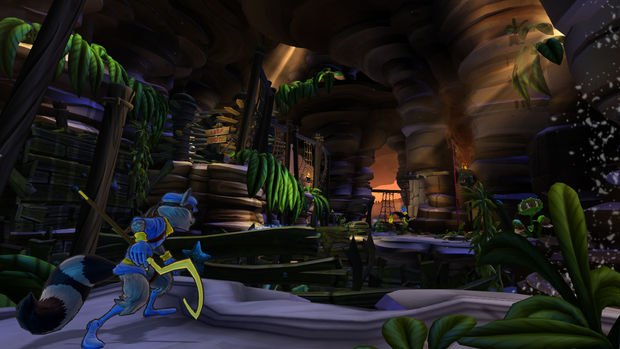 The stages are open in their design, but the progression of the game is almost entirely linear. Missions are designated for a specific character to play (though may involve other playable characters during the mission), and there’s rarely more than one mission offered at any one time, making it clear to the player early on that their options, though available, are fairly meaningless. On the plus side, there are a lot of them, about ten missions in each time period, comprising a campaign with a robust ten or so hours of play.

As the player progresses through missions, new abilities for Sly and his friends may be purchased from within the hideout, using coins collected from destroying objects, pickpocketing enemies and returning treasures. Some, like the paraglider, are essential items but most of the upgrades you can buy are rarely useful gadgets and ammunition types which add some variety but don’t feel as though they contribute in any considerable way.

Other abilities are conferred to Sly through costumes collected in each of the different time periods. When worn, costumes may provide passive abilities, such as resistance to damage or letting Sly blend in with the locals and arouse less suspicion, as well as abilities which can be used to open new areas for exploration or provide solutions to environmental puzzles in missions. The costumes also restrict all of Sly’s basic upgrades, however, limiting access to crucial abilities like the paraglider and any passive bonuses that have been purchased. 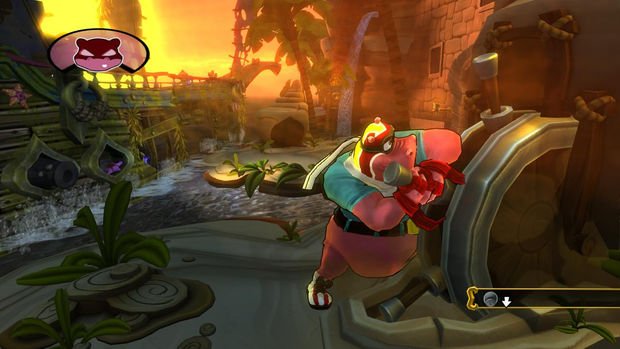 In the early game, it seems as though Sly 4 is going to make pretty good use of these costumes, with the first having some universal appeal in its ability to prevent damage from fire, an ability which comes in rather handy in boss fights throughout the game. Sadly, by about the midpoint, it becomes clear that puzzles in each region deal almost entirely with the abilities granted by the costume received there, with callbacks to older capabilities rare. Every ability winds up being used in the collection of treasures and bottles in the various overworlds, but little further attempt is made at trying to combine aspects of multiple costumes in the design of puzzles outside of boss encounters at the end of each region.

The boss fights themselves are decent, for the most part, and generally require mastery of the skills learned up to their point in the game. There is one blotch, one really poorly designed encounter which relies on the player to accurately aim a slow-moving attack from a fixed camera angle and an enemy whose attacks are timed a bit too tightly for the exceptionally slow animations related to the necessary costume. This particular battle could be enough to make a player throw down their controller in disgust, and rightfully so, but they should be comforted by the knowledge that it never gets any worse than that.

Outside of the third-person platforming gameplay which makes up the bulk of Sly 4, comes the return of Bentley’s hacking mini-games and a few other distractions. These include labyrinth mazes where the player guides a ball using Sixaxis motion controls to tilt the environment, side-scrolling shoot-em-up stages and a few, kind of forced rhythm matching games. They work great for breaking up the flow and preventing tedium, while still short enough as to be inoffensive if one type of game isn’t your cup of tea (with the possible exception of a belly-dancing sequence which, in the current climate, might actually offend someone). 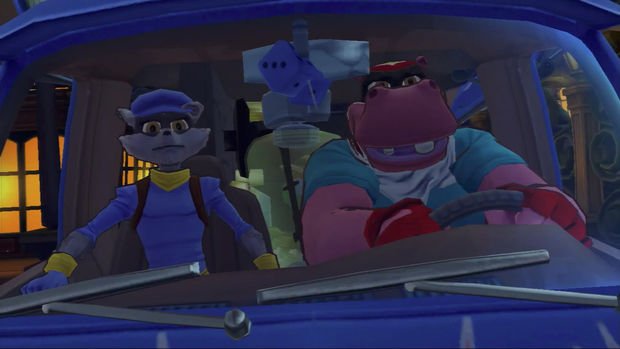 In fact, “inoffensive” is probably the word that best describes Sly Cooper: Thieves in Time from the perspective of a fan. It fits right in with its predecessors, offering a rather lengthy campaign and a fair quantity of optional content that’s fun to play, though not particularly challenging most of the time. While there may be an expectation that a series’ arrival in a console generation outshine all that came before, Sanzaru has made a perfectly acceptable game that may not advance the genre, but feels comfortable with right where it is.