I might be the wrong person to write this review simply because I can’t get over cuteness and charm, which was pretty much all I was expecting to enjoy about Slime Rancher. Farming sims have always held little interest for me mainly because of the eventual tedium that sets in, but the personality and charm I had seen in previews practically forced my hand. What the hell is it about anthropomorphic slimes that is so cute? I know it’s what drove me to play the original Dragon Quest, so even if that was the only thing Slime Rancher did right I probably would have at least gotten a kick out of it.

Luckily, that isn’t the case as this is without a doubt the most engaging work simulator I have ever played, despite falling short of the more immersive “slice of life” expectations set by other games in the genre such as Rune Factory, Harvest Moon, and Stardew Valley.

First of all, Slime Rancher lacks some of the typical meat you will find in other farm games. There is no town, no NPCs to interact with. You won’t get married, make babies, and establish a lineage; this game is very strictly focused on the work you will be doing to build a thriving slime farm, the market your tasks as a rancher revolve around, and the expansive environment you will traverse during your time spent in the world. There is a “story” here, all passed to you through notes in an email system, but I found it so utterly disengaging in its loose presentation that I ignored it entirely.

I also didn’t find it necessary to enhance my engagement level. There is a ton to do here, so much you won’t have time for all of it. Although there is a typical day and night cycle, I found myself seldom sleeping through the night. Control of my farm quickly slipped through my fingers as I expanded all of my available plots, and it was all I could do just to feed my existing slimes and keep them happy before I was able to become more grounded and find a decent balance among the various activities available to me. 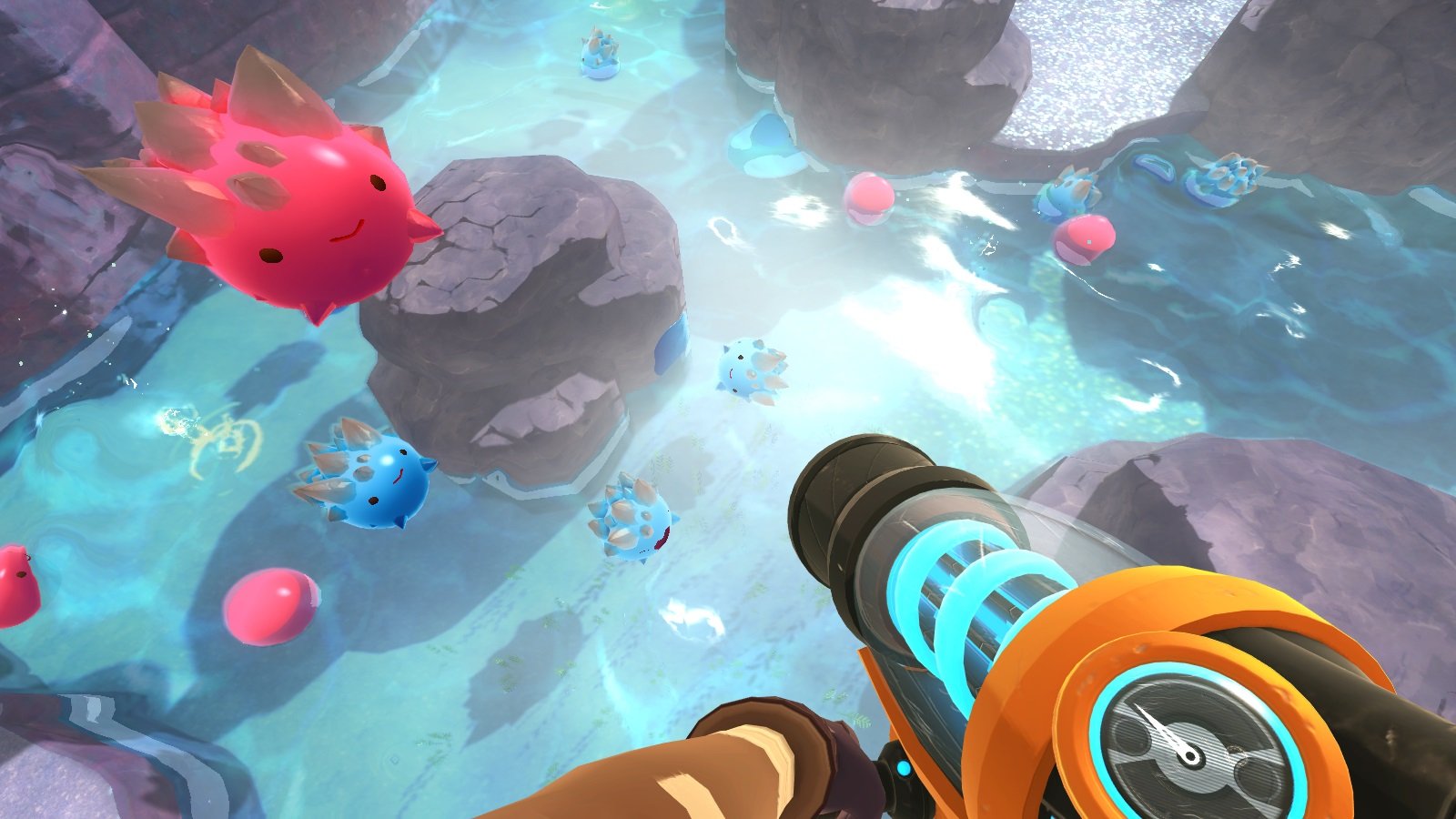 Again, you are not growing crops, (well, sometimes) but alien livestock. And it is a commodity which demands your constant attention and diligence. Slimes have curious and unpredictable personalities, and will often try to escape their pens, especially when hungry. Very early on, this doesn’t seem like a big deal. Sure, they might invade a chicken coop or two, or clean a tree of its fruit, but pick them up, put them back in their pen, and all is right again in the farm.Unless they transform into a Tarr. Then you’re screwed. 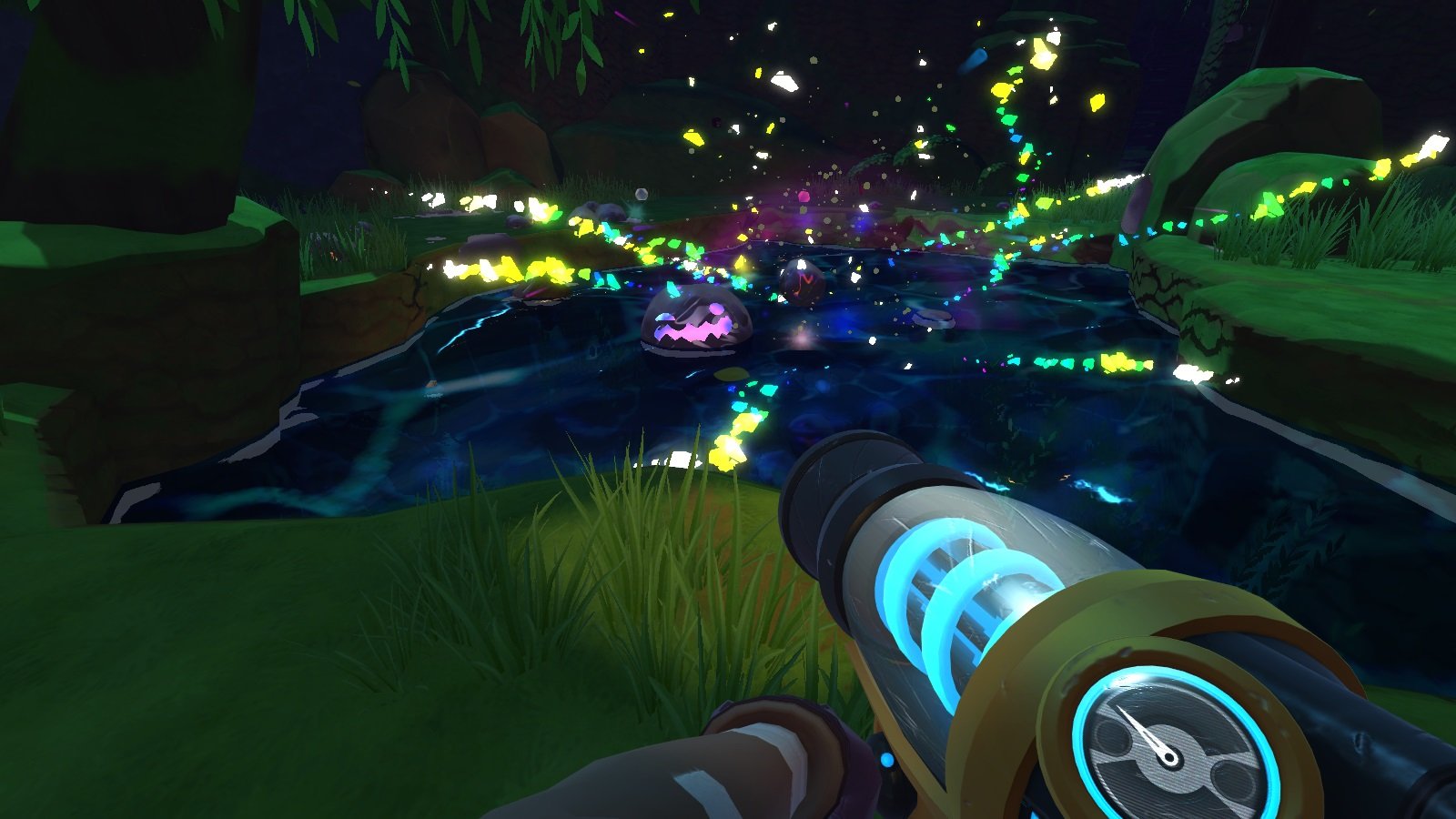 When you feed a slime, it poops out a “plort,” a little diamond with properties reflecting what breed it is. The various plorts all have fluctuating market values, so you will want to have a way to harvest as many kinds of plorts as you can to continue making a good flow of cash. If a slime eats a plort of another type of slime, it will adopt some of the properties of that slime. So a rock slime eating a tabby plort will turn into a rock tabby slime, and drop both kind of plorts when it poops, being a far more efficient source of income, but also growing larger and taking up more plot space. The trouble comes when a slime comprised of two types eats the plort of a third slime type. This will result in a transformation into the jack-o’-lantern looking Tarr, a slime that can assimilate other slimes in the environment into Tarr, quickly destroying a farm, and attacking the player on sight.

What makes Slime Rancher more engaging than other farm sims is how active you will constantly need to be. Plots can be upgraded for better security, but inevitably you will have an escapee or two and have to deal with a scourge of Tarr ruining your farm. It pays to be constantly on the move. Slime Rancher sometimes lacks the more relaxed tone of other sims, while maintaining an element of overwhelming responsibility; you will never have enough time do everything, so you’ll need to sit down and focus on a few specific goals at a time, whether that be providing for your slimes, performing market trades, focusing on farm expansion, or trying to further explore the environment around you to find blueprints for new gadgets. You will be running around a lot of the time at a frantic pace trying to get everything done, but despite that I never felt pressured or rushed; the best times I had with the game were when I was casually playing and taking my time, and I could see myself going back to my humble ranch indefinitely over a long period of short-burst game time. 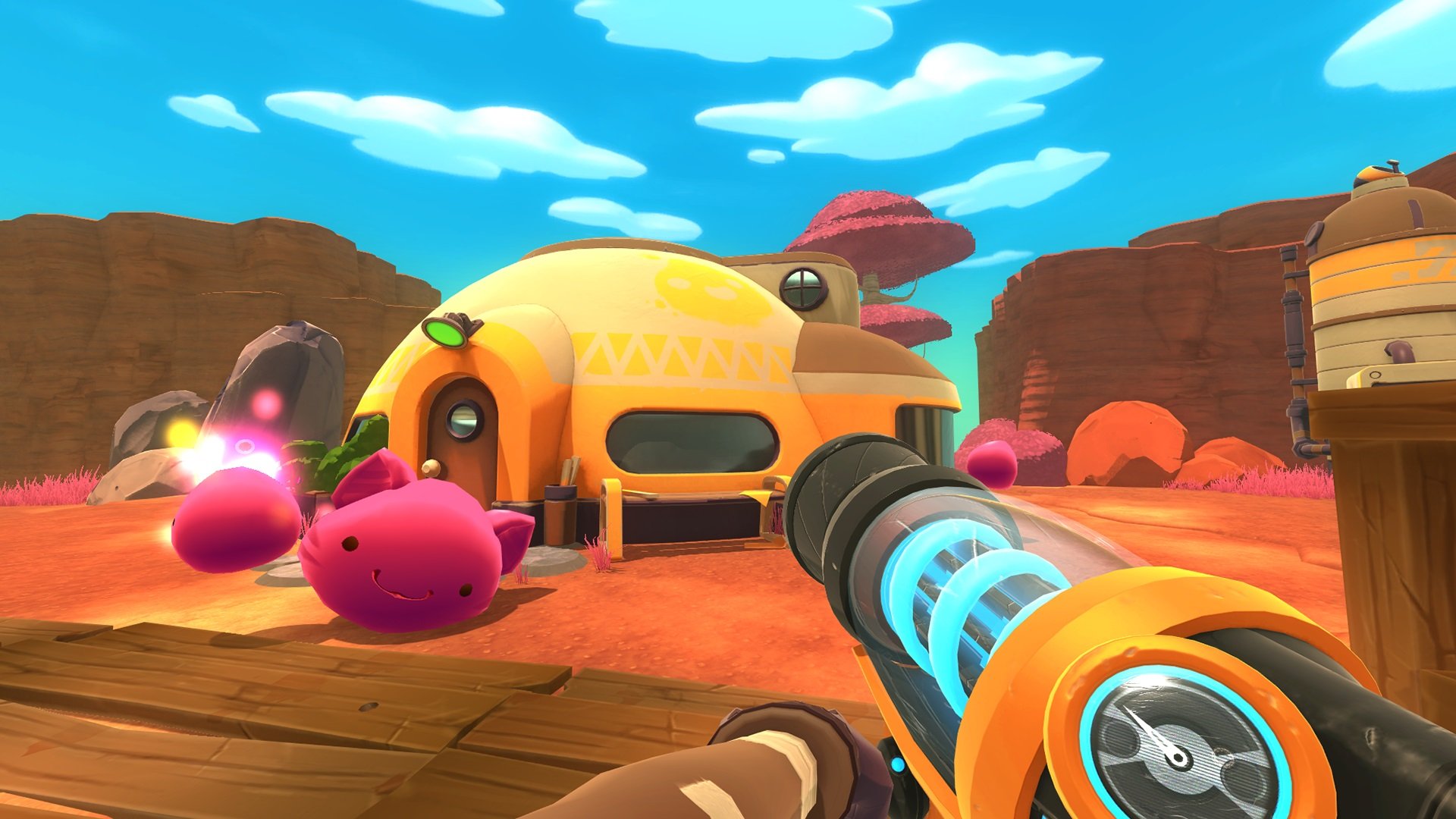 Outside of the ranch you will be forced to move nimbly. Even collecting plorts can be a challenge if the slimes in the vicinity have the ability to damage you. Large arenas of wild slimes can quickly turn into a progressively more dangerous death trap especially as night falls, so you sometimes need to be very tactical and specific in your approach to collecting necessary resources.

Slime Rancher is as much a non-violent first-person shooter as it is a farm game, and it pays to be aware of your surroundings and have a quick reaction time in case things go south. This meta game of dodging aggressive slimes, carefully traversing tricky parts of the environment with your jet pack, and occasionally fighting the odd Tarr with bursts of water from your vacuum gun is infinitely more exciting than the typical actions you’d find in this style of game, and adds a little spice to an already flavorful soup of the abundant duties you’ll be performing in and around your ranch.

As far as performance goes, if that was a concern at all, I haven’t experienced any issues while playing even on a lower-end rig. When there are tons of slimes, plorts, food, and farm enhancements on-screen, frames might drop here and there but it ran great overall. I was happy that it had such good controller support; I found it to be a more comfortable experience with controller in hand where I could kind of lean back and relax a bit, and that ended up being my preferred method of playing the game. 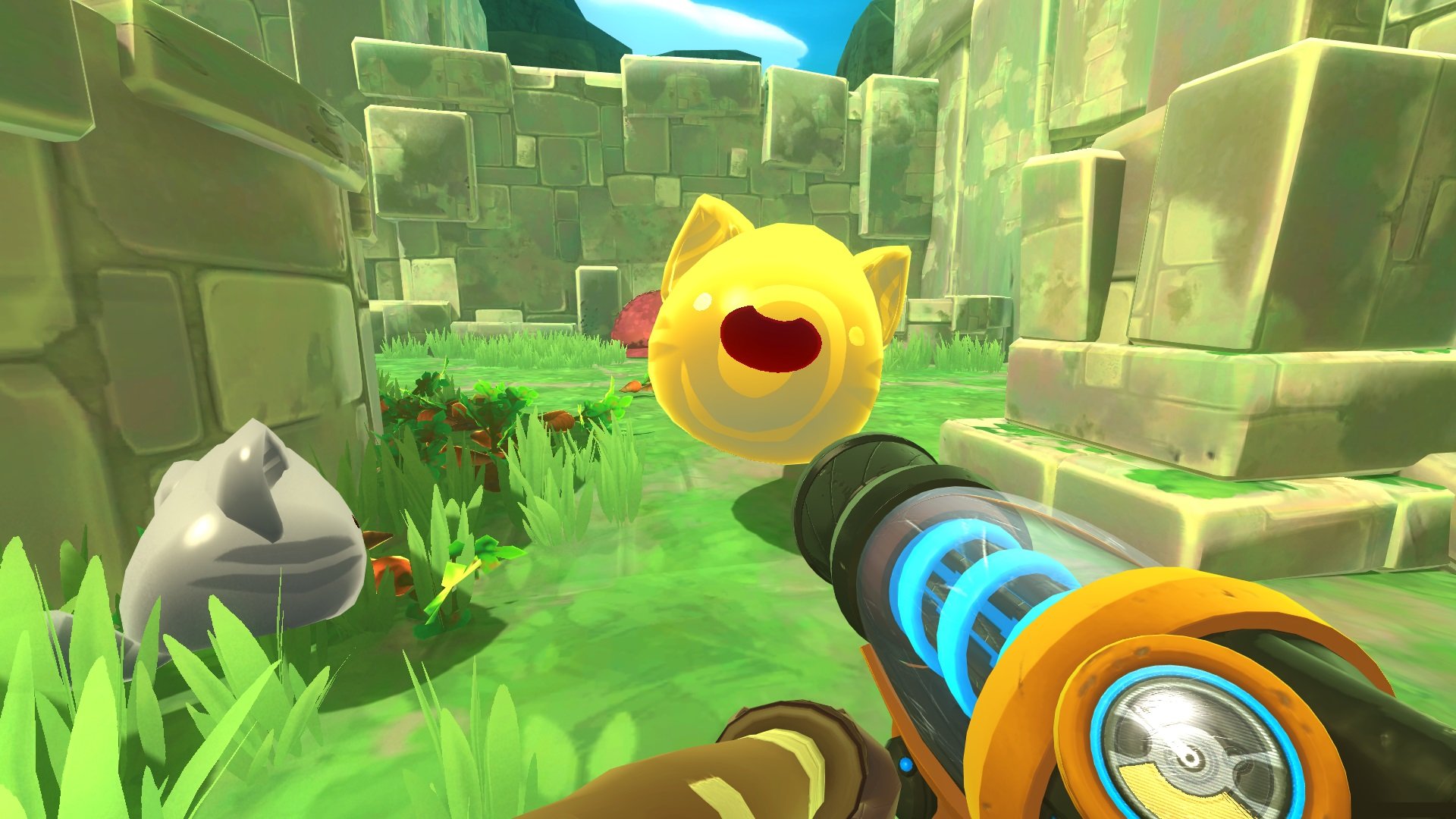 Otherwise familiar farming mechanics wrapped up in personable bubblegum charm separates Slime Rancher from the rest of the crowd. This is the sort of game you’ll want to play on a rainy weekend, or after a bad day of work. Despite the dreadful, occasional presence of Tarr, the only other real threat in the environment are the angry and hungry feral slimes, but even those can be tamed with a little midnight snack.

Slime Rancher is about managing, collecting resources, and playing the market while cute little blobs smile at you and jump around. While it moves at a frantic pace at times, it is quite relaxing and cathartic. And although sometimes repetitive, apart from those inevitable moments where the task at hand begins to wear its welcome between major expansions or discoveries, Slime Rancher is an utter, charming delight to play.