SkyDrift is one of those games that just feels like it belongs in an arcade with an extravagant, ground-shaking cabinet. Instead, developer Digital Reality took a more financially responsible route by tossing it up on Xbox Live Arcade and PlayStation Network.

I’m of the belief that there aren’t enough aerial combat games being made today. Make no mistake, SkyDrift is a racing title first and foremost — but it does delve into dogfights ever so slightly. And that makes me happy. 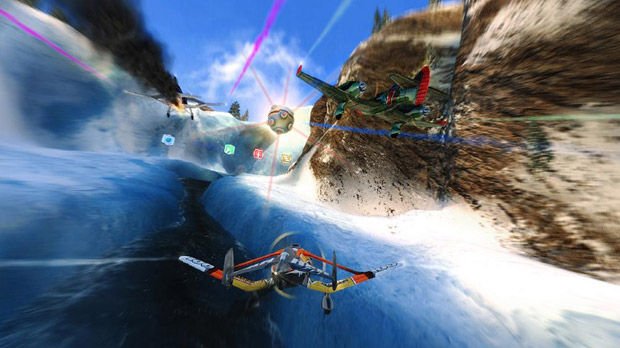 SkyDrift is broken up into three modes, each of which ends up feeling distinct enough. First, there’s Power Race, a fairly standard racing mode where power-ups are littered throughout levels. These include things like mines, machine guns, bullets, shockwaves, shields, and the ability to repair your plane.

Adding to the complexity, you can pick up any power-up a second time to upgrade its effectiveness; what’s more, you can optionally remove these items in exchange for a bit of boost power. Since boost is often best earned by destroying your opponents — or performing tricks, like flying close to environmental hazards — this mechanic ends up being remarkably useful when you’re in first place by a decent amount.

Next up is Survival. This mode follows the same basic principle, except instead of reaching the finish line, you’re merely trying to stay ahead of the pack. Whoever is in last place when the countdown reaches zero will be kicked out until there is only one person left, so there’s strategy involved with hoarding power-ups and boost until the time is absolutely right.

Speed Race, on the other hand, opts out of combat entirely. Instead, rings are placed across the map, all of which give you a dramatic, but temporary, increase in speed. Surprisingly, this mode ends up being the most chaotic, as hitting every last ring will have your plane moving at dangerously fast, even out-of-control speeds. 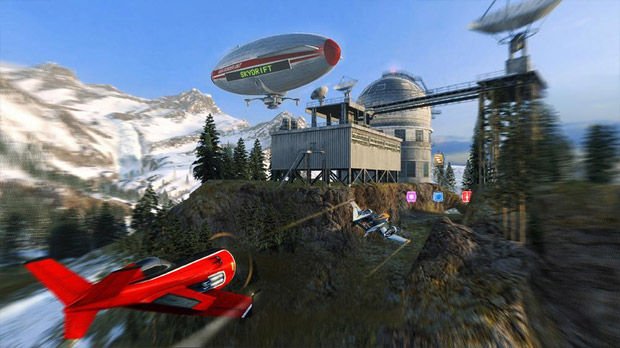 None of the modes in SkyDrift are particularly fresh, but they work well, and the same could be said of the game in general. The most appealing aspect, to me, is the level design and art style.

For a $15 downloadable, a lot of time, energy, and polish went into getting the visual fidelity to where it’s at. Levels range from tropical islands, to glacier fields, to volcanoes. The use of color is to be applauded, with my favorite example being awe-inspiring hot springs found in one of the levels.

Unfortunately, there are only a handful of maps to play on. The game tries to extend their life by putting missions on “reversed” tracks, but it’s unfortunately not enough to keep you interested until the conclusion. It seems like a clear quality-over-quantity stance was taken, and while that is respectable, the lack of content ends up being my biggest complaint here. 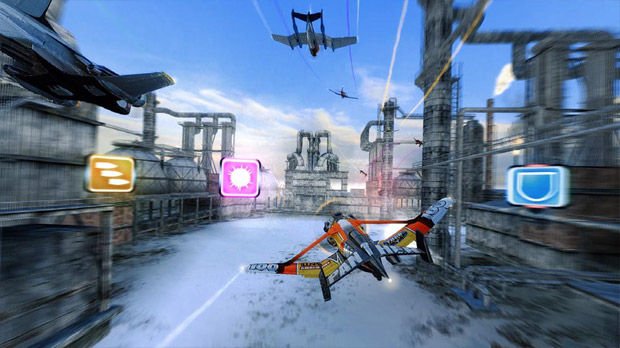 Thankfully, unlockable planes, skins, and badges help to partially fight off the repetition. Vehicles themselves are differentiated by stats across various categories like maneuverability, armor, and boost power. So, there is strategy to be had depending on which mode you’re playing.

If you’re content with finishing all of the single-player events in second or third place, SkyDrift will likely take you a few hours to beat. The AI competitors are rather aggressive, and it seems like there is always one that manages to get very far ahead of everyone else in the final few sets of missions.

Online multiplayer offers all of the aforementioned modes and content for up to eight players. In the matches I played, everything worked exactly as you would hope on a technical level. This is reassuring, since it sounds like Digital Reality has plans to introduce deathmatch modes as downloadable content eventually. 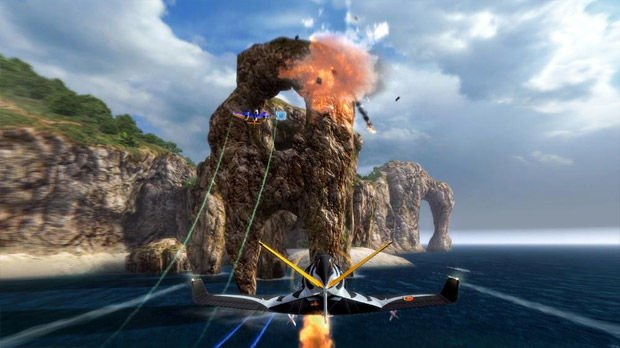 Seeing everything there is to see feels like a chore after a certain point, but overall, SkyDrift still remains a well-executed, polished experience. The planes feel right, and the combat, while not exactly in-depth, provides for some fun moments. This game may not be the best of its class, or put forth any noteworthy new concepts, but it shouldn’t be allowed to slip into obscurity, either.

At the end of the day, you can only expect so much content out of a $15 game. What that threshold is will vary from person to person; for me, there’s not quite enough being offered. I suppose that’s what post-release add-on content is for, though.