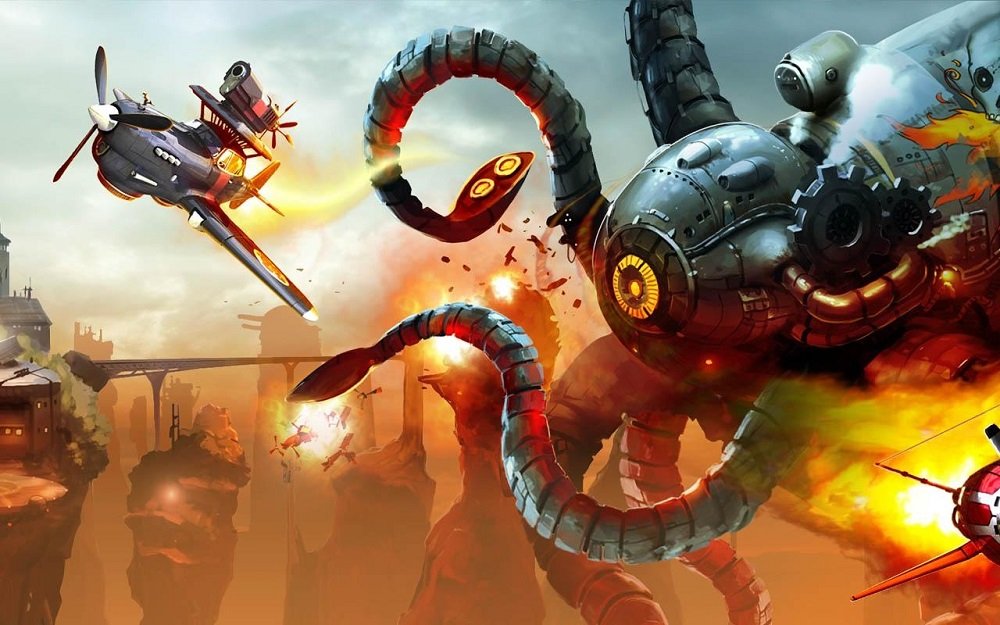 Sine Mora was a celebrated shmup that came blasting out of a partnership between Hungarian studio Digital Realty and Japanese outfit Grasshopper Manufacture way back in 2012. It received praise at the time for its visuals and gameplay whilst leaving some reviewers scratching their heads at its paradoxical, time-traveling storyline.

It’s nearly six years later and THQ Nordic have seen fit to re-release the game on a new generation of consoles, with a selection of new multiplayer modes, 4K resolution options, and the hopes that a whole new audience, who may have missed out first time around, will be excited to experience the game’s bullet-hell battles and delightful visuals for the first time.

Sine Mora is the story of two intertwining tales taking place against the background of war. An anthropomorphic cast of pilots, with the ability to manipulate time, reach for the skies for reasons of duty or personal vengeance. The storyline follows the furry fighters of the resistance as they embark on last-ditch suicide missions against the genocidal Layil Empire, driven by pride, patriotism and good old-fashioned blind rage.

The two plots run parallel and are narrated (by some frankly hit-and-miss voice actors) in an all-new English dub. Because the storyline deals with time-travel and its resultant paradoxes, it can be frankly hard to follow the first time through, especially as it is trickled to you through just a few pages of dialogue. It is also quite dark, which is fine it itself, but its heavy themes of genocide, war atrocities, parental loss, suicide and even rape-blackmail feel somewhat unearned by the brevity of the game, and sit awkwardly alongside the arcade-y, score-attack action.

However, kudos to the now-defunct Digital Reality for giving Sine Mora such an intelligent reality-warping plot, one that reveals more to the player on numerous playthroughs, before reaching its ultimate time (and brain) bending conclusion.

But this is a shoot-’em-up, and ultimately it’s the gameplay that is paramount. Sine Mora EX manages to be one of the more accessible of the bullet-hell shooters, with its story mode laying off the heat for new players. The attached arcade mode dumps those more experienced into an eye-watering dirge of orange and blue projectiles, dodged either in real-time or by hitting the trigger to activate a rationed slow-motion effect, allowing you to briefly slip between the hardest of death-volleys.

In keeping with the game’s Chrono-theme, Sine Mora‘s ultimate antagonist is the clock. Taking damage reduces the time limit as you jet from one checkpoint to the next, shooting down enemies on land, sea and air for small time extensions. Allow the clock to hit zero and it’s game over, man. This encourages the player to allow none of the enemies to slip past, forcing you to face the opposition head-on and removing my own natural instinct to cower in the corner unnoticed.

Fortunately, you can strengthen your dog-fighting capabilities with various power-ups and speed boosts, as well as utilising each character’s respective sub-weapon, allowing you to give the enemy its own satisfying taste of screen filling firepower.

Where Sine Mora EX stands above the clouds to its brethren is in its beautiful steampunk visuals. The stages are lavishly created and alive with movement, taking you from gorgeous island paradises to miserable underground military bunkers, all given depth and life through multiple layers of parallax scrolling and intricate background detail.

Gorgeous lighting and visuals effects accompany every shot, crash and explosion. Gusts of wind blow debris, underwater bubbles and slipstreams evanescence into nothing, and rich foliage and greenery belie the massacre happening above them. Unfortunately, this exquisite detail can sometimes lead to a loss of fidelity between buildings and bullets, leading to some occasionally unfair damage. Equally unfair are a couple of “surprise” insta-deaths the game throws at you, which are frustrating on first playthrough.

The game’s bosses are a highlight. Wonderfully designed (by anime veteran Mahiro Maeda) and are slickly animated. Fifty feet iron-men, mechanical spiders, even an opulent Persian airship all send death in your direction, but look damn good doing it. On the lesser aesthetic side I found the soundtrack, by Silent Hill composer Akira Yamaoka, kind of drab and too mellow. I understand that it is supposed to reflect the story’s sombre tone, but I feel it actively takes away from the intensity of the action.

As previously stated, Sine Mora EX features a host of modes old and new, including a novel couch co-op feature where one player controls the aeroplane whilst a buddy takes over gunning duties. There are also an array of two-player Versus modes, as well as Boss Training and Score Attack modes, alongside multiple difficulties for loners like me to take a stab at.

Sine Mora EX succeeds in being a bullet-hell title that can be approached by those perhaps not quite so savvy when it comes to twitchy, pixel-perfect movement. Whilst there is challenge available here to the seasoned shmup pro, it brings little new that would rock their world. One huge positive is its cheap (digital) price-point. At just $10 I think those even remotely intrigued should hit the throttle and nosedive right into the thick of battle.

I don’t consider Sine Mora EX to be a game that sets the genre on fire, or redefines shmup gameplay in general. But it is very well-priced, looks fantastic, has replay value and is a fun and ferocious slice of old-school arcade action, one that can be enjoyed by battle-scarred veterans and eager rookies alike.