The highlight of this game for me was when a disco ball played a cheap sound-alike of Sandstorm. That should be all you need to know.

But, if those words don’t paint a bleak enough picture for you, read on to find out all about the sad interbreeding of laser-cats, bacon, and mediocre shooter mechanics that make up Shooting Stars! 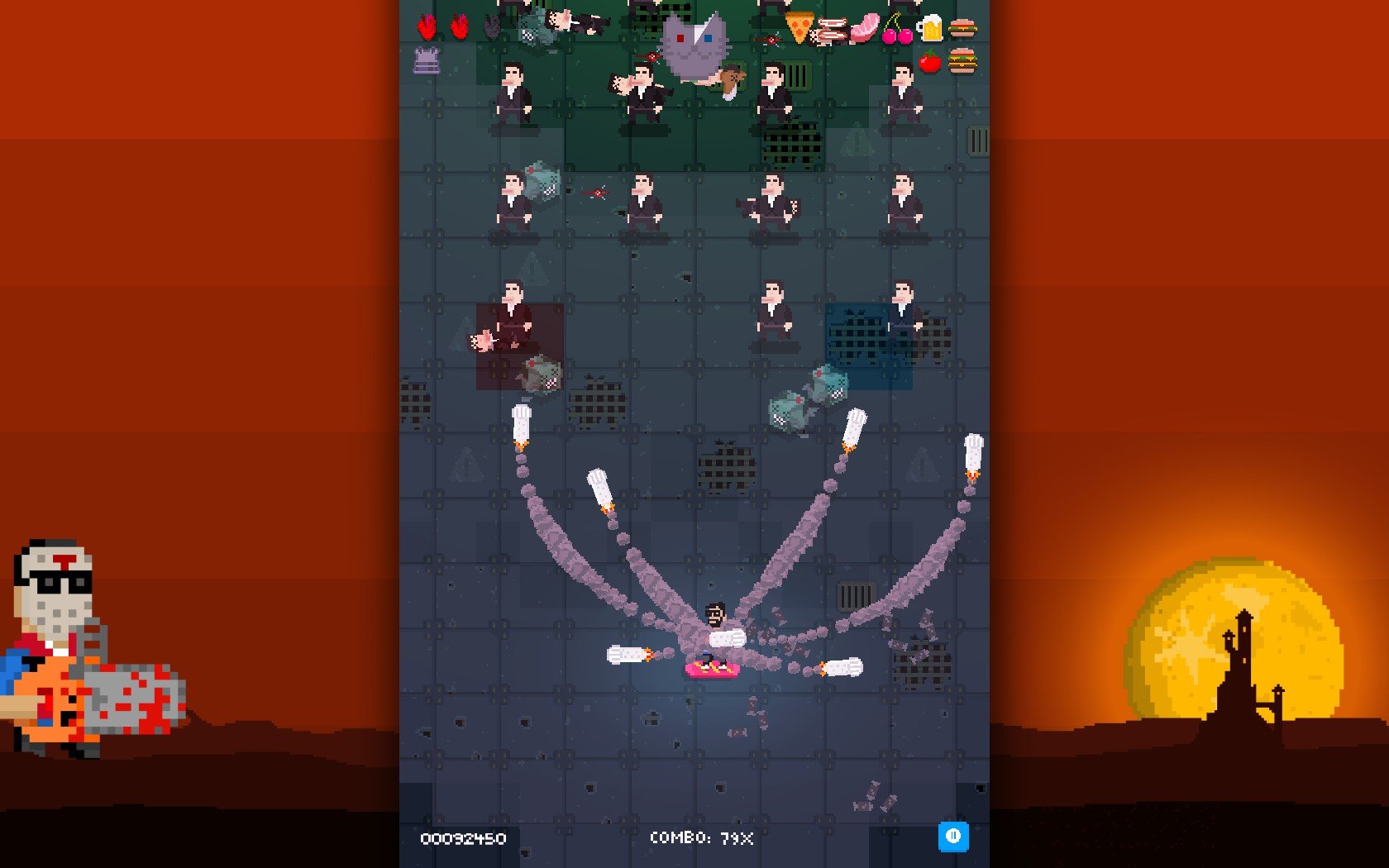 Shooting Stars! is a top-down shooter drenched from tip-to-toe in internet memes and decade old jokes. Every boss you fight is a celebrity or YouTube personality. Every power-up is based on some tired old meme. The game-over screen has you admonished by the success baby or John Goodman’s character from The Big Lebowski. If that sounds like it would get old fast, you aren’t wrong.

As a shooter, it’s a functional but not exceptional example of the genre. It’s littered with the same tropes, power-ups, and enemy types you’ve come to expect from a shooter since playing Raiden on the SNES. There are the typical double-shot, triple-shot, and homing missile kind of power-ups one would expect from a retro shooter but delivered with an internet humor twist. Enemies attack in predictable waves and fire in predictable patterns. Everything in the shooter department is completely standard, not a single risk taken. 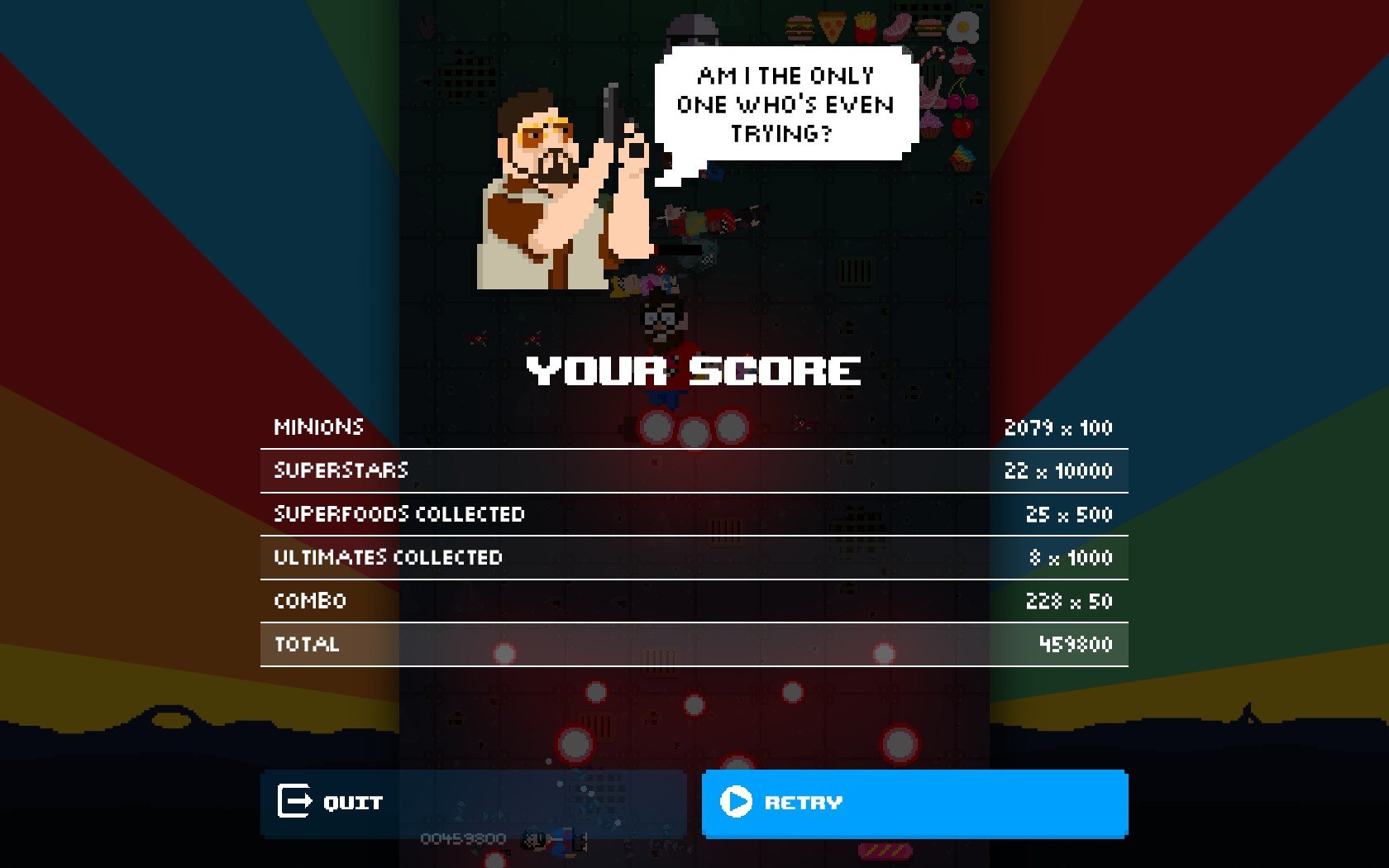 Shooting Stars! bills itself as a roguelike, but I think that is a bit of grandstanding. The power-ups you collect and bosses you fight are randomized each time out, but there isn’t so much variety to the types of items available that separate runs will feel substantially different and the bosses are mostly interchangeable. As a score-attack game, there is no ending, after playing through six levels and defeating the “final” boss, you simply start over at an increased difficulty. The simplistic levels and enemy patterns either repeat, or are so generic that they fail to distinguish themselves from each other in any meaningful way. I swear I was blasting through the same waves loop after loop.

In what I imagine is a concession to its mobile ports, the gameplay is laid-back compared to most bullet-hell shooters. Enemies are sluggish and slow on the trigger while there are plenty of health power-ups to go around. Even the meme-tastic equivalents of the standard SHMUP bomb are limited only by a brief cooldown instead of the traditional stockpile, allowing you to fire with abandon. This is about as mellow as a shooter gets. 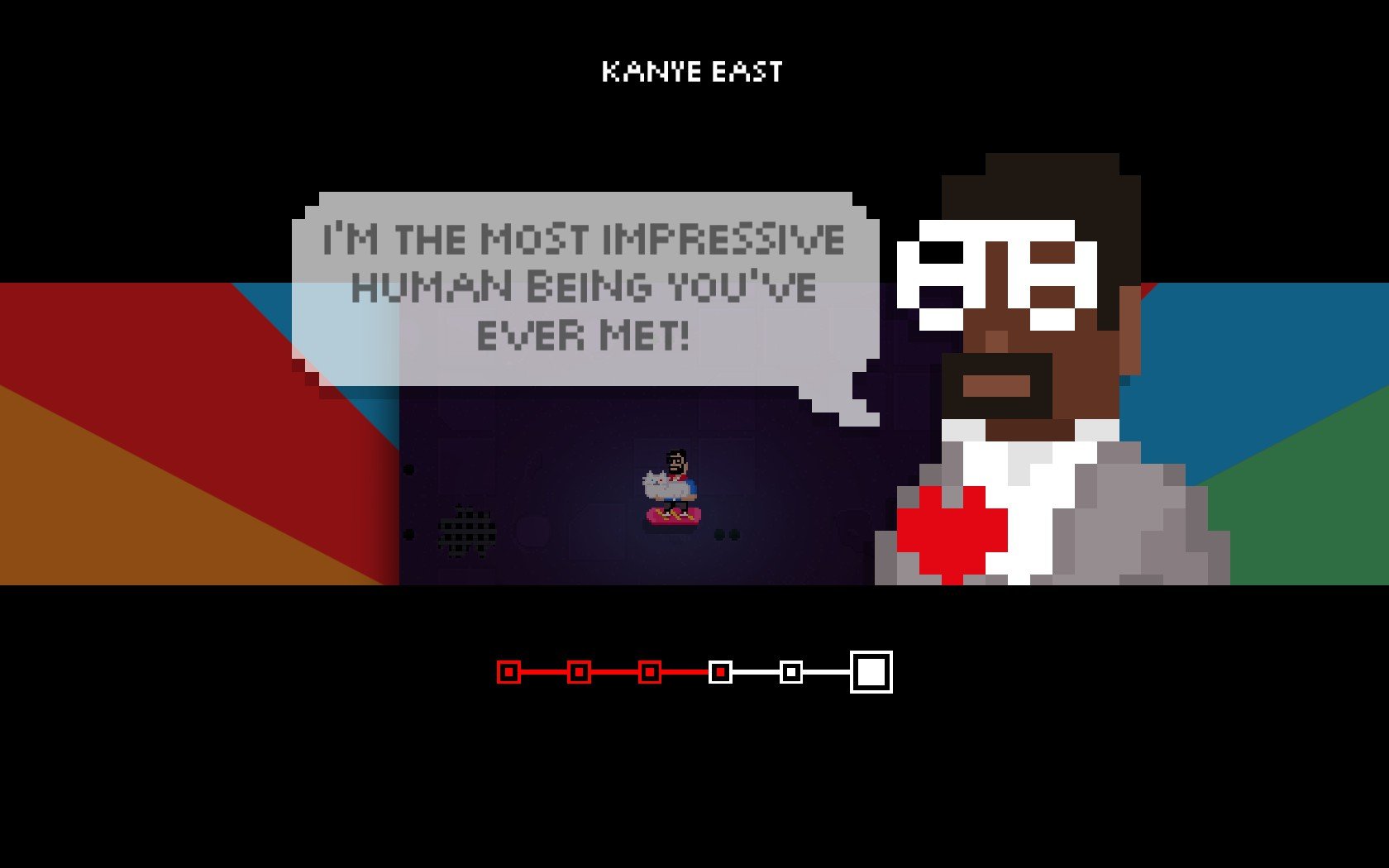 With such humdrum gameplay, it’s up to the game’s humor to carry the load. It doesn’t. Those weak knees, riddled with splotchy memes and weedy with exhaustion, completely buckle under the load.

The premiss behind Shooting Stars! is that aliens have invaded and are impersonating celebrities to take over the world. What this means on a practical level is that much of the game’s attempt on humor is based around cheap catchphrases and bad celebrity name puns. Here, I’ll give you some examples –

David Husseldoff, “I’ve jumped the shark once. I can do it again!”

Gabe Oldwell, “The chance of you surviving this battle is less than me releasing Full-Life 3!”

Shia La Beef, “Follow your dreams and make me a sandwich. Just do it!”

They say comedy is about timing. Blood Irony must have taken that to mean “all of the time.” The game constantly spits lines at you, never missing the chance to fill the void with some kind of lame punchline in search of a set-up.

None of it is considered or clever, it’s just a wall of noise. Pick up a power-up and the player character might quip “It’s not vibranium, but it’s still awesome!” What does that mean? Just name-dropping a nerdy reference like the fictional metal Captain America’s shield is made of isn’t a joke, it only resembles one. These are just words smashed together with an expectant pause at the end, waiting for applause like some tragic Floridian governor. 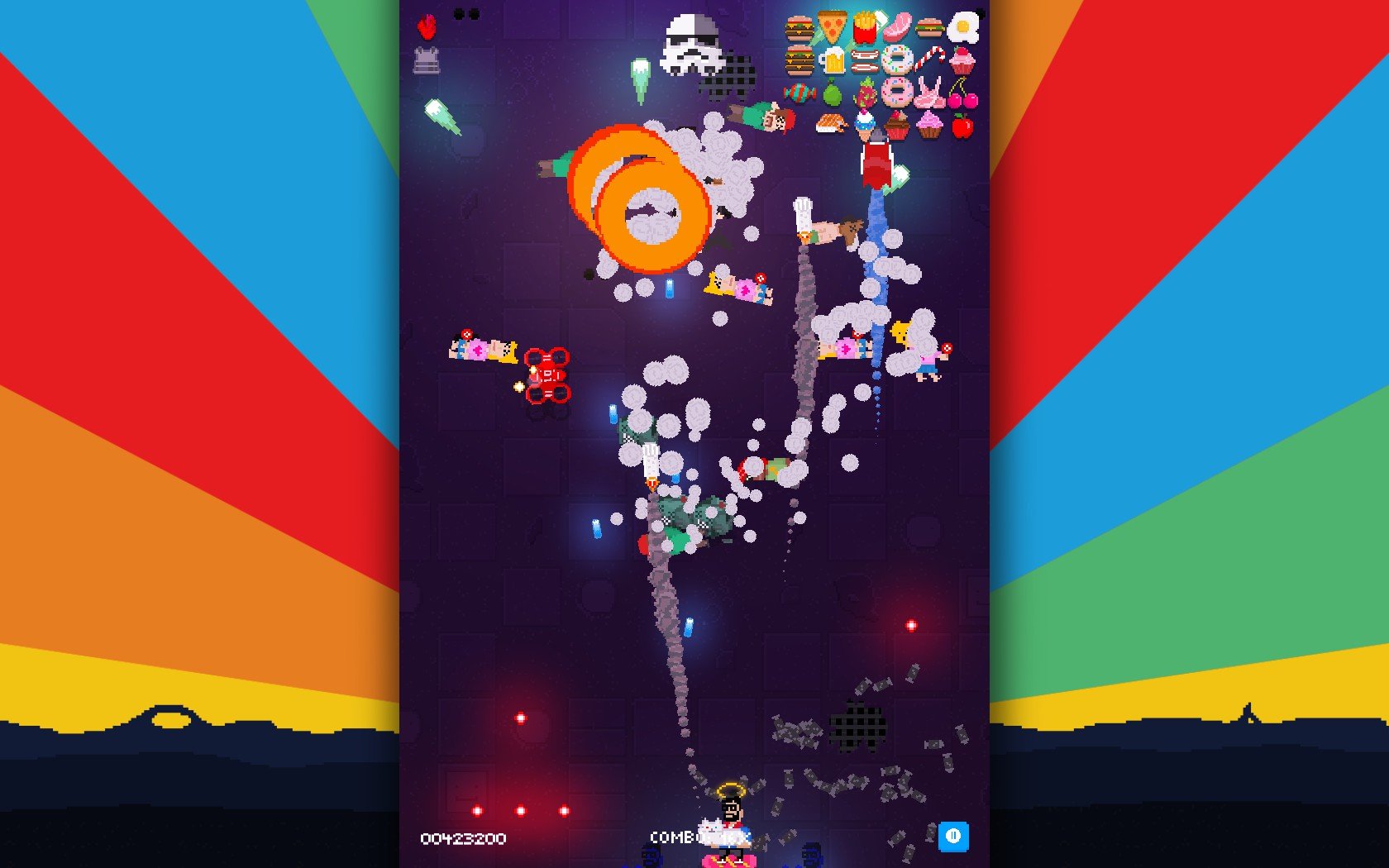 Don’t play this. Lord knows, I’m a man who can appreciate a mindless, repetitive action game for what it is, but don’t aim this low. There are expertly crafted, bespoke mayhem facilitators like Luftrausers, The Binding of Isaac, or the sublime Downwell you could throw yourself into if you crave quick-session annihilation. Games with both excellent gameplay and a better sense of humor.

Even if you love internet humor and your folder of dank memes is swollen to bursting, don’t buy this. I don’t mean to be cynical, but why pay $4.99 for a banal shooter featuring tired internet humor? Have you been to Newgrounds? They are literally giving that kind of shit away over there. Save that $4.99, buy yourself a copy of Downwell and give the change to a friend to help them buy a copy of Downwell.

There is no reason to waste your time on a game as unambitious as Shooting Stars! You can say it’s a small game, a joke game, a mobile game, and that’s all true. I’m not holding it to ridiculous big-budget standards. But even within its genre and scope, there are better playing games out there that don’t insult your intelligence on a regular basis. Play those instead.