Shoot Many Robots is the first solo title from Demiurge, a Massachusetts-based developer with nearly a decade of experience working on other people’s games — including big names like BioShock, Brothers in Arms, and Mass Effect. For the first game all their own, they opted to create a side-scrolling platform shooter stuffed to the gills with big guns, bad robots, and a lot of loot.

P. Walter Tugnuts, a redneck with a love for beer and explosions, is the only thing that stands between a world totally dominated by metal monsters. His home destroyed in the game’s tutorial stage, he rescues a recreational vehicle from the passionate embrace of robot and hits the road with vengeance in his heart. It’s the most threadbare of plots, which is totally fine since nobody really needs a reason to want to shoot robots.

Wanting it isn’t enough, though. Robots are deadly and, as the title suggests, there are a lot of them. Walter is going to need to equip himself effectively to deal with the horde. Using the RV’s shower as an armory (because, really, what else would you use it for at this point?), Walter can be equipped with a primary and a secondary weapon as well as head, torso, and leg gear, and purchase new equipment from the in-game shop using nuts collected from dead robots.

Primary weapons have unlimited ammunition and decent variety. Pistols, submachine guns, assault rifles, shotguns, and flamethrowers all are represented here. Secondary weapons are the heavy hitters, consisting of rocket and grenade launchers, land mines, pretty much anything that can put a serious hurt on someone. These weapons have limited use, though ammo is replenished at checkpoints in stages or by collecting power-ups dropped by robots.

The complexity of equipment in Shoot Many Robots becomes apparent once you start looking at the armor options. Everything you equip gives a bonus and almost all items can have a significant effect on your gameplay style. Special abilities are conferred by wearing them, including ground sliding which can knock robots into the air for quick disposal, hangtime to let you rain death from the air in a slow glide, and a devastating ground pound. These abilities have ratings which determine their duration or strength of effect. Some equipment will even take away special abilities entirely, invalidating them when in conflict with another piece of kit.

The individual variety of all of these items is significant in another way, as they force the player to consider how every item they’re using affects their gameplay style. Elements of equipment which might be very negative for one type of weapon can be awesome when used with another one. A prime example of this can be found in a paper bag head item which offers significant damage bonuses at the cost of nearly all accuracy. The item is crippling to most guns, but doesn’t detract from the use of a flamethrower and even can be highly beneficial with some shotguns for increasing spread. 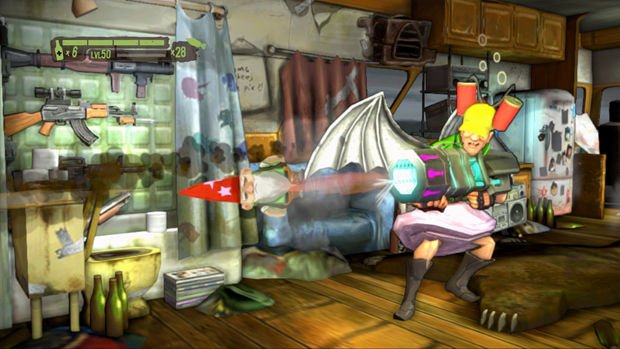 Players will have to think about it, too, as the robots are utterly relentless and placed by devious level designers. There are fifteen levels to explore in Shoot Many Robots, with maps being recycled multiple times through the course of the full 60-stage game. Every successive recurrence of a stage sees it populated with more and more powerful robots.

Levels break down into two types: run-and-gun and survival. The former sees the player moving from the left end of the stage to the right. These stages feature frequent “rooms” where the screen is locked in position while hordes of enemies rush in to fight, as well as branching paths and little nooks and crannies with hidden loot crates. Survival stages are just big rooms without the locked screen to hinder movement, relying instead on the borders of the stage. Each survival stage consists of one wave which must be cleared to finish the level (and keep any collected loot), followed by four bonus stages that provide ample opportunity to earn more nuts, loot, and experience points.

The enemy variety is very strong and requires that the player constantly shift their tactics to address new threats. The basic “Chopper” enemy seems easily ignored, even in whole herds, until an elite version with heavy armor manages to hide itself in that crowd and deal out massive damage. Tanks, cannons, and larger robots fire red bullets which can be hit back with Walter’s melee attack and, later, yellow bullets which explode on contact. Large boss enemies eventually become almost common encounters, particularly in the later waves of Survival stages. As every weapon has its own benefits and disadvantages to fighting different types of robots, the strategic possibilities are very deep for what is, in essence, an exercise in twitch reflexes. 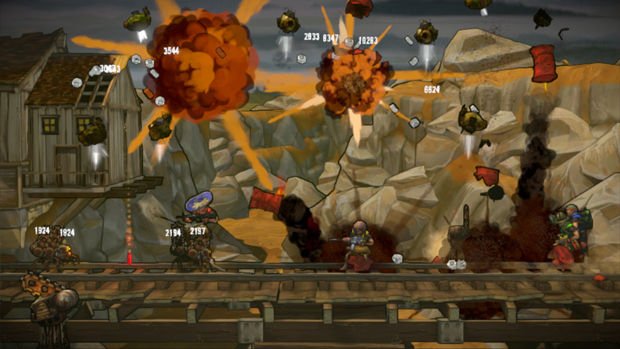 Destroying loot boxes and larger enemies will drop either a piece of equipment or a “nut sack” of 100 bonus nuts (awarded at the end of the stage and not contributing to your final score). As the game progresses, the ratio of loot to nut sacks reaches a point where every time you see loot, there’s a momentary thrill at the prospect of something new to check out and suddenly grabbing that loot item from the environment before it disappears becomes a much more important concern than the seventy or so robots converging on you. Once you’ve collected a loot item and make it to the end of the stage, it becomes unlocked for purchase from the shower in the RV, provided that you’ve collected enough nuts and have reached the experience level necessary to use it.

Finding ways to earn lots of nuts is the key to progress in Shoot Many Robots and the stages are like puzzles in figuring out how to maximize score, which is also tracked on a huge range of leaderboards that breaks down each stage by the number of players involved in the game. Destroying a robot adds to a combo meter at the top of the screen, which decreases as robots are not being destroyed. Filling the meter adds a multiplier to dropped nuts, a process which can be repeated to earn up to five times the normal amount of nuts from killing enemies. It’s possible to keep this combo going almost the entire way through most stages, earning a ton in the process.

Good thing, too. The gear gets as expensive as the statistics for them get ridiculous. Level 50 items, the most powerful in the game, generally cost hundreds of thousands of nuts and can take a long time to earn. Players who don’t want to wait around can just outright buy nuts and even some of the more special equipment in the game from the store using real-world currency (or Microsoft Points).

As the game progresses, it reaches a point of absurd difficulty. Once reaching the “Insane” difficulty stages, it even seems to become too challenging for its own good, as trying to deliver the maximum damage to enemies generally means passing on some other important bonuses like additional beers for healing or greater maximum health. Even the smallest enemies are able to kill prepared players in just a few hits and it seems almost impossible to complete these stages without a weapon which has a knockback feature for crowd control. 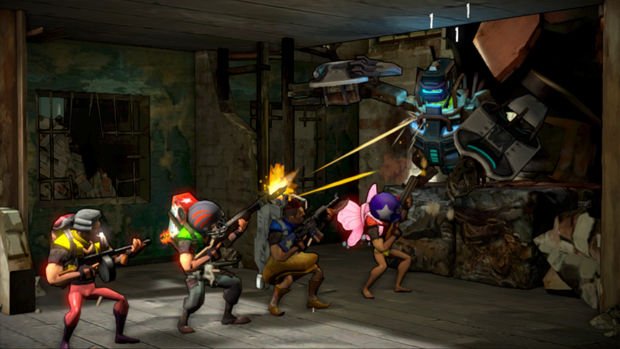 Walter doesn’t have to go it alone. Shoot Many Robots allows for up to four players to play online in conjunction with two-player couch play. So few games offer the ability to both play with someone locally at the same time that you’re playing online, but it’s a perfect fit here. Having additional players around is a double-edged sword, as the extra firepower and the ability to revive fallen teammates comes at a cost of far more robots to kill and stages which would ordinarily be manageable when played solo can suddenly go tits up at a moment’s notice. In addition, the combo meter becomes harder to keep going, making it tougher to rack up those huge quantities of nuts.

There are some other balance issues which can come into play when involving others. The difficulty progression is already rather challenging, meaning that low-level players can find themselves totally outclassed in a multiplayer game. Stages often become a game of supporting the player who can deal out the most damage, keeping them alive and acting as distractions for other enemies. It can lead to some really thrilling moments in gameplay and is no less fun, but could be frustrating for people who will observe how little impact they have when playing only a few stages ahead of where they might be prepared to deal with.

Similarly, higher-end players will find themselves unchallenged by earlier stages, unless they decide to equip themselves more appropriately to the stage and relative power of the other players in the game. The Quick Play multiplayer mode tries to select a level which will be appropriate for the players in the game and while it does a decent enough job, it has its limits. Playing games with randoms online is likely to be a little bit annoying as a result, almost requiring a group of people who don’t mind changing their tactics to find a balance.

Even setting that up is not as small a feat as it sounds, as the accumulation of loot results in having a lot of items to choose from all in one place and swapping can become time-consuming when all anyone really wants to do is play. They’re organized by level in the shower, but it would have been nice to have a little more depth in the menu system to make finding the type of item you want to use a little easier. 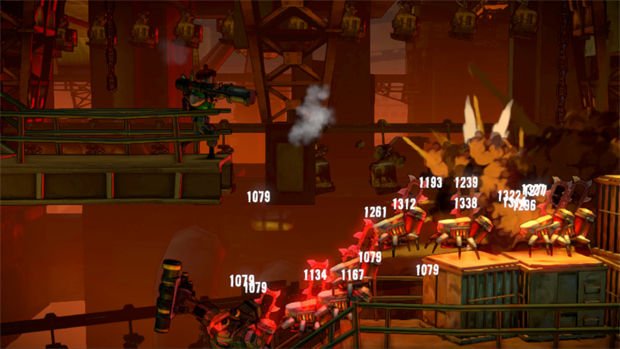 Even if it’s unbalanced, it’s still a lot of fun to play either alone or with friends and there’s a ton of content here for a downloadable game, enough that most people will likely never actually finish it all (either due to quantity or difficulty). Hunting for loot is addictive and the game itself is filled with humor. Much of the loot is silly in nature and every item has a description with some kind of joke or pop culture reference in it (the series of freeze rays contains modified lyrics to “Ice, Ice, Baby,” for example), so there feels like there’s always another neat treasure to uncover, even if it’s an item you’ll never actually use.

Shoot Many Robots succeeds in being highly fun. Apart from some minor annoyances in the inventory system and difficulty balance, its challenge, sense of humor and deep customization options make for a great game with long legs and huge potential for future expansion with DLC. Old school shooter fans should take heed.