I love racing games enough that I’ll enjoy just about any title you stick in front of my face. That said, those games that put forth a good representation of realistic professional racing are usually my preference. Arcade-y racers are always fun, but my heart guides me to ones where I have to think about the weight of a car as I brake, or where a track’s racing lines mean more than the car’s racing stripes. When the game’s sense of realism is just enough to make me fully immersed, I’m in racing heaven. Take that realism overboard, though, and you’ve got a racer that’s less approachable.

EA’s Need for Speed: Shift 2 Unleashed is great in that it speaks to all types of racing game fans. There’s a cool flashiness and high level of approachability that will appeal to casual racing fans, but there’s also deep racing physics that lean more toward the sim side of things than any other game in the franchise. It’s a satisfying, exciting mix that had me squeezing the controller so tight that it now squeaks. EA, you owe me a new PS3 controller.

Read on for our review of Shift 2 Unleashed.

I realize that coming out early with the word ‘sim’ in a review could easily scare off casual racing gamers, which seem to prefer the simpler, arcade-like gameplay of Criterion’s Need for Speed: Hot Pursuit over technical things like lap times, racing lines and suspension tweaks. Don’t run off just yet — I think those people will still enjoy Shift 2 Unleashed, as Slightly Mad Studios’ approach is a bit different. The game’s career mode starts out with shameless raw speed, making no attempts to ease you into things like other sim racers would. You’ll immediately get into a Nissan GT-R and take to the track. In your very first time on the road the world flies by, you graze a wall, spin out and barely make it across the finish line. This sets the pace for Shift 2, which I applaud for being a steady challenge from beginning to end. No apologies are made, and that’s what makes this game a lot of fun.

From that first run with the GT-R, the game will compute what kind of racing settings and assists you’ll need for the rest of the game. You’re free to change these, but I found that what the game gathered from my first run was pretty spot on. From there you’re free to buy your own starter car and jump into any of the available events in Career Mode. You’ll work your way up car classes and event types, slowly unlocking alternate race types. You’ll eventually end up in many of the 100-plus cars, racing in beautifully rendered real-world tracks like Suzuka and Bathurst. You’ll also cruise through Tokyo, Shanghai, London and more. You’ll race to unlock events and other race types, like drifting. Each race will earn you money and experience points (XP). You’ll be able to buy more cars, upgrade, tweak and tune to your heart’s content. 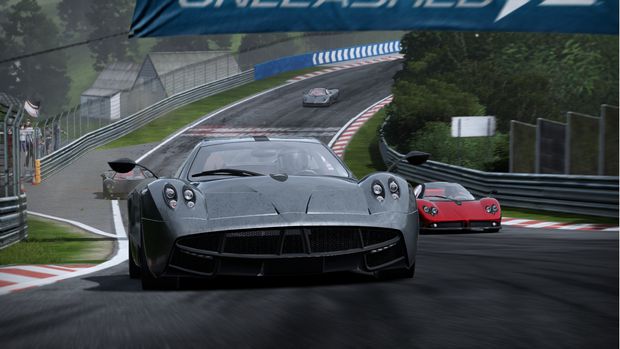 The feel of Shift 2 is exciting. It’s easy to tell that a lot of work went into the feel of the game. Everything is so stylistic and in-your-face that it makes the sim-y guys look a bit tame and boring in comparison. Everything is big and flashy — the menus, cars, cut scenes, tracks and even the sounds. Cars howl, bark and growl on the track, making you feel like you’re being tailed by a rabid pit bull. The sun hits you in your eyes right as you see a massive hairpin turn in the distance. You find yourself squinting and arching your neck to the side, like that would really help. You ease into the turn knowing that the guy on your tail could clip you at any time. You find that you’re squeezing the controller so tight that your hands are white.

But, for as exciting Shift 2 is, there are a few issues that sometimes killed the buzz. Some of the presentation and menu function items are a bit rough around the edges. Loading times sometimes bogged down the responsiveness of menu screens. Other times, I found that there was no audible or visual confirmation for button presses and menu-item selections. There were too many instances where I wondered what the game was doing. Crashes and collisions were another issue for me. While fantastic and flashy, too much time is taken from the race for the sake of this flashiness. It feels like forever before you recover and get back on the road. Unfortunately, with the AI’s tendency to want to clip you during the last lap of a critical race, these big, flashy, slow wrecks are quite annoying. On the same note, while the AI is mostly great with its aggressiveness, sometimes it’s really cheap. 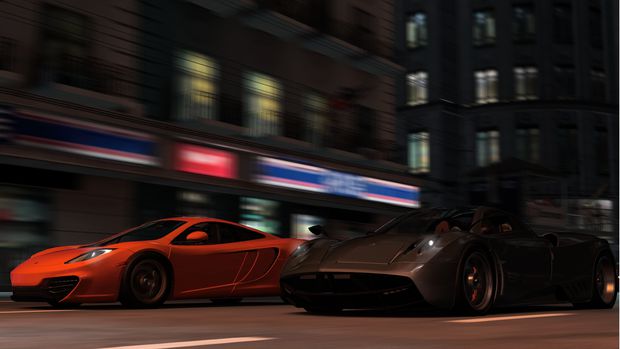 Shift 2 Unleashed looks outstanding. You’re not getting the super-detailed car models or insane frame rates of the Gran Turismo or the Forza series, but they’re still clean and attractive, and you’ll find that they look less like something out of a car brochure and more like something you want to get into and go fast in. The tracks and environments are quite nice — other racer makers could learn a thing or two from Slightly Mad on how to make attractive, inviting stages. The lighting and environmental effects are delicious. Sun flares, reflections and shadows show how much polish was put into the presentation. I thought the headlight work during night driving was particularly good. Seeing the headlights of a car behind me light up the road before me really put on the pressure during races. Oh, and car damage isn’t just a bullet point on the box. In this game it’s real, and it looks awesome, especially when car pieces go flying every which way.

There’s little in the way of learning curve for Shift 2; most gamers will be able start racing immediately. If you’re out to race and have fun for a couple of tracks, you likely won’t find any major issues. If you’re a sim racing fan and like to nitpick, I’m sure you’ll find issue with the steering. The steering makes a lot more sense than it did in the first Shift game, which was really hard to bear during critical turns. They’ve cleaned it up a bit for this title, but I still found that turning into sharper curves still does not feel right. To me it feels like the weight of the car is not correctly figured into the steering, and too often that had me flying off the track when I felt my approach into a turn was good. Similarly, cars feel so light when letting off the throttle that I kept thinking of Nintendo’s F-Zero space racer. 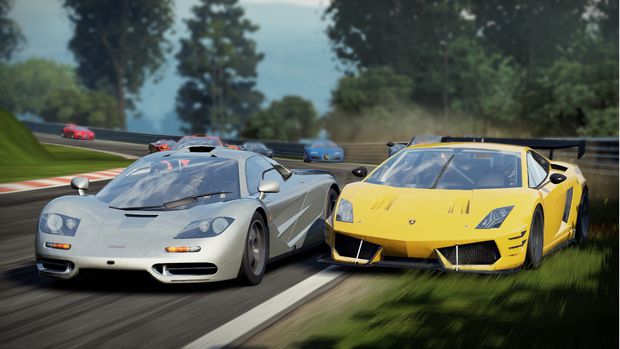 There’s a bit of neat online functionality in Shift 2 for braggers. The game’s Autolog function takes your scores and times and takes them online to leaderboads that can be tracked. You can reference friends’ track times and even rub yours in their faces. You can recommend races and compare times, and the game makes it really easy to do so with cues after each race and automatic connectivity. Sadly, online races aren’t very appealing. Most of my experiences were so laggy and glitchy that they were hard to enjoy. More than once I found myself driving through an opponent’s car.

Shift 2 Unleashed is rare in that it gives you real cars in real locales, but also provides an intensity and excitement that other sim games can’t offer. While the steering isn’t as polished as it could be, you won’t be thinking about that in the tense, white-knuckle, high-speed races that this game offers. Let loose for once: Shift 2 Unleashed is a hell of lot of fun.