Frogwares has changed the formula with mixed results

In Fyodor Dostoyevsky’s weighty novel Crime and Punishment, the central character robs and murders a loan shark and pawn broker but justifies the act in his own mind because he will use the money for good. Doestoyevsky’s anti-hero believes that even murder is justified if some benefit can come of it, that even a wicked act can have some merit. Eventually, besieged by guilt, he confesses to his crime and accepts his punishment.

Throughout Sherlock Holmes: Crimes and Punishments, there are frequent loading screens where you’ll see the titular detective flick through Dostoyevsky’s work and it seems to have had an effect on him. Now Sherlock can decide if a crime truly was justified and how he will punish the guilty. It’s a novel approach that unfortunately only partially works out. 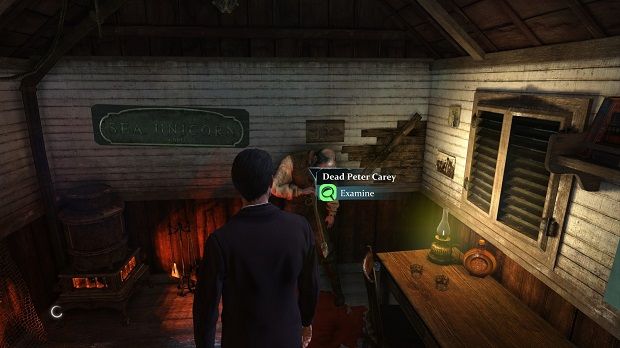 I’ll applaud developer Frogwares for taking a fresh approach to its series of Sherlock Holmes titles. Previous games revolved around individual cases with an over-riding story featuring the likes of criminal masterminds Jack the Ripper and Professor Moriarty. Holmes and Watson would solve a series of mysteries, each feeding into the overall narrative but Frogwares has done away with that approach for Crimes and Punishments.

As the name might suggest, this time there are totally separate cases with their own victims and criminals. While there’s some dealings with Sherlock’s spy-master brother, Mycroft, this has almost no bearing until the very end of the game and doesn’t really affect the individual cases.

Crimes and Punishments is an adventure game so there’s plenty of looking for clues, consulting Holmes’ various reference materials, and conducting scientific tests.

There aren’t inventory-based puzzles that you’d traditionally think of with an adventure game; any items Holmes acquires will be available when needed for their specific use. It’s all practical solutions too — like for instance, when Holmes is looking for a possible bullet hole high up on a darkened wall, you simply combine a pole with a lamp to proceed.

There’s nothing too taxing in that sense, as most of the difficulty comes from various mini-games and challenges which range from mental to dexterity-based. With the former, you’ll have Holmes picking locks or doing experiments on hair and metal samples. The other type of challenges are a bit rarer, like beating a sailor in an arm-wrestling contest or crossing a rope bridge.

These can be skipped at no real penalty to the player (aside from missing out on achievements) so while it’s welcome that you can bypass the lock-picking mini-game after the seventh time you’ve seen it, there does feel like an absence of challenge. This isn’t much of a change from the last Sherlock Holmes title but it highlights the focus on the newer elements of the game. 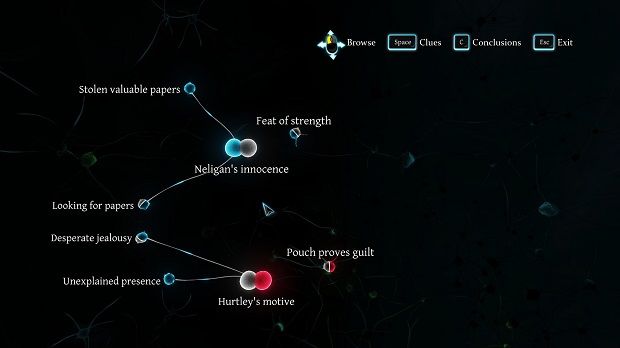 The big new feature here is that there isn’t just one suspicious party in each case and you have the ability to accuse whichever individual you feel the clues point towards. Your conclusions are formed from interpreting clues that you find pertaining to the crime in question and interpreting them in such a way that a motive and opportunity become clear.

First, you’ll have to link facts together to form a node in Holmes’ brain map (I’ve made up that name). Most nodes will have two possible interpretations, like either a break-in was staged or there was a real robbery. Mapping out a crime isn’t as elegant as the interface may make it look; you can click randomly on nodes simply to get the conclusions you want and it was even possible for me to condemn a completely innocent person all because I missed a single clue.

In each of the game’s six cases, it’s possible to point the finger of blame on incorrect parties  — I finished with four cases solved correctly and two incorrectly — but at least you’re able to absolve the guilty if you feel they were justified in their actions. Crimes and Punishments unfortunately makes most of its murder victims fairly unlikable so it often feels like absolving their murderer is the natural choice.

Whether they be murderers, bullies, wife-beaters, or worse, it’s hard not to find sympathy for their possible killer. This undermines the weight of the choice you have to make by leaning on the side of the accused. Still, the game doesn’t punish you for being wrong — not directly anyway. Holmes will receive correspondence at a later date confirming if his decision was in any way correct. 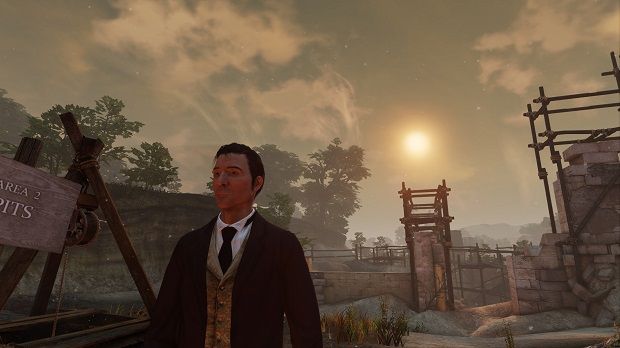 Crimes and Punishments looks great. Most outdoor environments are stunningly realized, especially locations like the archaeological dig site. The character models too are impressive but suffer from not having their lips move in sync with the dialogue. Kerry Shale and Nick Brimble do a fine job in voicing Holmes and Watson respectively as they have done in previous games and the standard of voice acting for the secondary characters is better than expected.

In motion, there was a lot of screen tearing which after experimenting with the video settings still failed to go away. Loading times were hefty as well, especially on my PC which is equipped with plenty of RAM and an SSD. This wouldn’t be such a problem if the game didn’t insist on moving you from location to location, often on a whim.

At one point, I was told I needed to retrieve Holmes’ faithful bloodhound Toby from Baker Street. So, after selecting Holmes’ domicile from the map, there was a loading screen, I arrived at Baker street, clicked on Toby, and returned to the crime scene after another loading screen. It took two minutes to do what frankly should have taken just a few seconds.

In most videogames that portray detective work, you’re still guided on a linear path that has you eventually finger the right perp to continue the story. L.A. Noire came close to having actual deduction and investigations but you would still have to repeat cases where you charged an innocent party. Westwood’s 1997 Blade Runner title lead the player on fairly fixed path but kept things fresh by randomizing whether certain characters were replicants. 2014’s lo-fi adventure game Noir Syndrome has a randomized set of characters, murders and clues each time you play and I’ve found my success rate is 50/50 whether I find the guilty party.

Sherlock Holmes: Crimes and Punishments finds itself in a tricky predicament in the relationship between the great detective and the player; none of us really possess the razor-sharp deductive skills that Holmes is blessed with, so as a player controlling Holmes, surely it’s logical that the wrong person is blamed for a crime. But are we playing a Sherlock Holmes game to make our own deductions and mistakes or are we playing to see the workings of the great detective’s mind? 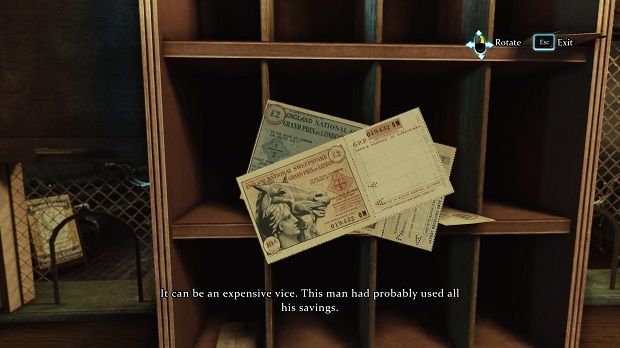 Controlling the great detective is sometimes frustrating; he still makes leaps in understanding that’s beyond the average person. At the same time, that’s what makes him a compelling character. By allowing the player to make their own conclusions about who they think is behind a gruesome crime, Frogwares has introduced an element of doubt that I haven’t seen in a detective game for some time.

At the end of a case, the player is given a rating, either highlighting their compassion or their steely sense of justice. They’re also given a breakdown as to how other players resolved the case and the option to find out if they identified the right suspect. Your enjoyment of Sherlock Holmes: Crimes and Punishments will depend on whether you want to be guided on a series of baffling murders or have the great detective be fallible.