It’s no small secret that I’m in love with the Shantae series. I was immediately taken in by the magnetic characters, brilliant music and retro adventure action. The WayForward developed franchise marries the gameplay of classic platformers with contemporary sounds, gorgeous visuals and sharp wit.

But is there still mileage left in the 2016 adventure? Are we still Dancing Through the Danger? or just retreading through worn ground? Let’s rub the lamp one last time and find out. 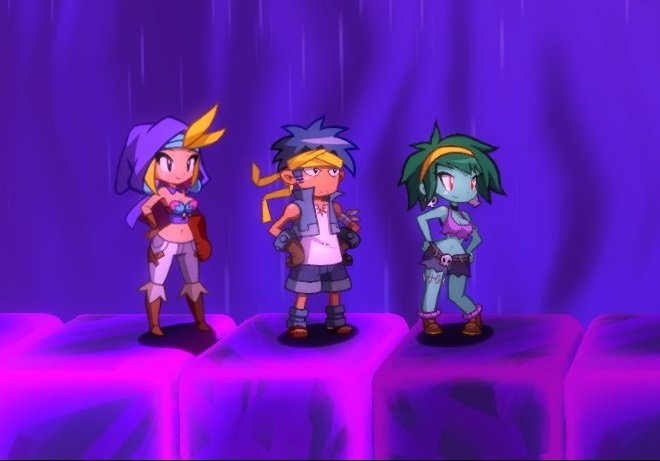 Friends to the End is set during the final chapter of the Half-Genie Hero narrative. Having been zapped by a machine that has inverted her magic, Shantae has become the cruel and malicious Nega-Shantae. Unwittingly attempting to destroy Scuttle Town with her evil powers proves too much for the young girl, and she collapses, creating a vortex of dark magic around her.

This is where her friends come in, as Bolo, Rotty and Sky leap bravely into the vortex — essentially Shantae’s brain — in order to save their pal from a fate worse than death. Once inside her head, the gang must travel through their Shantae’s memories in hopes to restore their beloved friend to her happy-go-lucky self.

While they have no magic powers, the challenge to save Shantae can be overcome by using the terrific trio’s individual skills. Bolo has a grappling claw, allowing him to Simon Belmont over crevasses. Sky can send out attack birds, create platforms in mid-air, and glide to safety with the aid of her sidekick, Wrench. Finally, zombie-cutie Rottytops can teleport by chucking her own head into hard-to-reach places and even eat brains to restore health!

The game has a leveling system, which boosts the character’s moves as you gather gems, but nerfs them again should you take damage. Frankly, it feels half-baked and really arbitrary, and becomes a nuisance should you take damage during a boss fight, with your respective character getting weaker when you needed them at their strongest. 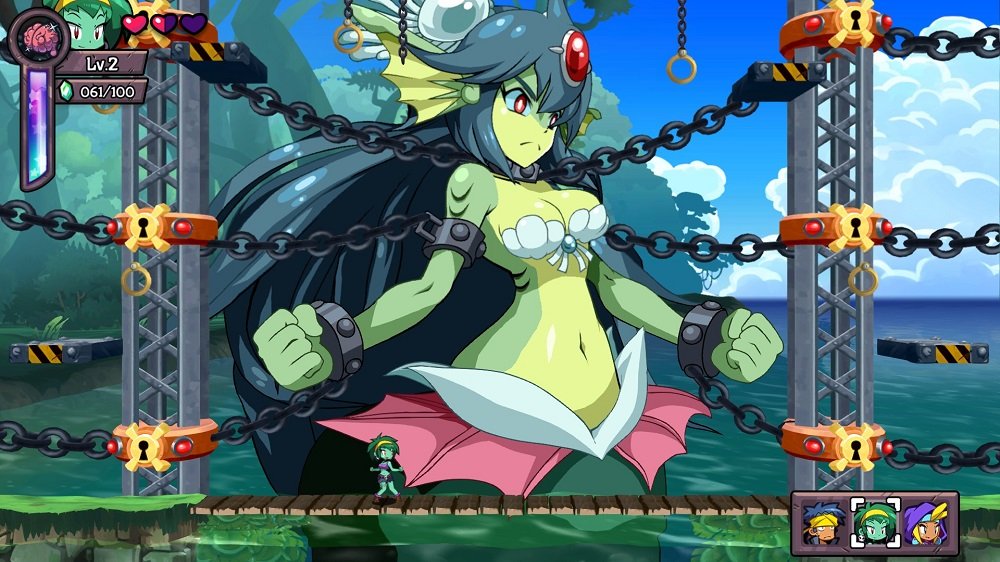 Friends to the End obviously looks marvelous and sounds fantastic. The new character animations are absolutely delightful, particularly Rotty’s head-teleport. Kudos to the animation team. The simplistic narrative still manages to capture the gleefully sardonic Shantae writing style. It’s a cute story, with a sweet message and a fair few laughs. Besides, who doesn’t want to see Giga Mermaid again?

Shantae fans will have likely played through Half-Genie Hero multiple times by now. First on release, then perhaps through New Game Plus. Then there was the “Hardcore Mode” update. More recently, they may have revisited it in the Risky Boots DLC, possibly even numerous times to achieve 100% completion, or the speed run achievements.

Now, die-hard fans are being asked to put down a few more bucks and run through it again, which leads to the unavoidable issue with Friends to the End: It’s just one revisit too many. 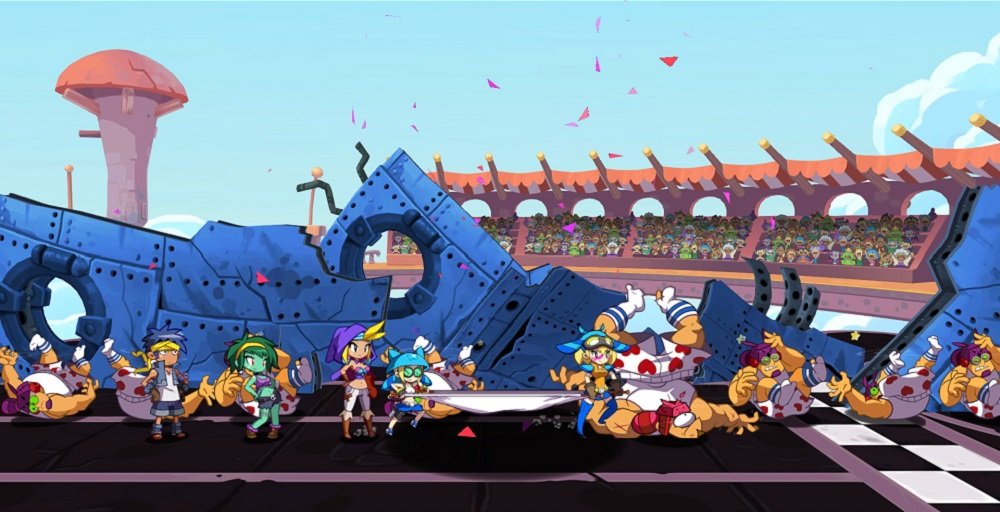 I was willing to re-run Half-Genie Hero. I love the game. But I found, as early as the second stage, that I was tuning out hard as the initial novelty of the new characters wore off. I was fighting the Tinkersub… again, going through the Mermaid factory… again, sliding down the barrel ramp… well, you get the idea.

While Half-Genie Hero is a great title, you can only revisit the same stages so often. It’s likely that fans not only know the game inside-out, but have already paid for (and played through) a revisit just four months ago. While there’s no doubt that the opportunity to play as three great characters is impossible to pass up, the realisation that their playable introduction has been squandered in another tweaked re-run is somewhat disappointing.

In my Pirate Queen’s Quest review, I commented that the expansion was over quickly, and incurred strong Deja Vu. Well, Friends to the End was over quicker still, and now the Deja Vu has just become repetition. Even WayForward seem to know this, swapping out some of the stage’s original themes with tunes from previous Shantae games, perhaps aware that staleness is setting in. 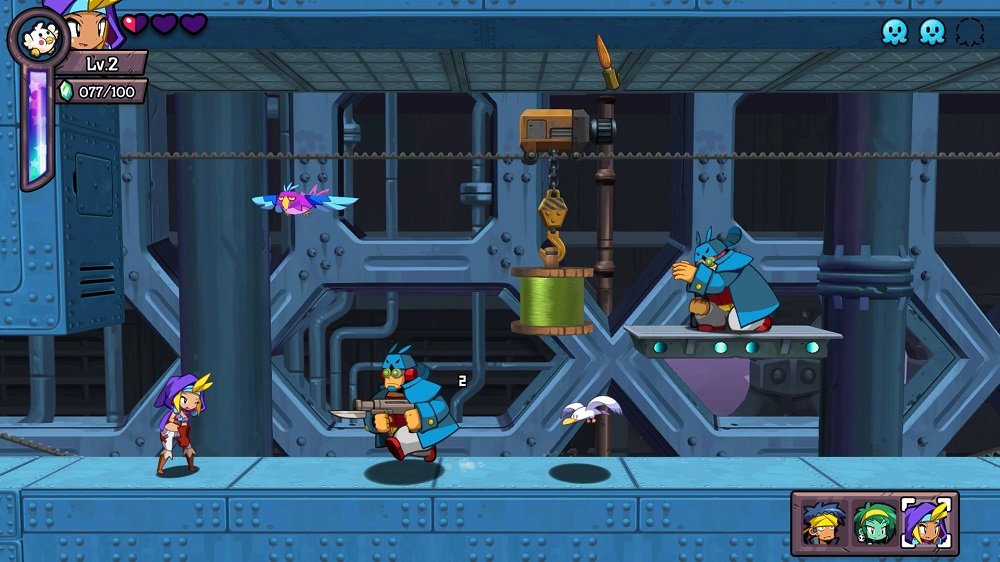 It isn’t that the concept of Friends to the End is bad, the characters are great, the new abilities are fun, the price is low, the game it’s based upon is excellent. But these great protagonists, new mechanics and unique weapons should be being implemented into the next game, not awkwardly crowbarred into this one. It’s simply time to move on, Half-Genie Hero has granted all of its wishes.

Shantae is an amazing series which I dearly, truly love. It makes me very happy. But I have to go with my head, not my heart, and recommend that you wait for Shantae: Half-Genie Hero – Ultimate Edition. You’ll not only get the game’s great main adventure, but these mini-expansions are much better suited to the role of inclusive extras. There just isn’t enough novelty, length or content on offer to satisfy as standalone purchases… Just don’t tell Shantae I said that…