I whip my hair back and forth

WayForward may be one of the most underrated developers in the games industry. The studio mostly does contract work, frequently laboring on licensed projects like Adventure Time, though it’s also worked on sequels and remakes like Contra 4, Double Dragon Neon, and Ducktales: Remastered. While all of these are extremely solid games, I suspect that WayForward does this contract work mostly to pay the bills for the games they really want to make, including the Mighty series and Shantae.

Shantae has starred in four platformers now, starting on the Game Boy Color way back in 2002. It’s been her misfortune to close down multiple systems, and since her games always seem to come at the tail end of a system’s life, they tend to be overlooked by the public at large. It’s a damn shame because they’re consistently entertaining, and the artwork and designs are top notch. Shantae: 1/2 Genie Hero is the first game in the series not designed for a handheld system, and the first to go with HD graphics rather than pixel art for the characters and backgrounds. It’s hard to overstate how unbelievably gorgeous this game looks, but like your mom told you, looks aren’t everything. 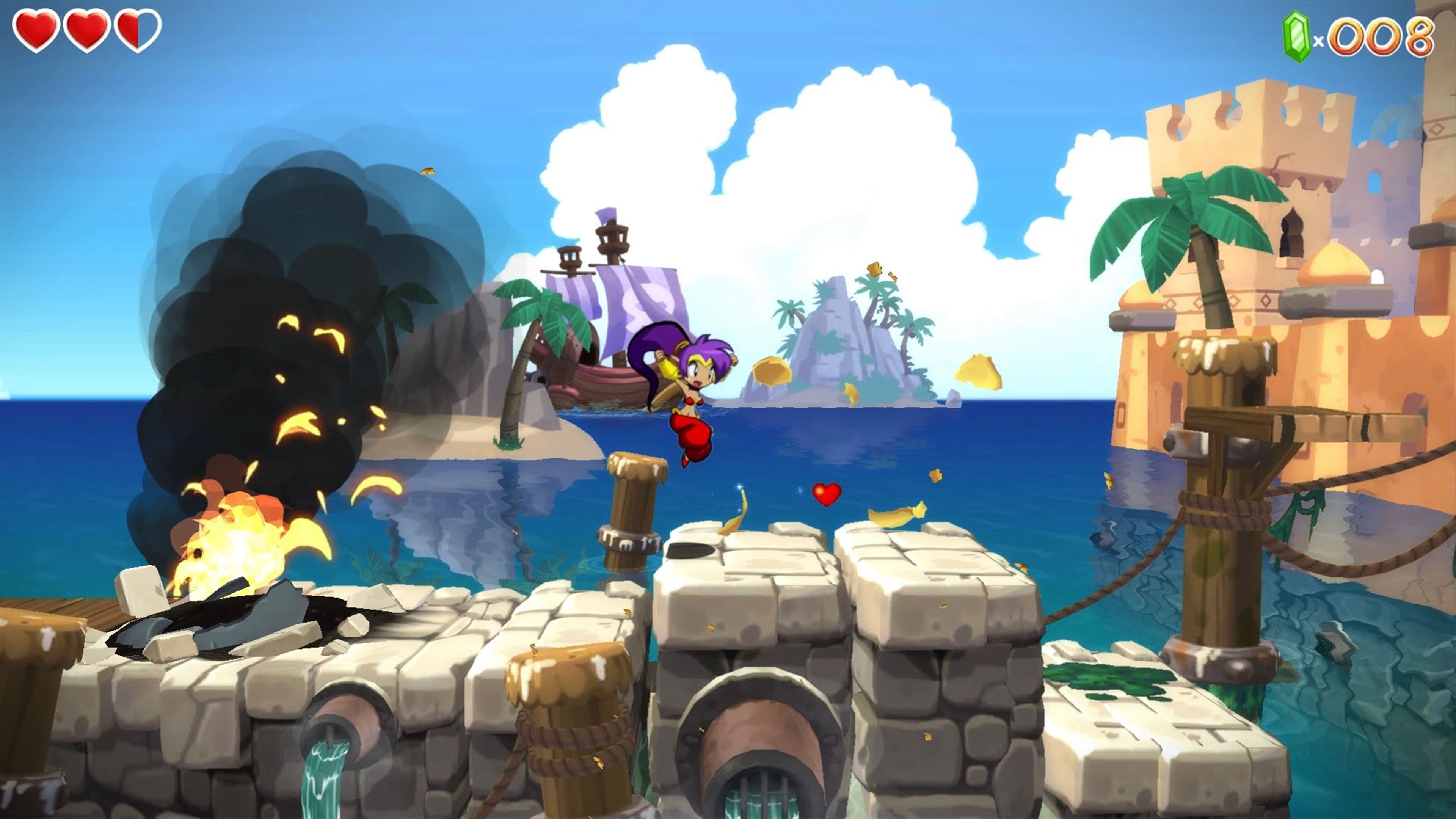 Shantae: 1/2 Genie Hero is either a sequel, a remake of the original GameBoy Color game, or a soft reboot; it’s hard to tell, but it doesn’t really matter. All Shantae games tell pretty much the same story anyway. Shantae is the guardian of Scuttle town and is always on call in case the town is attacked by pirates or other dark forces. She is a half-genie, and though she’s never seen either of her parents, she knows that her mother lives in the Genie Realm, which is also the source of Shantae’s powers.

She can damage enemies with her whiplike ponytail, and can belly dance to transform into a variety of different creatures. The transformations allow her to explore new parts of the world, and she can find various upgrades for each form that help unlock more secrets. It’s easy to use these transformations, and a lot of thought went into their animation — even when Shantae turns into a hideous spider, it is a CUTE hideous spider.

There are five huge levels to explore, plus a hub world and a final boss level. Each of the five main stages is jam packed with secrets and unlockables to reveal. You’ll return to each level multiple times after gaining a new ability or transformation, and fortunately the game lets you know how many secrets you have left to discover on the world map before diving in.

Each of the stages has a vastly different theme, and the level design is informed by the story. For example, in the water level, you see that young girls are passing from foreground to background while moving through complicated machinery intended to transform them into counterfeit mermaids. Later on there’s a stage that begins with a magic carpet race and leads to a series of pirate airships. It’s safe to say that there’s going to be something here you haven’t seen before. Beating the bosses can vastly change the look and feel of these levels, so it’s not such a chore to backtrack. Once you’ve beaten a level you can use the optional Warp Dance to move between different sections so you don’t have to play the whole thing every time you want to go exploring.

I’m glad this is an option, because unfortunately there are some sections that you probably won’t want to replay. WayForward frequently combines old-school design with modern technology, but in this case they may have gone a little too far. I ran into several sections where progression was blocked until I memorized a sequence of obstacles, and the checkpoints in these sequences felt like they were just slightly too far apart. 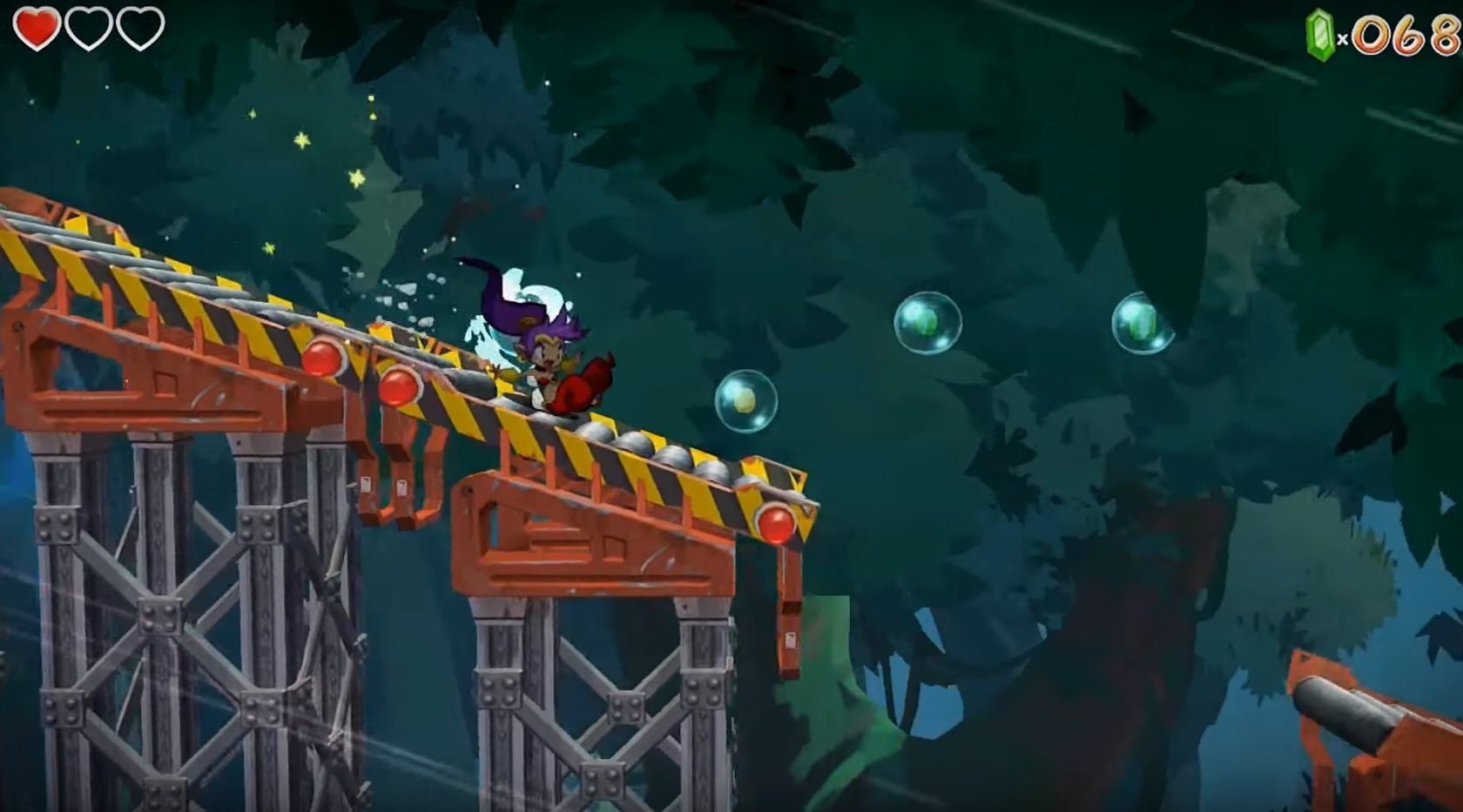 An early example has Shantae sliding down an autoscrolling ramp while avoiding pits and dodging enemies and barrels. Dying or falling here forces a restart, and since it’s very early on you won’t have much of a life bar.  It reminded me of the Turbo Tunnel in Battletoads, where your only hope of survival is rote memorization of the layout. I probably restarted this area a dozen times before realizing that the fruit I was collecting on the way down could be used from my inventory to restore some health.There are more sections like this, and others that reminded me of the disappearing block challenges from early Mega Man games. These show you where the next blocks will appear so they aren’t unfair, but they aren’t particularly fun, either.

Still another section tasks Shantae with climbing a long tunnel as an enormous sandworm devours it from the bottom up, and if you mess up more than once, you have to start over from the beginning. Since this is the first time you’ll be navigating this area, you probably won’t make it the first few times you try. A final frustration involved a long maze that has to be navigated with the mouse form, and is far too easy to fall out of.

When you fall out, (Surprise!) you have to climb back up and start the maze from the beginning. I don’t have a problem with hard games, but these sections felt like they were wasting my time. After finishing each of them once I tried to avoid going back until I could return with some other tool that made repeating them unnecessary. 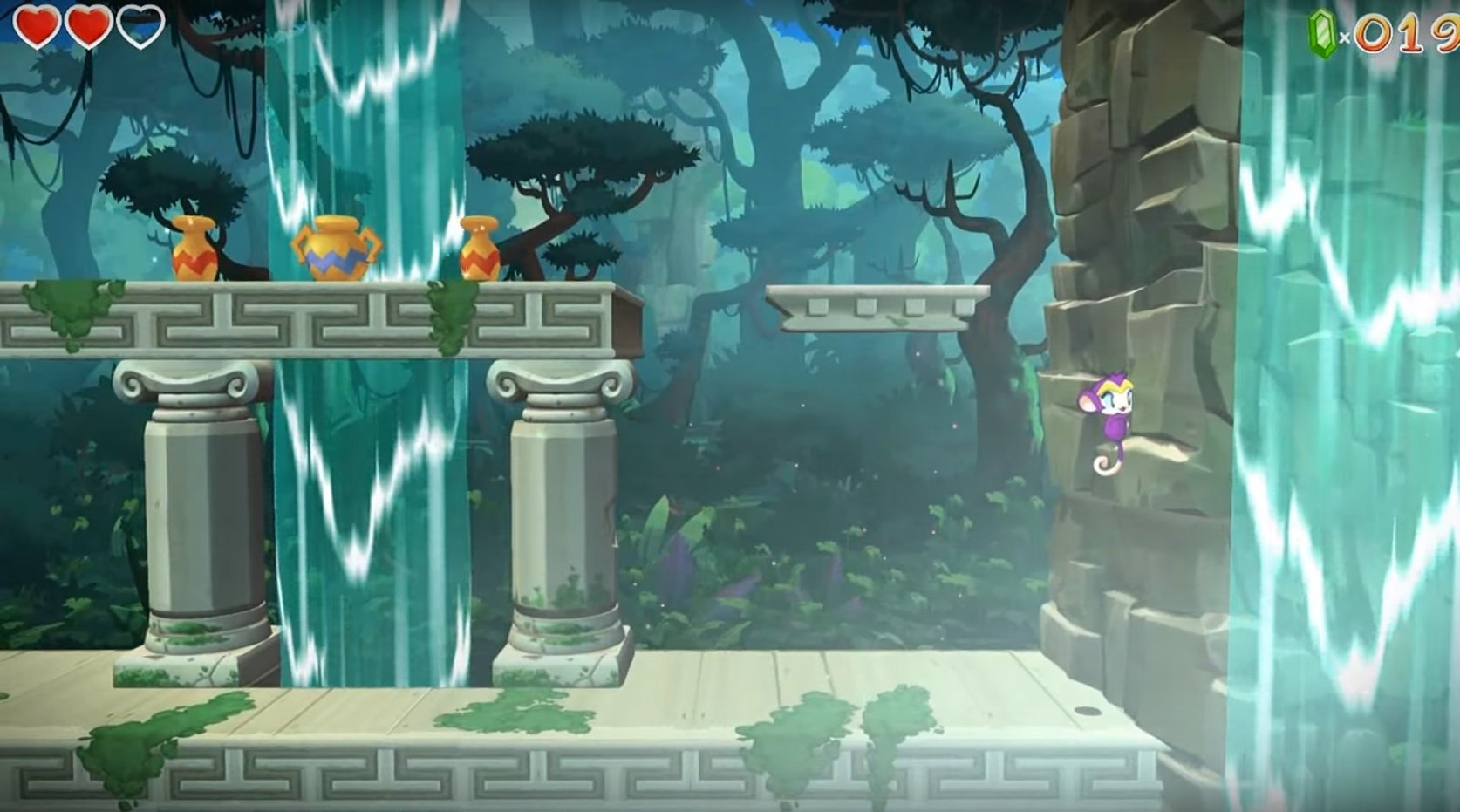 Fortunately, the game’s art and charm are more than enough to counteract the frustration.There’s plenty of humor, and the characters are all self-aware and likable. When I first started playing I thought the animation looked like something from a Flash game, but after looking a little more closely I realized that all of the characters were actually hand drawn vector art moving against 2.5D foregrounds and backgrounds. Bosses in particular are awe-inspiring, and creatures like the Mermaid Queen seen in the header image each have hundreds of moving parts that make them feel alive. Seeing 1/2 Genie Hero in motion on a nice TV is stunning, and the opening stage kicks things off right by featuring a theme song for Shantae, sung in-character by her voice actress, Cristina Vee.

The soundtrack is worth calling out. Jake Kaufman’s score is predictably excellent, with tunes that call back to the theme song frequently. Each stage has multiple tracks devoted to it, and these maintain a mild Middle-Eastern feel. They range in tone from synth-heavy to disco, and a later stage has music that you could drop right into a Castlevania game. The voiceovers aren’t quite as good as the music. The Kickstarter didn’t raise enough to cover full voice work, so most interactions are handled through text boxes. Infrequently, however, Shantae will speak the same line that shows up on screen. It’s just inconsistent enough to be slightly jarring when it happens.

I played the Wii U version for this review, and I suspect that 1/2 Genie Hero may well be one of the last releases on the platform. Unfortunately, none of the system’s features were put to particular use. The game displays on the GamePad and the TV simultaneously, but none of the GamePad’s touch functions work, so everything must be done with the buttons. What’s more, there’s no way to turn off the GamePad screen, so even if you’re playing with a Wii U Pro controller, the second screen is always on.

This is a step back from the Wii U version of Shantae and the Pirate’s Curse, which allowed the player to use items and check the map using the touch screen on the GamePad. That’s another thing — despite the clear influences from Metroid and Castlevania, there’s no map function in 1/2 Genie Hero, so you’d better have a good memory. I’d have also appreciated the ability to remap the buttons; the layout was fine, but using B to confirm things just felt weird. 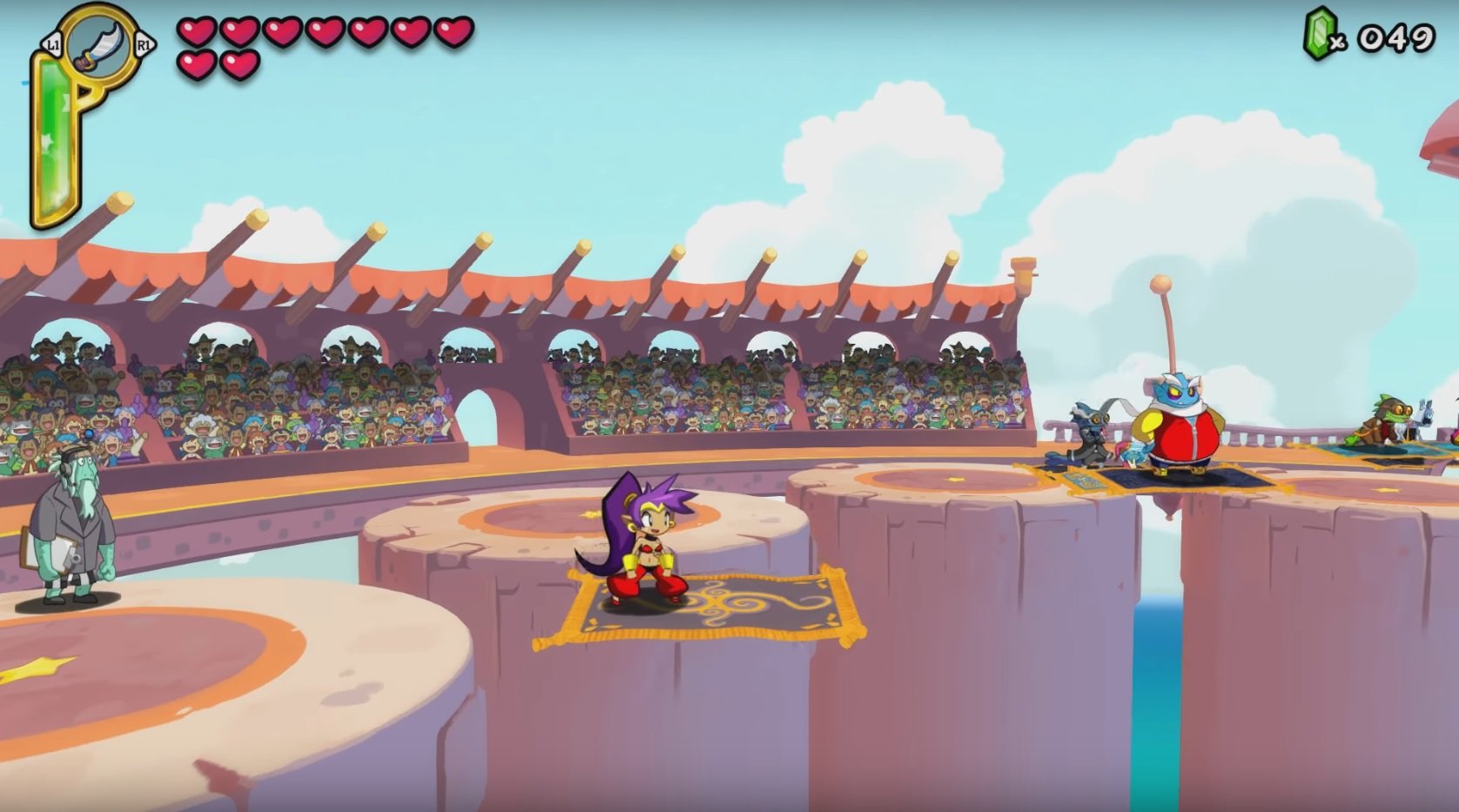 It’s worth mentioning that there’s free DLC on the way that will include the ability to play as Shantae‘s antagonist, Risky Boots. At the time of the review, this option was not available, although a new game+ mode did open up once I completed the story. My playthrough took a little over 7 hours to collect 100% of the items, though doing this isn’t necessary and a speedrun could probably be completed in a few hours.

Despite all my nitpicks, I enjoyed my time with Shantae: 1/2 Genie Hero. There’s no denying it’s one of the most beautiful 2D games I’ve ever seen, and it might have taken the title easily if Owlboy hadn’t come out just a couple of months ago. It ran flawlessly on the Wii U, so I have no doubt it’ll look just as breathtaking on more modern consoles and PCs. There’s a lot to like here, and I hope WayForward gets to keep making Shantae games. As long as they do, I’ll keep playing them.