Shank 2 continues the tale of a man named Shank by providing more killing, more death, and more over-the-top gore that was a staple of the original title. At its core, however, is a side-scrolling brawler reminiscent of old arcade classics in which addictive gameplay is seasoned liberally with brutal difficulty to keep kids feeding quarters into the machines.

This is no longer the age of arcades, yet punishing challenge remains a main ingredient in this type of game. Of course, there’s no point in having challenge without making progress, so Klei Entertainment has tried to implement some changes to the formula. 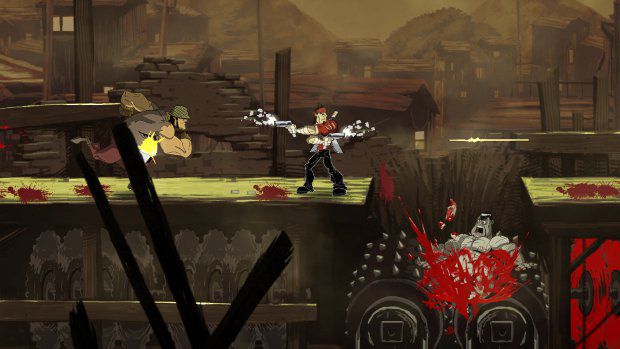 Shank is an angry man who kills lots of things using varied and interesting methods. He is also a man who dies a lot. There doesn’t need to be a reason for Shank to kill. The developers could have said someone sneezed on the hero, which sent him into a blind rage of murder and death. They didn’t, however, and the result is a bit of back story to flesh out the character. Mostly though, this game is about killing lots of dudes.

To aid in the slaughter, you are given three attack types — light, heavy, and ranged — as well as explosives. Each weapon also carries certain bonuses, such as the sledgehammer, which deals 25% more damage to large enemies and 50% more damage to shielded enemies, or the pistols, which will deal an additional 20% damage to small foes.

On top of that, players can wield the weapons of those they’ve slain. If you want to kill dudes with a shovel or a large fish, that is an option. In case that isn’t enough variety, there are several environmental kills as well. You can drop boats or crates on enemies, throw boxes of knives or blocks of ice, open up the floor so foes fall into giant grinding cogs or saws… the list goes on. 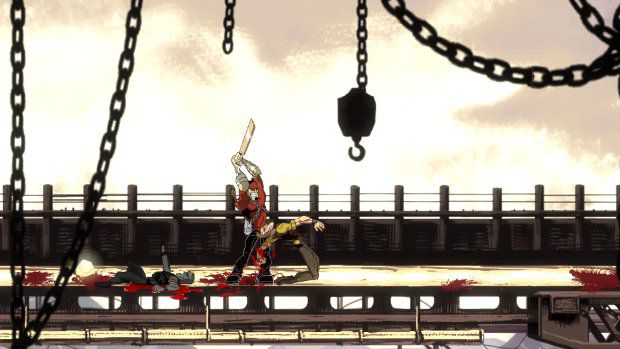 It is entirely possible to beat the game using only your basic abilities, which would be one way to challenge yourself. Using the additional weapons laying about will help, especially in areas where the difficulty level spikes ridiculously. None of the fights are easy per se, but there will be sections when it gets downright aggravating. At one point early in the game, you are shown how to grab and throw enemies. Following this, a number of more challenging enemies are sent your way, so not only are you forced to learn how to grab and throw, you also have to master it quickly or die. All while avoiding the instant-death hole in the floor, by the way.

You can also make fights less intense by utilizing counter attacks, which are triggered by grabbing foes when a big red exclamation mark appears over their head. Of course, this is often easier said than done. When you only have to deal with one or two guys, it’s a lot easier to grab the right guy than when you are facing six or seven. There was more than one time when, while trying to perform a counter, the wrong guy was grabbed and then the rest of the enemies proceeded to destroy you.

If killing and dying alone isn’t enough for you, there is also a two-player survival mode, which replaces the co-op mode of the original Shank and which may be the best part of the game. Instead of playing through main levels with a friend, you are now tasked with surviving wave after wave of enemies who are trying not only to kill you but also to blow up three clusters of supplies. Between waves, you are given the chance to purchase items like health drinks, decoys, or heavy weapons, and the more waves you survive, the more items that become available. Each of the three survival levels also have unique items, such as harpoon guns or trap doors. 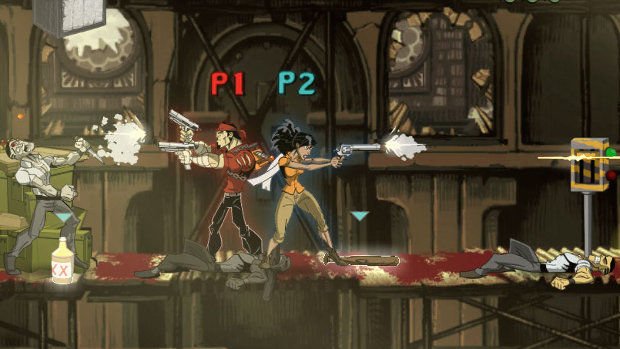 Should you die during survival, your partner can revive you, so the only way to lose is if both of you die or if all three supply caches are destroyed. The only enemies that can blow up the supplies are little demolitions experts who will set charges. You’ve only got a few seconds to attack and/or kill the demo men before they set their bombs, and a few seconds to disarm the bombs if they’ve already been set, all while contending with the regular enemies as well.

As far as the story goes, it’s pretty basic — this isn’t an RPG, after all. Shank has to save someone he cares about while taking revenge on the ones who did the kidnapping. This brings us to the cutscenes, which are incredibly entertaining and over-the-top. In comic book/grindhouse-style animations, Shank causes even more devastation and destruction, all of which is rather satisfying and amusing. The same amount of detail in the cutscenes can be found in each and every chapter of the game, from the level design to the different enemies in each level. 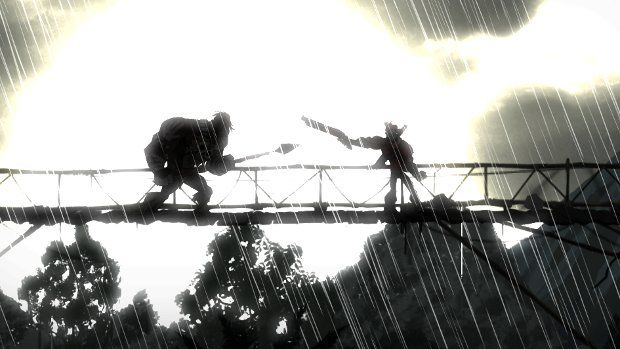 It’s only a shame that some of the fights are so frustratingly difficult. While one should expect some tough encounters, there should also be some balance, yet that balance was sorely lacking at times. Most of the areas were not incredibly hard, then there would suddenly be a near-impossible section that took quite a few tries, only to revert to far less challenging fights. These sections were even more brutal than the bosses, which seems a bit backward. More than once, I found myself stuck midway through a level, retrying the same goon battle over and over, only to beat the boss in one or two attempts.

Another fly in the proverbial soup was the controls. To be blunt, PC controls suck. Hard. If you have a controller but want to play on the PC, fine. Be warned, however, that things are going to get hairy when you’re trying to play with a mouse and keyboard. It is possible to reassign key functions in the options, but even doing that, the mouse and keyboard felt so awkward that playing with the controller became necessary. Once the switch was made, things felt a lot easier, but there were still occasional issues. The biggest one is Shank’s random turning in the wrong direction during attacks. In a slower-paced game, this wouldn’t be an issue, but when you’re in the middle of a combo or a brawl with three or four dudes, death happens — needless death, the most aggravating kind.

Also, once you’ve played through the campaign, there isn’t much reason to go back and play again aside from completing objectives to unlock new skins and costumes, and even most of those can be done in survival mode. 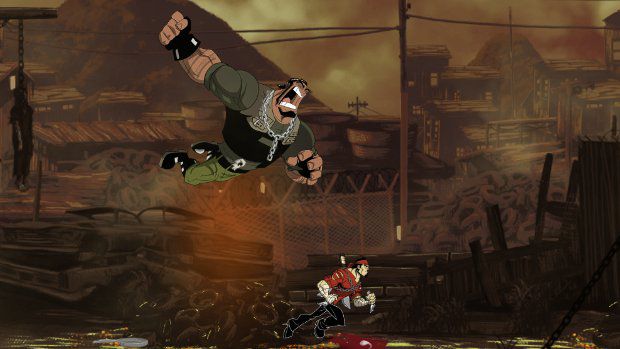 The B-Movie theatrics are great but can become repetitive during the fights. The challenging gameplay is fun, but the fact that mid-level encounters are more difficult than bosses can leave a feeling of frustration instead of triumph. The only place where this doesn’t apply is the ability to use items to kill, since they are varied and spaced well enough so as not to become boring. For what the game costs, though, it’s worth a look if you enjoy brawlers. For the game’s faults, the survival mode can be a lot of fun, plus the absurd destruction never gets old.

All in all, Shank 2 can be summed up as “fine.” It isn’t going to revolutionize brawlers or bring anything truly unique to the table, but it isn’t a bad game either. Some of the strongest points also seem to be the weakest, but there are some places where they get done right.