The Serious Sam franchise is known for being insane, over-the-top, funny, and an overall satisfying experience. Though each game in the core series is a first-person shooter, developer Mommy’s Best Games has taken the franchise in a different direction, turning it into a platformer and dual-joystick shooter hybrid with a heavy emphasis on chaos. A PC version was released in 2011, but this new XXL version comes with more content, including local cooperative play.

It’s definitely over-the-top, as evidenced by the ability to literally stack guns on top of each other, and feels like a solid Serious Sam game. It is by no means a groundbreaking title, but it is good, old-fashioned nonsense that may or may not elicit a chuckle from time to time. Probably not, though. 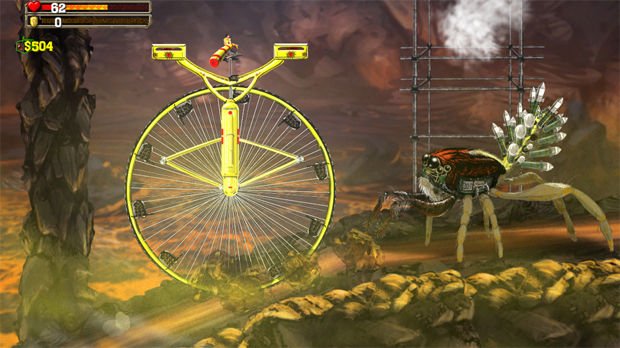 The plot is far from important, but there are enough small cutscenes to remind you that it does, in fact, exist. Sam is traveling into different time periods in order to chase after Mental and his endless horde of enemies. There’s something about crystals and sometimes there is dialogue, but it’s really just there to give the player some type of thin motivation to keep moving on from level to level for the duration of the four-to-five-hour campaign.

The humor is very hit or miss, though it misses way more often. Probably not even enough hits to sink a battleship, really. The humor seems derivative of the type of humor that is found on late night/early morning [adult swim] cartoons, but never quite reaches the same level of hilarity. The story isn’t strong, though it hardly detracts from the game. In fact, it falls in line pretty well with the narrative expectations of a Serious Sam game. It’s not intrusive, has some okay one-liners, and there are crude jokes thrown in for good measure.

The campaign can be played in local multiplayer this time around and both characters are able to use the same gunstacks, though they share the same ammo pool. It’s a nice addition, even if the secondary character, Huff, is incredibly annoying.

The game controls like a platformer mixed with a dual-stick shooter. Aiming is done with the right analog stick while movement is controlled with the left. Movement happens on a 2D plane, just like a platformer, and occasionally requires somewhat accurate jumps. Sam also has access to a jump pad that he can place anywhere he wishes, although only one may be out at a time. Usually this will be used for jumps that are just a bit too high for the normal jump, but some of the secrets require a good amount of dexterity and skill with jump pad placement which makes its use more interesting.

Shooting is the heart and soul of any Serious Sam game, and Double D XXL ramps up the gunplay by allowing guns to be stacked on top of one another, all to be fired at a single pull of the trigger. Stacking two guns requires a connecting arm, often found in secret areas around the levels. If you’re keen on exploring most nooks and crannies, there will be plenty of connector arms for your gunstacking needs.

The gunstacking isn’t as mindless as it may seem at first glance. Stacking specific guns higher or lower on the chain will maximize killing efficiency. For example, a chainsaw obviously goes towards the bottom, since that is where it will come in contact with the most enemies. Guns can also be upgraded to some seriously bizarre variants. For example, my favorite gunstack is a bee-shooting shotgun on top of a boomerang-chainsaw.

In addition to the campaign mode, Serious Sam Double D XXL has challenge and head-to-head modes. The head-to-head mode is a throwaway distraction, pitting one player against the other in a fight to the death. The challenge modes are a bit more interesting, allowing the player to only use specific gunstacks to complete the challenge. They aren’t too difficult but act as a decent distraction from the campaign. 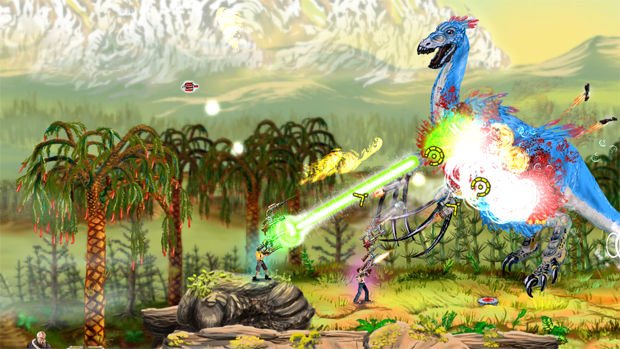 The game does get rather mindless at times, especially on the Normal difficulty setting, as ammo never seems to be in short supply. It tends to become a game about maneuvering the terrain as you hold down the trigger and aim in the general direction of the enemies. The higher difficulties definitely result in more deaths, and likewise a less enjoyable experience overall.

While there are plenty of checkpoints throughout each level, respawning after a death is quite slow. The load time after each death can take about 30 seconds, which becomes very annoying in instant-death platforming scenarios and some of the harder enemy encounters, which will likely take a handful of attempts to complete.

There is also significant slowdown when activating a checkpoint. For a brief moment, the framerate drops to an unbearable level. Most of the time, it hardly matters as there are no enemies around, but that does not excuse the poor performance. When there are enemies around, it becomes even more frustrating, resulting in a struggle against the game’s performance instead of the on-screen enemies.

Speaking of enemies on the screen, there is almost always a constant flood of them. The game seems to think “harder” means “more enemies coming your way” instead of any meaningful difficulty curve. There are new enemies introduced at a constant rate throughout, but none of their behaviors are all that interesting. The framerate also tends to dip towards the end of the game when there are countless enemies on the screen at once. 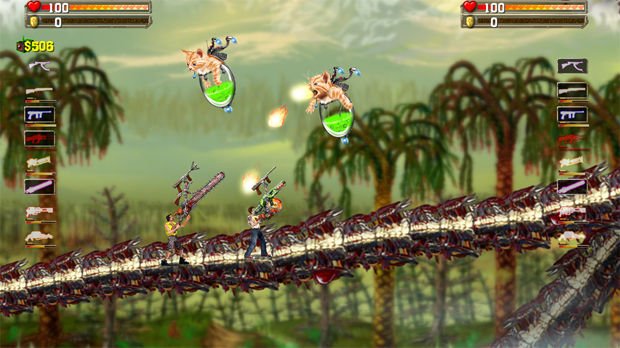 The aesthetic of Serious Sam Double D XXL isn’t anything great, bordering on generic. All of the classic enemies from the core games are present, which really makes it feel like a Serious Sam game. Even the new enemies are absurd enough to fit right in with the existing world. The music is also generic, with background music that does its best to sound as epic as possible to accompany the chaotic action on-screen.

Serious Sam Double D XXL isn’t going to blow anyone away, but it can make for an entertaining afternoon, with or without a buddy. It does a good job of capturing what the Serious Sam games are all about while at the same time changing the type of gameplay typical of the series.

It is far from perfect, given the framerate drops and some uninteresting sections which make it feel as if the game is on autopilot. It is a decent amount of unbridled chaos with some absurd enemy design and a solid weapon mechanic. While not the most innovative or engaging title, it is likely to provide enough entertainment for Serious Sam fans to be worth looking into.