As games become increasingly complex and try to explore new, innovative ideas, the market is ripe for a game that takes us back to square one. Despite our lofty ideals and desire to treat videogames as art, there’s still a base hunger for reckless destruction and wanton violence, the kind that has permeated our entertainment since time immemorial.

Enter Serious Sam 3: BFE, a game that saw an opportunity and took it. In a generation full of military shooters and quirky gimmicks, “Serious” Sam Stone knows exactly what you need, and is more than happy to deliver. 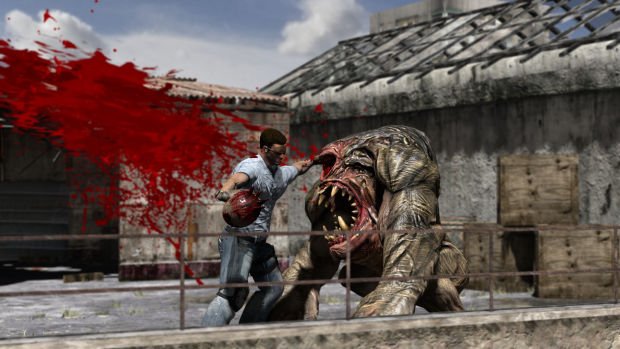 When playing Serious Sam 3: BFE for the first time, one could be fooled into thinking Croteam had bowed to mainstream gaming conventions. The first few levels are quite slow paced, giving Sam only a limited handful of generic weapons and pushing him through corridors filled with scant, evenly distributed enemies. This is not the Serious Sam you’re used to, and those looking forward to a mindless cavalcade of violence may feel disappointed.

It is, however, little more than a trick. Although the game starts off with a deliberately slow build, it does not take long for Serious Sam 3 to become perhaps the most ludicrously violent, brutally stressful game in the entire series.

Serious Sam 3 preserves the wave-based gameplay of past iterations, in which enemies spawn at a rapid rate and assault players in unremitting legions. Once again, Sam’s arsenal of weapons are fairly standard but wholly satisfying, with rocket launchers, sniping devastators and miniguns mercilessly chewing through the opposition. New to the series is an assault rifle with a sight scope — perhaps the only concession to the modern shooter this game ever makes.

If Sam is near enough to certain enemies, he can take them out instantly with a melee attack. Melee attacks allow Sam to rip the hearts out of beheaded rocketeers, pull Kleer skulls from their bodies, and even remove a Gnaar’s cycloptic eye. While melee attacks seem overpowered at first, performing such moves during intense enemy waves soon becomes impractical, since Sam will take damage during the attack animation and will also have to drop whatever he yanked from the monster’s body before using weaponry again. When one can safely pull off an execution, it’s sadistically amusing, but it’s never overpowered since performing them is not always sensible.

Most of the enemies are familiar, with headless kamikaze troopers, laser-spewing Biomechanoids and vicious Kleer skeletons returning with their familiar attacks in place. Every enemy has been redesigned to make them look more detestable — and even disturbing — than ever. There are some new monstrosities to encounter, chief among them the ape-like “space monkeys” that are actually quite frightening in their first appearance, since they hide in the dark and leap out at Sam. They get quite irritating after a while, though.

Whatever new items have been thrown into the mix, this is the Serious Sam fans know and love. The large environments will cause players to become agoraphobic, as a wide space only means that an absolutely gigantic wave of enemies is coming. These waves are consistently oppressive, and will regularly push players back as they constantly retreat to gain space between them and the approaching aliens. This “one step forward, two steps back” approach is a series staple, but sometimes it can get a little aggravating, especially once you’ve cleared an area and need to walk through a huge empty corridor. Still, one cannot deny the simple pleasure of knowing that you just took on an entire army and won. 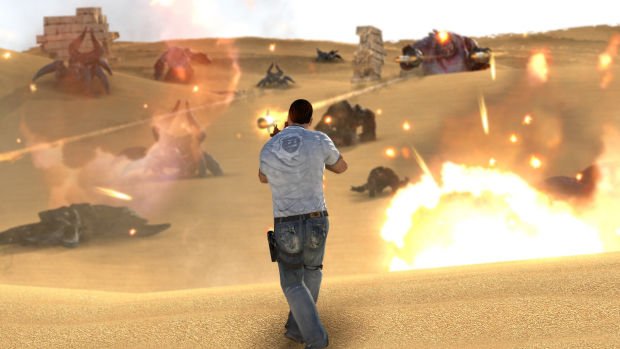 Of course, winning isn’t quite that simple. Serious Sam 3 is damn hard, and swearing at the monitor can be a common occurrence, especially in the last few stages, with Croteam perfecting the art of combining certain enemy types to create the most potent threats possible. Players will learn to truly despise the Kleer this time around, as they always come at the least helpful moment, backed up by other creatures that cover them with explosive projectiles while they get in close with their bony blades. I’ve not even mentioned the Brides of Achriman yet, with their telekinetic ability to hold players in place while other monsters take potshots. This is a strenuous, savage, unapologetically “hardcore” game, and I don’t think I’d have it any other way.

Fortunately, manual saves are in place, which is useful considering how long this game can be. Single levels can take between twenty minutes to a whole hour, which is almost unheard of by today’s standards. Most first-person-shooter campaigns take four hours in total to beat these days, but you won’t get through a quarter of this game in that time. The only downside to such a setup comes with the last level, which ramps up the length to an extreme degree and forces players down a very linear, tight canyon for over two hours. Over two hours for one level. It doesn’t help that it’s a rather boring and dull level, leading the game to end on a frustrating, almost demoralizing note. Without that final chapter, Serious Sam 3 is a huge amount of punishing fun. The final stretch is all punishment, no entertainment.

The combination of challenge and level length makes for a game that can actually become exhausting. After tackling legion upon legion of single-minded cosmic horrors for over an hour, it’s not uncommon to feel mentally and even physically drained. One’s clicking finger will be overworked, one’s mind full of the screams of kamikaze warriors and the hoofbeats of Sirian Werebulls. Serious Sam 3 can put players to sleep — not through being boring, but through wearing them down to the very bone. If that sounds like a criticism, that is not my intention, as a game that can maintain such levels of rigorous intensity over such extended time periods is remarkable, and deserves a measure of high praise. 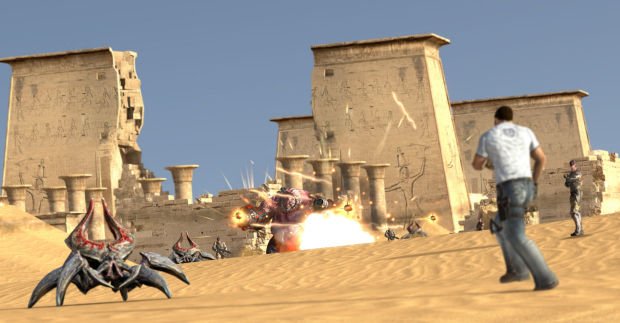 In addition to single-player, the campaign levels can be conquered with up to sixteen allies in a variety of cooperative modes that allow for limited or endless respawns. While co-op is not quite as challenging as going solo, having a squadron of players in one map can be pretty damn fun, especially with the range of silly character skins on offer. There is a Survival Mode, which simply tosses players into a map and spews out enemies until all players are dead. So, it’s basically the campaign without a story.

Competitive multiplayer also returns, and it is by far the roughest offering in the box. Environments look significantly uglier and everything feels rather sparse and alienating as players run around each other, firing off shotguns until somebody stops moving. The gameplay is barely evolved from the early nineties, which is part of the charm, but definitely isn’t worth playing very much. The biggest issue is that Serious Sam is a game about overwhelming odds, and stripping that down to a small amount of players runs contrary to the philosophy. I think Croteam would do well to infuse multiplayer with the same spirit as the solo mode, perhaps having players fight it out in environments that regularly spawn alien enemy waves. That could turn multiplayer into something truly special.

It has to be said that Serious Sam 3: BFE is not graphically impressive. In fact, the whole production is unpolished and a little messy. The new Serious Engine produces visuals barely on par with early Source Engine games, and animations are pretty terrible, especially when it comes to melee attacks. It is not the ugliest game on the market, but it’s definitely not a looker. However, that absolutely does not matter in a game like this. BFE never set out to wow players with aesthetics, and the fact that a team as small as Croteam got it looking this good is admirable, to say the least. The rough look, if anything, just adds to the ballsy, reckless attitude that drenches the entire game, and the gorgeously hideous creature design more than makes up for any engine trouble. 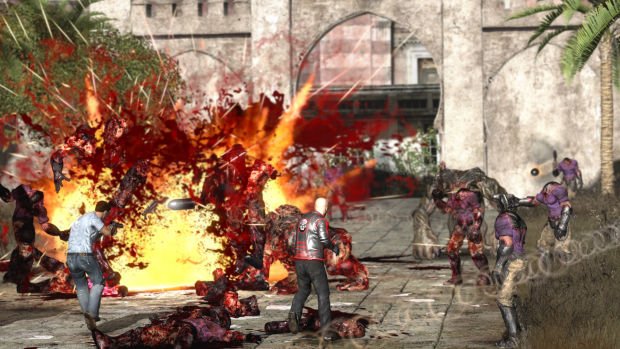 The game’s brilliant musical score and sound effects do a lot to cover up the visuals as well. One hardly has time to pay attention to graphical flaws when metal guitars are roaring and fifty exploding corpses are screaming in your direction. I am a little disappointed that Sam’s idiotic one-liners aren’t quite so common, but when they do show up, they’re gloriously stupid.

Serious Sam 3: BFE is not a game for the faint of heart. It will challenge your resolve while it constantly pushes you back under a tidal wave of skeletons, fireballs, rockets and chaingun-wielding scorpions. Its levels can last up to an hour, its gameplay never deviates from one note, and it will cause players to thump their desks and roar with rage, but it’s so much fun. There was such a significant gap in the market for a game like this, its simple charm and sheer wealth of content serving as the perfect antidote to all those “cinematic” military shooters and po-faced “edgy” games that have burrowed deeply into this generation. This is a game that remembers how much fun it can be to just give a player some guns and a bunch of uglies to shoot.

It’s a lot of fun indeed. A lot of backbreaking, grueling, soul-destroying fun.