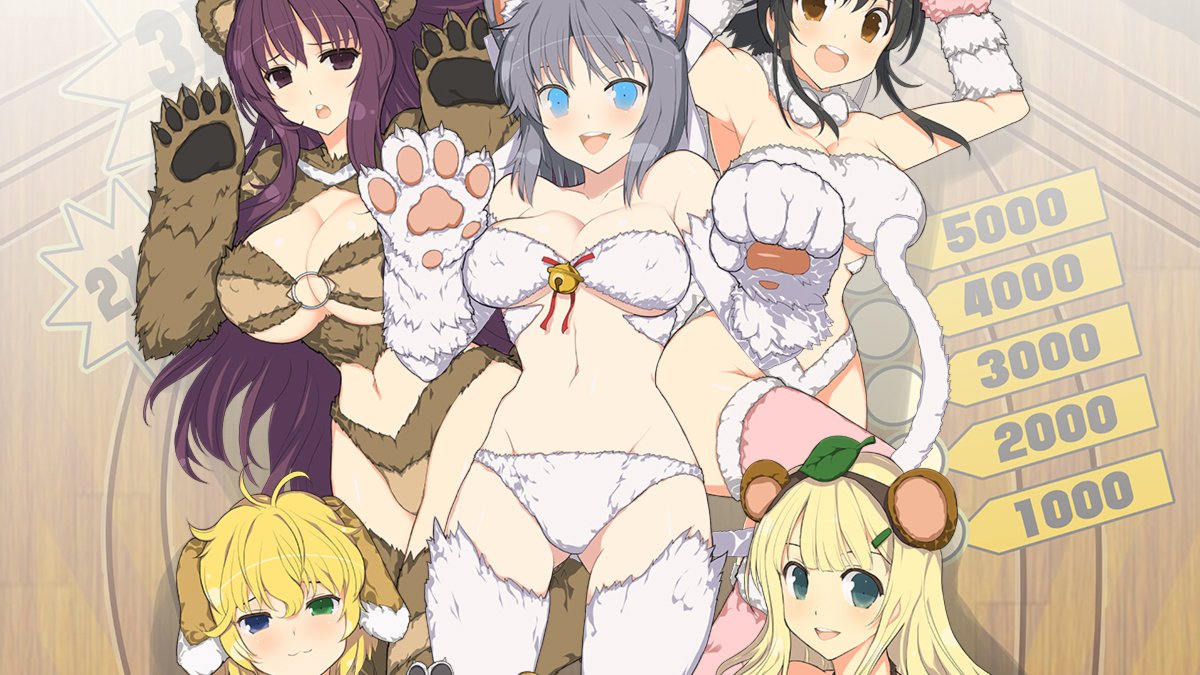 The Senran Kagura series is in a bit of a tough spot right now. Kenichiro Takaki, the creator of the franchise, announced in March that he was leaving developer Marvelous, feeling he was being restricted on what kind of content he could show in his games. While he is still attached to the announced Senran Kagura 7even, it’s unclear exactly what that game will end up being due to Sony’s recent prudish ways.

Of course, as I’m sure many have pointed out before, Takaki could just move the game over to Switch. Nintendo has been receiving of the Senran series since its inception. Even something as over the top as Senran Kagura: Peach Ball is welcome on Nintendo hardware, which is great because it might be the best Senran spin-off to date.

The Senran Kagura series is no stranger to ridiculous plots and eye-popping fan service, two things Peach Ball has in spades. The game is set in the Honey Arcade where Haruka, the puppet master of Hebijo Academy, works part time. Unfortunately, the place isn’t always busy and in her down time, she likes to do some chemistry. One of her latest concoctions is Beastall, a liquid that turns anyone who touches it into an animal.

As is wont to happen with this series, things go awry during a video game tournament when the heterochromatic Ryona mistakes the serum for soap and turns into a dog. She then goes about licking the four other girls there with her, which she probably would have done even if she wasn’t sporting dog ears and a tail. Murasaki, Yumi, Yomi, and Asuka soon start turning into animals themselves, leaving it up to you and Haruka to change them back using the power of the Peach Ball.

It’s a totally cheesecake set-up and the developers smartly lean all the way into it. Unlike the last time Honey∞Parade Games got its hands on the franchise, Peach Ball is an always light and airy experience. Most of the dialogue of the story mode thick in the cornball sexuality fans expect and the pinball gameplay of the Peach Ball can be exceptionally fun if frustratingly meager.

Senran Kagura: Peach Ball has just two pinball tables: Peach Land and Spooky Shinobi Park. Each table has different themes and backgrounds players can unlock, but nothing to quintessentially change how the table plays. Through all five hours of the campaign, it’ll just be the same two tables over and over, which can sound monotonous. However, the pinball gameplay has enough features that repeated plays never grows rote, with plenty of bells and whistles to keep each run buzzing with excitement.

Peach Land is the standout of the two tables. The theme park design of it is inviting and its layout is thoughtful and full of character, especially as you begin to learn the tricks of the table. There are teacup bumpers to hit, a Ferris Wheel to activate, a drop ride, and more. A lot of love went into the creation of this table and it shows. There is clearly some love in the design of Spooky Shinobi Park as well, but it’s general design is too similar to Peach Land, and its gimmick — mini-games you can activate when you collect enough coins — can often be difficult to activate.

Unlike a regular game of pinball, Peach Ball encourages players to shake the table, using either the Joy-Con motion controls or thumb sticks, and doing so can help player rack up the points. Each table has one of the five girls at the center of it and if you hit them in their special spots — boobs, butt, taint — you’ll score massive points. One of the best ways to send that score flying is to trap the ball behind the girl, creating a situation where it’s always bouncing off her. Bumping the table is one of the ways to make this happen, but you can also do it with a perfect shot. You should know that Peach Ball does not feature true-to-life pinball physics — they feel tilted in the players favor — but it never crosses a line to where the game is too easy.

As you play each table, you’ll have a growing series of challenges to complete. These are listed to the right of the screen during gameplay and can ask you to score a certain number of points, hit the ball into a specific location multiple times, or repeatedly bump the girl with the ball. Score enough points and you’ll open the opportunity for a Sexy Challenge. These are pinball mini-games where the object is to hit whatever little toys dot the table enough times that your girl ends up in a compromising situation. Some of these challenges include rubber ducks that get the girls all wet, an ice cream truck that gets them sticky, or magical top hats that produce a pair of tickling hands.

It’s all very tongue-in-cheek and never crosses over into being grossly exploitative. Even the Super Sexy Challenge, the final bit of each table where you’re just smacking Peach Balls directly into the girl’s boobs or butt, is all in good fun. But that fun feels limited when there are only five girls and just two tables.

Outside of the story mode, players have access to a free mode that allows them to play to their hearts content. Playing either mode will net you coins to spend in the in-game shop, and there is a lot of content here to unlock. New clothes, hairstyles, Peach Ball designs, artwork, music, and more is up for grabs, and unlike with a lot of games, I thoroughly enjoyed going through and unlocking everything in the game because the core gameplay is so damn entertaining. And yes, the dressing room returns with costumes, diorama poses, and the Reflexions-like intimacy mode that lets you touch the girls all over.

Marvelous and Honey∞Parade Games’ biggest mistake with Senran Kagura: Peach Ball was treating it as a budget title because it deserves so much more: more tables, more girls, more everything. Combining the cheeseball sexuality of Senran with pinball is perhaps the most brilliant idea this franchise has ever had and the execution of what is here is nearly flawless. But the lack of a diverse set of pinball tables and a curtailed cast keep Peach Ball from reaching the excellence it could have so easily achieved if the developers had more time and more ideas for what they wanted Peach Ball to be.