Selling an original game is hard! Trying to convince players why they should try something new without being able to compare it to an existing property is tough at the best of times and with a huge marketing budget and even then, the possibility of making it a hit is not high.

Ubisoft gave it a try back in 2007 with the original Wartech: Senko no Ronde… and it was a huge flop. Now, 10 years later, Degica games are trying again with an enhanced version of the sequel in the form of Senko no Ronde 2. And history looks like it will repeat. 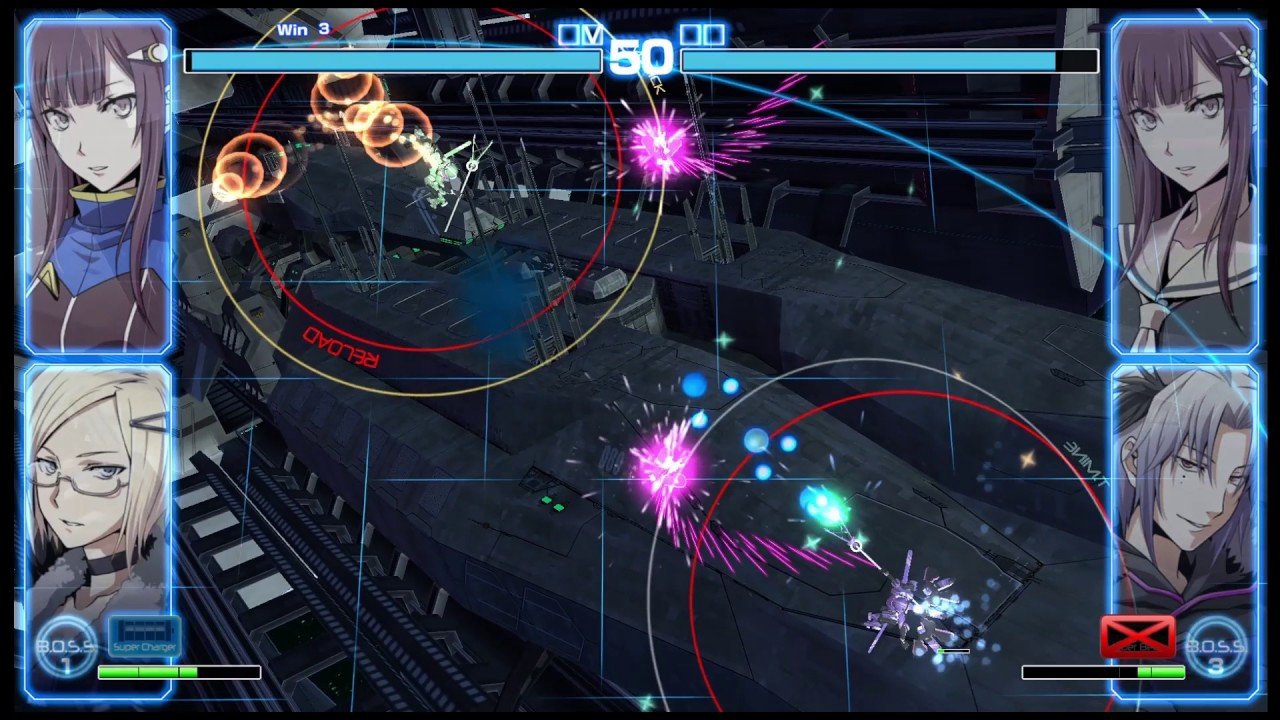 First, a bit of a history lesson. Senko no Ronde was originally an arcade game, developed on the Sega Naomi board (basically, the Dreamcast) and was ported to the Xbox 360 in 2006 for release in Japan. A year later, Ubisoft published the title under Wartech: Senko no Ronde in the west and the game sold very poorly. A sequel, Senko no Ronde DUO, was released in arcades and for the Xbox 360 in Japan in 2010 but they remained exclusive to the region, until now!

Senko no Ronde 2 is basically a remake of Senko no Ronde DUO, created by G.Revolution (the original developers) and chara-ani. It sports some character balance changes, adjustments to certain mechanics, new character art and voice acting, and an overhaul on the graphics, but otherwise it’s the same as Senko no Ronde DUO so more dedicated fans who obtained a copy of the original Japanese 360 version will feel right at home.

Gameplay-wise, this may take a while to explain. It’s essentially a combination of shmup and 1v1 fighting games. Players pick a character (and associated mecha) and their support helper, and then fight it out against an opponent. The majority of attacks are projectile based, with each character having unique barrage attacks which fire many bullets and effectively form a shmup bullet pattern for the opponent to try and dodge or block. There are also melee attacks to use up close and a special B.O.S.S. mode which dramatically increases a character’s attacking abilities for a short period of time. If you have played the Psychic Force games by Taito, this is the closest comparison I can think of, except that the bullet patterns are far more elaborate in Senko no Ronde 2 and it gives much more of a shmup vibe than Psychic Force ever did.

The game itself comes with an assortment of modes from the basic arcade mode to score attack and training. There is also a story mode from the Xbox 360 version of Senko no Ronde DUO. The story mode was revamped for this new release and plays similarly to edge master mode from Soul Calibur, with text pushing the story forward and battles breaking up the monotony. Some battles have special stipulations for you to successfully complete as well, requiring you to think up new tactics to win. Be warned though, there is a LOT of text in between fights but at least a large portion of it is voiced.

Like many fighting games, opponents start off easy but quickly become more difficult at later stages and/or at higher difficulties. The game tries to ease you in but you can find sudden difficulty spikes when playing against certain characters due to your own pick. Equally, it does not teach out much beyond the universal mechanics for the game so you will need to experiment a fair bit to get a good grasp of your character. But like most fighting games, Senko no Ronde 2 only really comes to life when you fight other players… and that’s where the title fumbles. It’s perfectly fine when played offline but online is a very mixed bag. Playing on PS4, I’ve encountered a strange bug where the game would lock on a black screen while trying to load up a match.

If you’re the host, you will need to restart in order to get out and try again, while the opponent just gets sent back to the main menu. It happens often enough to be an issue but it’s not too frequent. Hopefully, the bug will be removed in a patch soon. The other issue with the online has nothing to do with the game itself but presents the biggest obstacle it faces: a lack of players! Should you find a player in the same region, then the netcode is perfectly acceptable, with the game feeling responsive enough to allow players to move freely, but get paired up with players further away and it quickly starts to suffer with notable and often unbearable lag.

Senko no Ronde 2 also allows you to accept online challenges while playing through the arcade mode but you’re unlikely to get matches that way. The problem is that, with only a small pool of players to battle, the chances of having to fight players from further afield is much more likely than with bigger fighting games, and that pool is unlikely to grow substantially. Degica tweeted out that the EU region downloaded the free demo on PS4 10,000 times but that is unlikely to translate to an equal number of sales, or even anything close to it.

And herein lies the rub. The game itself is mechanically sound (though there are some balance issues with certain character types being too good) and fans of the earlier games in the series will be well catered for, but Senko no Ronde 2 is rather unforgiving to new players. It doesn’t do a particularly good job at introducing the intricacies of the characters’ more unique mechanics and is unlikely to draw in players who have never heard of or seen the series before. The price tag is also rather high for what it is, particularly on PS4, and will also serve to deter potential new players from jumping in. If the game was perhaps $5~10 cheaper, that entry barrier would be less of an issue.

Fans of Psychic Force or the first two Senko no Ronde games will likely find plenty to be happy about with this release. It’s a very different kind of game which you just can’t find elsewhere but I fear that the entry requirement for new players may be too high for them to bother. It took over ten years for the west to receive another Senko no Ronde game for the region, but it looks like this new release is fated to follow the same path as its predecessor.