Scythe. You’ve heard of it but never played it because none of your friends wanna take the 80-dollar plunge for a game that people might not even enjoy. So you buy the bare-bones licensed Tabletop Simulator version, knowing it has no AI but hoping some of your TTS friends will play with you. No dice. Finally, you cry out from the highest peak of Europa, “An opponent, an opponent, my kingdom for an opponent in Scythe.”

Was that a little too personal? Apologies, but I’ve heard nothing but great things about Scythe for years around board game discussion outlets and despite that interest, I’ve never been able to convince my gaming group to play. Thankfully the folks at Asmodee heard the cries of people like me and made a digital adaptation of the critically acclaimed board game. Was the wait worth it? Depends on what you want out of the adaptation. 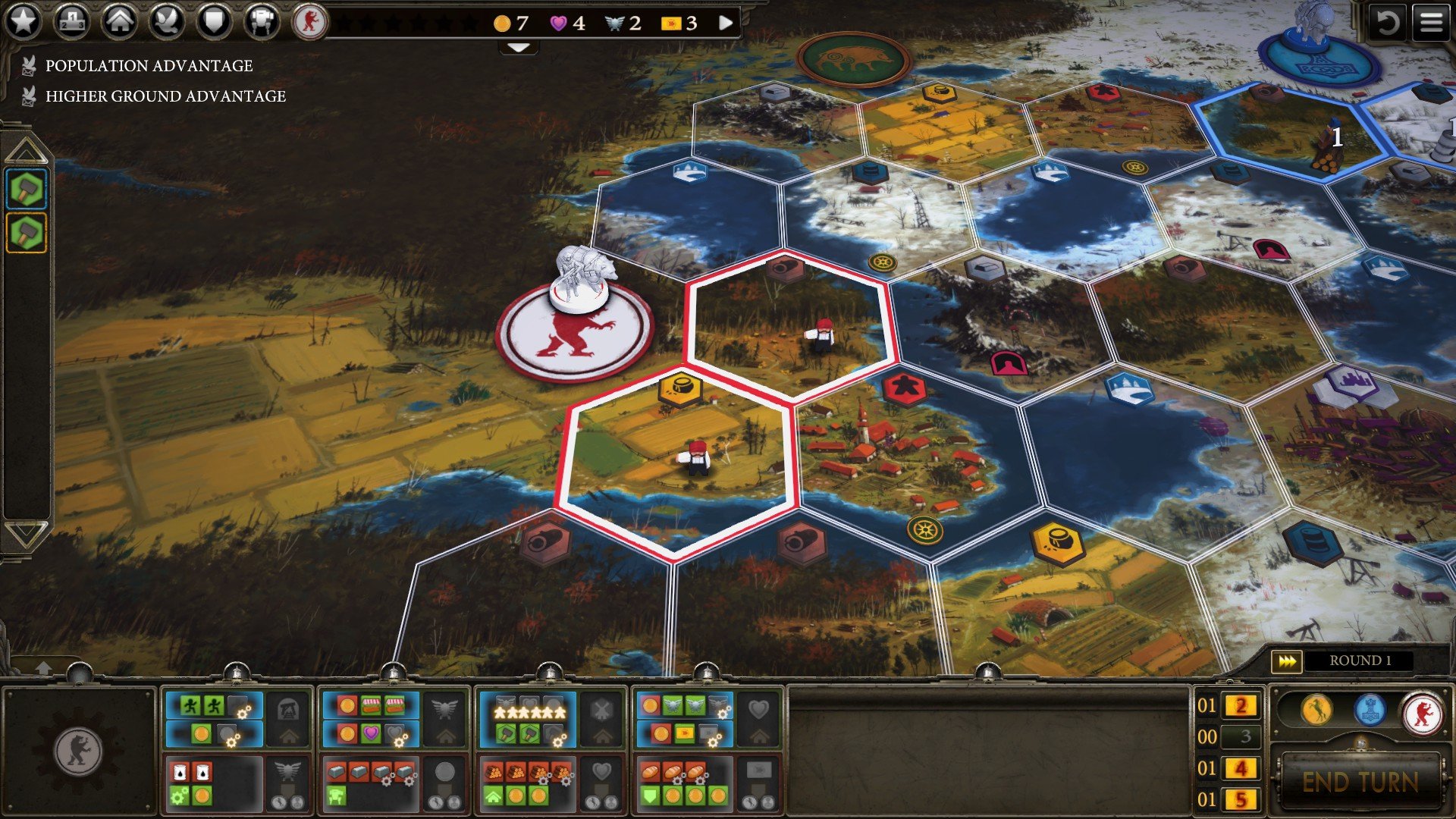 Scythe takes place in an alternate-fiction post-World War I era Europe. The Great War ravaged the continent but also brought forth technological advances from an ominous independent nation-state called “The Factory.” You play as one of five factions that are left to pick up the pieces of the broken continent and come out ahead of your neighbors by any means necessary.

Mechanically, Scythe plays out like a standard 4X. You explore, you expand, you exploit, and (sometimes) you exterminate. The ultimate goal is to be the most influential across the continent by the end of the game, be it through the glory of war, expansion of territory, or just pure wealth.

The rules in the adaptation are exactly the same as the base board game so don’t expect anything different there. For the purposes of this review, I will not be judging the game based on Scythe‘s rules. We’re about three years too late on that, and more so I want this review to focus on the adaptation of the board game to the digital realm.The tutorial is adequate for first-time players but poorly implemented in the game.

Every time you are taught a new rule or mechanic, the board has to be reloaded, which makes for a jarring experience. Just like life, learning the rules and strategies is best done through hard failure. Thankfully there is a speed-up function that cuts games down to around a half-hour, allowing you to speed through multiple games in the same amount of time as one in the physical realm.

The ability to play multiple games in a short amount of time is where the adaptation’s strength lies. It’s like practice for the real thing. The AI, while formidable, follows a similar pattern each time but does make attempts to block you in if you get too ambitious. It’s no match for a real opponent. But if you want a crash course in what not to do, then look no further. I got beat down by the AI multiple times before I started to get the hang of what to do and which strengths to lean on with each faction to the point where I started ending up in the top half of the scoreboard, instead of dead last.

While I attempted to get a multiplayer game going online during the week, the number of games available are few and far between. I was able to join a game on the weekend thanks to peak playing time for most people in the US but that was the only time I could get a live opponent. There is a mode available where you can join a game, make your move, then come back after a few hours and make another move, but I’ve yet to get one going.

Unfortunately, because of this, it feels like something is missing from the game, and I know that isn’t the fault of the developers. Scythe is all well and good as a single-player experience but there’s something about having another person that doesn’t follow a set pattern that makes the game feel more alive. I’m grateful for the fact that this adaptation exists, but if given the choice of playing it on the PC with an AI or going up against real-life opponents, I’m always going to choose the latter.

My biggest issue is that DLC is so blatantly being held back from the game that it’s annoying. The base board that you play on has the artwork for the two factions from the Invaders from Afar expansion and it’s like they aren’t even trying to hide the fact that there is still more money left to be spent. I understand the need to charge for expansions but at least try to hide it next time. 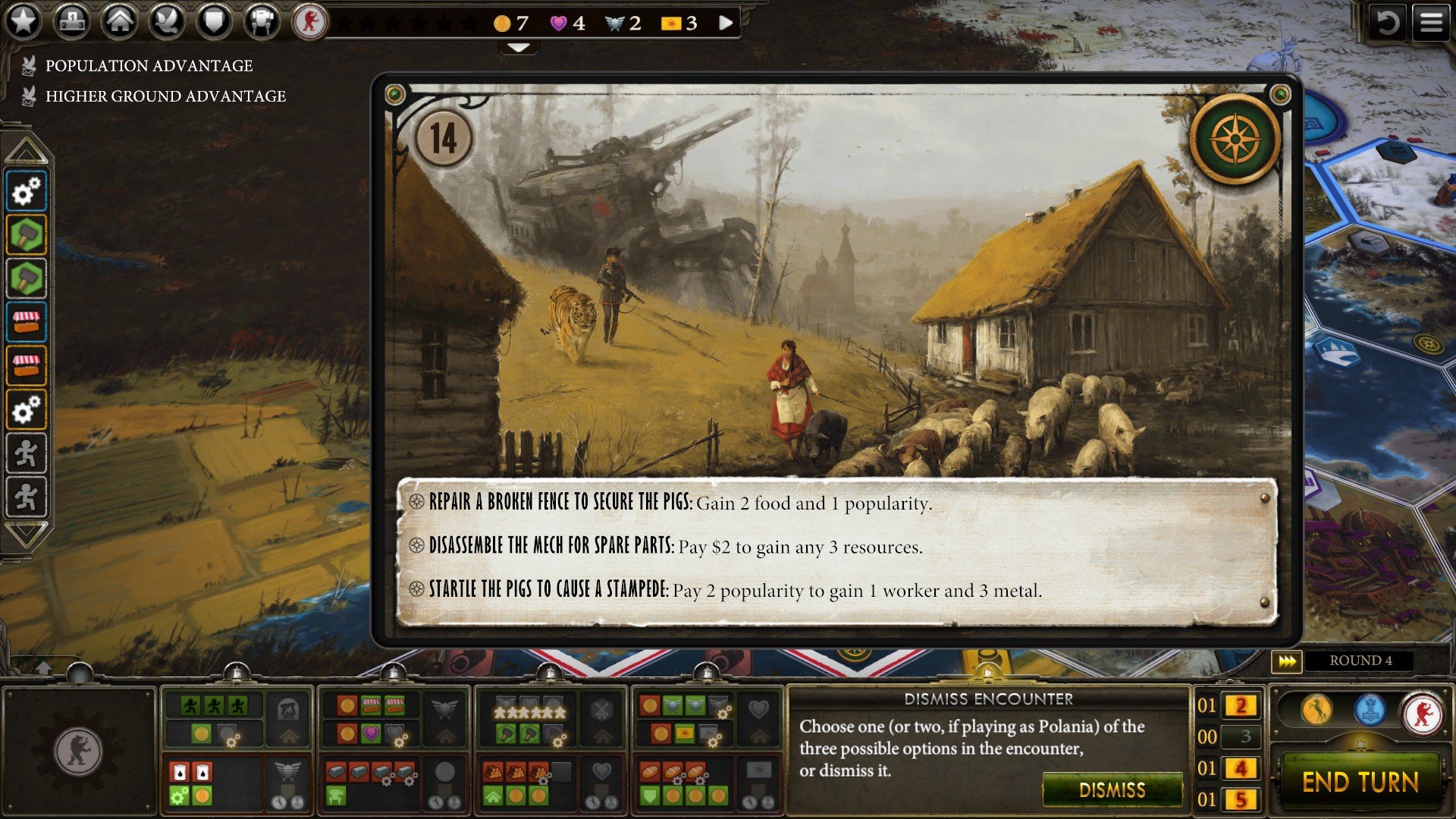 Overall if you’re looking for a way to get your Scythe fix in on a Tuesday evening when everyone else can’t play, then yes, this adaptation is for you. If however you’re looking for a replacement for your gaming group or a rigorous competitive scene, the player base just isn’t there yet. Perhaps after the next Steam sale there will be more players, but for now, I will have to continue to get my face ground into the dirt by Russia Rusviet as a single player rather than seek the boot of another human online.