A hybrid with good mileage

I think the first Sanctum game surprised a lot of people. It took the intellectual strategy aspect of tower defense games and combined it with the more action-oriented first-person shooter genre to create a unique, wonderful experience. Sanctum 2 aims to retain that experience while simultaneously changing the fundamental mechanics in order to create something familiar, yet different.

You know, it’s funny. If this review had released only a week ago, it would have read quite differently. However, a patch was released recently that addressed many of the glaring problems that fans, myself included, had with the game initially. It’s quite a significant patch and certainly demonstrates Coffee Station Studios’ dedication to their fanbase. 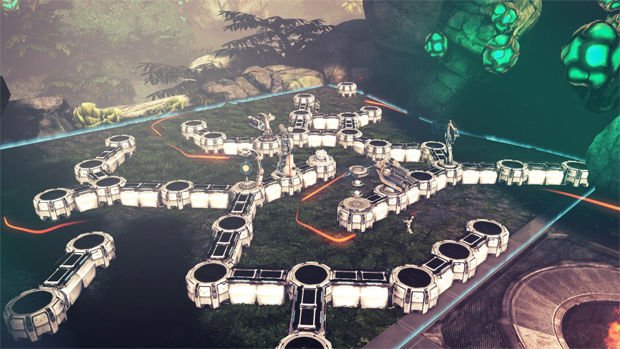 Sanctum 2 introduces an actual plot, if you can even call it that. Told through comic book-esque loading screens, the story revolves around the four main characters and an alien outbreak. Each plot segment basically consists of the characters going somewhere new and reacting to their surroundings or some event. It isn’t in any way interesting, but it also isn’t obscenely bad. It just is. The story does, however, end in a cliffhanger, likely to be resolved with DLC. At the very least, the art of the story bits is very nice to look at.

Sanctum 2 blends both tower defense and first-person shooting, though the emphasis tends to lean towards the latter element. Gameplay takes place in waves, with the amount of waves depending on the specific map. The objective of each map is to protect the Core from aliens by killing them before they get there. Each wave will spawn a specific amount of aliens, the exact type and number being transparently displayed to the player beforehand.

The shooting feels pretty much exactly like you would expect. “Aiming down the sights” has sort of been introduced, although it isn’t very useful in most situations. Unlimited sprinting is also present, making Sanctum 2 feel a lot more like traditional FPS games than its predecessor. This isn’t a bad thing, of course, since better aim control and faster movement are always welcome. Enemies have glowing red weak spots that take extra damage, whether it is their unarmored butthole or their head which curiously resembles a pair of testicles.

There are four characters to choose from, each unique in their movement and weapons. They all feel different, and chances are that each player will find a character that suits their playstyle best. Call of Duty-style perks and a secondary weapon are customizable to ensure that characters can be further customized to your liking. The amount of perks that can be enabled at once as well as the perks themselves are unlocked with leveling, so higher-level players will be better at killing aliens.

Tower resources drop in between waves and come in two forms: tower bases and actual towers. Tower bases are used to create a maze, forcing the aliens to walk much further in order to get to the Core. They are also necessary to host the towers themselves; a tower can only be placed on top of a tower base. Resources drop for each player in multiplayer, though if someone so chooses, they may steal other players’ resources if they get there first.

The resources always drop onto the map at the Core, usually forcing players to run back and pick them up. In multiplayer this has some extra significance — if one player wants to pick up another players’ resources (after asking, hopefully), they can increase the amount of towers they can build. In single-player, however, running back to the Core in between rounds becomes the definition of tedium.

Occasionally, the tower-building phase of a round will be timed. While it may seem like this serves no purpose other than to frustrate, it does add a good amount of tension to an otherwise lengthy portion of the round. Instead of contemplating which maze layout is the absolute best for a round, the game challenges players to think on their feet, especially when it is required to run back to the Core to pick up the resources. These timed tower-building phases never seem to come before an incredibly difficult wave, so they serve as a good way to mix things up a bit for the player(s).

Also mixing things up are the bosses, which generally rear their ugly heads during the last wave of most maps. These bosses usually have unique traits, like the ability to destroy towers and tower bases, forcing players to rethink their strategy. While the bosses feel appropriately challenging, losing on the last round sometimes feels inevitable depending on which towers players initially brought into the mission, since there’s no way to tell what type of enemies or bosses will show up as the mission progresses. 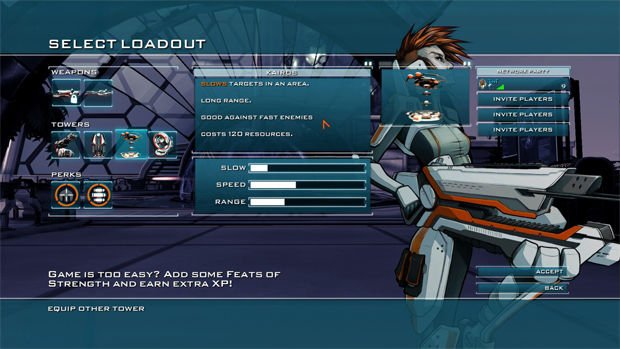 While there’s a wide variety of towers to choose from, each player may only take a certain amount into a map at a time. The exact number increases upon leveling up, again making higher-level players immediately better than lower-level players. It is a cooperative game so it isn’t a huge issue, but if a higher-level player plays with someone who is new, chances are that the higher-level player is going to be putting down most of the towers simply because they have access to more of them.

Towers can be upgraded using resources up to level three, however the amount of resources needed to upgrade a tower is not displayed. This is incredibly frustrating and boils down to trial and error: dump resources into a tower, see if it upgrades, then decide if it is worth it to keep the tower as is. Displaying the number would immediately alleviate this issue and is a very odd omission.

Each player’s health is hidden, but only to themselves; in multiplayer, looking at a fellow player will plainly display their health in numbers. Health does regenerate and turns the player’s vision more grayscale as it decreases, but the overall lack of hard information displayed to the player in Sanctum 2 is almost insulting. 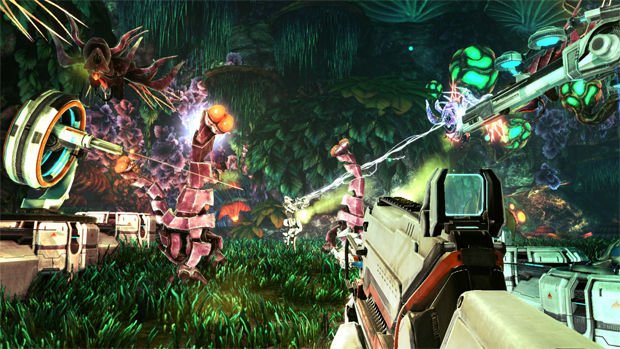 Missions have way more replayability in Sanctum 2 thanks to the Feats of Strength mechanic. Players are allowed to include up to five Feats of Strength in any mission, each one increasing the difficulty and experience earned. These Feats include things like increasing enemies’ HP, speed, and giving them regenerative health. This allows players to customize the difficulty to their own level, while simultaneously reaping more rewards for more risk. There’s also an included “Easy Mode,” which reduces the overall difficulty of the map. Each map can also be played in survival mode, which tasks players with surviving for as long as they can against an endless amount of waves.

As mentioned before, every player in multiplayer gets their own drop of resources in between rounds. Other players can grab them if they get there first, so beware of jerk players who do so without asking. Others’ resources are not displayed, making it a huge hassle to coordinate planting towers or tower bases. Voice communication on the PC version is also borderline useless since the volume is so low and cannot be raised; be prepared to text chat if you want to get anything done.

The PC version as a whole seems like an afterthought of the Xbox version. There is no server browser, the leaderboards say “Gamertag” instead of “Steam ID,” and player number is indicated by the Xbox controller ring lights. The game performs fine and has a healthy amount of options, but the edges are a bit rough on this PC port.

Sanctum does look impressive, visually. The white laboratory theme from the first Sanctum is only a small portion of the sequel, with outside environments making up most of the campaign levels. Many of the enemies are carried over from the first game and look pretty much the same. The sound design is excellent, with great weapon sounds and music that sets the science-fiction atmosphere incredibly well. 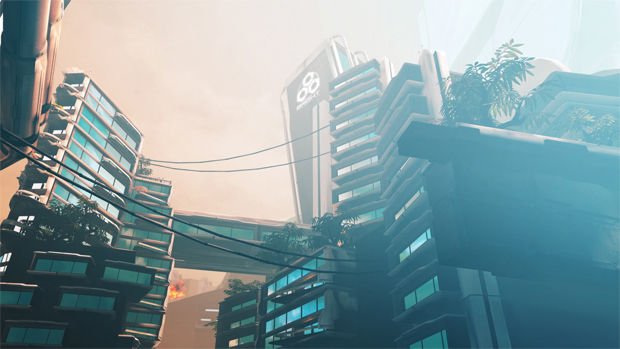 As a whole, Sanctum 2 feels confused. It isn’t quite as much tower defense as fans of the first game would probably hope for, since more of the emphasis this time around is placed on the first-person shooting element. It also hides way too much information from the player, leading to a lot of guess-and-check strategies. The game remains a refreshing hybrid of genres, however, and many of the frustrations temporarily wash away as you lay witness to the last enemy in the last wave die, proving that your strategic planning and accurate shooting have paid off.