I knew exactly what I was getting into with Samurai Maiden, I’m just not exactly sure why I went with it. I guess I was hoping it might do something different. You could easily describe it as an Isekai, though technically, the main character travels back to the past; she then goes into Yomi. It’s about her trying to survive, kind of, while she’s being helped by ninjas from both her own and parallel dimensions. It’s a little bit yuri, and pretty shoujo.

I guess with it tying in the Sengoku period, I was hoping it might do something unique. 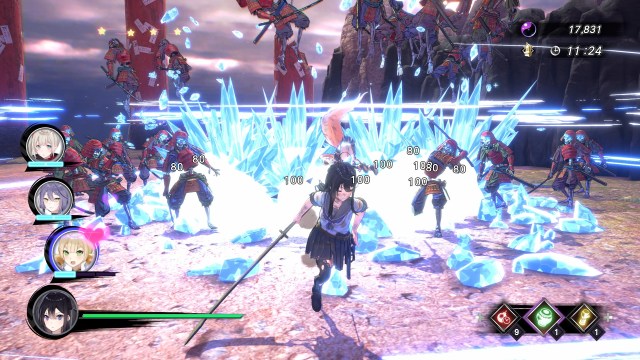 I’d like to back up a few steps and say that Samurai Maiden isn’t bad. It’s just that you can probably tell by looking at it if it’s something you’d be into. It’s probably exactly what you’re picturing it is.

The story is told much like a visual novel, with characters standing rather motionlessly in front of a static background while text plays in front of them. It’s the story of Tsumugi, who gets abruptly and inexplicably transported back in time to the burning of Honnou-Ji Temple in 1598, which was famously when warlord Oda Nobunaga died. She meets Oda Nobunaga, who is fabulously voiced by Takaya Kuroda — the voice of Kazama Kiryu from the Yakuza series. However, she doesn’t seem to realize he’s supposed to be dying, which is funny, because even as a Westerner, I know the story of Oda Nobunaga.

Anyway, she helps him live, and then she and a bunch of ninjas go to thwart the revival of some sort of Demon Lord. It is a cling-wrap transparent plot. I wish I could say that it gets better, but it really doesn’t. The focus is instead put on the characters who aren’t that terrific either. They’re all pleasant enough, but they’re so archetypal and generic that it’s really hard to care about any of them. Oof. They wear white panties, though, so we can at least tell that they are brave beyond reason.

The gameplay is that typical Musou-style light and heavy attack hack-and-slash system. The big hook here is that you can summon your friends to perform special attacks pretty frequently. Iyo does direct damage, Hagane does more sustained damage, and Komimi does an area-of-effect. You charge them by dealing damage, but they get filled pretty quickly if you stay on the offensive. It works well, for the most part.

What doesn’t work well is the actual combat that your girl Tsumugi does. It’s obnoxiously gluey and doesn’t flow well. You unlock additional moves by getting closer with your girls, but the combos aren’t really much to speak of. Moving affects what attack your character does, so holding forward means the difference between throwing a single, ineffectual heavy attack or starting a combo. I hate that. You can’t ask me to remain mobile and then stop to begin a combo. You also can’t dodge cancel, which adds to the clunky feeling. If your character is throwing a flurry of slashes, there’s no way to interrupt it, even if they’re standing in the danger zone. 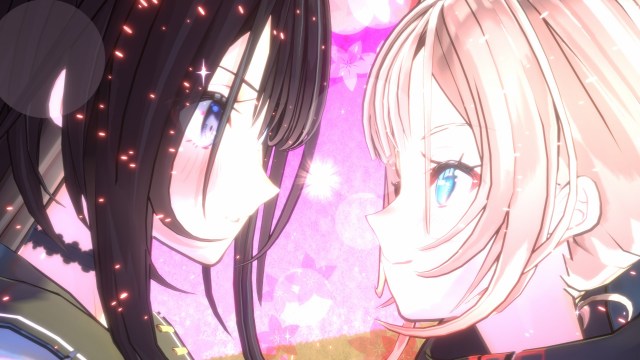 Her warmth, her softness

The levels are also aesthetically repetitive and uninteresting. You’re usually in caves or around Japanese castles that are floating in the ether. The rooms are always boxy and under-decorated. They sort of melt away when combat starts, but the environments certainly do nothing to help engage.

The graphics, at least on the PC version, are pleasant, even if they’re neither intricate nor well-utilized. The characters are detailed in their adherence to the archetypical anime style. There’s a shimmer to their eyes, and small details really pop out.

Unfortunately, whenever there are few cutscenes. Almost every bit of storytelling is done in the visual novel-style dialogue scenes. The characters don’t act out what they’re doing, instead, they just shift from pose to pose like they’re voguing for the camera. The dialogue is so long, fluffed up, and drawn out that I found it impossible not to just skip through some of it. To be fair, it’s really hard to avoid dumping tonnes of exposition when you’re not showing what is going on in the story. But then they keep piling fluff onto this exposition, and then they have characters repeat things over and over.

It’s a lot. It’s not awful, but if you want to actually pay attention to all the dialogue, you’re going to be spending a lot of the game’s runtime watching the characters vogue for the camera. 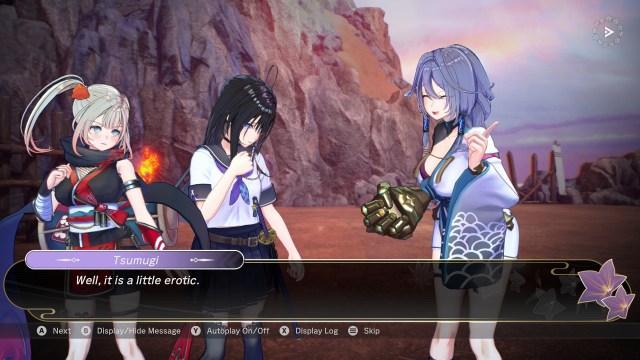 Samurai Maiden isn’t really a bad game. Like I said earlier, if you look at it and think it’s something you might be into, it’s probably safe enough to try out. On the other hand, I can’t think of one thing I found outstanding about the game. The lesbian undertones? That’s nice, I guess. I’m always on board for more non-heteronormative characters, but that’s not enough to carry things. My mind keeps going back to 2021’s Perfect Gold, which was an actual yuri visual novel that had much better writing.

Are my standards too high? Maybe.

Then you also have to factor in the launch price and the extensive list of DLC costumes. I don’t often like to complain too much about pricing, but I find it particularly egregious here. One of the excuses that kept rolling around my head to make sense of Samurai Maiden’s shortcomings was “low budget,” but if that’s actually the case, asking such a high entrance fee and then asking more for cosmetics is a bit galling. I’d have an easier time recommending it if it was at a budget price.

Instead, I can only recommend Samurai Maiden if you look at it and come to the conclusion that this is your jam. It targets a specific niche, and it’s competent enough that I think that it would satisfy that. However, if you’re hoping for anything deeper than that –  anything that might create a memorable experience – you’re not going to find it. Samurai Maiden is about as generic as it gets.