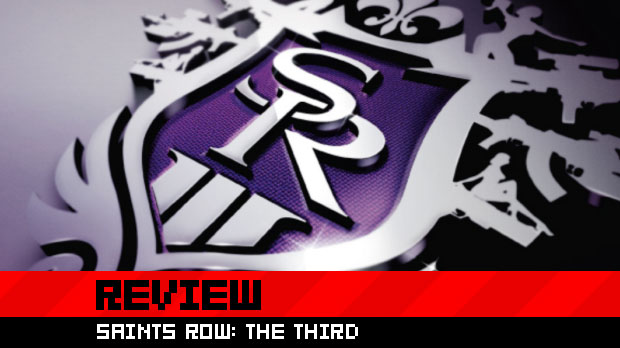 Saints Row 2 is one of my favorite games of this generation. Taking the silly violence of “Grand Theft Auto III trilogy“ and ramping it up to near-farcical degrees, Volition created a game that was like nothing else out there, despite resembling every other sandbox game on the surface.

One of its most compelling aspects was the playable role of an irredeemable villain whose sociopathic treatment of others made for a truly vile character. A real scumbag, yet one that we couldn’t help rooting for due to the sheer magnificence of his or her bloodthirsty antics. It was a game about being evil, and not in the pussyfooted way that other games present playable villainy. It was pure, malevolent, all-encompassing turpitude, and it was spitefully good fun.

Saints Row: The Third aims to top the outrageous behavior of the last game, and it certainly manages that in several ways. In a few others, however, it seems to have taken a drastic step back. 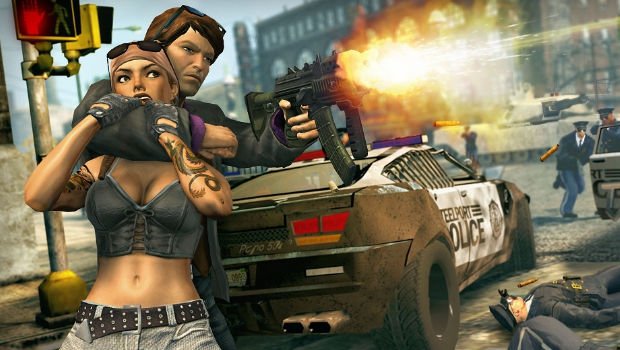 Saints Row: The Third is a game about extremes. It starts with a bank robbery gone wrong, its opening mission concluding with a one-man war against an entire SWAT team while swinging from a hijacked bank vault winched several hundred feet in the air. Soon after, players meet the sinister Syndicate crime ring and fight their way through a crashing airplane before blasting away criminals in the free-falling wreckage. All this happens before the player nabs a parachute and lands in the new city of Steelport. This slice of glorious stupidity is but an opening gambit to a game with one objective — to constantly outdo itself.

From giant dildo baseball bats to choking fart grenades, Volition has dedicated itself to creating a game that shamelessly treads a line between videogame and cartoon. Sometimes bordering on sci-fi as much as it does on gang-culture parody, Saints Row: The Third is a farce that never allows itself to be serious and boasts an attitude that must be applauded. The game can be genuinely hilarious at times, if only due to the increasingly absurd situations that The Saints find themselves in — situations delivered with such confidence (and amazingly well-placed backing music) that players will find themselves accepting the most ridiculous nonsense as perfectly reasonable.

Speaking of ridiculous, the character creation has mutated into a thing of pure madness. Players can craft all sorts of physical freaks, with oversized body parts, strange colored skin, and a variety of inane hairstyles. As usual, crossdressing and transgenderism is happily allowed, and creations can even be shared online via Saints Row’s new online community hub. Uploaded characters can be downloaded and utilized by any user, adding an intriguing social element to the experience.

Gameplay-wise, very little has changed outside of the variety of new and preposterous weaponry. As always, players embark on a range of missions in an open world, taking out gangsters, stealing things, and orchestrating mighty explosions. The mission structure has been streamlined, however, with stages now activated via a cellphone rather than manually opened on the map. Furthermore, players no longer need to replay “Activity” side-missions in order to open up the campaign. Story quests will be available as older ones are completed, with Activities now existing solely as a means to earn more cash and respect. 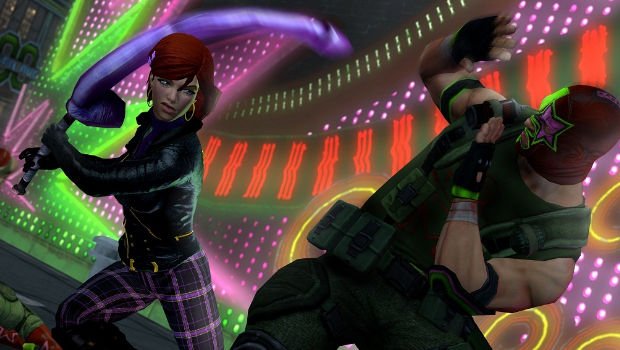 The “respect” meter that used to act as a barrier to story missions has transformed into a full-fledged experience system. As players rank up their respect, they will gain the opportunity to buy new upgrades for their character, gang, and vehicles. Such upgrades include increased health, more NPC allies, and more hourly income earned from purchased properties. It’s nice to see the respect system get a more engrossing overhaul, one that no longer annoys players by forcing them to indulge in mini-games.

However, the streamlining of the gameplay exposes one of The Third‘s biggest weakness: there’s really not a lot there — far less than the game tries to make one believe. With missions now easily accessible by phone and Activities no longer mandatory, the main campaign can be cleared in a matter of hours, and there’s really not a lot else going on in Steelport to draw attention away from the story. While there are optional missions such as assassinations and vehicle thefts (also activated on the cellphone), they tend to grow rather repetitive and uninteresting. Same goes for the Activities, which are mostly taken from previous games and thus feel a little tame by the standards the game itself attempts to set.

In fairness, there are some delightful new distractions. Tiger escort is an obvious standout, as players need to drive carefully around town while a wild tiger sits in the passenger seat. Driving too recklessly causes the animal to become angry and attack, which is extra challenging thanks to the unwieldy feline’s own clawing behavior. A new variant of Trailblazing is also tossed in, in which players ride Tron-inspired motorbikes across a virtual track, avoiding firewalls and collecting data dumps. These new Activities are fun, but not quite as inspired as previous ones, and quickly get old along with everything else.

Furthermore — and I hate to say this — Saints Row: The Third really isn’t as over-the-top and exciting as the last game was. Not at heart, anyway. While fart jars and fighter jets have forged a game that aesthetically appears crazier, the game’s overall attitude, narrative and atmosphere is practically neutered compared to Saints Row‘s last outing. The Boss of the Saints is no longer a psychotic villain, having been softened up and turned into a lame antihero who fights against characters far more despicable than he is. The rival gangs lack much in the way of defining personality, and once you get over the initial brief shock of seeing a man holding a giant purple penis, one realizes just how shallow and insincere the outrageousness actually is. Without the attitude to back it up, The Third‘s attempts at ludicrousness come off as cynical and forced, a far cry from the effortless inanity of the previous chapter. 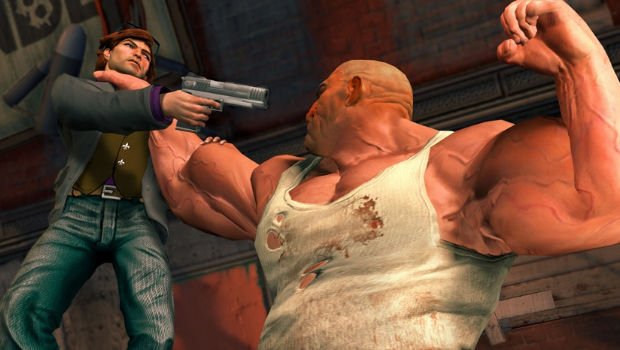 One of the best elements of Saints Row was watching the rival gangs slowly disintegrate thanks to the player’s vicious machinations, but that doesn’t happen in The Third. In fact, rival gangs barely factor into the game. Characters set up to be major villains are removed from the equation almost as quickly as they arrive, interesting factions such as the cyberpunk Deckers are dealt with in a handful of missions before quietly slinking off, and the urban warfare aspect is soon replaced by a borderline generic plot in which the Saints fight a boring military stereotype known as STAG. While players can perform wrestling moves on NPCs and summon air strikes, the environment in which all this madness takes place is mundane and bereft of the hyperactive atmosphere that The Third frantically attempts to manufacture.

The fun is damaged further by a range of increasingly irritating new enemies. Oversized Brute opponents constantly harass players with unstoppable charges and frequently intrude into otherwise intense combat situations, as do their flamethrower-wielding counterparts. Then there are the zombies that appear later in the game and constantly cause boring quick-time events to spawn over and over again — when they’re not simply swarming the player and impeding any sort of movement. These new enemies all look impressive, but they never positively reinforce the gameplay; they serve only to get in the way.

It doesn’t help that the game is incredibly disjointed, with a narrative that seems rushed and missions that barely have any rhyme or reason. One particular sequence in which the player is supposedly sold at a sex auction doesn’t feature the sex auction at all. The mission starts with a character telling us what is going to happen, then immediately cuts to the player character naked and drowsy on some sort of drug. There’s no explanation as to how the situation got this way. Apparently the mere concept was supposed to be entertaining enough. 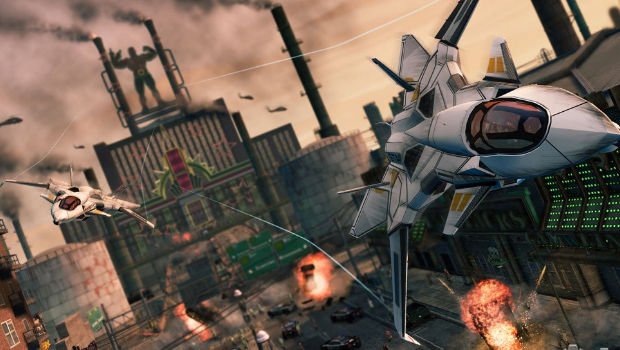 So desperate is The Third to get to its explosive setpieces that it forgot to pace itself, and that leads to a game that shoots its load before players are even warmed up. Mission objectives aren’t too varied and get infuriating once the STAG stereotypes appear with their irritating laser jets and tanks. Even worse is the fact that the majority of missions require players to keep various NPCs alive while contending with some of the worst AI seen this generation. Having to escort a character that doesn’t know how to walk around a fallen bit of debris is an incredibly common scenario, and one that gets no more pleasurable with repeated occurrences.

Competitive multiplayer has been axed in favor of focusing purely on co-op. Co-op has its own specific content although it’s really just more of the same with players able to wreak dual havoc in Steelport on a drop-in/drop-out basis. There’s also a standalone “Whored Mode” in which up to four players survive against waves of scantily clad women and other enemies. Each round has its own set of rules and restrictions, and while the mode is a decent distraction for a few minutes, it gets very old very quickly.

Make no mistake: when it wants to be, Saints Row: The Third is incredible. Parachuting into a penthouse party and committing a mass slaughter while Kanye West’s “Power” provides the backing track is one of the most empowering experiences I’ve had in a videogame. An inspiring wrestling boss battle — complete with ten-count corner punches and affected pain selling — is priceless. Unlocking new weapons and playing around with them is a great laugh until one gets tired of them. There’s a lot of merit to The Third, and its potential to inspire giggles is huge. Still, it strikes me as a game that doesn’t quite “get” what made Saints Row 2 so enjoyable, choosing to ramp up the extremity in the wrong areas and thus ignore those elements that truly needed attention.

Even worse, I fear the brevity of the campaign is a direct result of content being withheld so that the publisher can sell it digitally after the fact. THQ has made no secret that a year of DLC is in the works, and with three mission packages already in the works, it’s rather galling to think that the base product spits players out so swiftly. It just seems suspicious that the game is this depthless when compared to its previous installment, yet so much more DLC is at the ready. 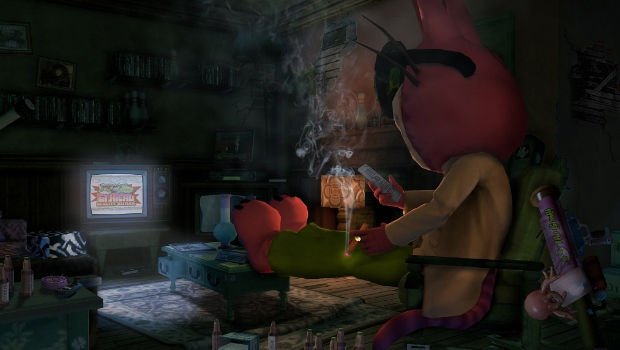 As a huge fan of the last game, I want to shout this sequel’s merits from the rooftops, but while the experience is often amusing and littered with some remarkable moments, I cannot help but feel a little let down by the final product. It’s still a good game at its core, but it’s not a patch on its predecessor, as it seems to have forgotten about Saints Row 2‘s achievements in its blinkered pursuit of extremity. It took me over two weeks to beat Saints Row 2, and I still wanted to stay in Stilwater. I concluded Saints Row: The Third in less than two days and feel no compulsion to return to Steelport anytime soon.

So it is that a game that aimed to be the most outrageous chapter of the series has ended up, if anything, as the least remarkable.

Looks like a (hopefully brief) site outage on our end. Hit up https://t.co/bxeSdiop in the meantime!