The Sacred series is never going to give Diablo a run for its money, but it’s always had its own unique charm. It’s a fairly standard dungeon crawler with its own element of silly humor, and that’s been enough to earn it a place in my heart. Given my fondness for Sacred, and my love of classic beat ’em ups, Sacred Citadel earned my attention from the outset.

Trading its roleplaying robes for a brawler’s tights, Citadel is a beat ’em up that, at least thematically, stays true to the series roots. Like its RPG precursors, Sacred Citadel is a game with its own sense of character, but clearly won’t be giving the best of the genre anything to sweat about.

Such is the Sacred way. 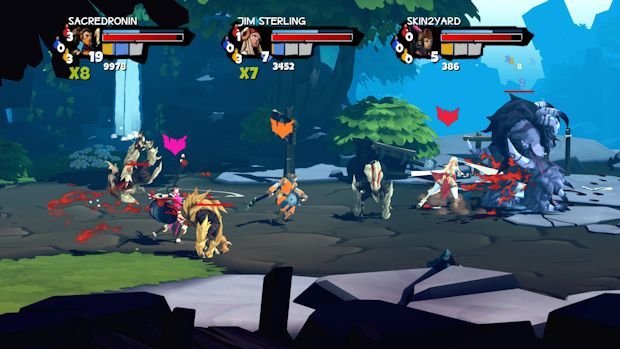 Sacred Citadel is an arcade-style beat ’em up that plays itself as straight as a die. You have a series of sidescrolling stages, waves of harassing enemies, and endless button-mashing slaughter. There’s a definite sense of nostalgia with Citadel, as it’s quite clearly inspired by SEGA’s Golden Axe series, with dash attacks, occasional monstrous mounts, and postmodern fantasy music.

There are four classes to choose from, each with their own unique special moves and strengths — the tank-like Warrior, buffing Shaman, dexterous Ranger and projectile-flinging Mage. Although each class has unique attacks, characters tend to play out in fairly similar styles — every class gets access to the same melee weapons, they all wield two weapons at once, and they generally all need to get up close and button mash their way to success for a good portion of the game. The major difference lies in their special offhand weapons, which provide character-specific charge attacks, but even then, they all follow the same formula — giving everybody a long-range move, a juggle, and a ground slam.

The game’s four acts (or five if you bought the launch day content) play out in pretty much the same way. You carve a path from left to right, pick up gold and the occasional weapon/armor drop, then fight some sort of large boss creature. Players can both block and dodge, and PC users are advised to wield a controller, as trying to make use of defensive maneuvers on the keyboard just doesn’t feel right. Attacking enemies fills three power meters, which unleash one of three powerful attacks depending on how many of the square are filled — another nice little nod to Golden Axe.

Characters level up, and are able to spend skill points on Attack, Defense, Dexterity and Power. A town can also be visited between stages, to buy extra gear, equip temporary stat-boosting crystals, or place a bet with a townsperson, pledging to beat the next stage under some sort of restriction in exchange for a cash prize. 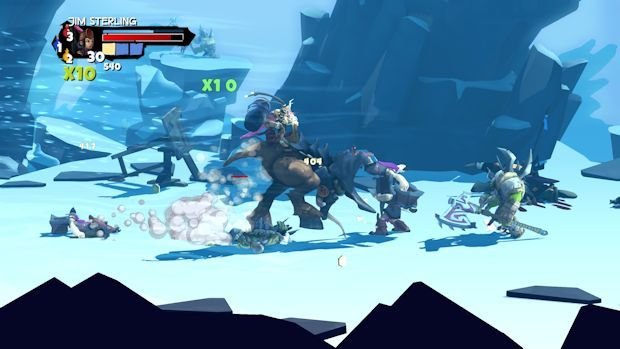 Sacred Citadel offers a fairly basic little beat ’em up game that doesn’t really do anything extraordinary, but doesn’t demand much either. You go in, you kill stuff, you move on. It’s serviceable, but it lacks the sense of scale and energy that something like Castle Crashers had. Combat feels a little unresponsive, and attacks lack the kind of satisfying heft one comes to expect from a good brawler. Charge attacks are generally slow and leave one open to attack, while enemies love juggling you, knocking you around, and scoring a cheap hit as soon as you recover from an attack. Citadel‘s not a particularly hard game, but it’s a frustrating one, especially when playing solo, as enemies adore not letting you pull off any moves.

Up to three players can fight together, either locally or cooperatively, though as I said, there doesn’t seem to be much of an active player base right now. I managed to find a few games on launch day, but the next day saw me unable to get into a single game. Even when games were available, it would tell me I was unable to join. Once I got in, things worked perfectly fine, though the benefit of enemies having more targets to thin out their attention is countered somewhat by an overwhelming visual chaos. 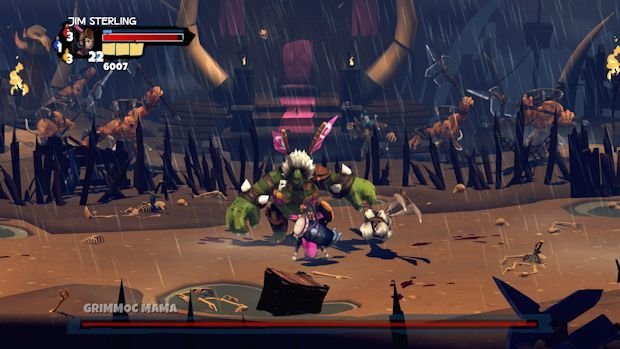 The game looks pretty good, although the in-game menu tops out at a nasty resolution of 1600×900. I had to go into the configuration file to fix this, and even then, while it made the game look nicer, it did stretch things to the point where dialog text’s cut off at either side. That complaint aside, Citadel offers a very pretty and colorful adventure, with a great cartoon look and some fantastic character designs. The environments are bold and contrasting, giving the game a real sense of style that’s hammered home with the delightful soundtrack. Don’t let the dubstep in the game’s menu fool you — the tunes playing throughout the game are incredibly catchy.

A nice presentation helps make things a little more interesting, but there’s still no escaping the fact that Sacred Citadel fails to inspire much passion. It’s an okay game, a solid arcade throwback, but it’s a mere face in a crowd and doesn’t stand out very much. It’ll give you five or so hours of satisfactory action, dishing out amusement and annoyance at varying points, and while I think it’s worth checking out for Sacred fans, most brawler connoisseurs would be better off sticking with the classics.