Taking the action and RPG out of an ARPG

The specter of Diablo looms large over the action-RPG genre; most games borrow heavily from Blizzard’s seminal game and those games’ success is usually judged on how close they stick to the formula and how well they execute on that.

While it’s tempting to praise a game for breaking away from some of the genre’s conventions in order to make itself stand out from the crowd, Sacred 3 has stripped away so many of the things that make an APRG fun. Stats? Pretty much gone. Loot? Almost none. A really enjoyable combat system? Nope. 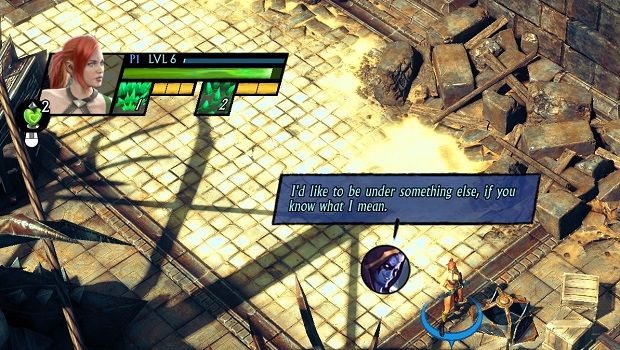 Where to begin? Let’s start with the story that has the Dark Elf lord Zane invading the peaceful region of Arcania where a sacred artifact is held. Standing in his way are a band of heroes who are committed to foiling his plans, along with a powerful telepath Aria. It’s all fairly standard fantasy stuff but there’s a real disconnect between the fantasy trope of invading dark army/plucky band of unique heroes and the tone of how it all plays out.

From the chirpy voice over to the silly dialog that robs villains of any sense of dread or malevolence, Sacred 3 seems to be in search of whether to play it straight or not. The first few levels have your hero chasing Karr Tel, a pirate and slaver who is evil enough to destroy an entire city but silly enough to taunt you about how bad scurvy is. One character even uses the term “noob.

There are four heroes to choose from: Claire the Seraphim, a swift swordswoman; Alithea the Lancer, a ranged warrior; Marak the Safari, a tough tank class; and Vajra the Archer who deals in ranged damage. All the classes do handle slightly differently but you’ll spend a good deal of your time left clicking on things until they die or blow up, which is what you’d expect from an action-RPG.

You are, however, limited to just a two supplemental attacks — one light and one heavy. As you unlock them by progressing through the game, each hero will have three or four to select from but progression is really slow; to fully unlock one of Alithea’s starting skills (which only has four levels), you’ll need to progress to level 33 which is a real slog. Gating progression is expected but usually there’s plenty of leeway in customizing your character’s skills and talents; in Sacred 3, you’re really only presented with a single option every time you level up.

What’s also missing is all the sweet loot that you’d normally crave. Weapons are dished out at the end of a level but you’re left with one main weapon for an entire mission. Having limited weapons does mean that they all feel slightly distinctive, and picking one for an entire mission means you have time to get used to it, but there’s a lack of weight to the combat.

Some bonuses that are bestowed by captured spirits can buff certain attacks and do make a difference and it’s neat that there are bonuses and penalties that will affect your character and party, so there’s room for some customization. Like a lot of games, there’s more enjoyment to be had here in co-op, especially if there’s some good cooperation between players as to controlling large groups of enemies and targeting specific champions.

It’s a shame that for every good thing that game does, there’s two or three things dragging it down. The charge-up gust that’s mapped to the right mouse button is a great addition as allows you to break enemy shields, disrupt traps, and knock over smaller enemies but aiming is done with the mouse so you have to constantly adjust your character’s position with the keyboard. The dodge command is mapped to the space bar but again, you’ll dodge in the direction the mouse cursor is pointing. This does take a lot of getting used to and once you get the hang of it, you’ll be able to zip round the battlefield.  Playing with a controller works just fine as an alternative rather than using the WASD keys for movement. 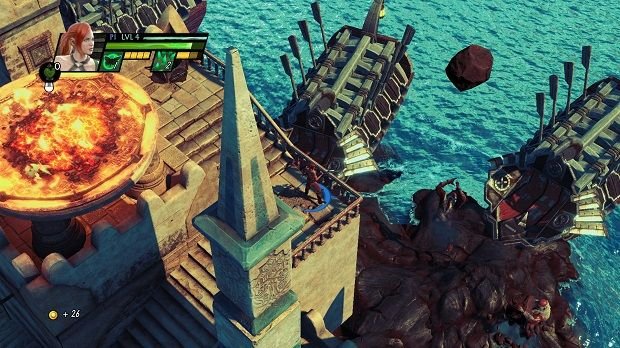 Visually, the game does a decent job of presenting itself. Shown mainly from an isometric viewpoint, the character models are distinct but there’s plenty of times when there’s so much happening it’s hard to make out how many enemies you’re facing.

There’s a nice scale to the levels — these aren’t your dank dungeons as most are happening outside during the daylight. Occasionally, the camera will shift to an alternate angle. There’s an impressive amount of things happening on lower levels, like trolls tossing rocks at a city or a mass jailbreak happening. The character design is so-so but it’s fairly easy to tell each hero apart on the battlefield when you’re playing co-op.

As I mentioned earlier, it seems churlish to criticize Sacred 3 for breaking away from the series’ APRG roots but the problem is that there’s nothing that quite fills the gap of leveling up your character or voraciously guzzling loot drops. For all its streamlining of the leveling systems and loot, Sacred 3 just feels lightweight and simplistic. That’s not even mentioning the flat attempts at humor and some crude jokes that you’ll be putting up with in the early levels.

As it stands, Sacred 3 feels distinctly average. The game works well enough at what it presents and is largely annoyance-free (though the checkpointing system could be better and I had a save-game issue where my progress wasn’t saved from one session to another) but there’s better and more rewarding games out there right now that you should seek out first.