Oh hey, didn’t notice you there: I was too busy picking up my Sackboy: A Big Adventure co-op partner (read: my wife) and throwing her into the abyss.

How did everything go after that was all said and done? Pretty good actually! 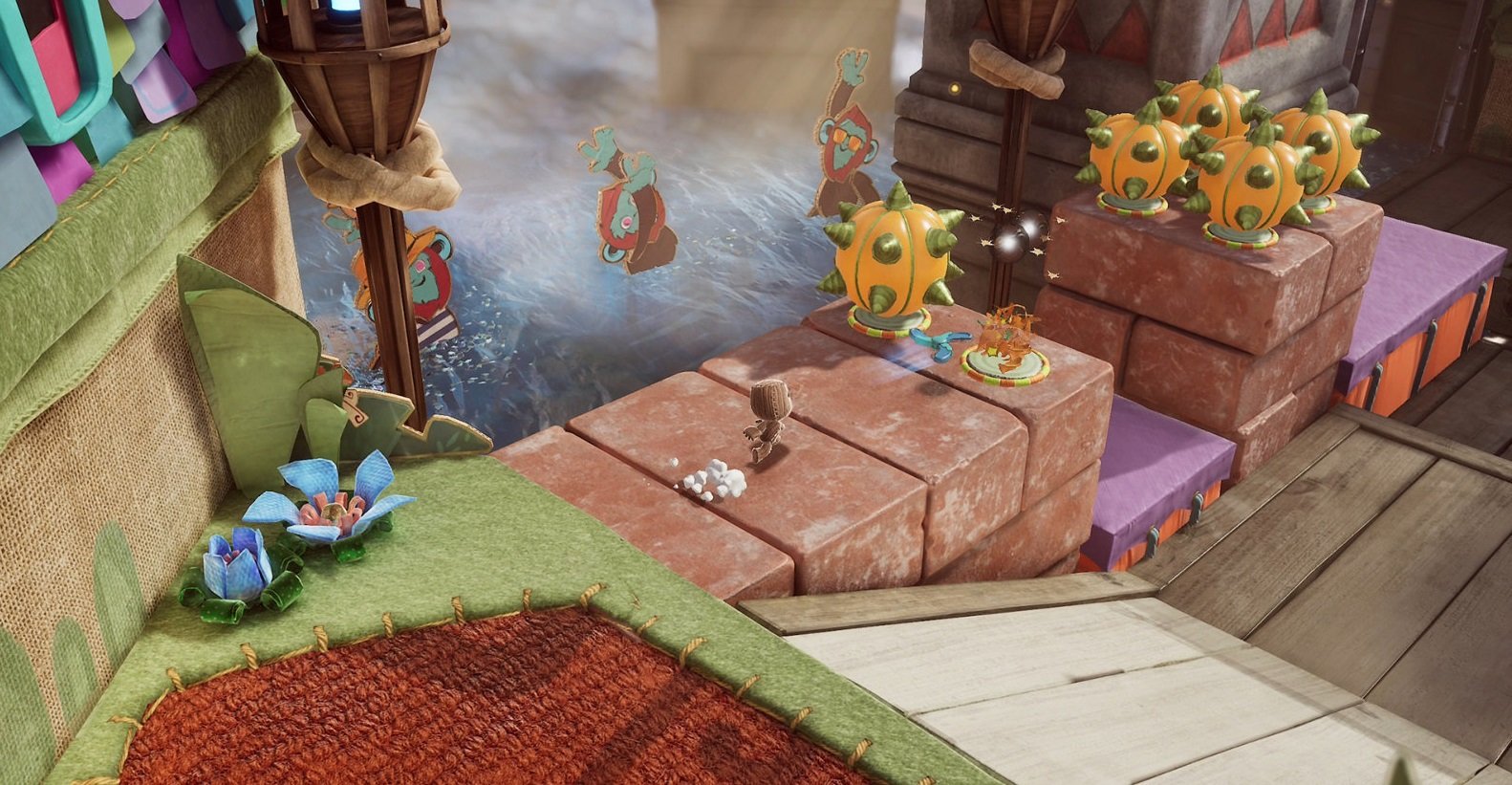 The last time we checked into A Big Adventure I was enjoying myself, and not much has changed since then. We’re entering a new renaissance of sorts of cute mascot platformers, with tons of games like Lucky’s Tale entering the fray. Heck, Crash Bandicoot even came back. If you have an idea for a cute character, now is the time to strike.

Sackboy: A Big Adventure breathes new life into the world of LittleBigPlanet in an endearing and non-cloying way. There’s more of a narrative now, as Sackboy squares off against the evil Vex: who is hell-bent on subjugating Sackboy’s kin and twisting the adorable sackworld into his own vision. Vex doesn’t just come at the start and leave until the end either, as he makes his presence known throughout.

The campaign also introduces you to some great supporting characters, a few of which try to add a little allure and lore to the universe that you may have come to love over the past decade-plus. Skippable level intros are the best, as they allow you to get as little or as much as you want out of the narrative. If you want everyone to shut up and just grab some collectibles, you can do that.

Sackboy: A Big Adventure is what I’d classify as a “chill platformer”: so, perfect for 2020. In one level, you race along a level that’s tweaked to trigger bounces and bumps to the tune of Bruno Mars’ “Uptown Funk” (my immediate reaction: an audible “WHAT?!”). A few stages later you’ll come across the queen of the monkeys, who won’t stop talking about “banana exports.” LittleBigPlanet has always been sort of weird, but Big Adventure takes that to the next level.

Themes range from “ah that was cute” to the exciting musical journeys above, but at no point does the game feel like a chore. The physics, like most LBP joints, might take some getting used to. Mechanically, the platforming is up to snuff; just responsive enough to not being annoying. You can jump, punch, roll, and grab: the latter of which is responsible for quite a few interactions that dictate how successfully you pull off a lot of sections. 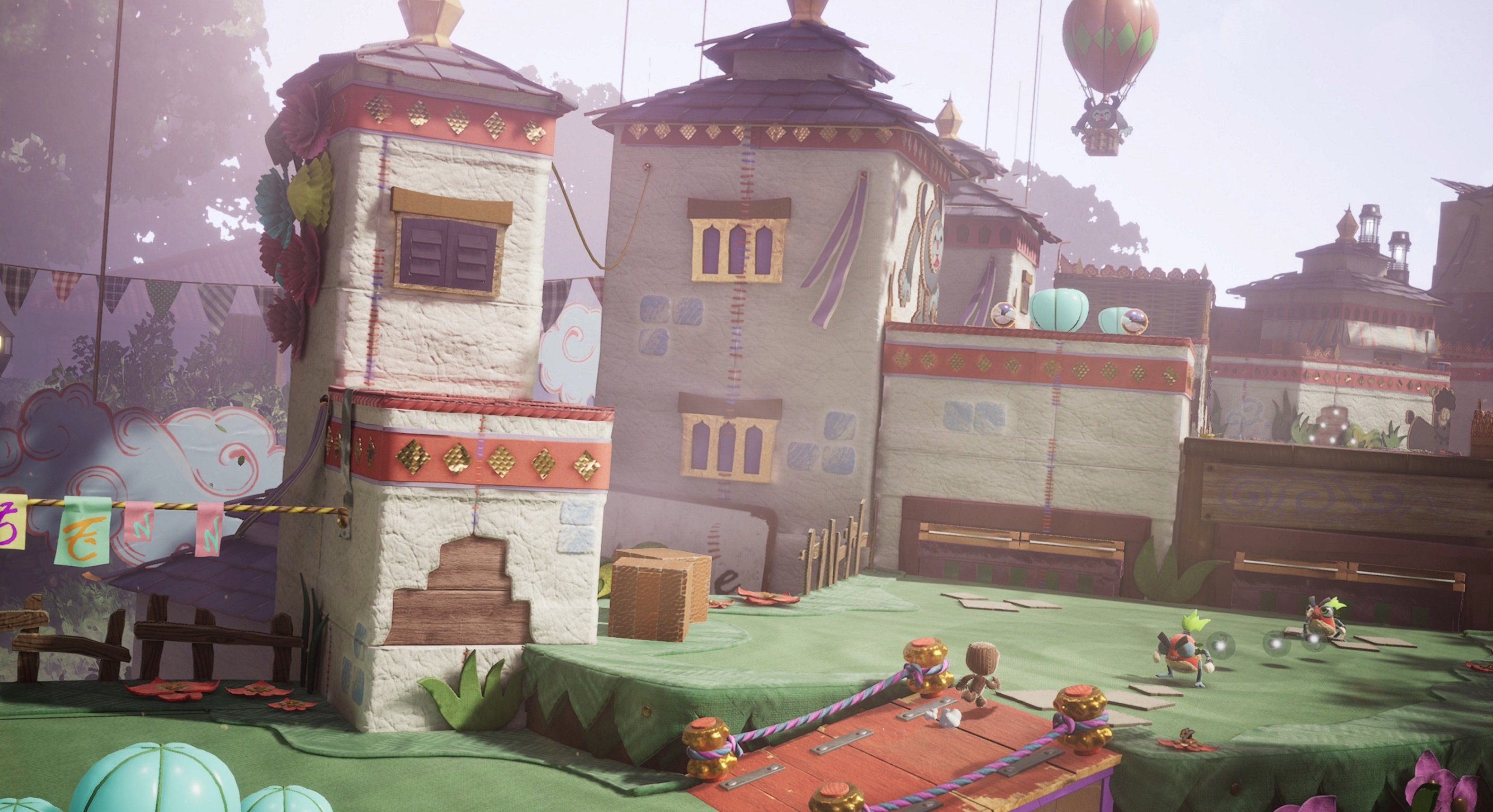 What is annoying is the level gating, which asks players to earn a certain number of orbs (a collectible) from stages before they can “finish” a map. It’s not a deal-breaker per se, but if you’re rushing through (or genuinely can’t find a few orbs), you might need to go back to a previous stage. I’ve played through games where this concept was egregious and clearly designed to pad out a campaign, and this isn’t it.

That campaign is all you’re getting, by the way, as Sackboy: A Big Adventure doesn’t have a creation tool like a proper LittleBigPlanet title. A commenter in our review-in-progress mentioned that they didn’t even touch the creation tools in the past and favored the main storyline: a sentiment I can get down with after seeing how rewarding this game can be. There’s a lot to scour for here, so you’ll be busy for a while if you go for a 100% rating.

Bring your family and friends into your Sackboy: A Big Adventure playthrough and have a blast. Or play by yourself. It doesn’t really matter, as Sumo Digital has once again tapped into the essence of what makes this series so special. It’s innocent, it’s fun, and it feels unique. We need more games like it, even if they don’t push the genre forward…which is by no means a requirement.

Filed under... #Sackboy: A Big Adventure