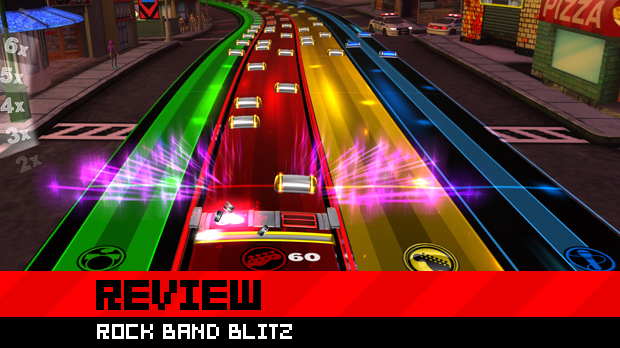 In Rock Band Blitz, players race down a highway through the middle of the neon-obsessed Rock City. Each stage is based on the note charts of a song selected by the player, with each lane representing a different instrument and note “gems” which move toward the player’s location at the bottom of the screen from the horizon. The player earns points for successfully timing button presses to when these notes strike the bottom of the lane they currently occupy.

This concept will be instantly familiar to anyone who’s played an instrument-based rhythm game in the last five years. But rather than individual players focusing on specific instruments, Blitz puts the entire song in front of one player and gives them the freedom to hop from one instrument track to the next, with the goal being to score as many points as possible. And you can forget about those bulky peripherals, as Blitz is played entirely with a standard controller.

If all of this sounds a lot like Rock Band Unplugged (or earlier Harmonix titles FreQuency and Amplitude), that’s a fair assessment, but Blitz is designed as a much more accessible game than earlier efforts in this style of design. Each track only features a left and right note to play, players cannot “fail” a song through poor performance, and even low scores are compensated with some rewards. That may rub some longtime fans the wrong way, but these simplified elements, when combined with Blitz‘s power-up and scoring systems, comprise a nuanced game as much about strategy as it is accuracy and timing.

It’s not enough to just hit the notes in a single lane. As notes are hit, the current track will begin to fill with color at increments, each time increasing a multiplier applied to all further notes played on that lane. Once it is completely filled, the multiplier can increase no further until the player hits one of several checkpoints in a song. Crossing a checkpoint will drain the color out of all tracks simultaneously until at least one is empty, enabling the increase of multipliers to new and greater heights.

For the player, this means constantly hopping from one track to the next, trying not only to hit the maximum number of notes but to consistently spread efforts across the entirety of the song to maximize the value of those notes. Further adding to that frantic energy (and to the potential score) is “Blitz Mode.” Entered by playing flawlessly for a short while, Blitz Mode adds some slightly disorienting blur effects which make the track feel as though it’s moving significantly faster while at the same time awarding increasingly greater point bonuses at intervals. 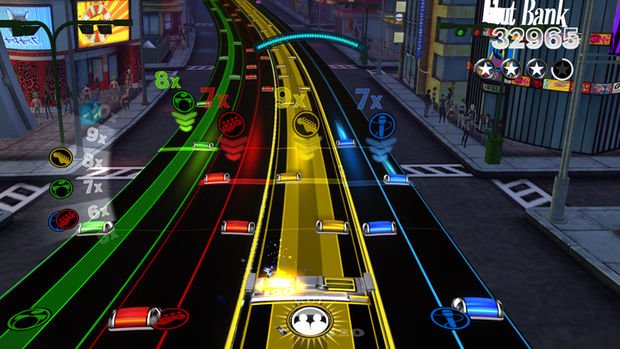 Completing a stage comes with three kinds of awards based on player performance: Stars, Cred, and Coins. Stars and Cred are experience systems. The former are awarded based on total score and range from 1-5, or gold stars (which, for the purposes of scoring, counts as a sixth star). Cred accumulates in small quantities, pooled from performance on individual instruments and earning it unlocks new power-ups. Coins are an in-game currency system used to then purchase unlocked power-ups before stages begin, awarded based on the number of stars earned and the overall difficulty of a stage.

Power-ups are absolutely critical to earning high scores and can often more than double the points a player gets when used effectively. Three types of power-ups exist, each functioning differently. “Overdrive” powers are enabled by playing special white notes and directly activated by the player to destroy additional notes, boost multipliers, or just earn bonus points. “Note” power-ups appear as purple notes during a level and represent an element of luck in Blitz‘s scoring system, with their locations appearing in different locations on every play. Finally, “Track” power-ups provide bonus points for specific instrument tracks or as a way to earn bonus points by switching at the right time.

Players can start a level with one power-up of each type, with each power-up selected coming at a cost of Coins. Some combinations of power-ups complement each other, while others can actually make things more difficult. It’s up to the player to find combinations which work well for individual songs as well as suit their own skill and style. They absolutely make the game, in terms of fun factor and strategic depth. The purple note power-ups in particular add a welcome bit of chaos, keeping the player constantly on the lookout for opportunities to score and giving some hope that it’s possible to squeeze a few more points out of a stage through a combination of skill and sheer good fortune. 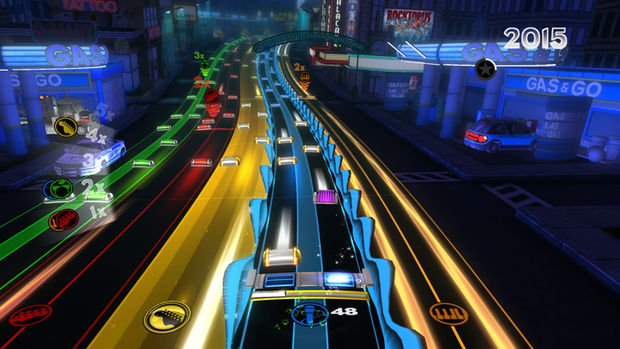 All of these elements combine to create an addictive, fast-paced, and challenging game. It also, by virtue of its mechanics, has a most interesting balance in terms of compensating for less skilled players while putting the screws to the hardcore at the same time. The range of acceptable timing for hitting notes feels rather broad, which is great for the newcomer who may struggle for a little bit. That same range is downright punishing once you have the hang of managing multiple lanes, as (for the purposes of accuracy) the game determines that if you can hit a note, you must hit the note. It’s very easy to hop to a neighboring track, expecting to slide between notes, and be penalized for missing one which is just barely playable. This can make all the difference when it comes to maintaining Blitz Mode or amassing big points with the Jackpot Overdrive power-up, making risky moves all the more exciting to attempt.

There’s a nice, broad selection of rock music sub-genres found in the twenty-five songs included with the game, if a little heavily weighted toward modern music (forty percent of the tracks in Blitz are from 2010 or later). Every included song is genuinely fun to play, but they’re merely the tip of the iceberg when considering that the game supports the several thousand imported or downloadable songs already compatible with Rock Band 3. It’s a fantastic way to not only breathe new life into a languishing collection of content, but also appreciate many songs in a different way and give more value to imported tracks the player might otherwise not play in the original, peripheral-based game. Additionally, all the tracks in Rock Band Blitz are also compatible with Rock Band 3.

Rock Band Blitz can be a bit of an isolating experience, especially in comparison to other Harmonix titles (such as Rock Band or Dance Central) which encourage an infectiously fun, party atmosphere. With those games, a significant amount of enjoyment can be derived from simply being with people while they play but there’s nothing interesting to watch (on-screen or off) when Blitz is being played. The game has too many nuances to be quickly explained to a casual observer and the scrolling background of Rock City isn’t really exciting. Other people in the room are probably going to be bored. 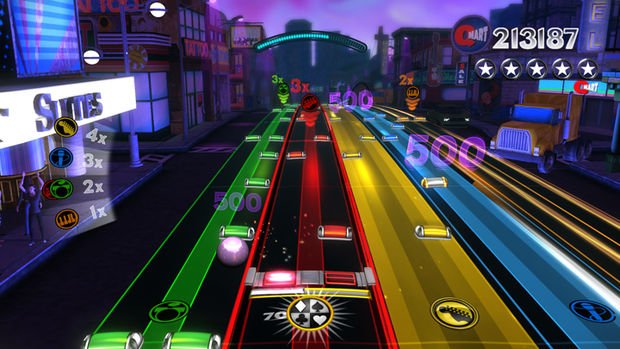 Which isn’t to say that Blitz is anti-social. It’s merely asynchronous in its social elements, relying on a new Facebook app, Rock Band World, to promote a sense of community. Linking a Gamertag or PSN ID to a Facebook account through Rock Band World allows a Blitz player to participate in “Goals,” secondary objectives which can be attempted alone or in a group with others. You can also initiate competitive “Score Wars” against other players, track statistics, recommend new artists for addition to the game, and add new music to a shopping cart for easy purchase when you’re back at your console.

Rock Band World is a bit of a mixed bag. While one might think this would allow for top-level integration of the PS3 and Xbox 360 communities for Rock Band, the reality is more limited than that. Players can only participate in Goals together across platforms, with Score Wars limited to Facebook friends who are playing on the same console. But the Goals are an enjoyable addition, offering a way to bolster coin supplies with star objectives ranging from simple to extremely difficult and “Scavenger Hunt” puzzles which task players with playing specific songs in the Rock Band library, guided only by clues. New Goals are planned to arrive in the app on a regular basis and completing them often necessitates having a lot of content available to play with, so there are advantages to teaming up with people in the app.

Conversely, Score Wars give players a week to post their best score on a specified track, in direct competition with another player, with the winner earning a big chunk of coins and bragging rights. In a fiendish design move, players can post messages to their opponent’s wall whenever they’re ahead with two quick clicks in the browser. Getting one of these brags can be downright shocking sometimes when an opponent unexpectedly topples a score with a difference of six figures, but it also creates a sense of attainability towards that high total. 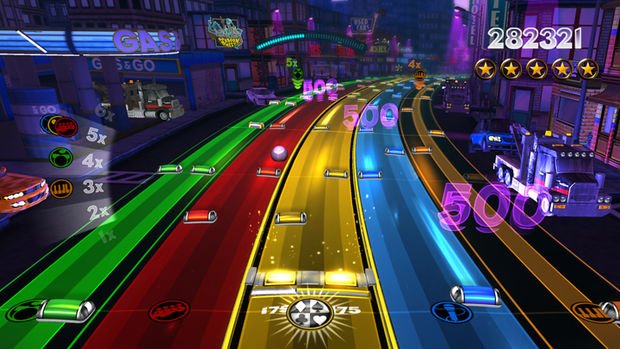 Between the trash talking and head-to-head nature, Score Wars are easily the most fun you’ll have playing Blitz. The problem is that they’re also only really functional with Rock Band World integration and this marks the greatest shortcoming found in Blitz. Without enabling this feature, the only way to initiate Score Wars is through the “Recommended” tab found in the game’s menus, which will helpfully suggest a person and song to engage, but doesn’t offer any means of specifying an individual player or song. People who opt out of using Facebook will likely be frustrated by these limitations.

Rock Band Blitz isn’t going to change the world, with its appeal as a game likely limited to a niche market of dedicated rhythm game players, but it is fantastically fun to play and features considerable complexity. Critics who may have been skeptical of whether or not the game would be challenging or enjoyable with its simplified two-note design (as compared to prior Harmonix beat-matching titles) should find that there’s still a ton of difficulty potential and a design that encourages players to experiment with a great variety of scoring methods. For those who enjoy beating down their friends in score-based challenges, the Score Wars feature alone will provide an endless amount of fun.