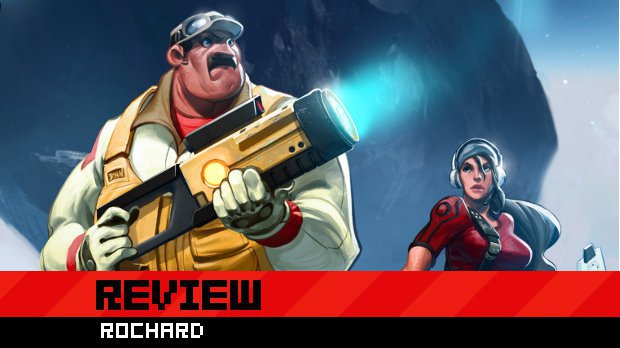 Side-scrollers, while they still exist, have mostly become indie fare recently while larger companies focus on different genres. Enter Rochard, a side-scrolling physics platformer/puzzler that combines a slightly twisted sense of humor with some genuinely entertaining gameplay, both of which help to distinguish this title from the rest in this category.

While Rochard may not be my game of the year, it does a lot right, and proves that side-scrollers are not dead, or even dying. They are alive and well, and now include redneck miners in space. 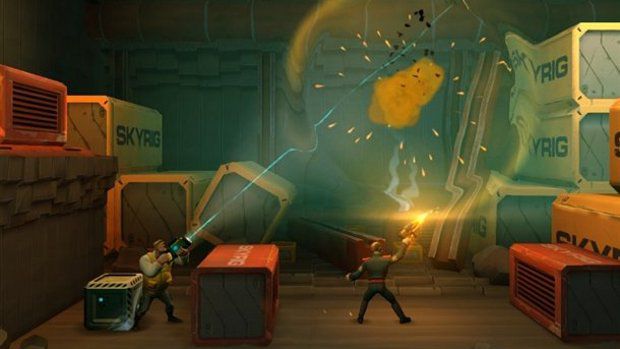 The game follows John Rochard, an unassuming redneck who makes a living mining asteroids with his crew, an old mechanic named Zander and the sassy techie Skyler. Its a good thing they excel at being heroes, because they are terrible at mining. As the game starts you find out that Rochard and company are about to be sacked because they are costing their company, Skyrig, more money than they’re worth. Their boss, Maximillian gives Rochard an ultimatum; find something worth money, or pack up and get out. So the group finds a ruin. In an asteroid.

Gameplay starts by introducing you to the basic mechanics and, more importantly, the G-lifter, a multi-function gun that will eventually allow you to lift and throw heavy objects, lower gravity, shoot bullets, grapple and throw grenades. That, combined with color-coded energy shields make for some interesting puzzles. The further you get into the game the more intricate puzzle combinations get. At one point I was running around reversing gravity (that is something else that happens, walking on the ceiling), lowering gravity, using the G-lifter to pick up large crates and dodging enemy gunfire.

Besides the G-lifter, there is one other gameplay mechanic at work that helps the bring variety and challenge to the puzzles and platforming: energy shields. There are a few different types, and each has a specific purpose. Blue and red shields block inorganic and organic matter respectively, yellow act as shields against energy (bullets or lasers) while white block everything. Although use of these shields can sometimes lead to frustration (see below), there are other times that they can provide unique solutions to defeating enemies or avoiding death. On more than one occasion I was able to remove the red shield under a guard, causing him to plummet to his death, or put up a white or yellow shield to avoid laser or enemy fire. The only thing more satisfying than dropping a guard onto an electrified bit of ground was solving some of the puzzles. 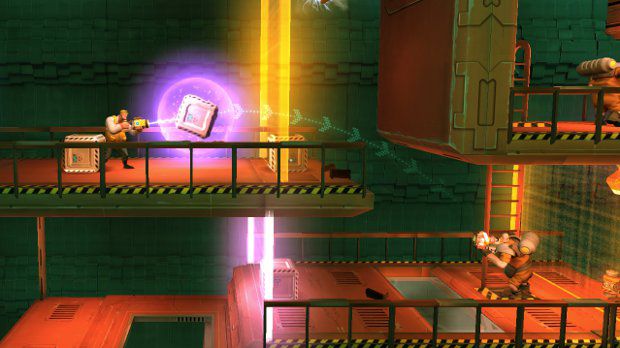 Not all of the puzzles were fun, however, and there were some that felt rather obtuse. While none of them were ever so hard I couldn’t figure them out, there was a time or two when solving them did not bring a sense of satisfaction, only an annoyed feeling of ‘about time’. For example, during one puzzle I was required to move an object from one room to another, which sounds easy, except that a blue object-blocking shield prevented me from just taking it to the other room. Due to the camera angle I missed the small hole above the door with no shield, which I could throw the object through. It wasn’t until I moved to a different part of the room that I even noticed the gap. Small tricks like that were not always present in puzzles, but when they were it felt as though the developers were using sleight of hand to compensate for a lack of an actual challenge.

Despite my frustration with some of the puzzles, most were entertaining with some of my favorites showing up later in the game. Using the G-lifter and pulling either the top or bottom of a laser, I was able to change the angle at which it fired and while the lasers were not new, the approach to these puzzles were. They were in small, one floor, rooms and all that was required of me was moving the lasers in a way that would give me a path out. These were not flashy, or complex. They did not require a bunch of objects thrown or pulled or dropped, and I found them delightful because of that simplicity.

While my feelings on the puzzles were occasionally less than enthusiastic, none of them ever brought the sheer level of irritation I experienced with some of the enemy encounters. For the most part killing enemies was fun and even amusing (when you knock them out, they will scream funny little lines) but there were times when, in Contra fashion, I died again and again and again. Some of you may love that sort of encounter; I did not. Besides the fact that enemies could see me before they were even on screen, and thus shoot — and often kill — me before I even knew where they were, there were times where four or five enemies were thrown at me all at once. This might not sound like many but Rochard is not a space marine and dies fairly quickly, which meant that even if I took out one or two targets, chances are I would die and have to repeat the entire section over again. This wouldn’t have been an issue if combat was always difficult, but for the most part it was fairly easy to get past enemies. As with some of the puzzles the more difficult combat felt more like a cheap shot than an actual challenge. 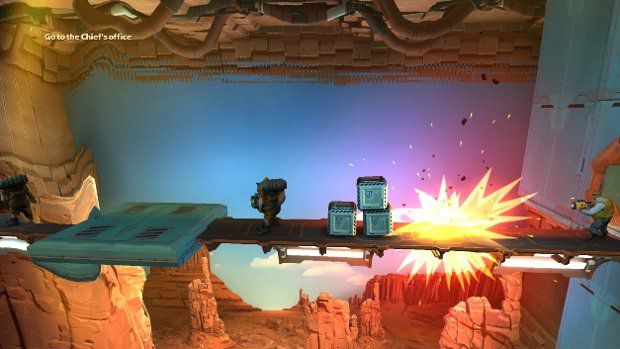 Repeating areas might not have been so bad, but the sections between checkpoints were sometimes rather large, as was the case later on in the game when I had to complete two areas in one section, both filled with enemies. During this section it became more a matter of route memorization than figuring out unique or creative ways to take out the bad dudes. By the time I completed that part of the game I was not thrilled or triumphant that I was victorious over my foes, I was just ready to move on. I will give the devs credit though, since as the game progressed I was given more powerful upgrades on the G-lifter to help me take down enemies, as well as upgrades for health, weapons fire and grenade capacity. Even if the encounters were aggravating at times, I never felt under prepared as far as weapons and ammunition went.

One of my favorite aspects of Rochard was the level design. The entire game is broken into five levels, all of which are on space stations. Despite the potential to reuse the same environments, each of the levels has its own character and personality, and I never felt bored with the look and feel of the areas I was running around in. Each level has its own theme and color palette, and none of them were bland or dull. The cartoony feel of the game, combined with the vibrant colors kept the environments from feeling stale or uninteresting. It would have been easy, and probably cheaper, for the team at Recoil to recycle some of the areas — especially since you will revisit one of the sections — but they didn’t, and I applaud them for that. 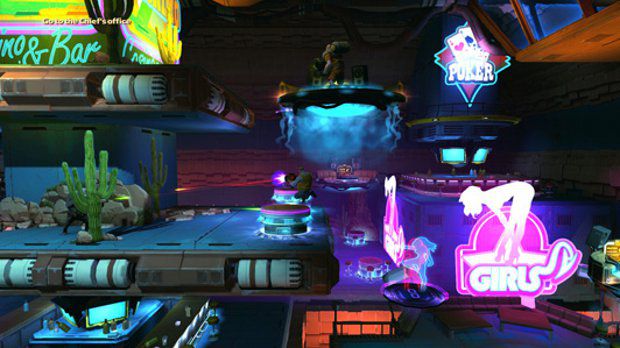 The story was also fairly unique, if not a bit strange. What seems like a straightforward problem becomes more deep and odd the further in I went, and there were even hints of a larger conspiracy. Sadly a lot of the questions and ideas brought up during the course of the game were never fully explained, and at the end I was left with more questions than I had answers to. I hope all these unanswered questions means a sequel, otherwise it is just a slightly confusing and unfinished premise.

All in all, Rochard is a solid game with a few frustrating flaws, which are not big or bad enough to topple my appreciation for what Recoil Games did here. It isn’t a terribly long game compared to the 40+ hours I normally spend on a title, and took me about 10-12 hours to beat, but for the price they’re asking that isn’t a bad deal. There is even a trophy for beating the game in three hours or less (something you will almost certainly need to do a second runthrough for) which adds replay value. I think it is a testament to the quality of the game that, despite how frustrated certain areas made me, I would absolutely not mind sitting down and replaying it. Rochard is a solid title with more going in its favor than going against it and I hope to see a sequel that builds upon all the good things the developers did here.