Robot Unicorn Attack will forever hold a special place in my heart. I remember PAX East 2010, meeting many Dtoiders for the first time, and joining a rousing drunken chorus of Erasure’s “Always” in the late hours of the evening. I have an auto-runner Flash game featuring the heavenly music of a British synthpop band to thank for that.

Publisher Adult Swim Games knew it had a hit on its hand and did what any company in possession of a deliriously hot property would do: rehash the mother-loving piss out of it. There are no less than five variants of Robot Unicorn Attack on the Adult Swim game portal, each identical to the original aside from a graphical re-skin and other infinitesimal changes. It became the Oreo cookie of browser games, re-surfacing every few months with a different seasonal creme filling color (yeah, I know distinct Oreo creme flavors exist, but I’m trying to make a point here).

Robot Unicorn Attack 2 takes that famous Oreo flavor and makes a slamming Oreo milkshake, a concoction far greater than the sum of its parts. All the fun, all the magic, all the sugary sweetness, all the dolphins, now as a frosty beverage! 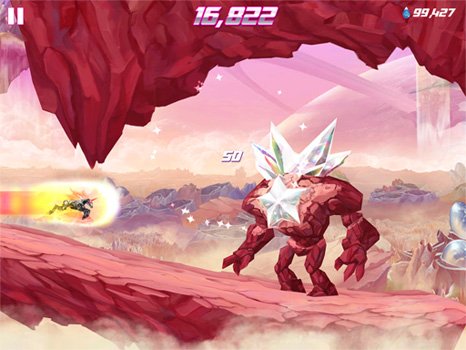 I know there are, like, two or three of you who have never played Robot Unicorn Attack before. If you are aware of any such persons, I ask you to point them out to the rest of the class so that we may shed a tear in their name. You poor, unfortunate souls. Have you ever known true joy?

On a fundamental level, RUA2 is just like its brethren. In control of the titular unicorn, you race across a whimsical landscape, jumping over chasms and dashing through star pillars, riding a high so blissful that the very air around you feels like a warm pillow of sunshine. If you aren’t smiling 30 seconds in, you might have lost the ability to dream, and for that, you have my pity.

This time, the world is packed with even more child-like fantasy — giant unicorn whales that swim through the air, spectacular palaces that lie beneath the glow of nearby planets, and, of course, dolphins! Half the experience is the rich atmosphere, polished and perfected to the point that the previous games feel so bland and inadequate in comparison.

Though you still control your unicorn by tapping the screen, so much has been tweaked beneath the surface to make the action more fluid and to invite light exploration. Similar to Sonic the Hedgehog, there are multiple paths through the stage, each with a different set of obstacles and spoils. You can risk diving into the abyss, praying that you land on solid ground, or you can leap towards the clouds, hoping that a higher plane awaits. Furthermore, the level layout changes daily, so there will always be new secrets to discover.

Taking a cue from other runners like Temple Run and Jetpack Joyride, there are challenges to attempt, and clearing a set of such challenges — jumping through a certain number of rings, collecting fairies floating along your path, etc. — will increase your rank and unlock new abilities, items, menu options, and even a second environment: the Ice World. Then there are daily challenges with tougher requirements, plus community challenges that rely on the combined force of every RUA2 player on Earth. 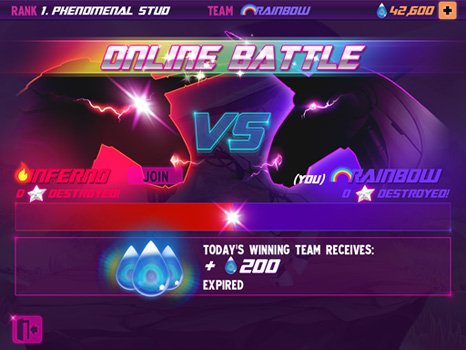 That sense of community also extends towards daily competitions, in which you must align yourself with either Team Rainbow or Team Inferno for a shot at big rewards. Everyone on your team must work together to achieve a specified goal, but if you feel like your team is heading towards a downfall, you can defect to the other side — at the cost of your precious teardrops, of course.

Those teardrops can be used to purchase different parts for you unicorn, such as a new mane, a new horn, or an entirely new body. You can stick with the standard unicorn model, become the sinister Iron Pegasus, or assume far more frightening forms. These customizations aren’t just for show, as they grant enhancements like increased speed, additional mid-air jumps, or even the game-changing ability of unlimited flight!

The two default songs, one for each world, were produced by New Zealand artist Module, responsible for the incredible soundtrack to Shatter on PlayStation Network. But what happened to “Always”? It’s still here, unlockable from a music room along with other wonderful jams like Blind Guardian’s “Battlefield” (from RUA Heavy Metal) and Limahl’s “The NeverEnding Story.” As these are licensed tracks, you’ll have to pay real money for their inclusion, but at least they are a sensible $0.99 apiece. 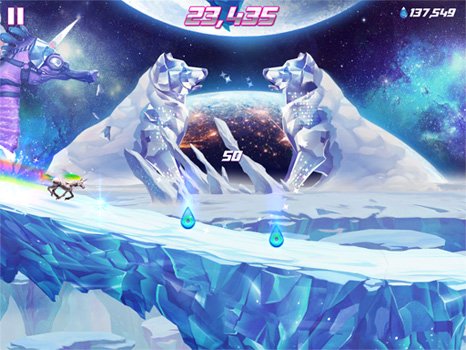 Every added element invites you back into the core game, where you lose yourself to the sights and sounds, literally chasing your dreams. And with the incorporation of community events, you feel a pleasant connection, touching the lives of others as they are touching yours. It’s a heartwarming thought to know that, rather than trying to eclipse someone else’s high score for your own self-satisfaction, you are working together for the benefit of the whole.

Nothing about this game can bring me down. Not even the curiously long load times when you open the customization menu — which I’m sure will be improved via update later down the road. Simply put, it lifts me like few other games have. And you too can be as content as I am right this very moment.

Robot Unicorn Attack 2 is happiness. It is hope. It is always. It is yours.