The term “roguelike” gets way too much airtime these days. If anything has permadeath, it’s instantly a roguelike. If it takes place in a dungeon — “roguelike!” But the original Rogue‘s core mechanical element was its grid-based gameplay, where every action by the player warranted an equal and opposite reaction, adding a puzzle element to the mix.

Road Not Taken operates very closely to the formula of the original Rogue, but doesn’t really hold that premise as well as it should throughout. 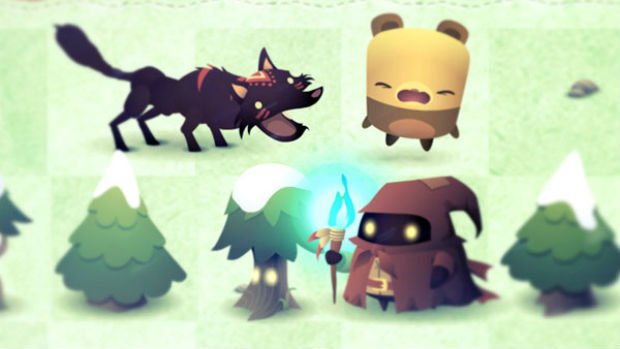 It’s very easy to get hooked on Road Not Taken right from the get-go. As a unique-looking creature not unlike He-Man’s Orko, you’re tasked by the mayor of a town with one job: protect the children of the land from getting lost in the woods. Yep, somehow, someway, a magical storm sweeps up kids once a year and deposits them in the woods, and you have to save “at least half of them” annually. You have this job for 15 years (levels), and then your task is done.

How do you complete this task? Through a combination of a grid-based puzzle setup and a “match” mechanic. You see, every “board” in each forest is comprised of objects like wolves, children, mothers, trees, and rocks. You’re free to move across a square at no cost, but once you use your powers to “lift” an object, you start losing stamina at the cost of one digit per square moved per object — so if you were carrying a child, you’d lose one stamina per step.

Your ultimate goal is to conserve stamina by throwing objects across the screen (or even between screens), so you technically don’t need to carry them unless you absolutely have to. To further complicate matters, sometimes you can’t physically move if you’re carrying a child and an obstacle is blocking your way, so you have to put them down, move some stuff around, and carry on.

As you can imagine, things can get a little complicated. If a board is full of objects it might take half your stamina to just move things out of the way, then you have to get the child back to their respective matching mother, or back to the start of the level. This sounds extremely straightforward, so where developer Spry Fox mixes things up a bit is through the various combinations of objects you can create by mixing (read: throwing) things together.

For instance, if you pick up a child who refuses to move, you can throw them into a fire and “create” one who follows you automatically without having to “lift” them constantly. You can combine certain ghosts to create a tool used to hack down foliage and the like, which you can in turn be used for something else. Some items can even be combined to create nourishing food (that earns you stamina points), and other more deadly enemies can attack you for a loss in stamina. It’s fun in practice, and makes you think quite a bit about what your next move might be.

There’s also a light communication element when you start each year in your new hometown, as you can trade currency such as coins, berries, rabbits, and rice to villagers for extra talismans that help you complete your jobs a little easier. It’s not rocket science as the game generally tells you what each villager likes and dislikes, but it’s a nice little way to connect to the world and earn something useful while doing so. The art style and whimsical music are the cherry on top of the cute presentation.

But what starts off as an interesting tale with a unique art style eventually becomes an exercise in repetition. It’s novel at first that most of the game’s nuances must be “discovered,” but once you start throwing around combinations willy-nilly a few hours in, your journal will let you know what’s what, and the actual equations aren’t all that complicated. By year five, the game also becomes extremely obtuse, to the point where it will scare off most casual players. 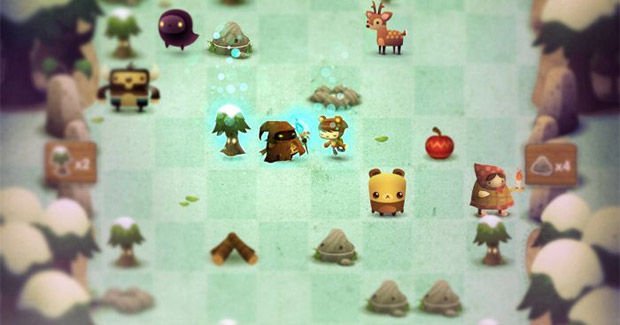 Now, I’m not saying the game is “too hard.” Sadly, instead of having players master combinations to get ahead gradually, the game basically packs every board to the gills with objects very early on — so much so that you can barely even move. The curve is far too steep and unbalanced, to the point where most players will pick up the game, adore the first few stages, and then promptly drop it once it reaches frustrating status. The kicker is that Road Not Taken has a permadeath system, where you’re forced to start from the beginning if you run out of stamina.

In case you’re wondering, you can only forgo the objective of “saving half the children” once, and although you can restart by way of a modified checkpoint shrine mechanic, you lose all of your items — which ultimately inches you closer to true death anyways. The game definitely could have benefited from a few different modes, most notably a creation tool or challenge gametype. Although each board is procedurally generated, there isn’t much to do once your task is done, as most levels tend to manufacture a feeling of déjà vu near the end.

When I first started playing Road Not Taken, I was completely enamored by its premise, style, and world. Slowly, bit by bit, I started having a little less fun as the levels progressed, as the game’s initial intrigue wore off a little more. That’s not to say it eventually becomes unplayable as I did enjoy the majority of the game, but make sure to bring extra patience along with you on this trip through the beaten path.