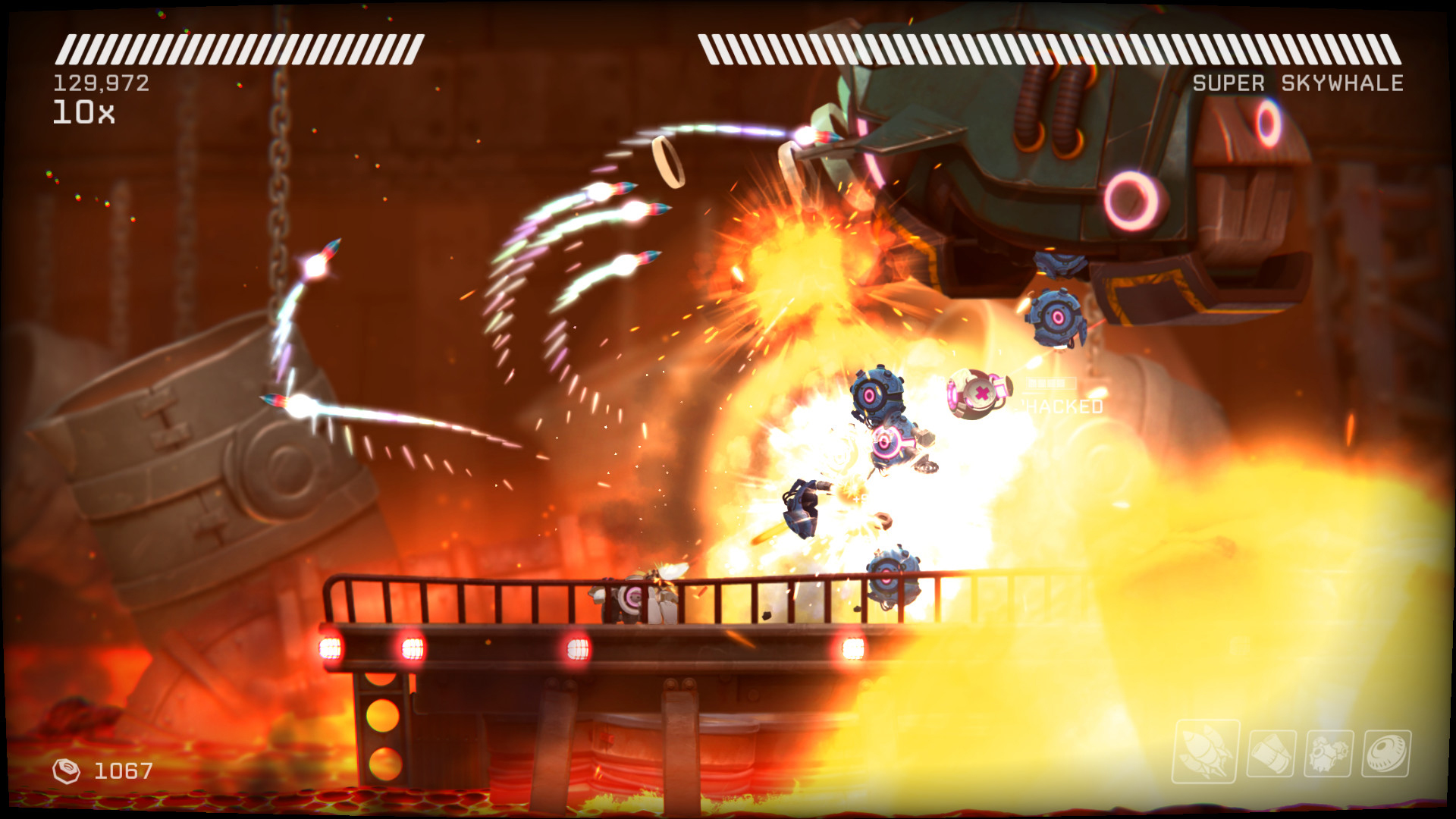 It’s weird for me to say I’m reviewing the final game from a developer. Two Tribes wasn’t sold, nor is it shutting down. After 16 years and a changing industry it just can’t keep up with, the team is just going to stop. Rive is supposedly the last game it’ll ever make, and in a way, I feel honored to review it.

Well, I would feel honored if it would just stop kicking my ass for a moment. 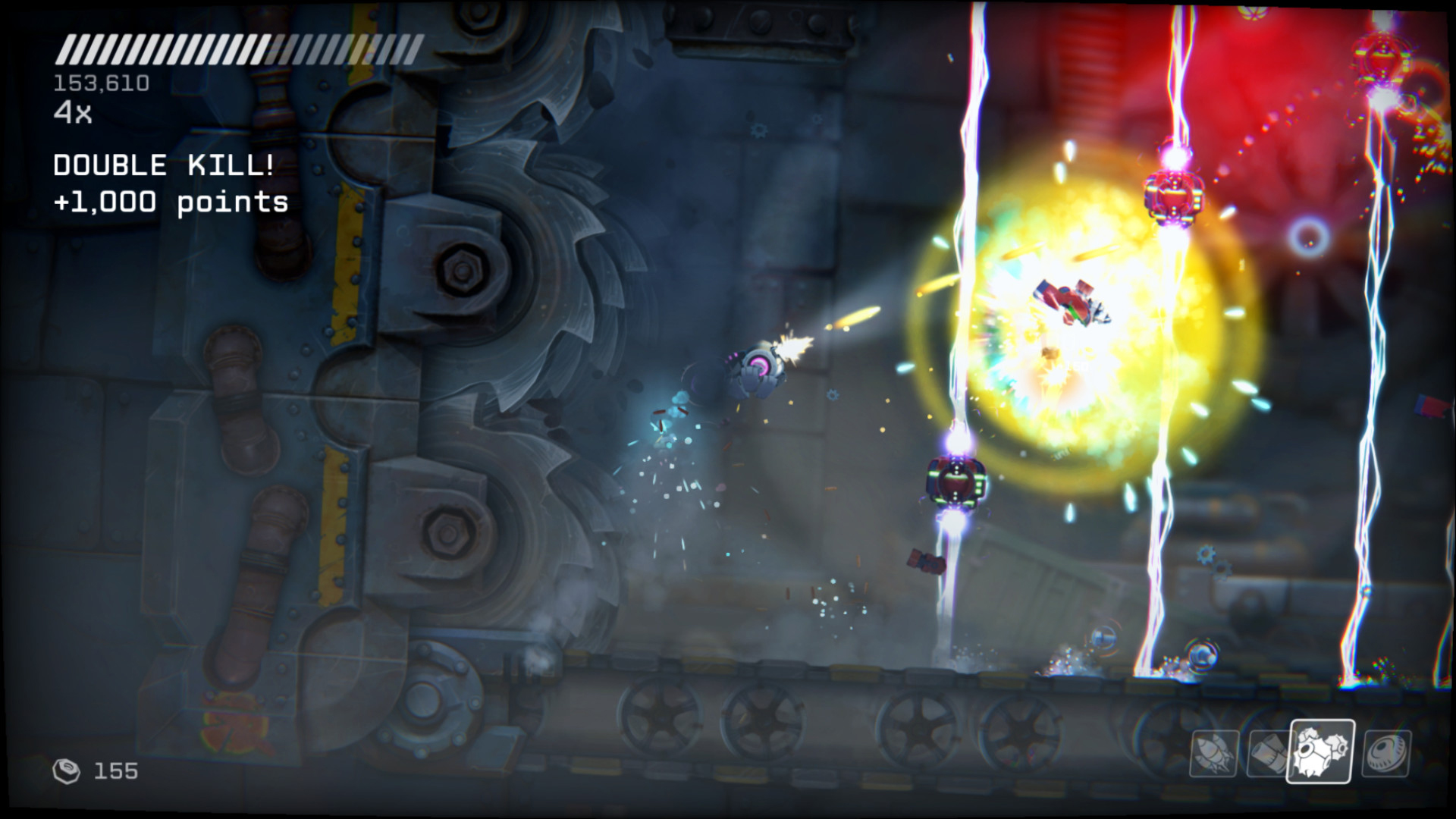 Rive is a twin-stick shooter/platformer hybrid that harkens back to the days of my youth when I had a roll of quarters in my pocket as I stood in line for the Robotron 2084 machine. Set aboard a spaceship filled with cockroaches and deadly robots bent on destruction, you play as Roughshot, a scrap metal scavenger and pilot of the Spidertank. After finding yourself stranded on the ship, you spend the next six or so hours blasting your way through winding corridors trying to escape so you can go home. The only other cognitive being on the vessel is Daryl Lloyd-Lancaster, the keeper of the ship and your main foil. Every enemy you encounter was created by Daryl and it really doesn’t want you to leave.

If that sounds a bit like the malevolent A.I. trope we’ve seen countless times before, know that Rive never really goes that deep into the concept. Daryl is fine, but it’s no GLaDOS. Roughshot and Daryl have a lot of back and forth with each other, coming off as a bit of an intergalactic Oscar and Felix. They both have a book of one-liners, spouting off twists on well-known quotes and showing their affection for meta humor. It’s all supposed to be humorous, but none of it really is.

Though the ship is interconnected, the game is split up into several levels. For most of it, you’re working your way to and from the warp room which is also where you can upgrade your Spidertank with new weapons and armor using the bolts you collect. Your main gun never changes, so I suggest you invest in these often because you’ll find out quite quickly just how handy a bunch of missiles or a shotgun blast can be.

There are just a few different types of robotic enemies on the ship. Most of them will just try to crash into you while others shoot heat-seeking missiles you can deflect. To survive, you have to keep moving, keep jumping and keep your eyes open. Getting hit does a lot of damage and I often found my Spidertank pinballing across the screen as I bounced from exploding robot to exploding robot until the “You Died” screen would put me out of my misery. When not dodging enemies, I was trying to avoid the many stage obstacles also trying to kill me.

You can make your journey slightly more easy with the hacking feature. A few of the robots you face can be reprogrammed to fight alongside you. Some of these enemies are more useful than others and there was many a pinch I was able to get out of with some quick hacking. These allies don’t last forever, either blowing up when you use them too much or after a certain amount of time. 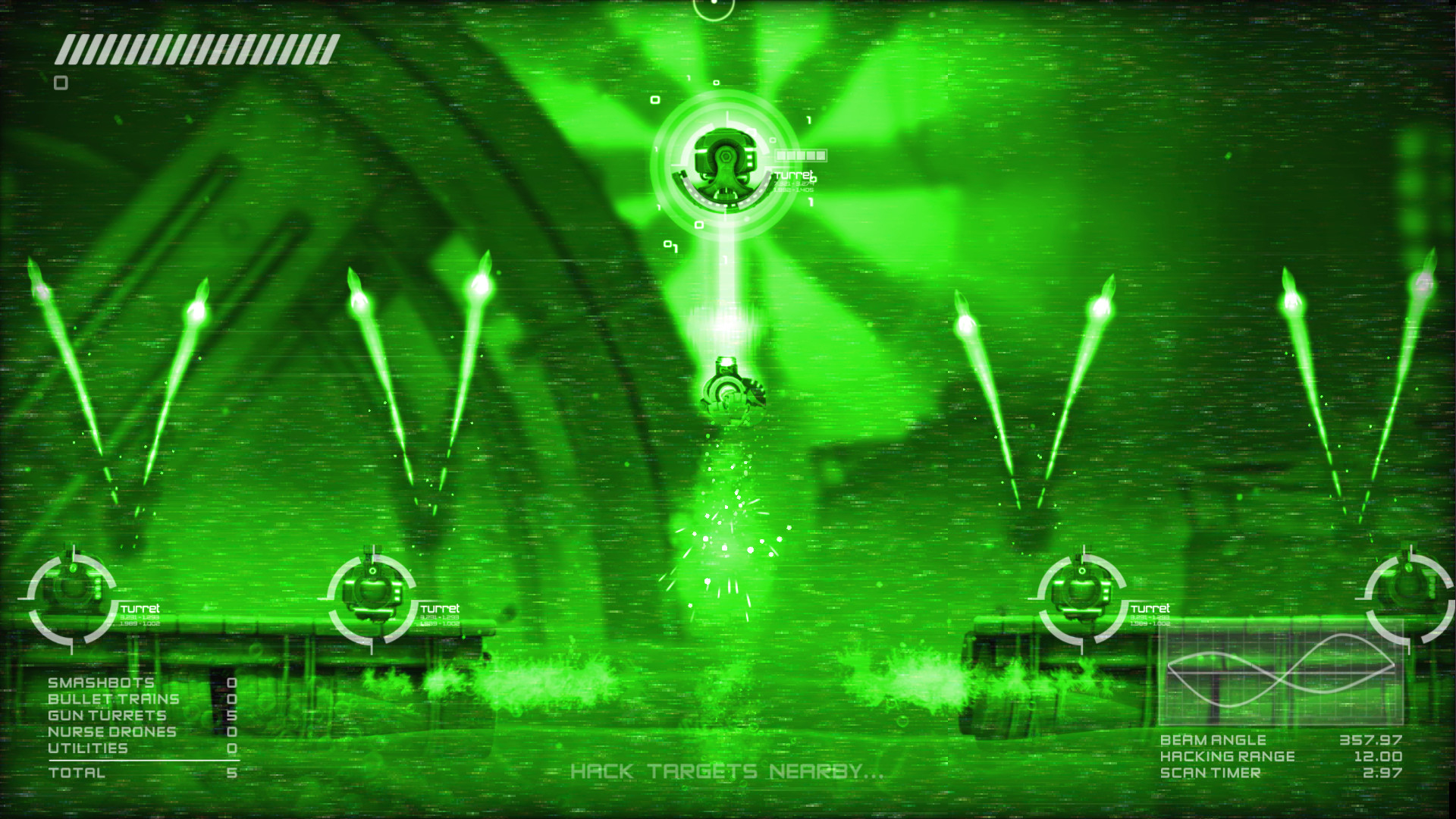 I suggest you get used to hacking as soon as possible because you’re going to need all the help you can get to make it through this. Good God is Rive tough. Much of the game is trial and error, getting wiped out by a fast moving swarm of robots that you have to remember for when you restart. Take my word for it, you are going to die a lot and the game will mock you for it.

I’m torn talking about the difficulty in this or really any game. If I criticize Rive for being too difficult, which I know many gamers will find it to be, I’ll be accused of just not being good at it. But I can’t ignore how trying it can be and it’s stupid to call a game good just because it’s hard. For me, I found one portion of the campaign to be “too hard,” forcing me to switch to the easier mode to get past it. Once I was clear of it, I was able to switch back to the standard hard mode without ever having to try it on easy again.

Whether you find the difficulty too much or just right, there are two design choices that I found needlessly increased the frustration. The first is checkpoint system. Rive is extremely generous with its checkpoints. They occur often and appear in the middle of some of the swarms you face. The way the system works is it takes a snapshot of the game the moment you pass a checkpoint. What this means is whatever immediately happens to you after you pass a checkpoint will most certainly happen again when you reload. Multiple times throughout the campaign I would hit a checkpoint and then be hit by some kamikaze robots. As soon as I restarted that checkpoint, I got hit again. I was usually able to get past this and move on, but sometimes there was no escaping injury or death. One moment in particular sticks out. I hit a checkpoint while I was in a pit with moving saw blades that I wasn’t able to get out of. Every restart would bring death no matter what I did, forcing me to abandon that checkpoint and restart the entire level.

The second frustrating design has to do with the controls. As a twin-stick shooter, I had both my thumbs on both PS4 sticks for the entirety of the game. Jumping is initiated with L2 and I found the trigger to be too much button for such a vital role. L1 would have been a better option as it and R1 did the same thing, but neither control set-up allowed me to change which button controls the jump. With so much of the game relying on quick and precise jumps, I wish more options were available.

Outside of those two issues, I was okay with the difficulty, even if my success in those struggling moments was never all that rewarding. It feels like it’s organic to the experience and the pacing does offer moments of respite between the swarms of death bots. The platforming segments were never too difficult nor particularly well crafted, and most I got by in a single try. I’m not going to remember those parts of the game, but what I will remember are the instances where Two Tribes really played with the concept. As you are in space, there are many points where you’re traversing a zero gravity environment, allowing you to just fly around freely and making the game feel a bit like Geometry Wars. My favorite segment locked my gun in the forward position and auto scrolled like a level straight out of R-Type. 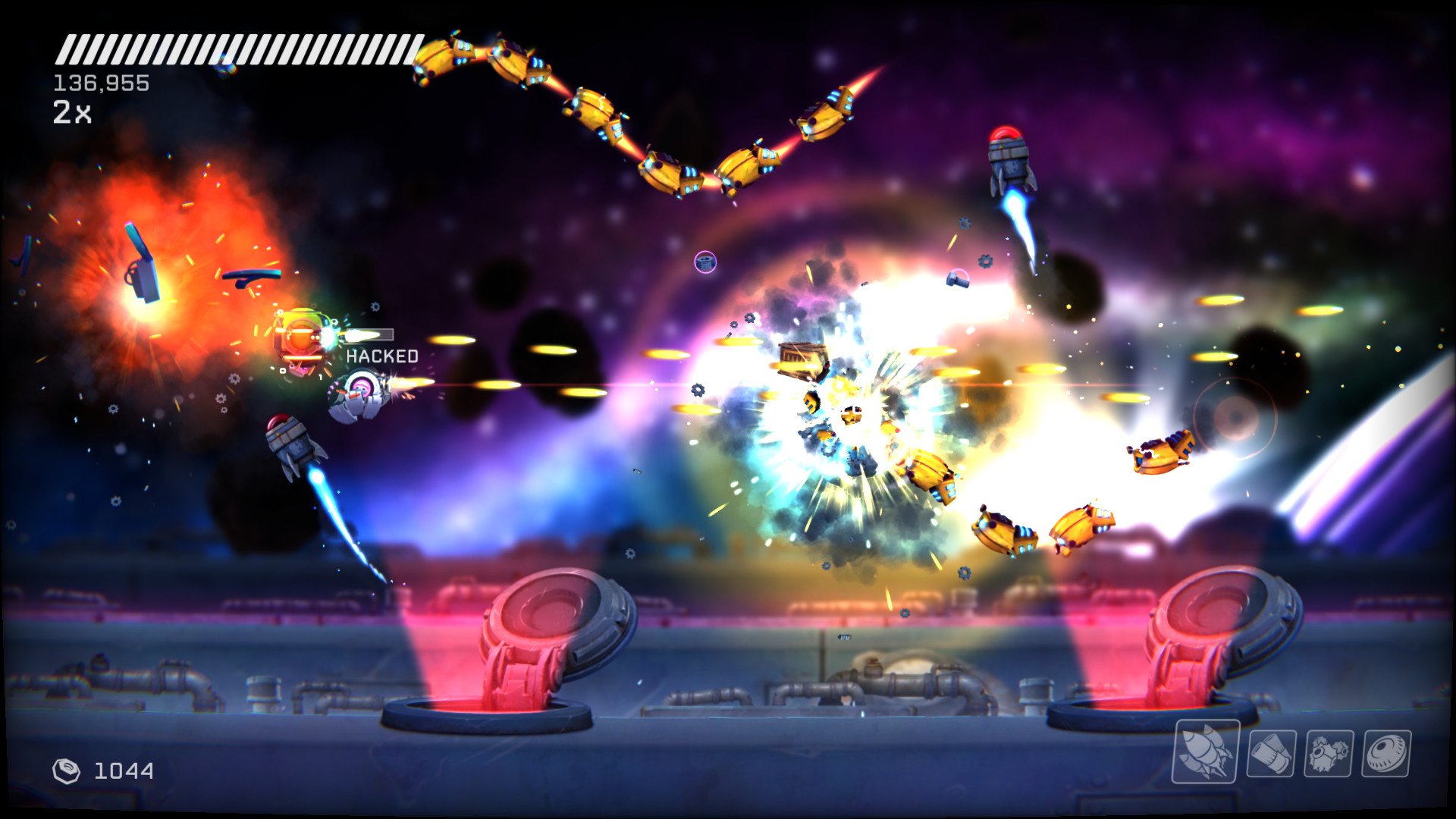 For completionists, all I can say is good luck. A single playthrough of the campaign netted me a handful of trophies with many of the remainders requiring absurd feats to collect. When you do beat the campaign, you’ll unlock a speedrun mode and a single-credit mode for the masochists out there.

As the last game Two Tribes will ever make, the few remaining employees there can hold their heads high with what they created. It’s not the best game in its catalog, and the difficulty will be a turn-off for many, but Rive leaves its mark as one of the more challenging games of this generation. Gluttons for punishment will have no trouble eating it up, but others should satiate their appetite elsewhere.