I wish I was a practical gent, especially when it comes to construction. Unfortunately, I can’t even put up a shelf without a lot of hassle, injuries, and the expectation of fanfare at the end. Thankfully, there are a number of games out there that allow me to flex my creative muscles with little or no knowledge of how to actually build things.

Rigonauts doesn’t just task players with building random stuff, however. No, it’s all about war machines. Vehicles of death and obliteration. On wheels, in the sky, shooting cannonballs and flames, the Rigo is a versatile vessel. It’s also run by goblinoid Hobs, the titular Rigonauts. The promise of goblin engineering was enough to make me intrigued, but does it offer more? 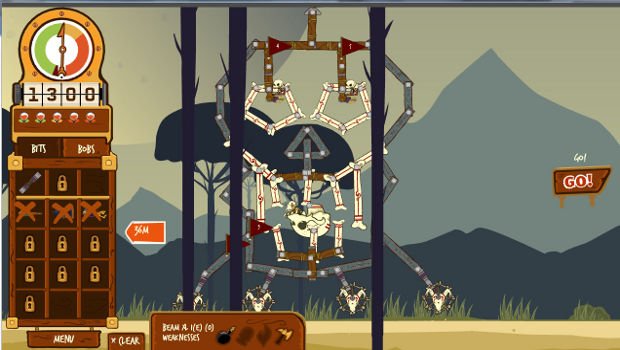 The Hobs of the Rigo are an oppressed bunch, and I’m sure we can all agree that’s a shame. Rather than accepting their fate, they built the Rigo to flee from their cruel masters. Easier said than done. Their masters are dogged buggers, and have sent numerous ne’er do wells after the little green fellows. The road to freedom is covered in enemies. The Hobs only hope is to keep blasting through.

That’s really all there is to the plot, though the various enemy leaders and the Hobs themselves are generally amusing scamps. The art style is low key and inoffensive, but I’m already starting to forget it. It’s accompanied by music that I can best describe as a pain in the arse; its repetitiveness is not saved by its jauntiness.

Each encounter starts with the Rigo unadorned. It can move, but it doesn’t have any weapons or armor. You can take as long as you like to rectify this and cover that vehicle in bits and bobs. In this instance the bits are objects like wheels and beams made out of a variety of materials that get unlocked, and the bobs are your weapons. 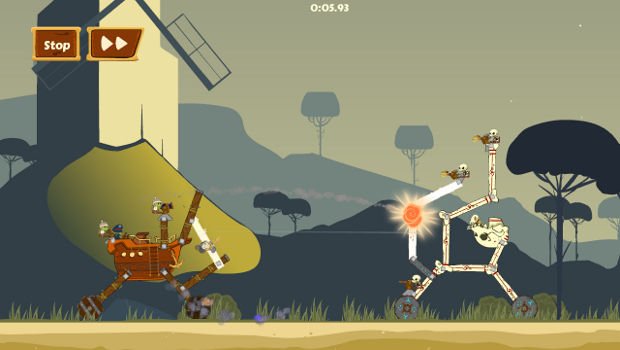 While the temptation to make a gigantic and intimidating engine of mass destruction is nearly overwhelming, the game puts a lot of limits on prospective mad engineers. Firstly, you can only build within a set location and it can’t be too big. The allotted square is a decent size though, and I only really felt that it restricted me when I was making flying versions of the Rigo. Secondly, there are quite strict limits placed on how many guns and materials you can use. That wouldn’t be so bad if your enemies were equally as restricted, but they are not.

Foes will attack with intricate creations, from vehicles that look like skulls, to a trio of mice. Some of them are absolutely huge. Despite this most of them fall pretty quickly, having weaknesses which are quite easy to exploit, and while players can prioritize targets, the AI doesn’t seem to do as good a job. In fact, I’m not even sure if they do anything other than aim at the core of the rig. 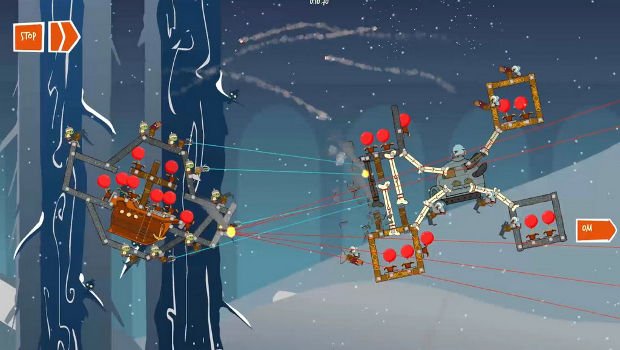 To progress through the game you need to collect stars. It’s always stars. I want to collect the entrails of my fallen enemies. To get these stars players must use as few guns and materials as possible. Since the battles are completely hands-off, the entire game is about building, yet you get a better score for not bothering. Most battles can be won using the same combination of weapons and defensive item placement, and it inspires a half-arsed approach that takes all the joy away from being creative.

That isn’t to say there’s no fun to be had. There definitely is, but the fun doesn’t come from playing the game correctly. My favorite battles all ended with me getting almost no stars. I’d spend ages making hilarious tanks, flying ships, and even a vehicle in the shape of an enraged pig. A pig, I should add, covered in laser cannons. Of course, this inevitably led to me replaying quite a few levels to grab the stars needed to progress. Have fun with a level, then do it again with zero creativity. That was my routine. Perhaps that is actually the way it’s meant to be played, but if that’s the case then it’s simply shoddy design. 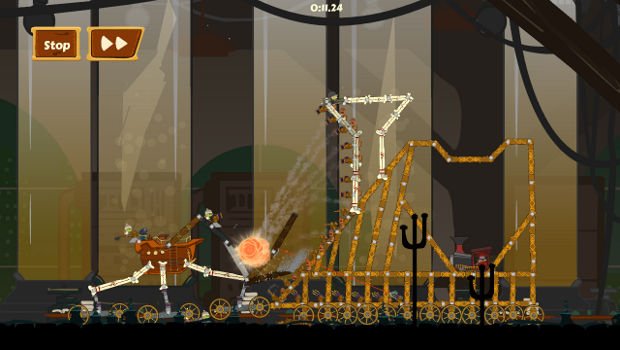 As the Rigo starts to face larger and even more heavily armed opponents, things do start to pick up. The battles don’t really have a difficulty curve, rather they spike or plummet. Some battles are obvious and easy, requiring little or no thought, and some requiring multiple attempts to figure out the best solution, all interspersed randomly. Foes do get more deadly, though. More gun slots are offered to deal with them, and the game starts to punish you less for going a bit gun crazy. My flying porcupine of flaming death really appreciated this.

Rigonauts has its fair share of potential, but the greatest issue is what the developers decided the challenge would be. It’s not from the easily exploitable battles and inept enemies, and it’s certainly not figuring out ingenious solutions to difficult obstacles. It comes from getting stars, and just keeping things simple. That’s not a challenge, it’s just boring, yet when I managed to ignore that, it charmed the pants off me. If you’re willing to ignore the annoying system the game employs, then there’s a few good hours of engineering impossible vehicles and general silliness.